Unless you've been hiding under an Infinity Stone, chances are you know a new land has opened in Disney California Adventure Park—Avengers Campus. Finally! Four years after the official announcement from Disney, fans can enter the immersive world of the Marvel Cinematic Universe (MCU) to meet favorite superheroes including Captains America (yes, plural), Iron Man, Thor, and Black Panther. As an MCU fan, I can't wait to catch rogue spider bots with Peter Parker and stuff my face full of Iron Man's preferred shawarma. But, I have to admit, I miss the previous tenants of the area; I miss A Bug's Land. I was secretly hoping Walt Disney Imagineers would do some sort of mash-up between the two lands; a magic stand-off between Manny and Dr. Strange, or Slim the stickbug giving his finest performance as a Dora Milaje spear. But, it was not to be, so I guess the best I can do is fondly remember Disney California Adventure Park's bug-sized colony.

DCA opened its doors in 2001 with four lands—Entry/Sunshine Plaza, Hollywood Pictures Backlot, Paradise Pier, and Golden State, which consisted of six individual sub-lands, one of which was Bountiful Valley and its Farm. The park's first year was challenging. Guests visited, then departed quickly leaving behind a list of concerns, including lack of characters, too many eateries and not enough attractions, and no specific district for the littlest guests. Walt Disney Imagineers went to work and construction began on the east side of Bountiful Valley Farm. Crews dismantled the backstage parking and cast member cafe to make room for a newly-themed land straight from Pixar's most recent animated release, A Bug's Life. The already existing "It's Tough to be a Bug" would be the anchoring attraction to the new realm called A Bug's Land. The concept was that Flik and his friends set up Flik's Fun Fair in the middle of the construction, so when you entered the district, you became a member of the colony and thus saw the land from the insects' point of view. 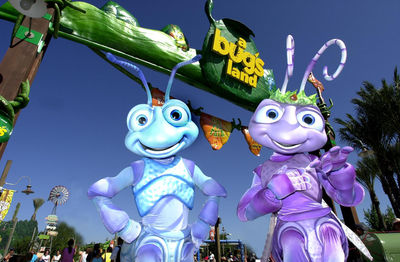 Opening in summer of 2002, A Bug's Land was an immediate hit for kids, who scuttled to Dot's Puddle Park to get drenched before even exploring the rest of the diminutive land. The remaining attractions included Tuck 'N Roll's Drive 'Em Buggies, Francis' Ladybug Boogie, Flik's Flyers, and the adorable Heimlich's Chew-Chew Train where everyone's favorite German-accented caterpillar took riders on a tour of his favorite foods. I can still smell the candy corn almost 20 years later! 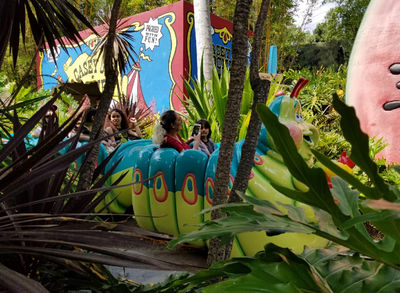 Heimlich's Chew-Chew Train was as entertaining as it was visually creative. A fan favorite was passing under the half-eaten watermelon bridge. Photo courtesy of Todd Pickering.

I opened DCA in store operations, but departed a few years later to stay home and raise a family. I was able to share A Bug's Land with my kids, watching them grow up splashing around in fountains at Dot's Puddle Park and riding with them crammed into one of the tiny buggies at Tuck 'N Roll's. (I'm not sure I miss the cramped legs). Heimlich's Chew-Chew Train was a must for us; traveling 1 mile-per-hour as Heimlich navigated the tiny track around pieces of partially consumed food. Personally, I loved Flik's Flyers, not necessarily for the continually spinning, but the innovative way Flik fashioned it together. The creative ant pulled together empty Chinese take-out cartons and animal cracker boxes as the seats, the extracting base pole was an empty pie tin and whipped cream container. Both of my kids clamored to hop on this attraction every time we visit. The final attraction was hosted by Francis the Ladybug; it was miniature version of Disneyland's Tea Party spinning teacups, but set to some bee-boppin' music orchetrated by Francis. A Bug's Land was a spec-ANT-ular area for kids of all ages, and will be missed. 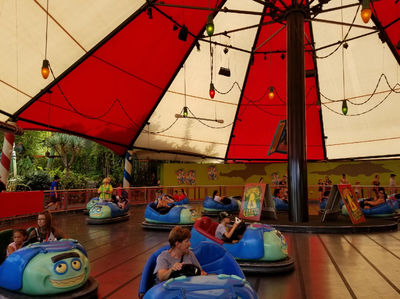 So Flik and the critters scurried away in 2018 leaving behind a web of possibilities for the Marvel-themed campus. Spider-Man paid tribute to his spider friends by moving into the former It's Tough to be a Bug theater, setting up his WEB Slingers lab. 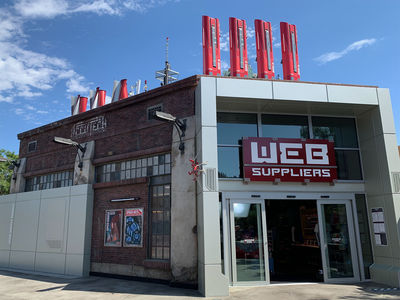 I wonder if there are any black widow spiders hanging from the ceiling in Peter Parker's new lab. Photo from MousePlanet archives.

But is that all that's left of A Bug's Land? Actually, Walt Disney Imagineers have continued to keep the former insect island alive since the first Stark Industries walls went up in 2018. Heimlich relocated to Pixar Pier with his Heimlich's Candy Corn Toss game. Taking over the former Casey at the Bat game, Heimlich's version challenges players to toss candy corn bean bags (now softballs) at a target which resembles the colorful caterpillar. Winners receive a plush Heimlich, Flik, Francis, or candy corn. The best part of the attraction is the original audio from Heimlich's Chew-Chew Train. With the help of some editing magic, players can still hear the late Pixar great Joe Ranft's voice as he gives life to Heimlich. There's more! Near the Games of Pixar is a familiar-looking attraction, but with a colorful paint-job. Inside Out Emotional Whirlwind is none other than Flik's Flyers! 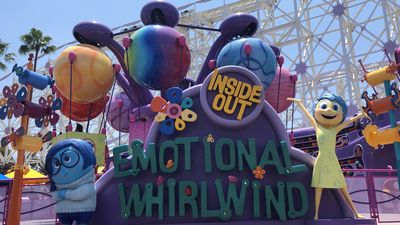 Although the flying raisin boxes and rice containers are now depicted with Joy, Sadness, Anger and the other emotions from Pixar's Inside Out, the attraction feels exactly like it did operating in Flik's Fun Fair. Photo courtesy of Todd Pickering

With Avengers Campus still so new, guests are still getting the feel for the superhero district, including looking for more tributes to the former A Bug's Land and even Bountiful Valley. So far, MousePlanet readers have identified at least two honorable mentions, both located in the Pym Laboratories. If you're visiting Pym's Test Kitchen, look closely at the hanging jumbo ketchup and mustard dispensers. You may notice a "BV" printed on the label, a nice nod to Bountiful Valley. Next door in Pym's Tasting Lab, be sure to examine the beer taps. Not only will you find fun props from A Bug's Land, but maybe a part of Hope van Dyne's alter-ego. 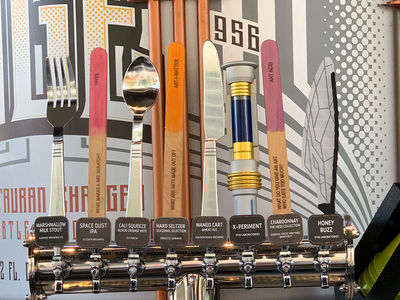 The stained popsicle sticks are a tongue-in-cheek reminder of the benches parked around A Bug's Land. These versions contain some insect humor. Photo from MousePlanet archives.

There are plenty of more surprises to uncover inside Avengers Campus. As much as I still want to see Heimlich winging above with the Spider-Man stuntronic shouting "I'm flying! And from up here, you all look like little ants," I know I'll still have a marvelous time. 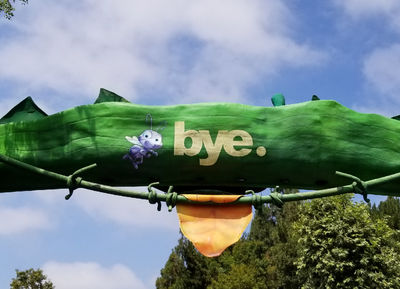 Gone, but never forgotten. We miss you, A Bug's Land! Photo courtesy of Michaelle Zumaya.