The original Star Tours most often (pretty much only) provided excursions to the forest moon of Endor. Some enterprising patrons will remember that a selection of other destinations could be booked through the agency. These places of interest were advertised by Star Tours when, apparently, they whisked tourists to them on a regular basis in their somewhat-trusty Starspeeder 3000. 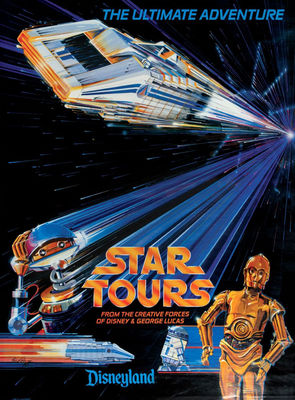 However, these hyperspace journeys were all but cancelled due to a near-disastrous incident involving a fateful trip to Endor under the piloting abilities of a newly assembled RX-24 droid on its maiden joyage. Official documents state that the pilot droid, "Rex," nearly wrecked the Starspeeder just leaving the docking station and then proceeded to veer off course in hyperspace and endanged the lives of the tourists by maneuvering through a storm of comets and engaging in a Rebel Alliance attack on an Imperial space station (rumored to be yet another Death Star). Though there were no fatalities, the damage Rex brought to the Starspeeder 3000 and the reputation of Star Tours, claiming itself to provide the "Ultimate Adventure," ended all operations for a time. 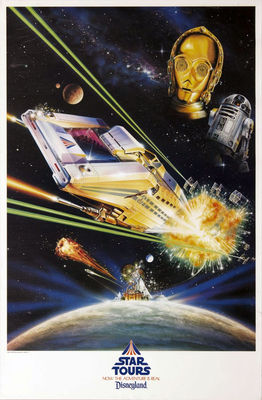 After the fallout from the Rex incident, Star Tours made a few improvements to their vacation transportation service. First, the RX-24 was decommissioned and replaced with a 3PO-series protocol droid that had at one time, along with a counterpart R2 astromech droid, worked on Starspeeder 3000 repairs. Second, the Starspeeder 3000 was replaced with an earlier, but more reliable, Starspeeder 1000 model. Third, Star Tours widened its offerings with new destinations across many popular spots in the galaxy.

Despite all the improvements, many travelers today forget about those original six desinations (some of which are still available on itineraries today) that still make for some amazing vacation experiences. Now that it's summer on our home planet, and many life-forms are considering their options for various getaways, let's look at the features of these sites that you may want to consider for you and your family to make some very special memories.

"Lightspeed to Endor!" as they used to say. Endor was certainly a popular spot back in the day, especially after the Empire's second Death Star was destroyed by the Alliance which effectively ended the Galactic Civil War. That history alone is worth a trip! 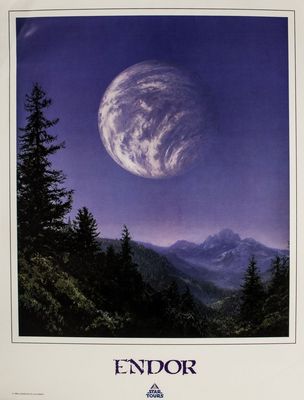 Destination Endor (1 of 2) vacation poster from the original Star Tours. © Lucasfilm and Disney.

Reasons to go – If you need the freshest air and the tallest trees in the galaxy, the forest "sanctuary" moon of Endor should be your stop! You will enjoy the quietest evning nights under the stars with the pleasant sounds of its native woodland creatures. During the day, hiking its trails in the woods come in all lengths and difficulties for everyone in the family as you can see and touch the giant trees and the vast swaths of foliage. As one R2 unit put it, "It's pretty here." 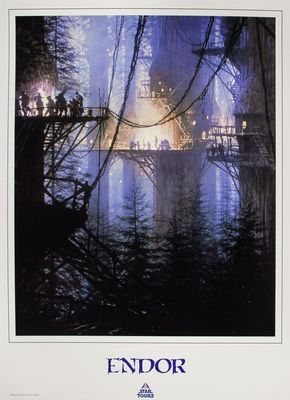 Destination Endor (2 of 2) vacation poster from the original Star Tours. © Lucasfilm and Disney.

Full disclosure – OK, so the Empire did once have a base there and the destruction of their shield generator scorched a large portion of their oldest forest, much of the land has recovered. While you can't see the old bunker anymore of the famed ground battle (it blew up, too), the landing platform that used to be guarded by AT-ATs still stands. Also, rumors of cannibalistic natives has been greatly exaggerated. Due to the kindness of a Rebel strike team, the Ewoks remain friends to the friendly. It's the Duloks that have been trouble but the Ewoks have fended off their efforts for decades, so you're safe there.

Bespin: "It's pretty far but you can make it!" used to be put into their advertisements but with the efficiency of newer trade routes it's an easy place to get to. It was out of the way for the Empire and so it remains a beautiful destination for anyone. 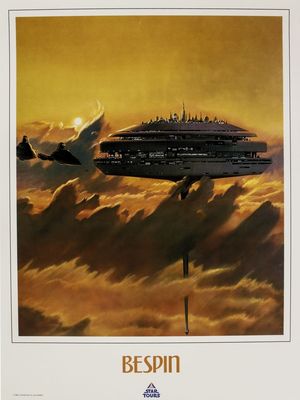 Reasons to go – Although Bespin is a bit gaseous, the atmosphere is safe (in its "Life Zone") and makes for the most beautiful sunsets and skyscapes in all the outer rim territories. Of note is the famous Cloud City once administered by the infamous General of the Rebel Alliance, Lando Calrissian. Once used as a tibana gas mining and carbon freezing facility, Cloud City now hosts visitors who want to get away from it all, including land. It floats in the heavens and makes for one of the more romantic spots anywhere. Be sure to get camtonos full of their galaxy-famous ice cream!

Full disclosure – Cloud City was once abandonded when an Imperial Garrison began to set up station there but they were since removed after the Battle of Endor. This does makes a good place for treasure-hunters since a lot of Imperial and Rebel items seems to have lost there. You must be careful on bridges and precipices since falling into the clouds means trouble. The good news is that Cloud City is one of the few places in the galaxy to include safety hand rails in its architecture.

This one is for the adventurous type who want to test their survival skills. Take what you can with you since there are no cities or technology, but that's the charm! The swamps of Dagobah provide unique experiences to those willing to take the chance! 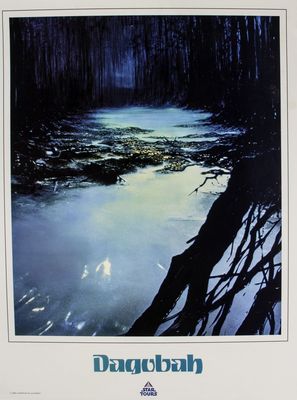 Reasons to go – If you want quiet and solitude, and you happen to love massive amounts of life-forms, think no further than Dagobah! Put your backpacking to the test and your camping aptitude to the best challenge. You can even visit the remains of the one-time home of Jedi master Yoda and even follow in the footsteps of the legendary Jedi Knight Luke Skywalker by running his training course: swing from vines, flip over trees, and enter the dreaded cave of darkness. You want an adventure for the un-faint of heart? Go to the Dagobah system!

Full disclosure – It's a swamp! If you were expecting food stores and indoor plumbing you're going to the wrong place. If you want the primitive experience, you got it, just know what you're getting into. The ground can handle the Starspeeder, but there are no official landing platforms. Be sure to bring water purifier, snake bite kit, and waterproof boots.

Zig, while others zag! Your vacation doesn't have to be in a warm spot! Cool down on the ice world of Hoth 6 and enjoy the best downhill skiing and tube sledding you've ever experienced! 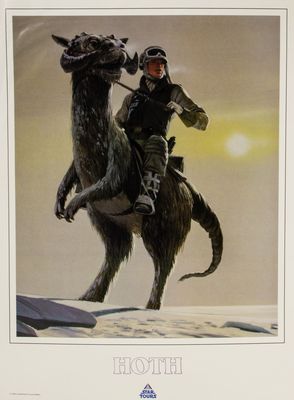 Reasons to go – Where to start? Did we mention the skiiing? Yeah, there's that. You can go sledding, too. The mountains are snow-capped and majestic. Oh, and there's tauntaun rides everywhere you go! Be undisturbed in the land devoid of human life.

Full disclosure – It's cold. Be prepared. You may have to adapt your clothing, and your lungs, to an extent. Even though you shouldn't go out at night, there's just so much to do during the day (like skiiing, as we mentioned above) that it won't bother you. If you're concerned about the yeti-like wampas, don't worry, they don't eat tauntaun.

Visit the planet of the twin suns! Ready to get the best tan of your life? 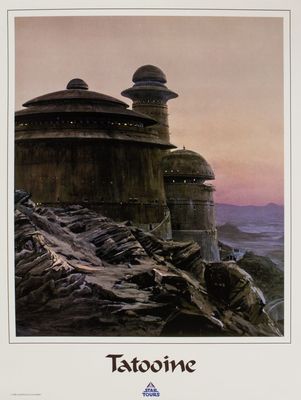 Reasons to go – Try the best local street cuisine in spaceports like Mos Eisley and Mos Espa. For you natural history buffs, see the plains of the krayt dragon skeletons! Speed across the rocky and beautiful Dune Sea. And catch a high-speed pod race—they're not just on Boonta Eve! Not only are the local foods quite delicious, you may know Tatooine best as the inspiration for modern-day cantinas! Some of the best mixed drinks and live music can be found here.

Full disclosure – While you may enjoy the freedom offered here—like open carry blasters and black market droid trading—some places can be a little rough. The little desert planet has been through a lot: eventually slavery was abolished there and it's no longer completely controlled by the Hutt gangs. Bring light clothing but don't worry about water, there are plenty of moisture farms around—their produce makes the drinks taste like no other.

Welcome to the jungle! If it's vegetation and ancient ruins you want, head to Yavin 4! 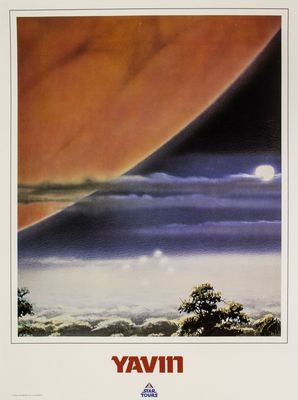 Reasons to go – Not only are the jungles and rainforests sights to behold, you are probably interested in the archaelogy of the great Massassi temples! Built more than 5,000 years ago, these massive stone structures hold lots of mystery and history. Not only were the Massassi adept at construction, their species left behind tales of war, troubles with the Sith, and eventually a secret home for Rebels. Come for the history and stay for the unbelievalbe view of Yavin Prime, the "red gas giant in the sky!"

Full disclosure – Actually, most of the architecture remains and the jungles and rainforests remain untouched. That means there are lots of dangerous predators lurking out there so stay in designated tourist areas, which doesn't away appeal to the most adventurous. But it's the history you want view, especially the remains of the Rebel's original secret base—however there is not much left since they evacuated in 0 BBY. Finally, the proximity of the red gas giant Yavin Prime, while being an awe-inspiring sight, does cause some odd variations in the planet's gravity. Like many vacations anywhere, don't expect to lose any weight here.

So, where will you book your next galactic vacation? Where would you most like to visit? We'll cover more destinations in the future, but in the meantime, book your travel plans now!