Walt Disney once said "Disneyland will never be completed. It will continue to grow as long as there is imagination left in the world." I get it. But do all the changes have to come in the same week?! If you've been following MousePlanet recently, you may have read some surprising announcements, including the tear-down of Gag Factory in Mickey's Toontown, and more recently, the shuttering of not one, but two restaurants. Say good-bye to Disney's Paradise Pier Hotel's PCH Grill, and, more shockingly, Steakhouse 55 and Lounge at Steakhouse 55 at Disneyland Hotel. Wait! What?! That was my restaurant. No more birthday celebrations among Hollywood's Golden Age stars? No more decadent desserts? NO MORE AFTERNOON CLASSIC TEA?! Be still my heart.

Granville's Steak House opened in 1983 as a fine dining option at Disneyland Hotel. Then-owner, Jack Wrather, named the plush restaurant after his wife, former child-actor Bonita Granville. One of the best kept secrets at the hotel, the eatery was refined with a full menu of steakhouse favorites like appetizers of stuffed mushrooms and French onion soup, followed by mouth-watering entrees of prime rib, broiled lobster, and salmon dinners. The facility closed in early 2006 only to reopen later in November with a new name—Steakhouse 55, named for Disneyland's opening year.

Steakhouse 55 and the adjoining Lounge at Steakhouse 55 retained the air of sophistication of Granville's, but added a flair of the Golden Age of Hollywood. Pictures of a dapper Walt Disney lined the entryway, welcoming you into an era of elegance. Large photos of famous celebrities dotted the interior—Bogie and Bacall, Mickey Rooney, The Rat Pack, and even Walt with Will Rogers, The muted tones and classic look of the interior transported you back to that bygone period. It was always fun to sit at different tables to view the young versions of Hollywood's elite. And for those faces not familiar, you could ask for a map of the who's who. 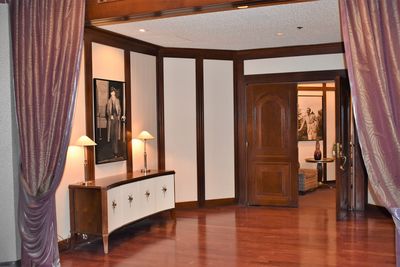 A styling and smiling Walt Disney beckoned you inside the Disneyland Hotel's premier dining location. Photo by Lisa Baxter.

Breakfast, lunch, dinner or dessert, Steakhouse 55 offered up some of the best bites on Disneyland Resort property. I only had the opportunity to eat breakfast once at the location; I ordered the smoked salmon eggs Benedict. But, I vowed to return after seeing the football-sized brioche French toast my son ordered. Dinner was more my vibe; I celebrated birthdays, anniversaries, or just met up with friends to enjoy a night out with some good food. Seared New York strips, garlic-encrusted lamp chops, or juicy prime rib. And the sides! The wedge salad dripping with dressing and topped with bacon and a soft-boiled egg, or the famed stacked of potatoes au gratin. But seriously, it was the dessert that called to me. The vanilla creme brulee, chocolate lava cake, and the iconic 24-layer chocolate cake all were worth a few hours of discomfort from eating too much.

I'm not a drinker, but The Lounge at Steakhouse 55 was a favorite of my husband's. He discovered a love for Moscow Mules at the stylish bar, which also served signature cocktails, brews, and snacks. I'd have my usual soft drink and we'd plop on the cushy couches waiting to be seated inside the restaurant. 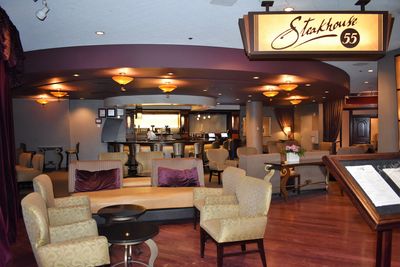 In 2016, Disneyland Hotel offered a new experience, or I should say former experience which was updated. Previously at Paradise Pier Hotel, Mary Poppins hosted a practically perfect tea for partaking. But the nanny was needed elsewhere, so Mary Poppins flew off and the tea party was put on hiatus. The special event returned, but without Mary and at a new location—Steakhouse 55. A lovely luncheon filled with an array of teas, served hot or cold, accompanying a tiered tower filled with finger foods, scones, and dainty desserts was an immediate success for the restaurant. The menu rotated to accommodate holidays and special events including 2020's "So This is Love: A Cinderella Celebration," commemorating the 70th anniversary of the animated feature. 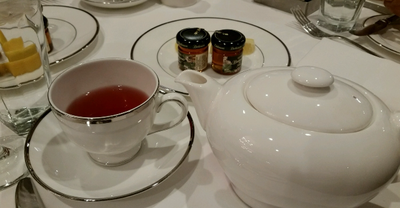 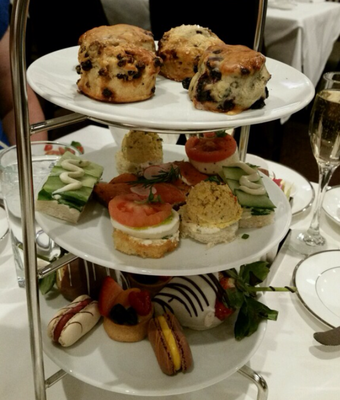 How to choose? It's recommended you eat from the top to bottom tier when served a tea soiree. Photo courtesy of Brandie Elizarraras.

Although Disney did announce intentions of looking to outside businesses to replace the vacant PCH Grill, nothing has been reported, yet, regarding the future of Steakhouse 55 and The Lounge at Steakhouse 55. Back to the Walt quote. "…[Disneyland] will continue to grow as long as there is imagination left in the world." I can't imagine Steakhouse 55 no longer anchoring Disneyland Hotel. But, as Walt Disney Imagineers take the reigns to create and bring us a new magical venue, I'll remember my date nights and tea parties at Steakhouse 55 with that Disney pixie dust. Thanks for the memories!