Popping in at The Disney Costume Pop-Up at Seattle's MoPOP

It's hard to get that Disney fix when you're two states away from your magical place. Luckily for me, a showering of that Disney pixie dust landed in the Pacific Northwest a few months ago by way of a spectacular exhibit featuring costumes from favorite Disney live-action films. Embarking on a national tour, "Heroes and Villains: The Art of the Disney Costume" chose Seattle's Museum of Pop Culture, known as MoPOP, as its first stop, giving Disney-lovers a peek at a selection of archived costumed masterpieces.

"Costuming is an essential element of storytelling, and Heroes & Villains exemplifies the richness of character we hope our films portray. It has been thrilling to collaborate with MoPOP's curators to bring a selection of the stunning pieces we have at the Walt Disney Archives to Seattle." -- Becky Cline, Walt Disney Archives Director.

The tour opens with 10 costume pieces from the Cinderella films—Rogers and Hammerstein's Cinderella (starring Brandy and Whitney Houston), 2015's Cinderella with Lily James and Helena Bonham-Carter, and Into the Woods with Anna Kendrick taking the titular role. From slippers to tiaras, the pieces are captivating, but none so as the fairytale dresses. 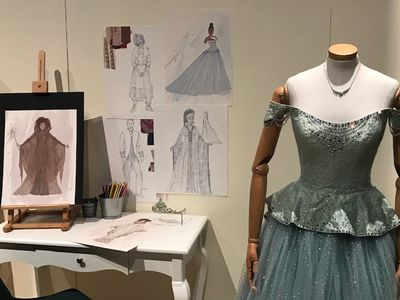 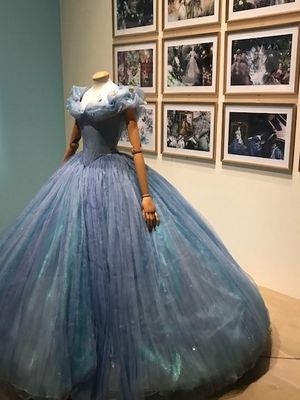 Lily James' celestial gown conveys a lightness and simplicity according to designer Sandy Powell. Nine different versions were used in the film using a total of more than 10 thousand crystals. Photo by Lisa Baxter. 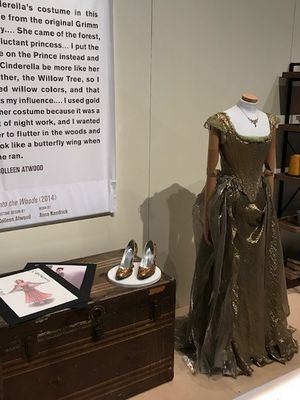 Designer Colleen Atwood took on the task of creating a stunning version of Cinderella's ballgown for Kendrick's Cinderella character. Photo by Lisa Baxter.

Also on display are Kendrick's gold shoes, and a trio of tiaras worn by each of the actresses in the portrayals of the fairytale princess.

What would any good bedtime story be without a hero? Whether rogue, royal, or rebel, the exhibit features several "knights in shining armor" as well as a few anti-heroes, or anti-villains. You decide. 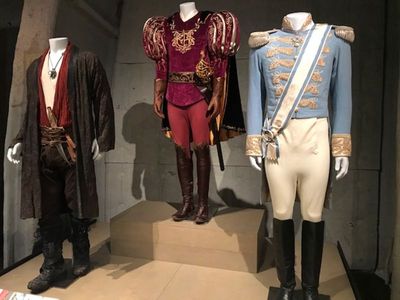 Fans of Once Upon a Time will be delighted to see the ensembles of two favorites on display–Evil Queen Regina Mills and the roguish Captain Hook, both whom started as villains, but redeemed themselves throughout the series. 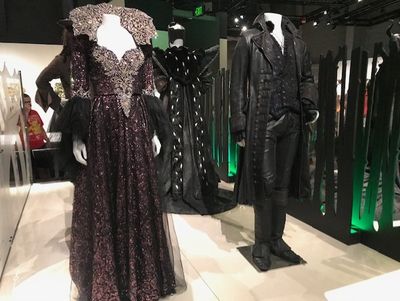 Designer Eduardo Castro designed much of the costumes for actress Lana Parrilla who portrayed Regina. Actor Colin O'Donoghue brought the incorrigible Hook to life with the help of Castro's talents. Photo by Lisa Baxter.

From one pirate to another, Johnny Depp's brilliant Captain Jack Sparrow is also on display. 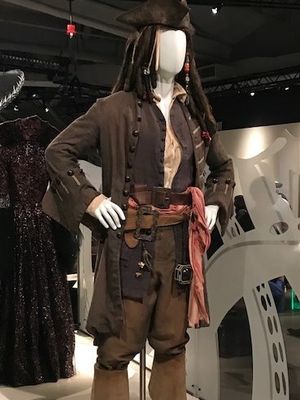 It's still undecided if Captain Jack is really a villain, anti-villain, or even an anti-hero. But decidedly so, Captain Barbossa wore the villain hat proudly in the Curse of the Black Pearl. In fact, according to Geoffrey Rush, who portrayed the captain, the hat made the costume: "I was like a glam rock star from another era. There was a pomposity, an arrogance and narcissism to him…the moment the hat came off, the character kind of disappeared". 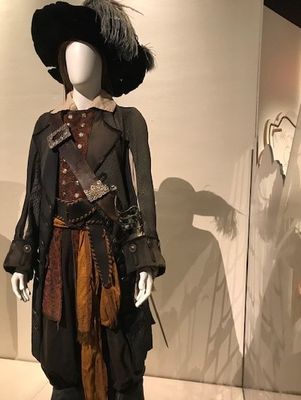 Captain Barbossa's caricature is in full plume with the help of Rose's elaborate costume. Photo by Lisa Baxter.

The Sanderson sisters made a rare appearance; it's not Halloween quite yet. Artist Mary Vogt worked on the costumes for the 1993 movie Hocus Pocus, basing the look and designs on the individual traits of the three sisters. Winnifred (Bette Midler) is portrayed as a "timeless magician," while Sarah (Sarah Jessica Parker) is more childlike. Kathy Najimy's Mary exudes a domestic aura, according to Vogt. 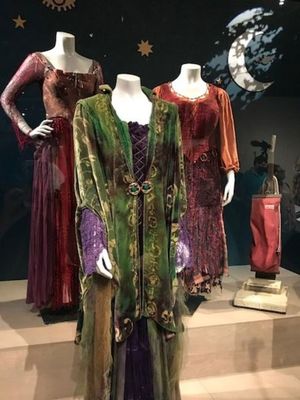 Note the vacuum cleaner next to the costumes; a humorous nod to Mary's choice of transportation. Photo by Lisa Baxter.

Other highlighted costumes included Belle's gown and town dress from the live-action Beauty and the Beast (2017), Angelina Jolie's Maleficent dress (with headpiece and staff), and costumes from A Wrinkle in Time and The Nutcracker and the Four Realms. The oldest costume in the exhibit is from our favorite nanny, Mary Poppins. Designed by Tony Walton and Bill Thomas, Julie Andrews' overcoat is a piece of Disney history! 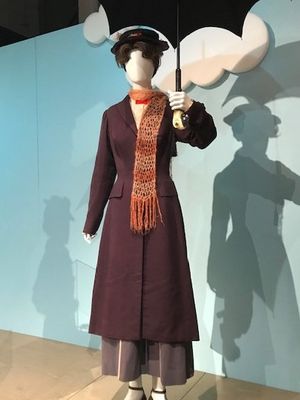 Fun Fact: Walton and Andrews were married at the time of the 1964 theatrical release. Photo by Lisa Baxter.

Overall, I enjoyed the display of Disney history. It may not be a ride on Disneyland's Pirates of the Caribbean, but seeing Jack Sparrow in costume was a delight. I highly recommend visiting MoPOP if near Seattle. "The Heroes and Villains: The Art of the Disney Costume" exhibit runs through April 17, 2022, before heading south to Tennessee.