"Lightspeed to adventure!" The locations and destinations of Star Wars are very important to the enjoyment of the franchise. Disney Imagineers created Black Spire Outpost on planet Batuu at "Galaxy's Edge" that would be the place to explore and experience Star Wars. However, the ships, transports, and fighters are probably more iconic than some of the locales in the movies.

Galaxy's Edge had to include the Millennium Falcon, the most recognizeable ship of them all. In the stories we know, we get to spend a lot of time on ships like that one, as well as enemy ships like the Star Destroyers. Now Imagineers and Disney resort lodging have come together for a new kind of immersive experience. The Galactic Starcruiser in Disney's Hollywood Studios park in Florida looks to be—to borrow the phrase—a wild ride! 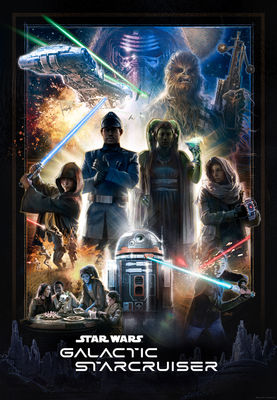 Just look at the above poster. The Halcyon, the starcruiser in the upper-left corner, is the one you will board for your stay. But it's not a typical stay—you'll be "travelling" lightspeed to spots across the galaxy while you rest in your futuristic bedrooms, eat at exotic restaurants (the "Crown of Corellia Dining Room") with Twi'lek service (bottom-left corner), train to deflect lasers with your lightsaber (bottom-right), get help from Chewbacca, foil the plans of Kylo Ren (top right and middle), all while playing your part in the adventure—that could be you in the middle of it all.

Like the movies, this is a fantasy long-awaited, perhaps "something out of a dream," as Luke once said. To think that this starts next year and they're going to be taking reservations is crazy. To walk around in, to touch and feel Star Wars, will be so much more than a ride or what we now think of as an "attraction." I'm excited and amazed for sure, but I'm also wondering just how all of it works.

Well, to hear Imagineers talk about it, it it something that came out of their dreams, too.

Here are the highlights from that video:

For more details about these highlights, you can head over to www.starwarsgalacticcruiser.com.

The ronto in the room of course is the price and sticker shock that trended on social media when this information came out earlier this month. What can I say about it? It's expensive but it isn't just a hotel with decorations, or just a cruise ship with themed rooms. You hear things like this is first-of-its-kind and unique and immersive and original and it seems to be all those things. This is something that truly you wouldn't be able to experience anywhere else. How do you calculate that price and translate it to your guests? Insert "we could almost buy our own ship for that," jokes here.

With those prices, who are your guests going to be? Will people speak with their wallets and flood reservations or will it be lukewarm? They're banking a lot on this and counting on wide acceptance. Maybe prices will adjust favorably over time (not likely) but if not, saving money over a long time may be the way most people make plans to attend.

As for me, it would be a great experience—but I have questions, like are the interactive aspects better suited for kids? I know as an adult I'd like playing along and "going on a mission" and feel like a kid again, but would I be taking that spot away from a kid? Do things happen in the middle of the night or do we get peaceful sleep? The idea of Star Wars music and dinner shows kinda crinkles my skin when I think about it, but I haven't seen the shows yet. I mean, if they did something like that opera scene from Revenge of the Sith but Anakin and Palpatine were there, that would be something. Meeting other Star Wars fans there would also be rewarding. Only time will tell if I go on the voyage before or after retirement but it's on the bucket list already!

One of the coolest aspects of this whole experience is how Disney plans to keep guests in the Star Wars realm without "breaking" the story. You go from entering Disney World and then straight to your Star Wars experience and for two days and nights you can be completely immersed in that realm the entire time! Personally, I think I'd almost rather be a cast-member character on this Starcruiser and help make that magic happen, but I'd certainly like to experience both sides somehow/someday. Perhaps that's the post-retirement plans...

For more details on the accommodations and prices, check out Alan Dalinka's recent Walt Disney World Update on MousePlanet.