From ticket books to day passes, annual passes and FastPass+, the way visitors have accessed the Disney theme parks and its rides has changed several times since 1955. It's all about to change again, as Disney prepares to debut its new Disney Genie service at Disneyland and Walt Disney World sometime this fall, and introduces a replacement for FastPass.

How much this will change your theme park experience will depend in part on which Resort you're used to visiting, and how much you're willing to pay to access new premium features.

Disney Genie is the next generation of digital planning tool, which the company says "takes the guesswork out of 'what's next,' so that visitors can spend less time in line and more time having fun with friends." Disney Genie is free, and adds new features to the existing Disneyland mobile app and Walt Disney World's My Disney Experience app to help visitors plan a customized itinerary for their visit. 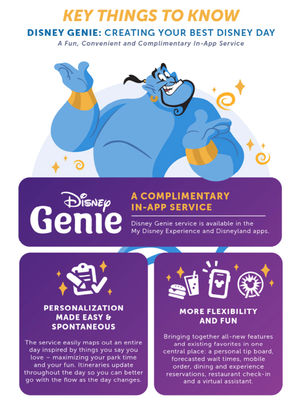 "Disney Genie listens to the preferences that guests share with us to help design their best day and deliver an experience that’s made just for them. Pairing incredible technology with more than 60 years of expertise about how our guests visit the parks, Disney Genie will personalize their Disney day, allowing guests to spend less time planning and waiting and more time doing the things they love.”

During a short video presentation Wednesday morning, Disney demonstrated how to use the My Disney Experience/Disneyland app. By setting your preferences for the attractions, dining and entertainment offerings you want to experience,  Disney Genie creates a customized itinerary, and updates it throughout the day to optimize park time. You can choose to be very specific by selecting the exact rides, restaurants, and shows, or enter more generalized interests like "Princesses" or "Star Wars" for a themed itinerary. One new change is that the app will feature a personalized tip board to display current and predicted wait times at the attractions you may want to visit, to let you see when a line might be shorter.

As before, the My Disney Experience/Disneyland app will offer the ability to make place mobile orders at participating restaurants, join a virtual queue for select attractions, and make dining reservations. Disney Genie will incorporate any existing reservations into your itinerary, so you don't miss your time at Savi's Workshop or lose your table at the Crystal Palace.

With this new offering, Disney is officially retiring the Fastpass, Fastpass+, and MaxPass services at the domestic theme parks, and replacing them with a new access known as Lightning Lane. The Lightning Lane is a separate attraction entrance, similar to the former FastPass entrance, which offers a shorter wait time. There are two ways to get access to the Lightning Lane, and both of them come at a premium. 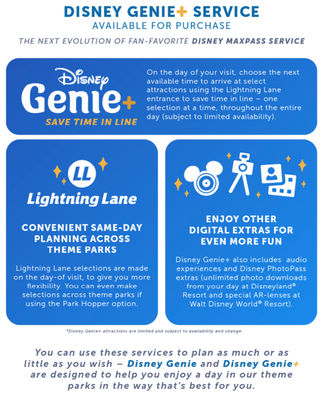 Disney Genie+ is the next generation of the MaxPass service formerly offered at the Disneyland Resort, and will be expanded to the Walt Disney World Resort to replace the Fastpass+ system. Most of the attractions that were previously available through MaxPass/Fastpass+ can be reserved through Disney Genie+, but the company has yet to release a complete list.

Unlike Fastpass+, Disney Genie+ is a same-day service, which means you no longer have to choose your rides 30 or 60 days in advance. This is how MaxPass always worked at the Disneyland Resort, but it will be a huge change for Walt Disney World visitors (if you like to plan ahead, you still get to decide where you want to eat dinner in two months).

You can hold one attraction reservation at a time throughout the day, and make a new reservation once you've used or canceled the previous one.

Depending on which Resort you visit, Disney Genie+ comes with bonus features. At the Disneyland Resort, Genie+ customers receive unlimited Disney PhotoPass digital downloads from their visit. Walt Disney World Resort visitors can play with augmented-reality lenses through the app, and see Disney characters animate in their photos. 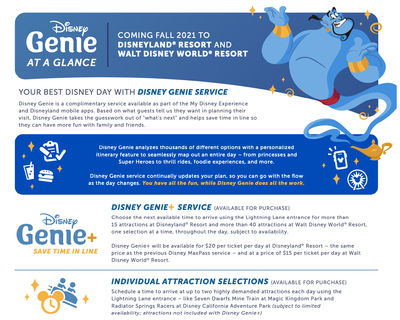 The second premium offering is a version of the Disney Premier Access service introduced earlier this month at Disneyland Paris. The domestic version doesn't have a fancy new name—Disney refers to it as Individual Attraction Selections—but the idea is the same: Pay to play.

Disney Genie+ users can choose to purchase access to the Lightning Lane for up to two "high demand" attractions per day, like Radiator Springs Racers at Disney California Adventures, or Seven Dwarfs Mine Train at the Magic Kingdom. Beyond these two examples, Disney only said that rides available as Individual Attraction Selections are not be the same rides as are available through Disney Genie+, but they may include attractions that currently use a virtual queue. If you're not lucky enough to get into the virtual queue for Rise of the Resistance, you may be able to pay to get into a boarding group.

Individual Attraction Selection pricing will vary by date, attraction and park, and is expected to be announced closer to launch. Disneyland Paris uses dynamic pricing for their offering, which even changes throughout the day depending on the length of the standby line. These passes can run up to $20 in U.S. dollars, and it's not a stretch to see that happening here, too.

Even with these changes, it's still possible to visit Disneyland or Walt Disney World without paying for premium access. Disney will continue to offer standby lines for most attractions, just as they did when Fastpass launched. And we're back to having five tiers of attractions:

It's this last tier that gives me pause. When the virtual queue for rides like Rise of the Resistance fill up in seconds, there's clearly a capacity issue. Disney will have to divert some of that already-inadequate capacity to offer paid Individual Attraction Selection access. How Disney manages that—and how much inventory they divert from free virtual queue to paid Lightning Pass—remains to be seen, but it's not a stretch to expect the virtual queue to become much more difficult to join once this new system rolls out.

With the debut of Disney Genie+, Disney will also introduce a change to the Disability Access Service. Disney didn't provide many specifics about the new program, but one positive change is that visitors will be able to pre-register for DAS before their visit, and even make some attaction selections before they arrive. We will provide updates to the changes to this service as we learn more.

Disney Genie+ will do the same, and it's far too early to know how much it will impact your next visit. I'm hopeful that the upgrades to the Disneyland/My Disney Experience apps really do provide a much greater degree of flexibility and spontaneity for park visitors, and will actually let us put our phones down and enjoy the friend and family around us.

If you want to dive into the nitty gritty of the new offering, Disney has a 14-minute overview of the new services.