I haven't made it down to the most magical place on Earth since the start of the pandemic, which is kind of depressing. That said, you can never keep a good shopper down, and thankfully I've been able to obsessively look online at all the goodies Disney is putting out there to help us celebrate Walt Disney World's 50th Anniversary.

The offerings, as usual, range from the incredible to the fun and silly. Mileage may very based on your own taste, of course. Today were going to talk about how the goods are being organized by Disney, and then I'll call out a few prospective purchases that you might enjoy, including a few must haves for me, including some that are already playing hard to get.

My first impression of the offerings is generally a good one. There's a ton available at every price point and for every type of fan, whether you love clothing, pins or toys. I'd kind of like to see more collectibles (artwork, figurines, etc), but I have a feeling a visit to Art of Disney when I get down there (fingers crossed next month if my plans don't get canceled again) will solve that problem. This is also an 18-month-long celebration, so I'm sure the product rollout will continue as things sell out and new attractions open (Tron Lightcycle helmet anyone?).

Disney has organized the 50th anniversary good into five different "collections," each with its own theme. These include:

The Celebration Collection – these are your standard logo items, described by Disney as "a way to show that world that you were here."

The Castle Collection – there's a ton of merchandise featuring the celebration's castle logo. Clothing and mouse ears are the thing here, usually in tones of gold and blue that are reminiscent of Cinderella's Castle itself.

The Vault Collection – frankly, this is my favorite. Think retro. Merch from this collection features the original park logos and color schemes from the 1970s and 1980s. As per Disney, it's a way to go back to opening day in 1971, at least in spirit. There's clothing, of course, but also collectibles, bags, tableware and many others.

The Earidescent Collection – Disney's way of letting you "wrap yourself in the shimmer of the world's most magical celebration." This one's all about the clothes, and in keeping with the incredible new lighting given to each of the parks' main icons, the items' ears each emit their own kind of glow.

The Luxe Logo Collection – the place for higher-end apparel and accessories, this is the fancy stuff. As per Disney, this one sets the gold standard.

There are more items than you can count, but let's take a look at a few things that caught my eye (and wallet). We are going to start with my must-haves, followed with the should-haves, want-to-haves, and the we'll-see-about-thats).

First up is the item I'm lusting after, and sadly can't find as of the publishing of this article. To be clear, I want this watch! 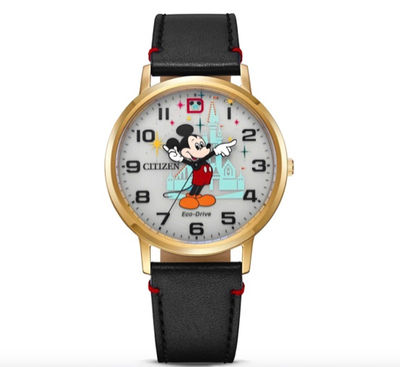 My readers are well aware that I collect Disney watches (preferably with a large mouse on the face), and Disney Parks typically partners with a fine-watch maker to create watches to commemorate special events like park anniversaries. Walt Disney World's 50th is no exception. Disney teamed up with Citizen to produce an Eco Drive watch. It has the simple retro-face of a Vault Collection item, and features Mickey Mouse in front of a stylized Cinderella's Castle. It's in the classic Mickey style, with his white gloves as the hands of the watch. It has a gold-tone case and black leather strap.

If you're unfamiliar, Citizen's Eco Drive watches are essentially solar-powered (though are actually powered by any light). If you keep them out in the open, they'll keep going indefinitely without the need for a battery. The only downside is if you're like me and like to wear a different watch everyday. My Eco Drive watch often sits in a drawer while I wear other watches, so it stops running, starting again only when I take it out for a day or so.

The watch retails at Disney for $325 if you can get your hands on one. Best as I can tell, the pre-order sold out quickly, and it's not yet available at the parks. Someone out there please correct me if I'm wrong, but I have my eyes peeled, and—mark my words—it will be mine! If you're even less patient than I am, they are available on eBay for the usual markup.

My other must-have is what appears to be the definitive guide to Walt Disney World's first 50 years. This was also hard to get, but I managed to find a copy. 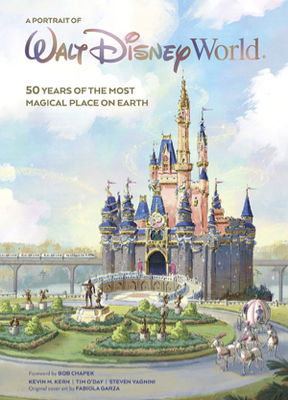 The full title of the large coffee table book is A Portrait of Walt Disney World: 50 Years of the Most Magical Place on Earth, a mouthful, but a fairly accurate mouthful. The book's 320 pages are loaded with stories about the World, going back to the opening of Disneyland and the early days of the Florida Project. It's loaded with concept art and photographs of the layout of the different parks, hotels and recreation areas, as well as the attractions.

It was written by Kevin M. Kern, Tim O'Day and Steven Vagnini, three Disney historians I've been following for a long time. These guys know their stuff. There's also a forward by current Disney CEO Bob Chapek, who recently rededicated the park.

In my mind, this is a must-have for any Disney Parks fan, because it gives a definitive history of the place straight from the horse's mouth. Particularly with the stories and concept art, they have access to things we mere mortals (and fan sites) don't.

The prices vary depending on where you get it. The current prices are as follows:

My spies have also told me they've seen the book in the parks. The thing, though, is that it's also been in and out of stock at all of the above. As of this writing, Barnes and Noble (where I got my copy) had it in stock, but shopDisney and Amazon didn't. Keep checking using the links above. You'll get it eventually. If you love the parks, I'd recommend you do.

An added bonus if you get your copy from shopDisney is that for every book purchased from now through December 31, 2021, Disney will donate a book to First Book, a non-profit organization dedicated to providing new books and educational resources to educators who serve children in need.

Next up, you knew LEGO had to get in on the 50th game. I've long been a fan of the LEGO versions of Cinderella's Castle. The only issue is that they cost over $300 and are the size of a small regular house. 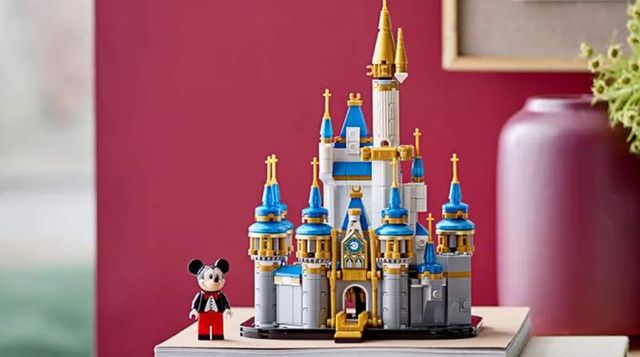 For the 50th, LEGO created a special version of their Cinderella's Castle set, with a 1970s version of Mickey Mouse standing watch out front. It's very cute and a more manageable version of the traditional LEGO castle (8 inches high and 5 inches wide when fully assembled). It's designated for those 12 and over and has 567 pieces. From a design perspective, it has what they're calling "pearlized" golden tower tops and "opalescent" blue rooftop cones. It's a nice stylized version of the castle, and I like the vintage Mickey Mouse figurine touch.

The 50th anniversary version of Cinderella's Castle is currently available on shopDisney.com for $39.99 (and purchases are limited to 2).

If you suspected that there would be a wide variety of clothing and accessories available for the 50th as well as collectible items, you'd be correct! There are tons of sweatshirts and T-shirts and footwear, oh my. So that I don't completely bore you, I've selected a couple of items that stood out to me.

I've had a thing for hoodies lately, so of course, that's where my eyes went first. Lately, Disney has produced a lot of vintage style clothing that I've really liked. They all have those 1970s and 1980s-era logos in what are now considered weird colors that appeal to those of us who grew up in the 1970s and 1980s. I'm dating myself here, since I like those colors—especially that mustard yellow we're seeing these in. Falling right into that wheelhouse is a 50th anniversary logo hoodie from the Celebration Collection. 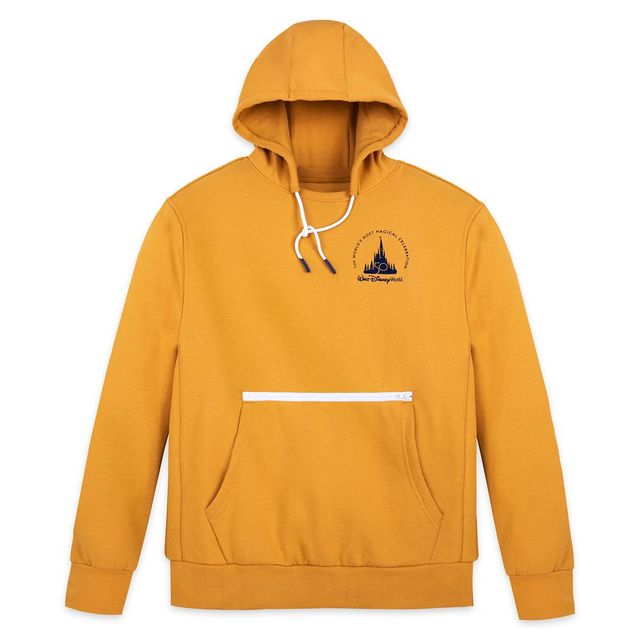 This anniversary hoodie, in a color that reminds me of my childhood, is available at shopDisney.com. ©Disney.

The sweatshirt is heavy and has a feeling of a nice fleece blanket. The front is subtle, at least by Disney standards. It has a small 50th anniversary logo near the shoulder and the words, "The World's Most Magical Celebration." It also has a big pocket in the front to keep your hands warm while waiting three hours on line for Rise of the Resistance. 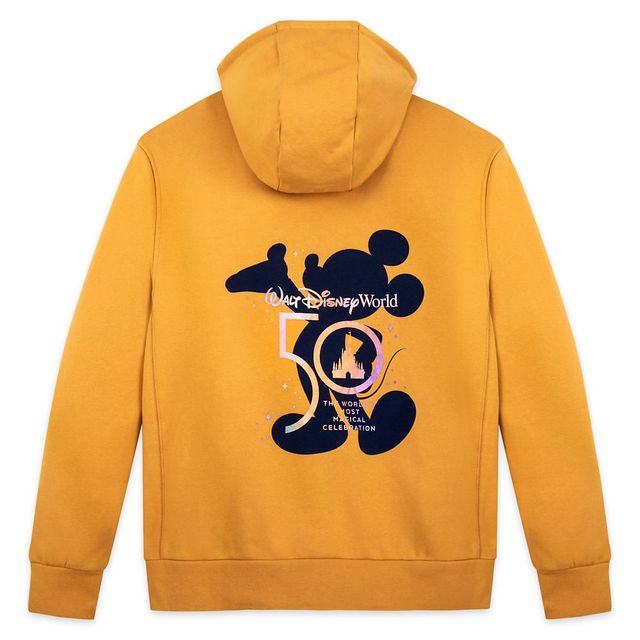 The back of the hoodie features Mickey Mouse and some Earidescent flair. ©Disney.

On the back, you get a big Mickey Mouse silhouette and as per Disney, a Walt Disney World 50 logo and pixie dust in iridescent metallic ink. All in all, it's an attractive big comfy, if expensive, sweatshirt that's a little different from what you'd normally see—which I liked.

This hoodie is available on shopDisney.com for an admittedly pricey $59.99 and has also been seen at the parks.

We're going to head now from the top of the body to the bottom and look at our feet. I'm not a big Crocs wearer, but I know many people are. Disney has that fanbase covered with a pair of commemorative Crocs. 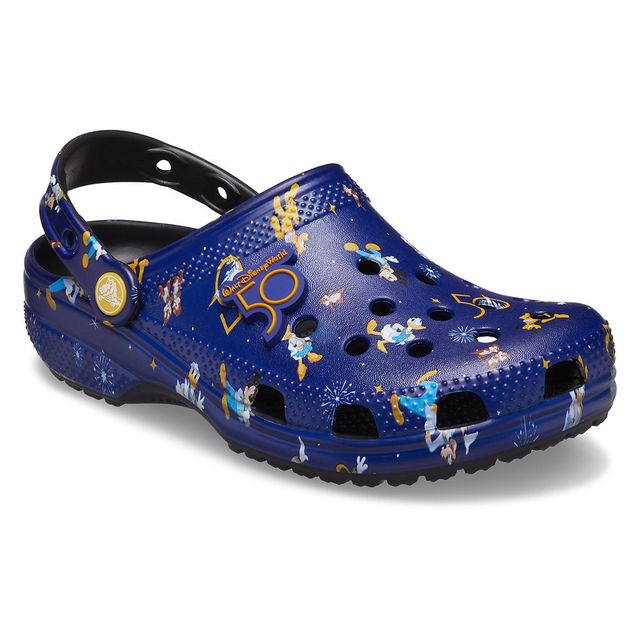 There is a pair of 50th anniversary Crocs with the park logo and all your favorite characters. ©Disney.

Crocs are popular across America and Disney has been in the game for a while, so it only makes sense to see a commemorative pair for Walt Disney World's 50th. The blue Crocs, made of typical Croc material, have the signature heel strap, are lightweight and slip-resistant for when you come off Splash Mountain and are soaked. The pattern on the shoes consists of many of your favorite characters, including Mickey Mouse, Minnie Mouse, Donald Duck, Daisy Duck, Goofy, Pluto, and Chip and Dale. They also have what Disney calls "a fixed PVC "Walt Disney World 50 embellishment."

As I've said repeatedly, I love it when Disney teams up with another company to make something fun, and while Crocs may not be my personal cup of tea, these do fall into that category. You can get them at shopDisney.com for $59.99, a little more than you'd normally see Disney Crocs.

If you don't want to break the bank or fill your house with everything Disney like some of us, there are alternatives. As I said earlier, I'm really digging the Vault Collection with its retro vibe (that's a '70s sentence if ever there was one). My first Walt Disney World visit was as a 4-year-old, back in 1972, less than a year after the park opened. Back then, the advertising was all about Mickey Mouse and Florida.

One of my favorite 50th anniversary items I've seen so far is this simple pin that's reminiscent of the advertising of the day. 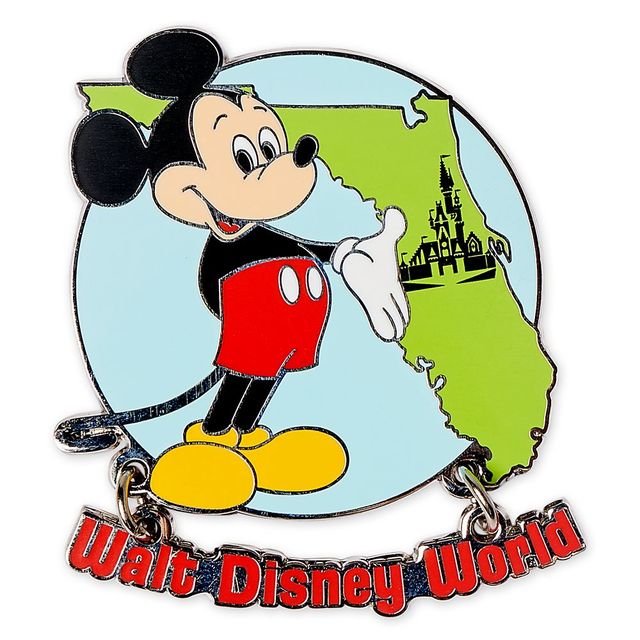 The pin depicts a retro Mickey Mouise welcoming you to a very large Walt Disney World resort located in central Florida. It's a dangle pin, so the wording "Walt Disney World" hangs off of chains from the main part of the pin.

It's simple and reminds me of the resort's early days. At only $12.99 at shopDisney.com or the parks, it also doesn't take up much wall space.

There you have it folks, a small sampling of the hundreds of items available to commemorate Walt Disney World's 50th. These are the few that jumped out at me, but I'm sure there's something for any Disney fan.

As always, would love your thoughts and if someone sees that watch available, please give me a shout out immediately!

Thanks for reading and see you real soon.