The new Disney's Merriest Nite after-hours holiday event made its debut on November 11. All of these events are sold out for 2021, but if you were on the fence about purchasing a ticket next year, we hope this overview will be helpful. 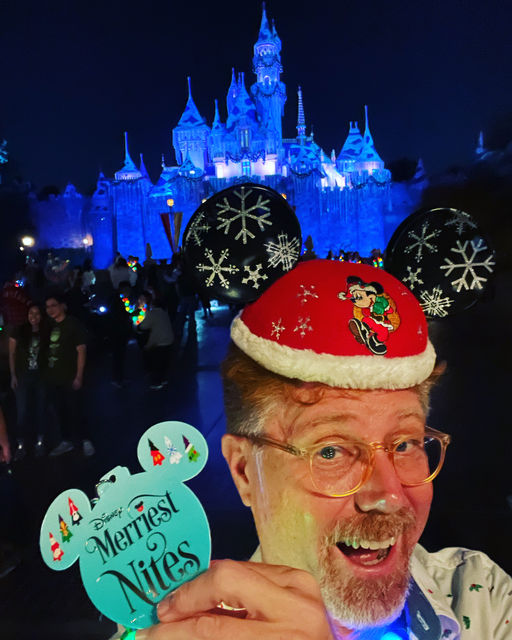 The Christmas Fantasy Parade debuted at this opening night. There seemed like loads of people there but parade viewing wasn't too crowded on Main Street—and remember that this was even with "it's a small world" closed. That's a great sign for future events when this popular holiday attraction opens. 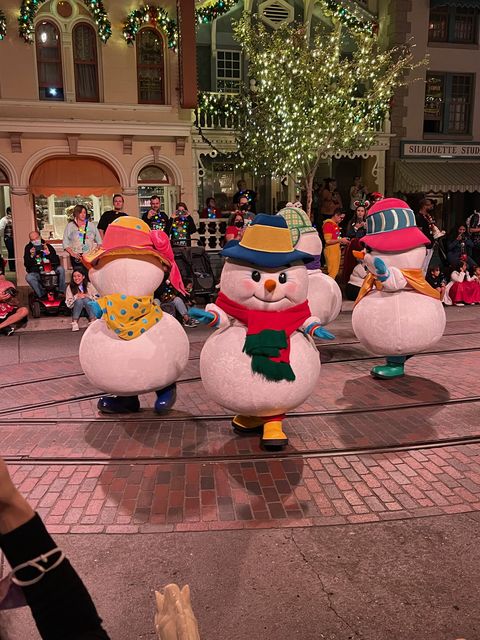 Mobile ordering was a problem on opening night, with lots of the food items not ready until quite late—so the first fête got off to a bumpy start. This might have created longer queues for the meet-and-greets. Hopefully all of these problems will be addressed for futures parties. Remember that Star Wars Galaxy's Edge, Toon Town, and Critter Country are closed along with the Disneyland Railroad. 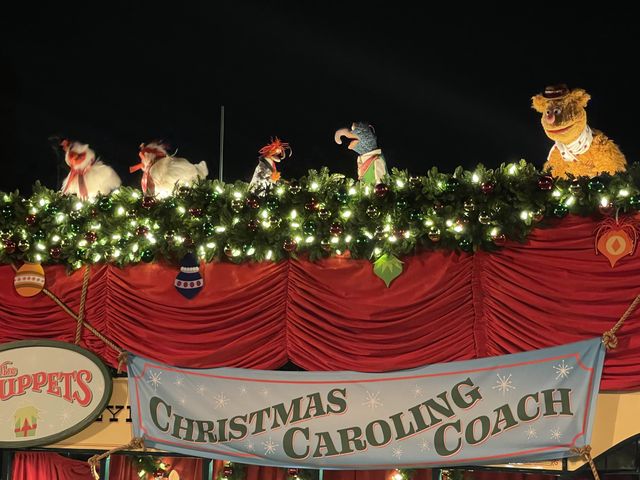 According to the crowd's reaction, The Muppets were definitely a hit. Photo by Todd Pickering.

The Muppets have taken over one of the Disneyland Omnibuses, and converted it into a rolling stage. Miss Piggy and Kermit are on the bottom, with Gonzo, Pepe, Sam the Eagle and Fozzie Bear upstairs. Of course, Gonzo brings along some chicken pals. 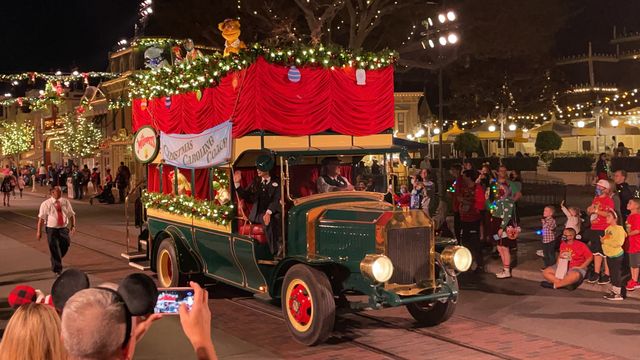 The Muppets in the Omnibus. Photo by Todd Pickering.

The Caroling Coach enters at Town Square and drives down Main Street before making a performance stop at the hub. Once it passes the street the crowd can gather in front of the tape to watch the show. If you stand on the sidewalk you can still see the Muppets over the heads those standing in front of you. The whole show is amplified all up and down Main Street USA, as well. 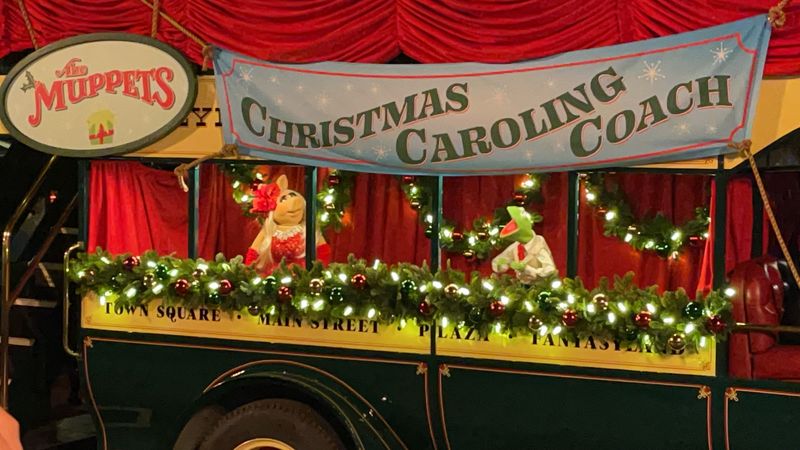 The Muppets were definitely a big hit. Photo by Todd Pickering.

The short performance has lots of bad jokes from Fozzie, a self-centered Miss Piggy dreaming of moving into Sleeping Beauty Castle, and of course musical numbers like "Deck the Halls" (with a clucking chorus), "Feliz Navidad," and "Let it Snow" with... you guessed it...snow! There are four shows a night, and this truly should not be missed.

Live Music in all of the Lands

Since entertainment is my beat, we of course checked out the music. "Tiana's Tinsel and Tunes" didn't include Tiana so the name was a bit confusing. They performed a set every half hour on the Mark Twain and sang jazzy versions of "Winter Wonderland" and "Silver Bells," and ended with the jazz classic, "Bye-bye Blackbird." We recognized the lead singer from Five and Dime over at DCA. She was terrific. Also, a special shout-out to a very talented keyboard player and the banjo player, who really brought that Dixie feel to the music. They're set up at the front of the boat, which didn't offer much viewing space, but the acoustics are good enough for them to be heard all over the riverboat. 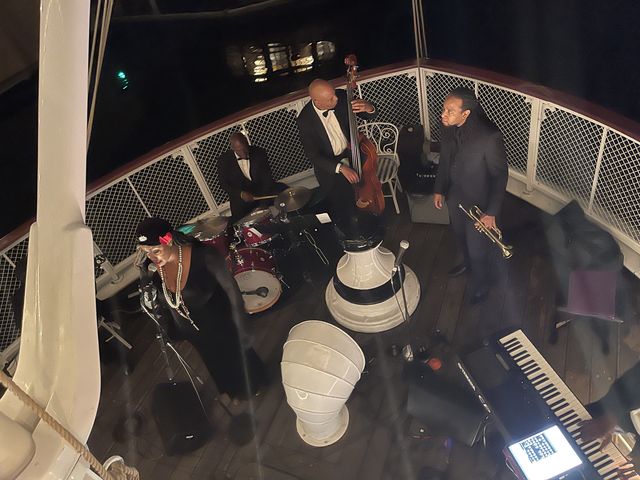 The Jazz music on the Mark Twain was terrific and festive. Photo by Todd Pickering.

On Main Street, the handbell carolers were wonderfully miked and you could hear them anywhere around Town Square. They played the bells and sang classic carols. This truly made the sight of the giant Christmas tree more magical. Tomorrowland had DJ Kara Ford with Buzz in a Santa cap dancing up a storm. The Island Duo played in Adventureland. Dickensian-style Christmas carols were heard in Fantasyland, performed by a brass brand. 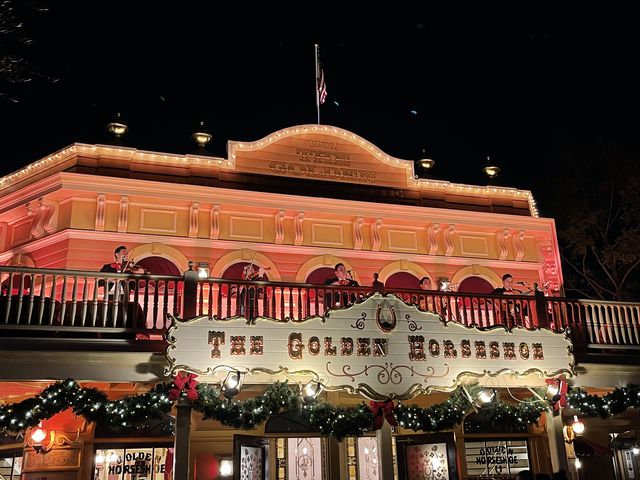 Julian Torres and his Mariachis were "muy fántastico" in Frontierland. Photo by Todd Pickering.

Another highlight was Julian Torres leading an amazing mariachi band atop the balcony of the Golden Horseshoe. His mellifluous tones of "When You Wish Upon a Star" were quite moving. We caught the last set and we think it was an extended version. The crowd was loving it, and danced and sang along.

These also seemed to be the star of the evening. What with "it's a small world" not open, the lines may have been rather long. 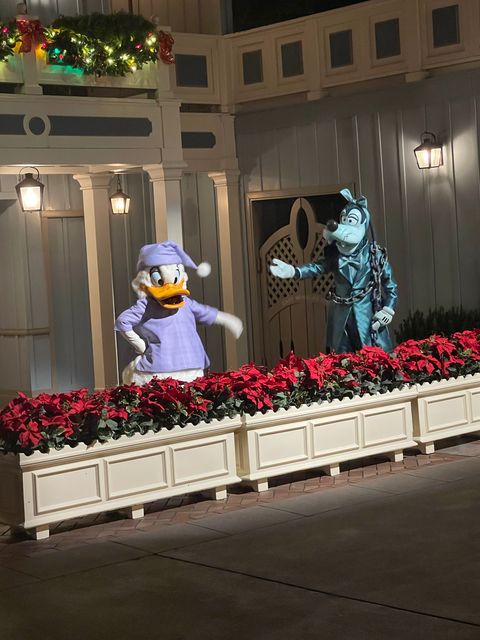 Scrooge & Marley as played by Scrooge & Goofy were on Main Street USA. Photo by Todd Pickering.

Pluto was by the Matterhorn. We kept catching Goofy as Marley and Scrooge McDuck as his Dickensian namesake Ebenezer Scrooge. They also had the Cratchits in Mickey and Minnie form. Over by "it's a small world," there was Elsa accompanied by Oaken and the Duke of Weselton. They were absolutely delightful, and the crowd was loving it. Who knew that Elsa could be upstaged? Pluto was adorable in his reindeer antlers by the Christmas tree, over by the Matterhorn entrance from the Central Plaza hub. 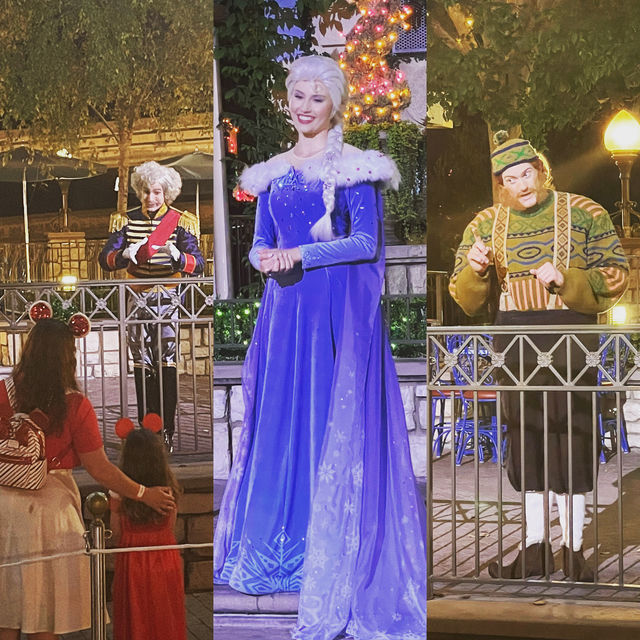 The Duke, Elsa and Oaken were in near "it's a small world." Photo by Todd Pickering.

We had planned to get the Thanksgiving Leftover Burger and Pot Roast Loaded Fries, but they didn't appear on the mobile app until after 10:00 p.m. The hit of the evening was Sipping Chocolate with a Dipping Waffle over at Jolly Holiday Bakery Cafe. They had a table out front with the mobile orders when we passed by so they seemed the most prepared. People raved about this special offering. 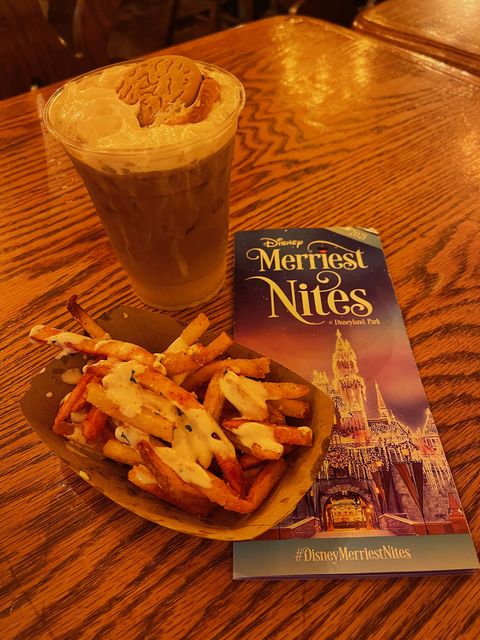 There are only a handful of exclusive items for this event, including the Coffee Nog and Enchanted Forest Fries from Red Rose Taverne. Photo by Todd Pickering.

Most of the special offerings were treats so we got the Coffee Nog with Gingerbread S'more. We have tried an egg nog latte at one of those coffee chains and it was so overly sweet and heavy that we couldn't even finish it. This was a cold brew version and was not overly sweet. The Gingerbread S'more was sweeter, but really crispy and didn't get soggy while setting on the creamy topping. 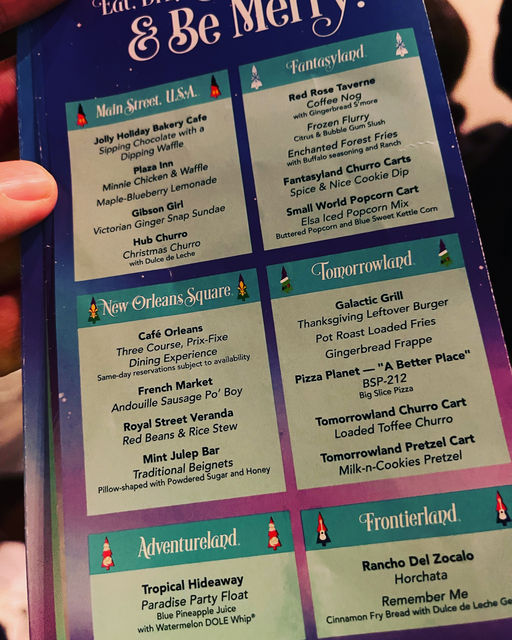 Here is what was offered on opening night of Merriest Nites. Photo by Todd Pickering.

We also got the Enchanted Forest Fries, which were served with Buffalo Seasoning and Ranch Dressing. They were fine, but really didn't scream "holidays." The cast members looked really stressed and didn't seem to have the proper training nor did they seem ready. We heard that a lot of mobile orders were lost. The kinks needed to be worked out on this, for sure.

Is this event worth it? If you're only making one trip to Disneyland during the holidays, then we highly recommend thinking about this event for next year. If you don't like the Muppets and really couldn't care about the character interactions, then this event is not for you.

The event is more of a night in the parks with less capacity. We waited only 15 minutes for Big Thunder Mountain Railroad, so that line seemed decent. Haunted Mansion Holiday was clocking 30 minutes when we walked by, so the lines do seem shorter in general. 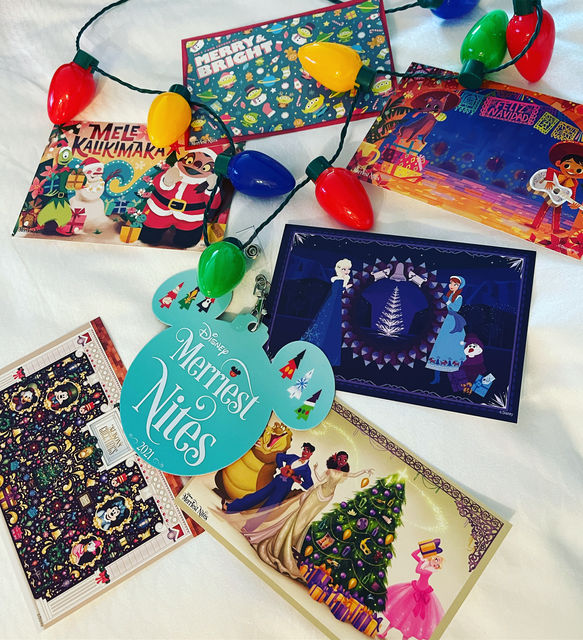 Postals of all of the lands were giving out as a parting gift. Photo by Todd Pickering.

If you've seen the Christmas Fantasy Parade before, then we highly recommend putting the Muppets at the top of  your list. We also recommend eating right before you arrive and have a treat or two.

As for meet-and-greets, there are so many that you should definitely pick your favorite character first .They were very popular, indeed—maybe more so than the Muppets. We got to Pluto at 11:45 and he was closed for the evening as the line was still quite long.

We know the food situation will only get better, and hopefully "it's a small world" will be up and running to eat up some more of the crowd.