I'm back on the East Coast editor's desk for a couple of weeks to give Alan a well-deserved break from the 50th Anniversary festivities, so this Update will be much shorter than usual.

The California Grill at Disney's Contemporary Resort is hosting an over-the-top New Year's Eve celebration to ring in 2022, and admission will set you back $700 per person. 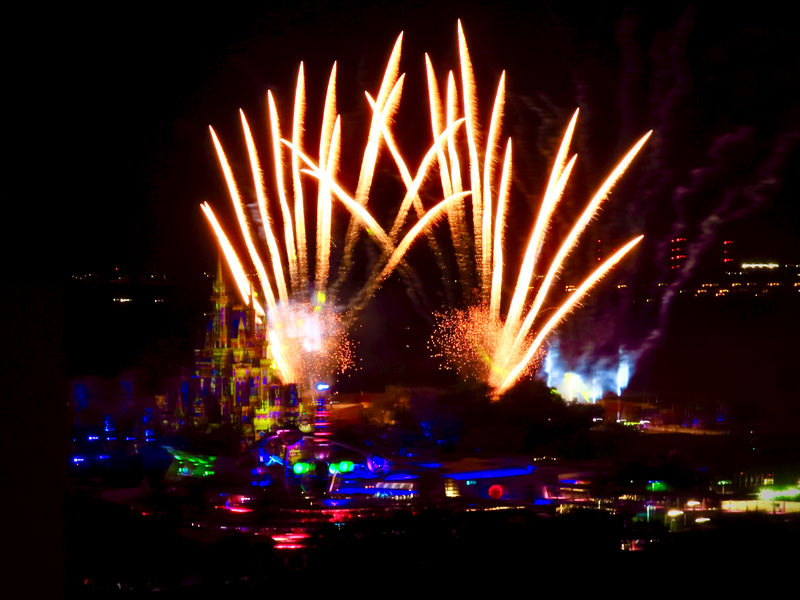 You can ring in the new year with this view of the Magic Kingdom fireworks from the California Grill. MousePlanet file photo.

From the event description:

Ring in the New Year with elegance at California Grill. Enjoy champagne and delightful wines, marvelous food and one-of-a-kind entertainment.

Dine and delight in a setting inspired by the twinkling lights and lush greenery of California Wine Country. Your brand-new 50th Anniversary Hosts—a pair of Sparkling Sommeliers painted in luxurious gold—are here for your photographic fun!

Enter the Napa Room, now transformed into an eclectic speakeasy! Be mesmerized by a sleight-of-hand magician while you sip delicious wine pairings and custom-crafted cocktails.

The Sonoma Room is next on your journey into 2022. Here you can visit Mickey Mouse, Minnie Mouse and Baby New Year Donald.

We hope you come dressed in your best and are ready to dance! Our DJ has curated a music fest and a roaming violinist is ready to serenade you with upbeat melodies.

As you float between the 2 rooms, you’ll find 50th Anniversary food stations. Indulge in delicious seafood—including delectable caviar—that honors the legacy of California Grill chefs. Enjoy this trip down memory lane as you dine on some favorite offerings from the last 50 years.

Tickets are $700 per person, including tax and gratuity. Call (407)824-2013 to reserve your seat. Payment in full is due at the time of booking, but you can cancel without penalty at least 24 hours in advance.

If a $700 wine dinner is outside your interests or price range, you'll be happy to know that both EPCOT and the Magic Kingdom will offer fireworks shows on New Year's Eve.

At EPCOT, the evening performance of Harmonious will take place at 6:30 p.m., and the New Year's countdown fireworks are scheduled for 11:54 p.m. EPCOT is scheduled to close at midnight on New Year's Eve. 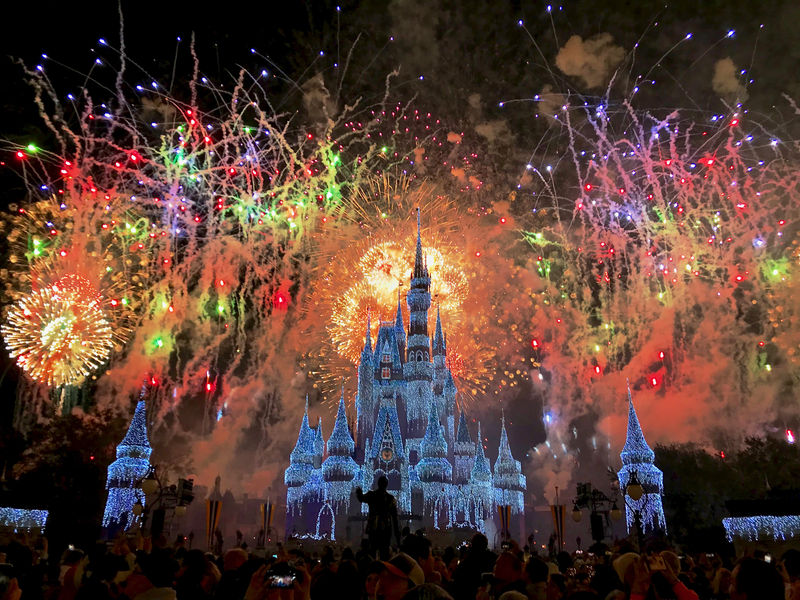 The Magic Kingdom will present the Fantasy in the Sky fireworks on New Year's Eve. MousePlanet file photo.

At Magic Kingdom, the Disney Enchantment fireworks show will take place at 6:30 p.m., with the Fantasy in the Sky fireworks at 11:50 p.m. The Magic Kingdom is currently scheduled to remain open until 1 a.m.

With Walt Disney World crowds returning to pre-pandemic levels. it's a good idea to get to your park of choice as early in the day as possible. Alan traditionally rings in the new year from EPCOT, and will certainly share his best tips in a future update.

The Indiana Jones Epic Stunt Spectacular is scheduled to reopen at Disney's Hollywood Studios on Sunday, December 19, with cast member previews taking place this week. The show is one of many entertainment productions that remained "temporarily unavailable" after the Walt Disney World theme parks reopened in July 2020. Sunday's first showtime is at noon. 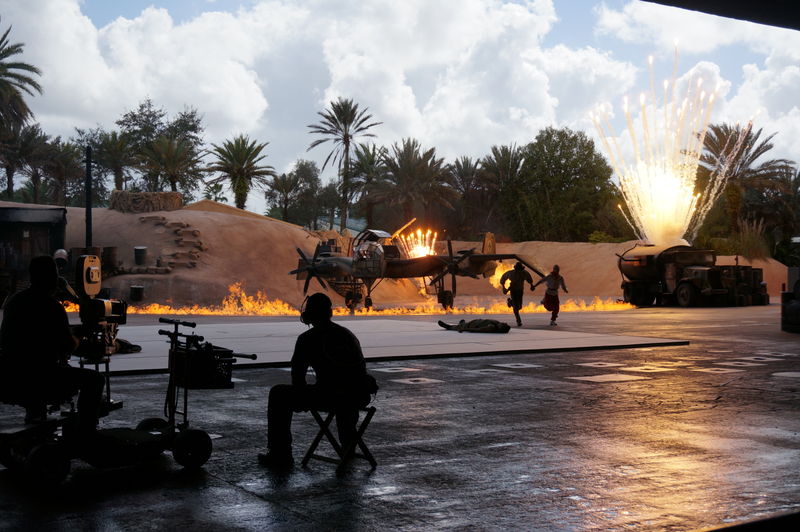 The popular stunt show originally opened in 1989, and has a capacity of more than 2,000 guests per performance. The show previously offered FastPass+, and is listed as one of the attractions at which guests using the Disney Genie+ service can reserve a Lightning Lane return time.

…FOX35 Orlando reports that the Walt Disney World Railroad has begun testing at the Magic Kingdom, in advance of the reopening of the attraction. The ride has been closed since 2018 due to construction of the Tron Lightcycle Run ride in Tomorrowland, which is expected to open in 2022.

…REMINDER: On Christmas Day (Saturday, December 25), the Disney Parks Magical Christmas Day Parade will air on ABC-TV from 10 a.m. until noon (Eastern and Pacific Time), with Derek and Julianne Hough from the Walt Disney World Resort, and Trevor Jackson and Sherry Cola from the Disneyland Resort. It will also be available for streaming the next day on Hulu. In addition to the musical acts (which are listed in this Disney Parks Blog post), Disney says that the specials will provide peeks at Star Wars: Galactic Starcruiser, the Disney Cruise Line ship Disney Wish, Walt Disney Animation Studios' Encanto (which opened November 24), and Steven Spielberg's new film West Side Story.

…REMINDER: Give Kids The World Village's highly popular "Night of a Million Lights Holiday Lights Spectacular" has returned for its second annual showing. Last year's edition attracted over 90,000 visitors to the Village and USA Today named last year's event as the "Number One Thing To Do In Orlando In December." Night of a Million Lights enables guests to immerse themselves in an exquisitely decorated fairytale neighborhood which wish families call home during their stays. Guests can enjoy a 360-degree dancing lights show set to music; explore a sparkling tree trail; view larger-than-life holiday displays; take photos at one-of-a-kind step-in frames and backdrops; visit Santa in his elaborately decorated summer house inside a holiday marketplace; and enjoy a guided storytelling tour of dozens of magnificently lit villas from the comfort of a tram, included in the price of the ticket. A majority of the lights were donated by Walt Disney World. For those that miss the Osbourne Lights at Disney's Hollywood Studios, this display is very reminiscent of that, especially back in the time that Residential Street was still standing on the park's Backlot. Night of a Million Lights runs through January 2, 2022, from 5:00 p.m. to 10:00 p.m. daily, with entry times staggered to prevent crowding. Tickets are available at www.gktw.org/lights Note: some dates already sold out, including December 5 and 12. Proceeds support Give Kids the World Village (located at 210 South Bass Road in Kissimmee, Florida), which provides critically ill children and their families with weeklong wish vacations at no cost.

Annual Passholder and Florida Resident offers are now available for stays most nights from December 12–24, 2021.

Our travel partner Get Away Today is available to help you book rooms and packages, and include its complimentary Concierge Services. More details are here. With Get Away Today's complimentary Price Monitoring, any time a special comes out, it will automatically price check it for each of its guests. If the new special is better, it will automatically apply the new savings and let the guest know. If it's not a better deal, they will leave everything as is, and keep their eyes peeled for future promotions that could save guests more.

You can get a vacation quote from Get Away Today here. (Responses provided in 1 to 3 business days.) You can also call 855-GET-AWAY during regular business hours (Monday to Friday 9 a.m. to 5:00 p.m. MT) and tell them MousePlanet sent you!

Be sure to check out Get Away Today's Universal Orlando Resort ticket offers too.