In the latter part of my one day in Galaxy's Edge, I was overjoyed to see in three-dimensional space my MousePlanet colleague and friend, Alan Dalinka! 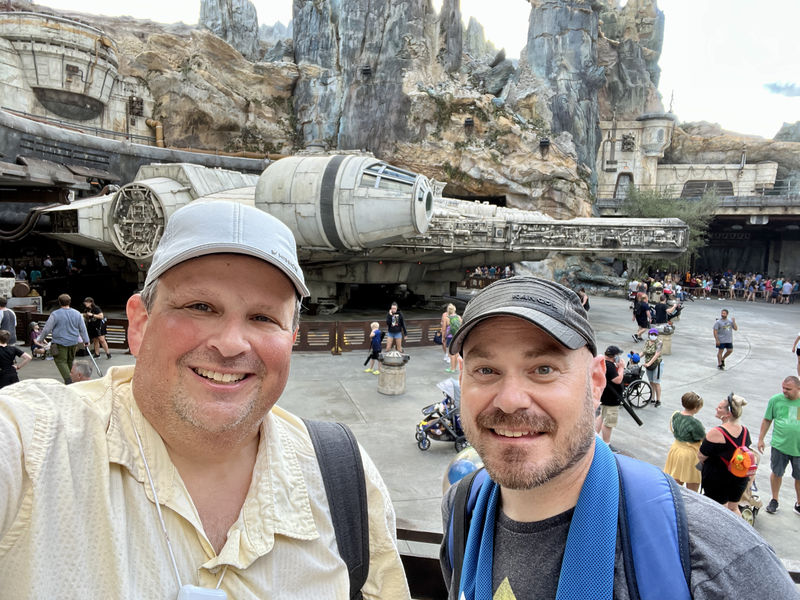 Finally meeting in person! Two MousePlaneteers get together in a galaxy far, far away. Alan (left) and me. It was destiny! Photo by Alan S. Dalinka.

Yes, MousePlanet's own weekly Walt Disney World reporter, consummate host of our "Fun at Home" series last year, the walking Disney encyclopedia, Alan S. Dalinka came out of hyperspace and landed in Black Spire Outpost so that we could enjoy the Bright Suns of Batuu together! This was a very special time since we had only ever seen each other on screens for two years!

With his knowledge and guidance, my family and I felt like VIPs in the park as he showed us many details and shared his knowledge along our journey. A meeting like this is another part of what makes a Disney parks trip a bit magical. When you meet up with friends in an environment that lets you have fun together, you get the sense of Walt Disney's intention for this entertainment enterprise. Alan knows how much Star Wars means to me and so it was a special occasion indeed.

Well, we didn't just stand in front of the Millennium Falcon and take pictures all day! We rode it, too! But first, we took a little trip back to a classic…

It's not a day at Disney's Hollywood Studios without a ride on Star Tours! It still hits that nostalgia mark when you see the AT-AT outside the queue and listen to C-3PO and R2-D2 arguing inside about the faulty transport you're about to take. I love seeing the other little droids in the line chatting away as they "repair" odds and ends. I think back to hearing the Droid Room music while I glance over my shoulder and catch a glimpse of the Mon Calimari animatronics in the control center. It's all still there. This is often why we don't like rides to change or leave—there's a reassurance (not just nostalgia) that these things remain in place for you and for new visitors to enjoy. You think to yourself that they'll still be there, waitiing for you to come back.

Star Tours is as good as ever, especially with so many different scenes across the entire saga of movies. Even with all those randomly selected scenarios for you to travel into, the second half of my journey is always seems to be The Phantom Menace Naboo scene. I'm going to have to ride this thing probably 10 more times to see something different! I love the scene anyway, especially the dive into the water and the window crashing at the end. And this time my kids didn't close their eyes!

Then there's the old "exit through the gift shop" right into Tatooine Traders, which was pretty much the first all-Star Wars gift shop I'd ever seen and therefore remains high on my list of places where I become separated from my money. Even if most of the items for sale are related to post-2015 productions, the fact that an all-Star Wars gift shop exists at all, and hopefully remains there perpetually, gets high marks from me. I just wish they still made Mickey-Mouse-as-Luke action figures that are unique to the parks.

The Ship That Made the Kessel Run 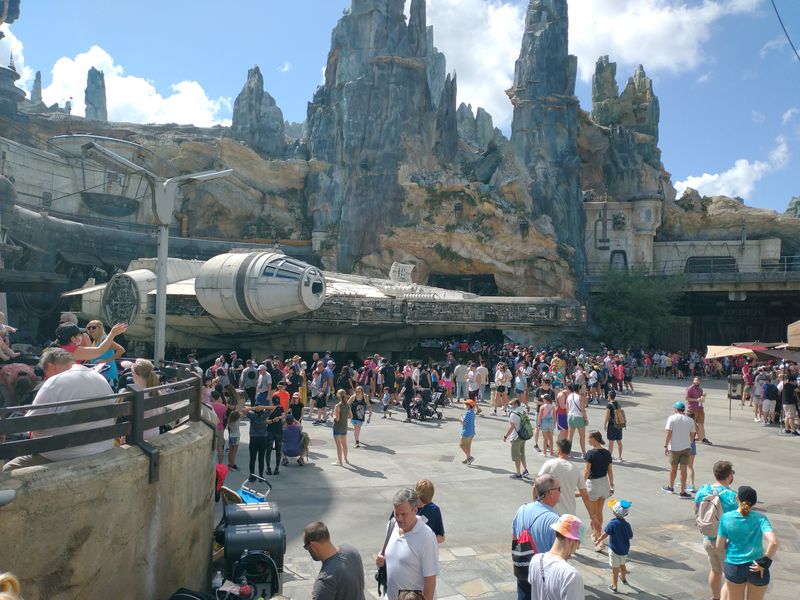 The best "reveal moment" is when the Millennium Falcon comes into view. Photo by Todd King.

Although the life-size replica of the famous hunk of junk is breathtaking, that rectangle radar dish serves as a reminder that this is Disney-era Star Wars and not the original trilogy. That detail aside, this is the ship itself, and it's an amazing sight to behold! It looks real, it looks right, and is possibly the first thing fans like me dreamed up when Disney first announced that a Star Wars-themed land was coming. (Actually, one of my first ideas was a Speeder Bike ride through the woods, sigh.)

Imagineers knew this would be the most important  and recognizeable visual to guests, considering that the Falcon is so iconic with the original Star Wars movies. This is why the ship isn't at an entrance, but is situated in the middle of the land—so that you could approach it from three different paths. Whichever avenue you arrive from, seeing the Millennium Falcon come into view is spine-tingling. The architecture makes you walk through an underpass or over a hill so that the ship gets fully revealed to you in a slow pace. It's like a movie transition, either from an iris-opening lens or a ledge where your eyes kinda get opened and you have to keep walking in order to get it all into complete view. It's pretty brilliant and is the point where many fans have that moment where the magic takes over, your disbelief is suspended, and it all feels real. 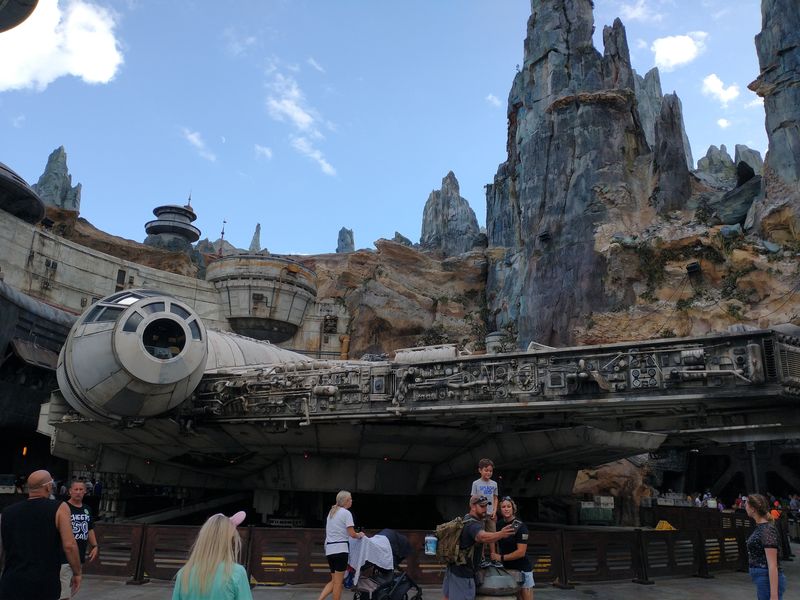 Stepping close and close to the Falcon is a bit surreal. Photo by Todd King.

As you get closer, the smallest details get bigger. The greebles, pipes, and rivets are tangible and it all starts to get a little weird—in a good way. It's like you're there in a place where this ship just happened to land. It doesn't feel like a movie set like the rest of Hollywood Studios; this is made to feel like you're on another planet in the Star Wars galaxy and this is the center-point where that can happen. It happens because the Falcon is almost a character itself from the movies. It has personality, it has attitude, and it's full of stories. And here, you're standing right next to it in a "pinch me to be sure it's real" moment. 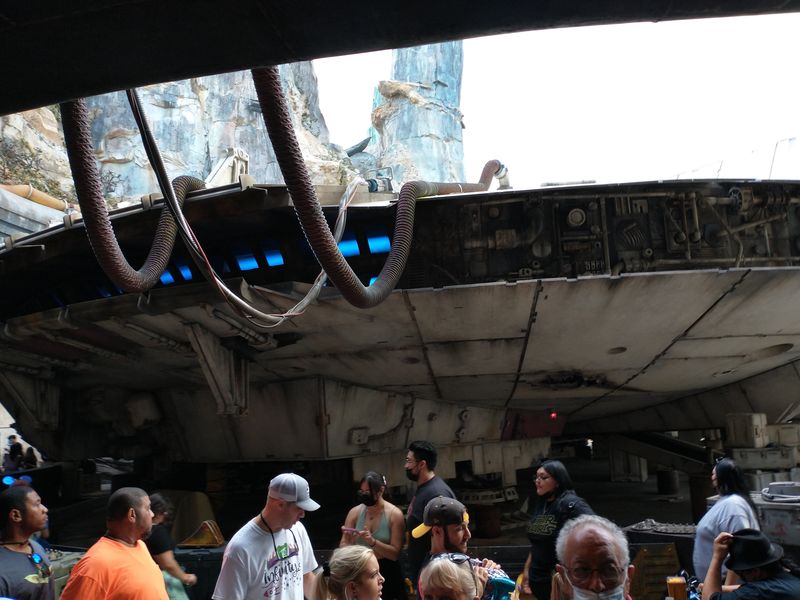 The clever design of Smuggler's Run's queue takes you around most of the Falcon, including the back blue engines. Photo by Todd King.

The temptation to jump the fence and run up the entrance ramp is as tangible as the ship stands in front of you. It's too bad the entrance doesn't allow such a path—but practically, it just can't be that way. Instead, Imagineers trade off that movie-entrance and take you around and behind the ship so that you can admire it from all angles, even from an elevated height so that you can see the detailed top of the cruiser. Not a bad way to wind a queue!

After your briefing by Hondo Ohnaka (voiced by Jim Cummings, who also voices Winnie the Pooh) and R5-P8 in some engine room, you finally enter the ship and see this: 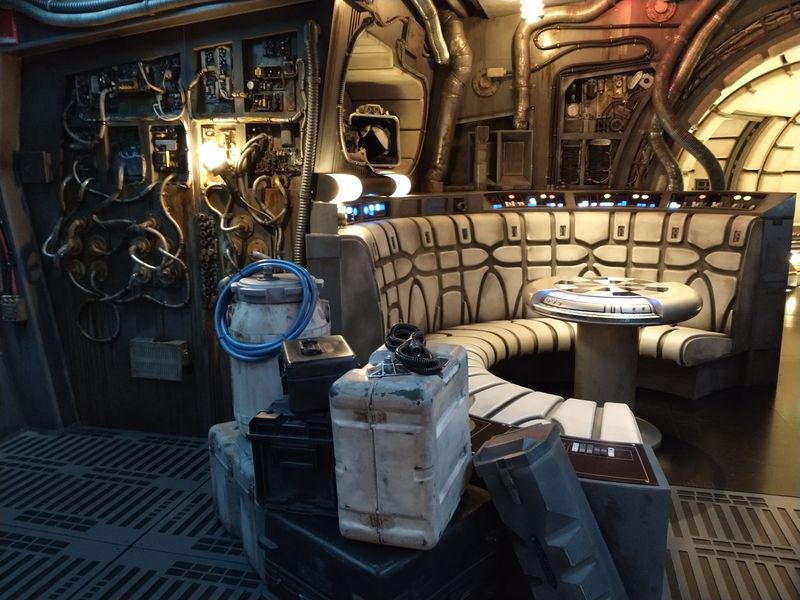 Like out of a dream, it is shocking to stand in and take in this set of the Falcon's interior. Photo by Todd King.

And just like that, you're a kid again. There's a quiet hum about the room and it feels like you've taken a step into some hallowed ground. Even your fellow guests around you fall silent. You can hear the Imagineers saying, "Here you go," presenting you with this faithful space, letting you step inside to look around, touch, and take in the interior of the Falcon. You're in the Falcon… and it's real!

It's not just a replica because you've seen so many stories take place here. Obi-Wan teaching Luke the ways of the Force, Han Solo working and fixing things, and of course, Chewbacca playing games with R2. 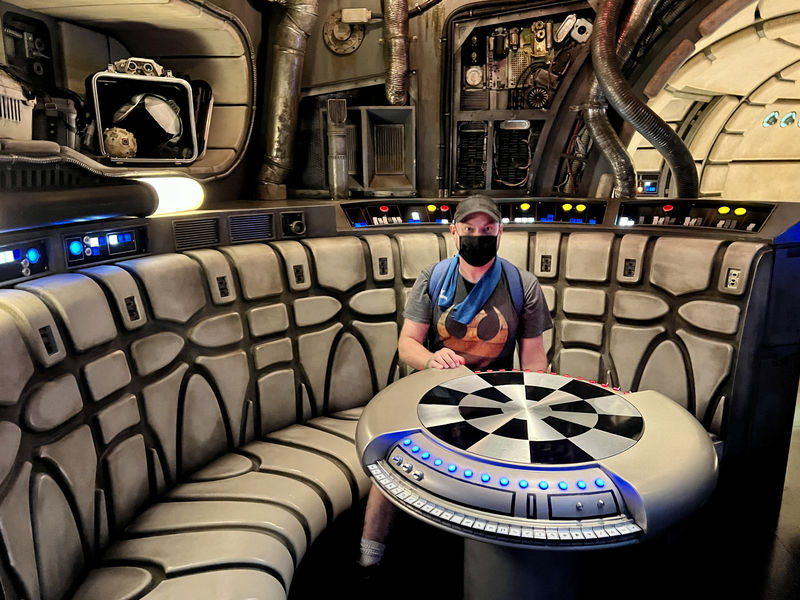 Me (Todd) at the Dejarik (holochess) table in the Millennium Falcon. I could live here. Photo by Alan S. Dalinka.

Yes, I got to sit there—and it was amazing. That's me, some little boy inside the ship, inside the Kenner toy vehicle, inside the movie, within that galaxy. No matter how great Rise of the Resistance is, or even how good this ride is, nothing quite compares with the simplicity of just being there. This is authentic. It also helps that this is from the Original Trilogy—you know, the stuff that most people are most familiar with. I can't deny that I wish there were more things like this. Give me Tatooine, Cloud City, Hoth, Endor's forest. I understand the point of Batuu, a new planet for new adventures, but as a Star Wars fan, yes, I always imagined having adventures in new places, but also dreamed of visiting those spots where it all happened. To physically step into such places, to not only recall the stories but to see them in new ways, would be where dreams could come true. 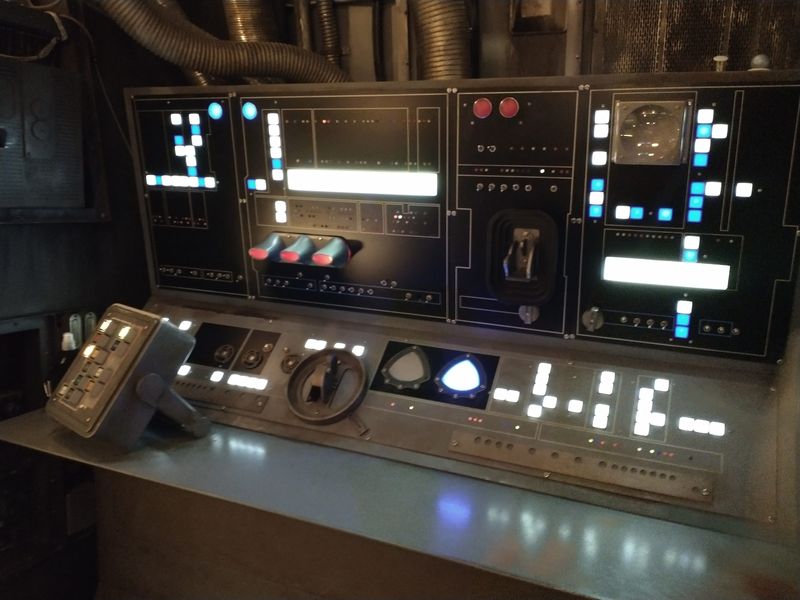 Han Solo expressed his true feelings about the Force at or near this console. Photo by Todd King.

Just being right there in these passageways is beyond description. 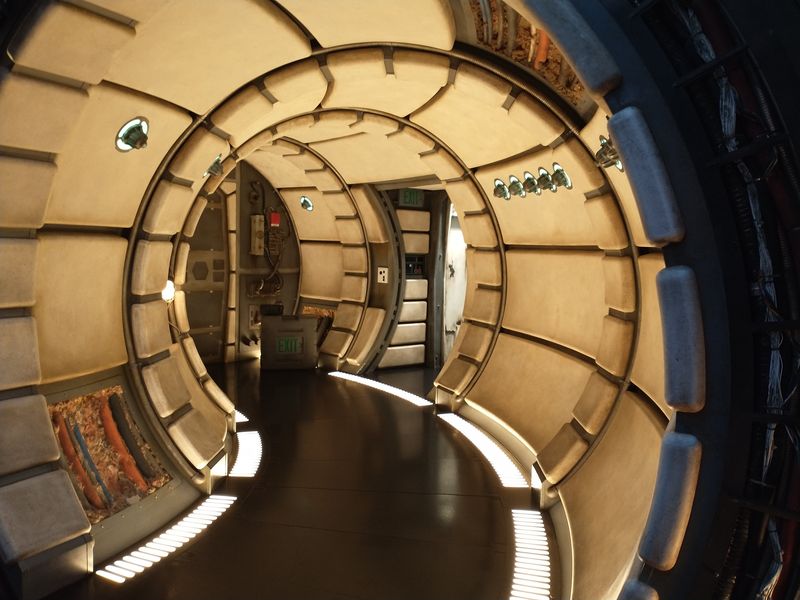 Inside the Falcon. Photo by Todd King.

And of course, you get to fly the thing, too! 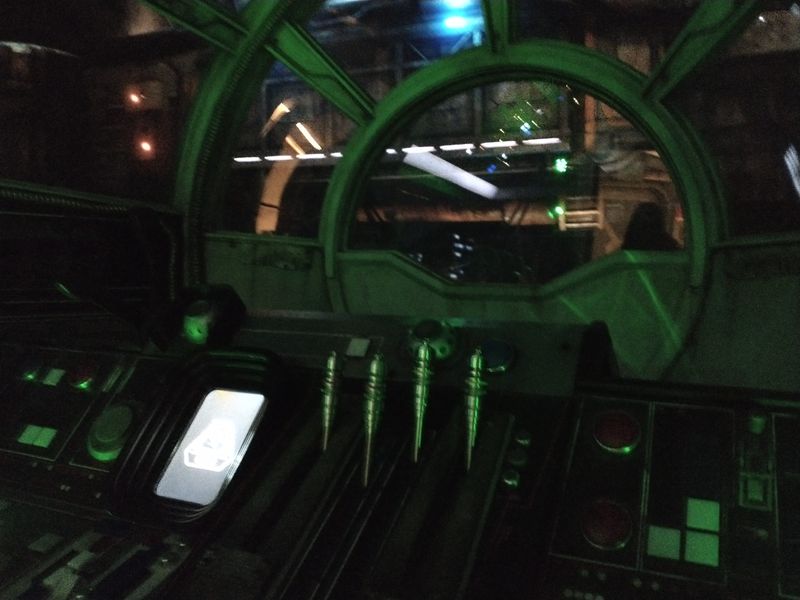 I sat in Chewie's seat as a pilot—I got to pull the levers to send us into Hyperspace. Another dream come true. 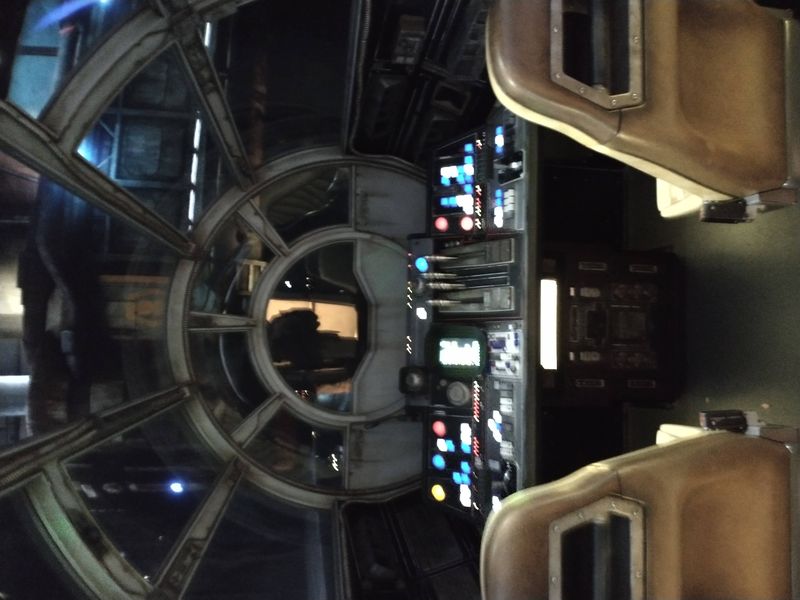 As I left, I snapped the above pic before cast members ushered me out. I just had to capture the moment and the place. In the darkened area with a bad phone camera it did turn out blurry, but that's how dreams are sometimes—just a little out of focus, not perfect, but a slice of imagination.

What about the ride itself? I still remain more overwhelmed by just being there on the ship that the ride experience is just a different thing altogether by comparison. It was nice to be in the front seat so I don't know what it's like for those in the second and third row of seats. I was surprised at how responsive the controls actually were! So surprised, in fact, that I crashed us around a few times before I got the hang of it. I went in thinking controls would be basic and not really react to you, but they do. So, yeah, it's more video game/simulator than just what you get in Star Tours. The interactivity is top-notch even though I noticed some dropped frames in the game screens. I'm sure those things can be improved over time as they get some faster video processors. It was fun being in the cockpit with the family and others just laughing and teasing each other at how bad space pilots we are! All those things Imagineers intended are things I experienced here. I will ride it again, many times I hope.

You can probably guess by now that I like the old-school stuff the best (like the Millennium Falcon). I wish and hope more of this kind of stuff gets added and plussed. As for the whole experience? I'll go again and discover more and have a good time, for sure. In a word, it's fun! It's a wonderfully crafted world where your imagination gets a boost. I want to shop more, I want another Ronto Wrap, I want to find more details and soak it all in more more MORE! So, for a Star Wars and Disney parks fan, it's like everything else in the resort: it's fun enough that I want to return. I'll wish upon a star that they'll gather my ideas for future expansions. Until then, I'll ignite my lightsaber daily in memory of my time at Galaxy's Edge and wait with great anticipation for my return. I must complete my training. May the Force be with you.