Welcome back to another Disney Top 5. For quite some time over the last two years, I was including an extra line to my greeting at the beginning of each Top 5 article. I was hoping that you were all healthy and safe. Sometime this past summer, when it seemed like life might be returning to some sense of normalcy, I stopped typing those words under the assumption that, at that point, we were starting to see the light at the end of the proverbial tunnel. Sadly, over the last few weeks things, at least here in New York, have started to explode again. Cases are way up. Every medical establishment of any kind in this area has super long lines for people trying to get tested. Our school district was giving out free at home tests to each and every parent the other day and the line of cars zigzagged through the high school parking lot and went off campus deep into the neighborhood, eerily reminiscent of the massive food distribution lines we had during the spring of 2020. Unfortunately, it's gotten crazy again.

When it got crazy back in 2020, I posed the question, "Did it make sense to be talking about something as superfluous as a list of things to love in the Disney parks?" The answer back then was an emphatic, "Yes!" And the answer, almost two years later, is still as emphatically positive. What better time to talk or write about the things that make us happy? We're all here on MousePlanet because Disney makes us happy. We come to forget the nonsense that we all have to deal with in the "real world." So, let's keep on talking about the stuff we love as often as we can. Lord knows, I could use the escape right now. I'm sure you all can too.

I've gone back to my series of articles counting down the very best that each and every Walt Disney World attraction has to offer. We left off last time on Discovery Island in Animal Kingdom with the creepy crawly cast of It's Tough to be a Bug. We're going to stay on that island and talk about a spot on Disney property that puts a huge smile on this particular writer's face, the Discovery Island Trails. Typically, I don't buy into Disney's premise that an area of the parks that you simply walk through has to be labeled an attraction. However, one of the goals of the Imagineers when they were dreaming up Animal Kingdom was that, in this particular park, more so than any other, guests should be explorers. They should experience the natural surroundings and the animals carefully housed within them at a different pace. You're supposed to take your time in Animal Kingdom. You're supposed to explore the park's versions of nature just the way you would explore it if you were really out on a safari or a trek through the jungle. The Discovery Island Trails might be one of the best examples of the Imagineers fulfilling their blue sky promises.

When I do find myself exploring these trails, I'm always amazed at the beauty of the rockwork, the meandering walking paths, the close-up experiences with the animals and the scenery around every corner. However, the thing that amazes me the most is that just about every time I've wandered into the trails it's pretty much just me and my family or friends enjoying this incredible spot all to ourselves. Either people don't know it's there, or they're too busy rushing off to Pandora or the safari to bother seeking them out, and that's a shame. There are several entrances to the trails which surround the Tree of Life and there's plenty to see once you're on them. There are animals that you can't see from other locations. There's incredible up close views of the animals carved into the tree's trunk and roots. It's completely worth your while to wander in and explore. Why? Let's take a closer look with my Top 5 things to love about the Discovery Island Trails at Animal Kingdom.

Something that the Disney Imagineers have historically done so well is create environments that look completely natural when they are completely not. Essentially the entire Animal Kingdom theme park is a created environment. Maybe, just maybe there are a few remnants of the Florida swampland left intact, but I doubt it. The Imagineers imported and planted over 40,000 mature trees when they built the place, so it's safe to say that everything you see wasn't there and yet, looks completely real and authentic. How many times have I stood in front of this particular waterfall on Discovery Island and felt like I was looking at the real thing.

One of my favorite spots on the trails is alongside this beautiful waterfall. Photo by Chris Barry.

The Imagineers do an incredible job with rockwork. They top themselves when they add water to their faux rocks. Think of the Canada pavilion in Epcot. Think of the waterfall outside of Be Our Guest which looks just like the one in the beginning of the animated classic Beauty and the Beast. But, personally, I think the waterfall in the Discovery Island Trails that leads down into the river is the most beautiful one on Disney property.

Currently on the Walt Disney World official website they list 11 different animals that reside along the Discovery Island Trails including some storks, some cranes, the adorable otters and Galapagos Tortoises just to name a few. But my favorite has to be the Red Kangaroos, and to get the best view of them you need to actually head deep into the trails and seek them out, once again fulfilling the Imagineers promise of this unique theme park. 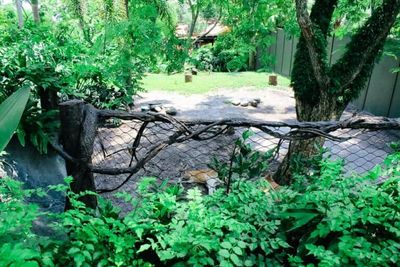 They don't look like much, but be patient and wait for them to hop around. Photo by Chris Barry.

I have to admit, they're not typically too active. Most of the time, they're just laying around basking in the sun. But, occasionally you get to see them hop around and let's be honest, who doesn't want to see that? Your best bet to see them is in the morning or early afternoon because later in the day they rope off this special area, so venture in and grab a glimpse of them while you can. It's well worth it.

3 - The Views Across the River

One thing that Animal Kingdom is real big on is scenic views. There are several spots in this wonderful park that are hands down my favorite viewing spots anywhere on Disney property. Take for example, the view of Everest from the Flame Tree Barbecue seating area, hands down one of the prettiest places to eat anywhere in Walt Disney World. Gazing out at the Tree of Life from several spots along the walkway between Africa and Asia is another favorite. But a much less popular scenic viewing pathway is part of the Discovery Island Trails. The view across the lake from Discovery Island at the aforementioned Africa to Asia walkway is really quite spectacular. 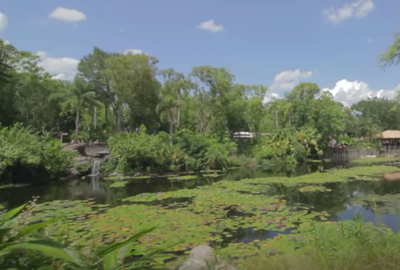 A screenshot from an older video of mine walking along the river on Discovery Island shows the view across from the Tree of Life. Photo by Chris Barry.

2 - The Tree of Life Carvings

Years ago I wrote an entire Top 5 article choosing my favorite carvings in the Tree of Life. Considering there are 325 different animals carved into the tree and its root system, that was a pretty hard list to narrow down. One of the truly amazing things to do at Animal Kingdom is to take the walk through the Discovery Island Trails and get up close and personal to these exquisite carvings. They are true works of art and the trails afford you the unique opportunity to see them up close, to walk underneath or around several of them and to actually touch many of them. 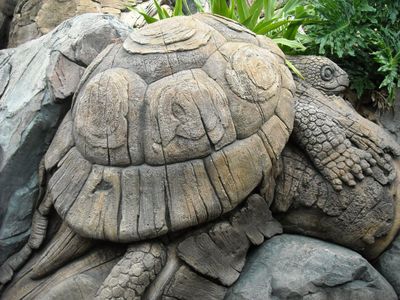 A really amazing turtle carving that you can only see up close on the trails. Photo by Samantha Barry.

Trust me, you haven't experienced Animal Kingdom's icon, the spectacular Tree of Life, until you've been up close to it. You'll develop and even greater appreciation for just how detailed these carvings are when you walk the trails and see them right in front of your eyes.

That's right. I said the word serenity when talking about a Disney theme park. I typically find Animal Kingdom to be the most serene of the Walt Disney World parks to begin with. We've spent many, many days walking around this beautiful place just admiring the animals and the lush vegetation. Like I said earlier, the Imagineers built this place to be explored. You have to let the place in and stop rushing to the big attractions to really experience it the way they intended. One of the best ways to let this park live up to the Imagineer's intentions is to walk the Discovery Island Trails. 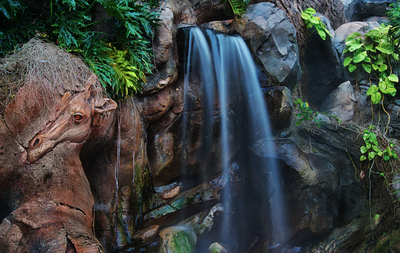 You will escape the crowds. You will forgot where you are. There are no gift shops, no snack carts, and, dare I say it, no Mickey Mouse. There's just the beauty of the animals, the rushing water, the lush flowers, trees and shrubs and yes, believe it or not, there is an abundance of serenity to be found. If you've been there, you know what I mean. If you haven't, then make sure to turn off the main thoroughfares of Discovery Island onto the trails and see for yourself. It's one of Walt Disney World's best kept and most serene secret spots.

I've consistently argued that Animal Kingdom is not a half day park as many have claimed. I felt that right from the beginning even back when it wasn't open at night. With the opening of Pandora and the extension of the park's hours after dark, that argument has fell by the wayside a bit. But I still hear people complain about this truly amazing park and I never understand why. It's not like I read some dissertation from Imagineer Joe Rohde, the genius behind Animal Kingdom's creation and design. I didn't need to hear him tell me that I was supposed to take it slow and explore. I got it from the second I walked through the turnstiles and slowly made my way through the Oasis at the front of the park. And I'm pretty sure that we didn't even find the Discovery Island Trails right away. If I recall, it took us a trip or two to unearth this hidden gem which was essentially right in front of our faces. But once we did, it became a must see and do on every visit thereafter. If you really "get" this park, and understand the intent of Animal Kingdom then I imagine you'll feel the same way as I do about the amazing Discovery Island Trails.

That's all for this time. As always, I'd like to hear what you have to say. Click on the link below to share your thoughts on the Discovery Island Trails. Please, please stay healthy and safe out there and I'll see you next time with another Disney Top 5.