We at Mouseplanet like to affectionately refer to ourselves as "Disnerds" (and have often been called that by friends and family—but not to get off topic). We all grew up with a love of all things Disney, and have early memories being in the Disney parks, watching the Mickey Mouse club on TV (I'm talking about the 1970s version, not the original. I'm not that old) and, in my case at least, being surrounded by Mickey Mouse in my bedroom at night.

There are many of us out there, and some of those are lucky enough, and had the perseverence enough, to live the dream as adults and actually work for the Mouse. Some of these cast members work behind the scenes and some on the front lines. The most talented are Disney artists that design the films, rides, and art that we all so love and enjoy.

Disney has gotten smart in recent years and let some of this talented crew loose on the world of Disney merchandise. I've commented that Disney hasn't necessarily been a cookie cutter lately in the types of clothing and other items they've put out into the world. This is largely due to them letting some of these great artists explore their creativity, and letting them give their own takes on classic characters, like Mickey Mouse.

It was this kind of colloboration that gave rise to one of the newest Disney product lines, the Disney Artist Series collection. Disney put out a call to its talented artists and asked them to come up with new takes on Mickey Mouse. They then selected a few to design new items, all with a fresh spin on the big cheese. Let's take a look at a few of these great designers and what they created. 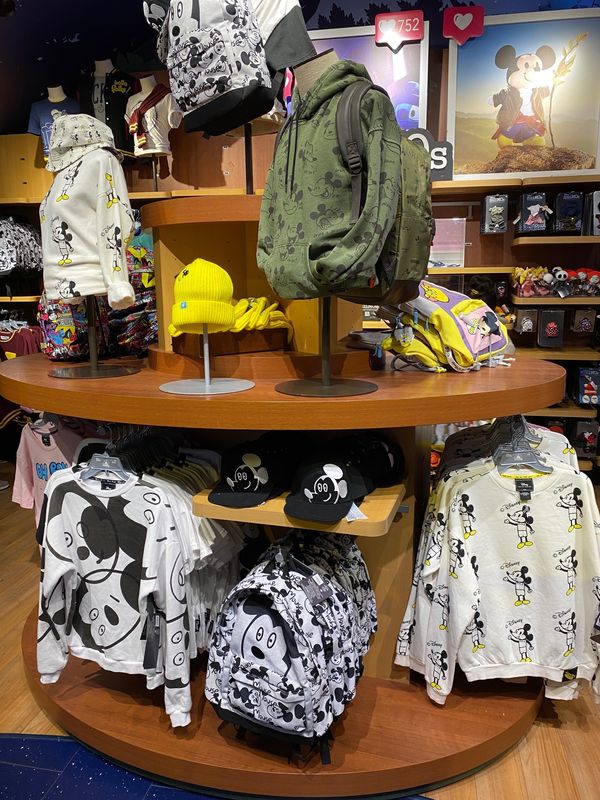 Disney gave some of its designers lattitude in creating different interpretations of Mickey Mouse. Photo by Gregg Jacobs.

Let's start with Bret Iwan, who has a voice you've all heard before. He's been the official voice of Mickey Mouse since 2009. He's portrayed the voice of Mickey on various products, video games, TV shows, films and at the theme parks. He's also a talented freelance designer, so it only makes sense he'd be included when designing new Mickey Mouse merch. He says he relishes his artistic career most when he's allowed to combine his two loves, Mickey Mouse and design. He got to do that here.

For Bret's designs, he went with a slightly abstract Mickey image and chose to use that along with a few of Mickey's most famous sayings. 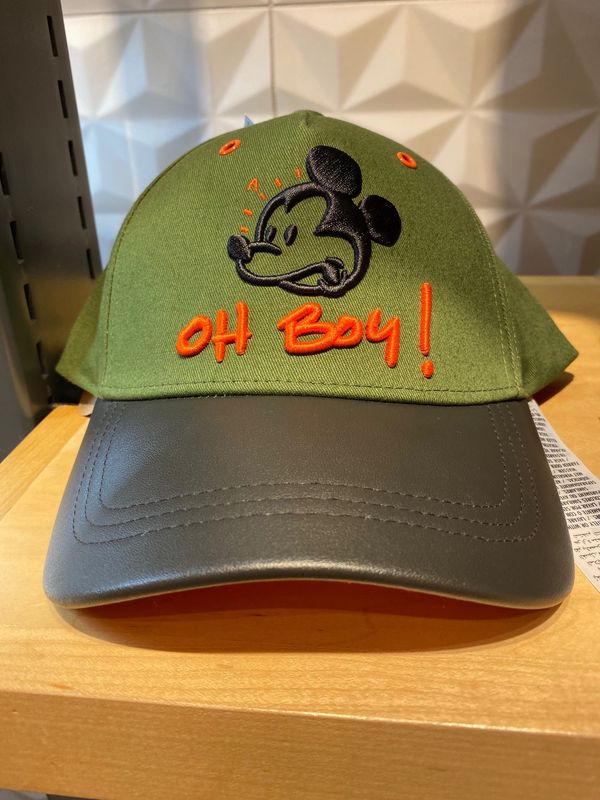 There's a Mickey Mouse hat with his most famous saying, "Oh Boy"! Photo by Gregg Jacobs.

The products he designed range from hats and shirts to a backpack (and I really want the backpack even though I have six of them already). The backpack, which retails for $29.99, is army green with orange touches, and is made of a shiny material. It has the abstract Mickey drawings all over as well as multiple sayings, including "and how" and "aw, come on. It also as the label "MM Script by Bret Iwan." so the artist is identified right on the bag. I spotted it both at the Disney Store in New York's Times Square and at DisneyStyle at Disney Springs in Florida. 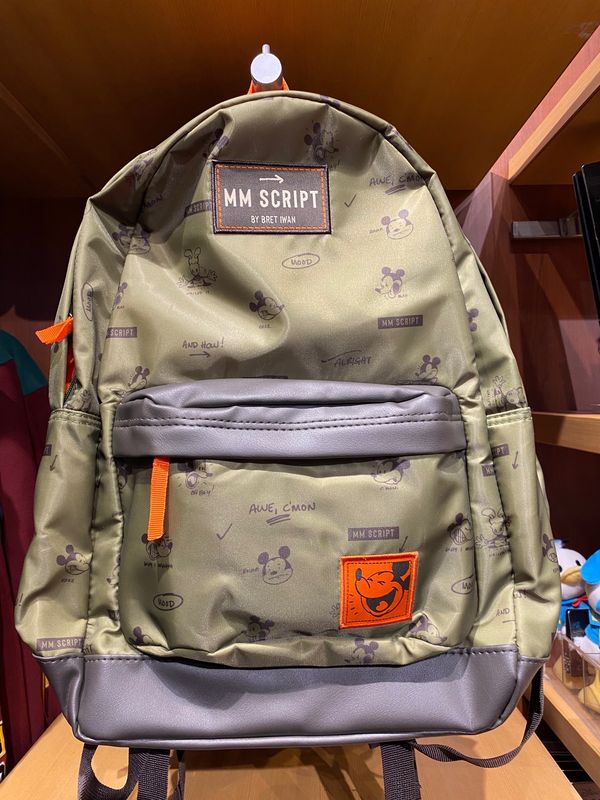 This cool backpack (that I really want) clearly identifes the designer. Photo by Gregg Jacobs.

If you have the backpack and want to coordinate your wardobe, there's also a sweatshirt to match. Made in the same army green and with similar designs and sayings, the sweatshirt is a hoodie and has a large pocket in front to keep your hands warm. 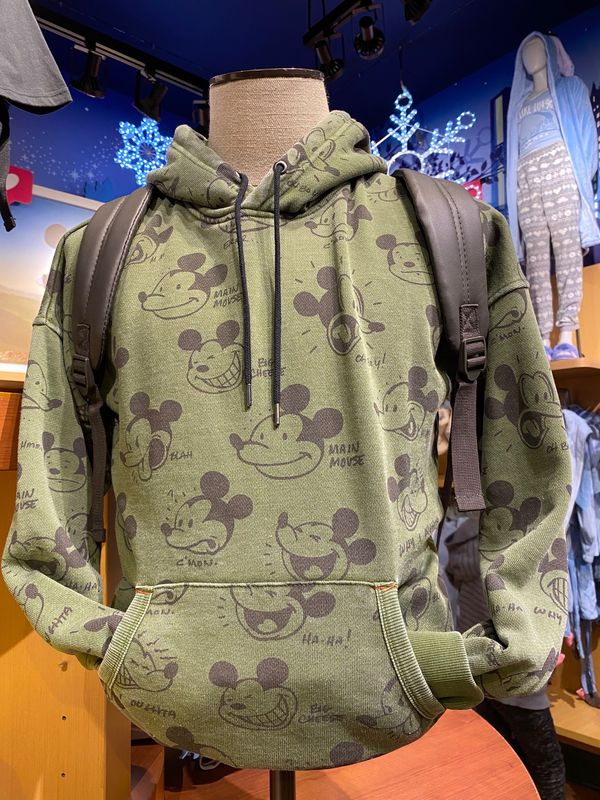 You can get a hoodie to match your backpack. Photo by Gregg Jacobs.

Next up is Deborah Salles. She's been drawing since the age of 8, and pursued graphic design and illustration in college. Having a love of Disney, she wound up working at the Walt Disney Company Brazil as a product designer. She describes her designs finding their way into the Disney Artist Series as "having a Mickey Mouse redesign project recognized has been a dream come true for her". 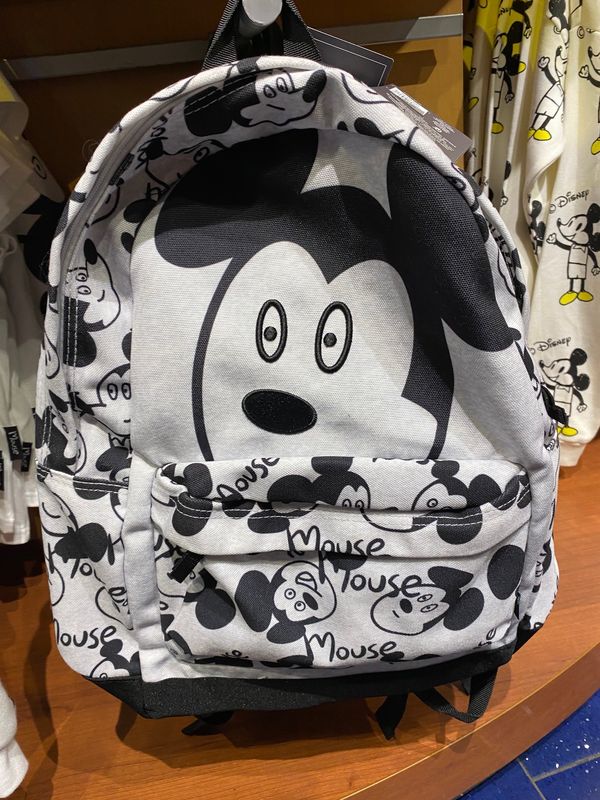 I really need to stop looking at backpacks. Photo by Gregg Jacobs.

Her black-and-white designs feature Mickey Mouse with big circles with wide eyes and a crooked smile. The effect is very sketchbook and striking. Her items include a backpack (I'm sensing a pattern) and several shirts, including two with large Mickey images that go up the right shoulder, and one with a fun pattern of Mickey heads and the word "Mouse" all over the front (really like that last one). 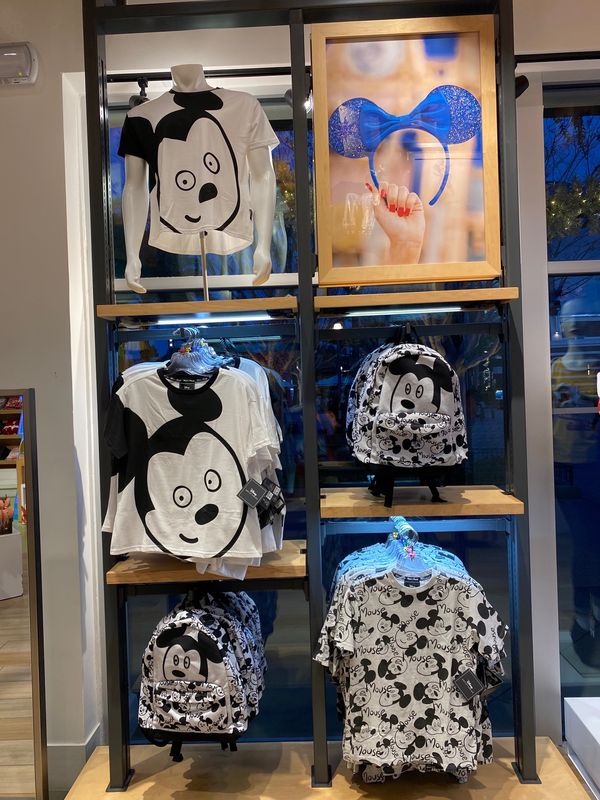 Now let's take a look at the wares of Rafael Faria, a long-time employee of the Walt Disney Company who's also based in Brazil. 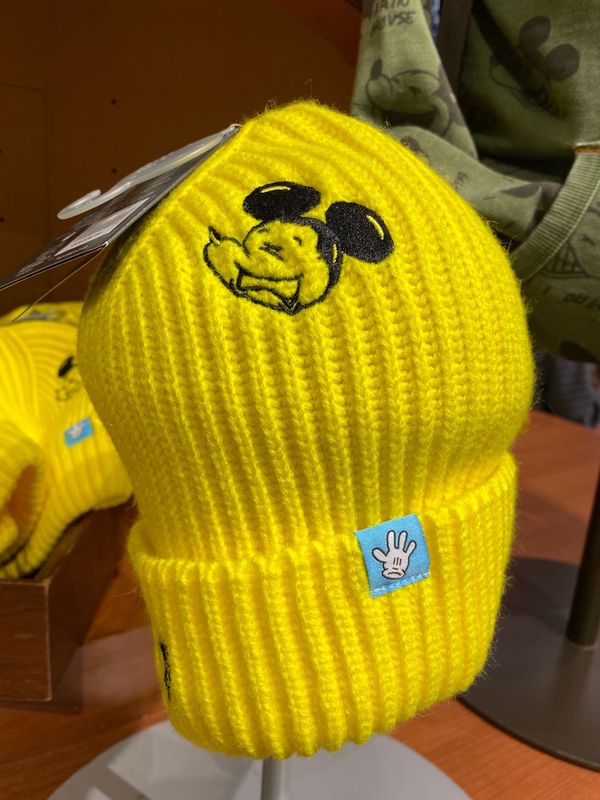 His designs feature a lot of color and are in an "urban style" as described by Disney. Most also have a musical theme. He, too, has a backpack, and it's a lot of fun. It features tons of color and reminds me of a throwback to the 1980s. I see boom boxes, keyboards and a lot of smiling Mickeys. 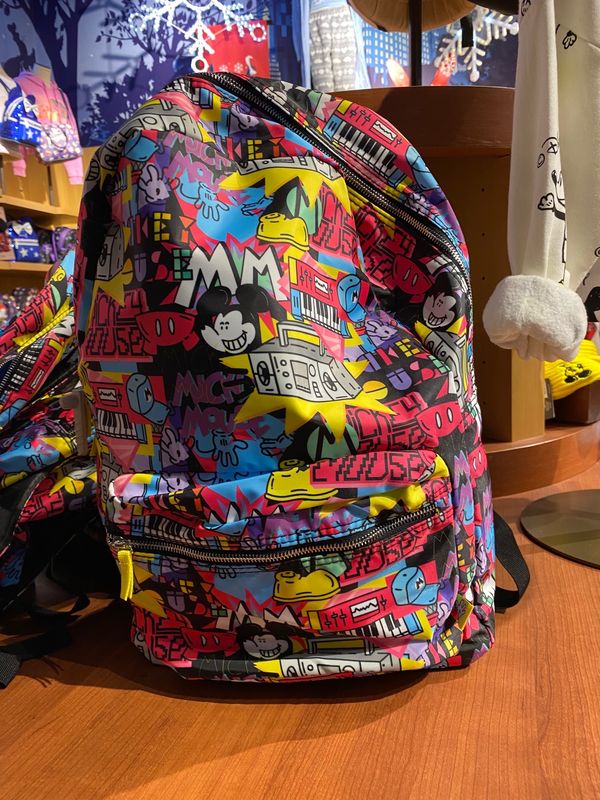 …and we have another backpack (I have a problem). Photo by Gregg Jacobs.

There's also a large colorful hoodie and a couple of T-shirts. Again, these are full of color and musical in theme. There's one black T-shirt that even has a 3D effect (though as Disney points out, glasses are not required to appreciate it).

Finally, we come to Nanako Kanemitsu. She's another long-time employee of Disney, with over 13 years of experience. As per her bio, "she creates new interpretations of popular characters from Disney's ever-expanding brand portfolio, including Star Wars, Disney princess characters, and—the one that started it all—Mickey Mouse." That puts the Disney Artist Series right up her alley.

She camp up with a really fun heavy sweatshirt that features an "all over" stylized Mickey Mouse and "©Disney", which kind of works really well. 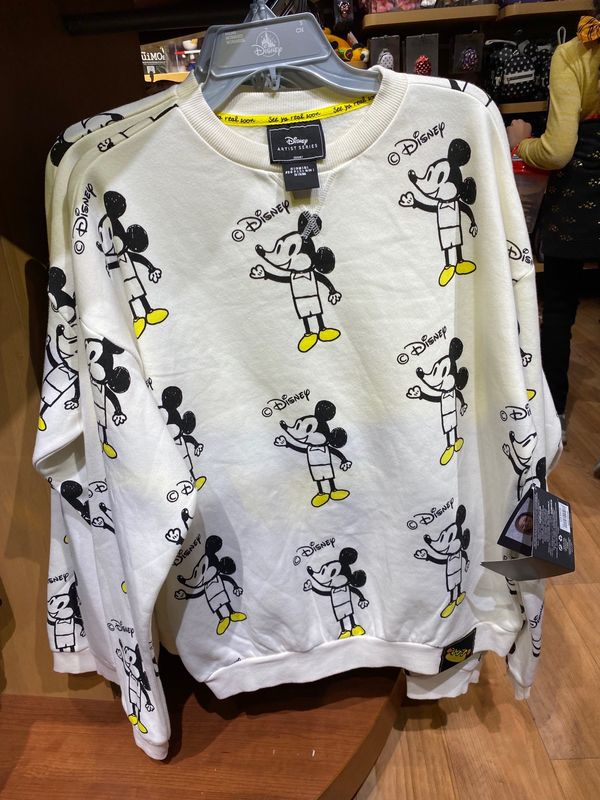 We know that Mickey Mouse is copyrighted by Disney. Photo by Gregg Jacobs.

She also features food and Disney snacks in a lot of her designs. One of her shirts has a "pie-eyed" Mickey surrounded by hot dogs and hamburgers. Another item—you guessed it, a backpack—features Mickey Mouse and a large hot dog. 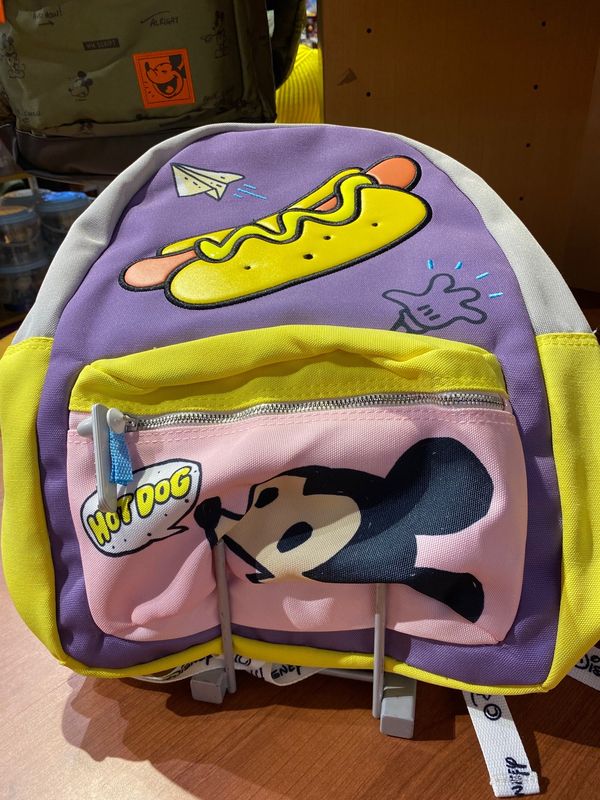 We needed to end this article on a backpack. Photo by Gregg Jacobs.

All in all, her stuff is a lot of fun, and fits in very well with the rest of the collection.

Like with the Disney T-shirts I talked about last month, I like it that Disney is letting loose a bit with its merchandise. They're giving their talented artists some degree of free reign in designing items for us. The swag is available on Shopdisney.com and across the Disney resorts.

Would love to hear your thoughts on these and any other unique Disney merchandise you've come across.

Thanks as always for reading, and see you real soon!