In a time when "seeing is believing" is an accepted maxim, Star Wars had a moment when the wise teacher, Obi-Wan Kenobi, told Luke Skywalker, "Your eyes can deceive you. Don't trust them." It wasn't just a lesson for Luke, it was a warning for us all.

Obi-Wan Kenobi warns Luke not to trust everything he merely observes. © Lucasfilm.

Let's get a little philosophical. Let's take that one lesson and see how it plays out in the saga and influences our own perspective.

But he couldn't see the one right in front of him!

The Tusken was closer than it appeared. © Lucasfilm.

This happened before Kenobi's lesson, but it proves his point. Not only could Luke not trust his own eyes, but he was relying on technology to enhance them, which didn't work too well, either. He was lucky to survive. Sometimes we have difficulty seeing what's right before us.

At the end of the film, the X-Wing fighters—equipped with advanced radars, scopes, and a targeting computer—have trouble shooting the bullseye. Their squadron leader fails to hit it and the remaining pilots, including Wedge, have serious doubts about their chances. "My scope shows the tower, but I can't see the exhaust port. Are you sure the computer can hit it?"

As we know, Luke is the last pilot in the trench and—heeding the voice of his teacher—he trusts his feelings and the Force, switches his computer off, and with instinct and guts, makes the shot. He couldn't rely on the computer to "see" for him. He had to use all his senses in league with the Force.

Too often today, we rely on technology to "see" for us—but sometimes to also think for us and make decisions for us. Technology can help us in our daily lives but we shouldn't rely so heavily on it that we are subserviant to it. It cannot replace our instincts, minds, or spirits.

Here's another memorable moment regarding appearances.

Yoda is so much more than meets the eye. © Lucasfilm.

"Size matters not. Look at me. Judge me by my size, do you?" The whole point of Yoda is to dispell prejudice based on appearances. He's small, talks funny, not quite comely, and old. Luke was looking for what he thought was a "great warrior" and had an image of the Jedi Master in his mind of somebody totally different. That's because his idea of what is "great" and "powerful" is skewed. Yoda not only teaches him to see the world in a new way, but shows him what that means through his wisdom and even his power as Yoda calmly, without effort, lifts Luke's ship out of the swamp.

Luke couldn't believe that this little creature could be a master of the Force—he couldn't see it in his mind's eye. Luke struggled with these ideas, but he was learning. He took the lessons to heart and began to see potential in himself and in others. He could see how Han's life was worth saving, that Leia could learn the Force, that Ewoks could be allies, and even that Vader still had some good in him.

We live in a world where we're guilty of judging others merely by their appearance or by their standing on social media or single issues. We're complex creatures with potential for good and bad, we struggle learning new perspectives and seeing worth in others. Hearing these age-old philosophies, like the ones Yoda espouses, are always a welcome call back to our real humanity.

Speaking of real humanity, that's what Luke awakened in his father when they faced each other in Return of the Jedi. But when Anakin Skywalker first became Darth Vader, his outlook on the world was all wrong. He had been deceived by the Emperor to see the world in simplistic terms—to see people and things as either good or bad, weak or strong, you know, absolutes. This transformation of vision became physically complete when he donned his mask.

Vader no longer needed his human eyes. To him, the world was mechanical. These are the eyes he would trust from now on.

With his son's example, Anakin could now see the truth and accepted himself. It came at the cost of his life because he was an already damaged human. But in the end, his final wish was to see without his mask and look on his son with his "own eyes."

Near his death, Anakin wished to see without his mask. © Lucasfilm.

Vader had lived behind the mask and had separated himself from the world. His eyes had deceived him, but because of his desire for power, he believed the lies of the Emperor to get what he wanted and make the world around him the way he wanted it to be. But that meant not considering the humanity of others. That meant not seeing the connectedness of the world, not seeing the souls and complexities of other people. He couldn't see it because of his mistakes, which he couldn't accept. Instead, he latched onto a vision of the world that rejected subtlety. But because of Luke's vision and beliefs, Anakin could finally see that the Vader persona he put on was nothing more than a means to an end. He finally let go of all that and ended it by shedding the last thing that kept him from real sight.

There are so many examples of this throughout the saga but I'll end now with just another obvious example: Chirrut.

Chirrut, though blind, is guided by the Force. © Lucasfilm.

Chirrut may be blind, but he sees the truth better than most. He trusts the Force, he can sense goodness in others, he can see into the hearts of his friends. Although he is not a Jedi, the Force aids him in protecting himself and others--he can fight off Stormtroopers and shoot down TIE Fighters. In Rogue One he shares a jail cell with Cassian Andor and says to him, "There is more than one sort of prison, Captain. I sense you carry yours wherever you go." Cassian is taken aback because this may be true about him.

Cassian probably does feel constantly trapped. He does feel, like others, imprisoned by the Empire, but he may feel guilt inside him because he says he's "done terrible things on behalf of the Rebellion... every time I walked away from something I wanted to forget I told myself it was for a cause that I believed in." Without physical sight, Chirrut was able to see more about Cassian than he could see himself and that insight gave Cassian self-awareness that he could not have reached alone.

We often can't see our own faults, but sometimes that's all we see. Often, someone from outside ourselves can see us better, or from a larger perspective. We must contemplate these things to see a better picture of ourselves and our world.

Brought to you by DIFF

Okay so we got a bit deep in this article but I was inspired to consider these ideas because of a partnership with DIFF, the charitable eyewear company. When I thought of "seeing better" (or cooler) with Star Wars-styled glasses, my mind jumped to all the times the movies touched on the subject of true vision. It wasn't hard to find since it is a central (if not the) central theme of George Lucas's stories. There's more to people and the world than just what we see. But to see well, there is some technology in eyewear that can help with the physical act of seeing whether it's sunglasses, blue light protection, or prescriptions.

You can get glasses in many places and DIFF offers a couple things not found elsewhere. First, their proceeds go to charity. Their mission includes using "fashion as a force for good. In just the past 7 years, DIFF has provided over 2 million people with the gift of sight through medicine, eye exams, glasses, and more. --- Since 2015, DIFF has donated over 1,500,000 pairs of reading glasses to individuals in need around the world." Learn More About DIFF here. Second, they offer unique styles including Star Wars! 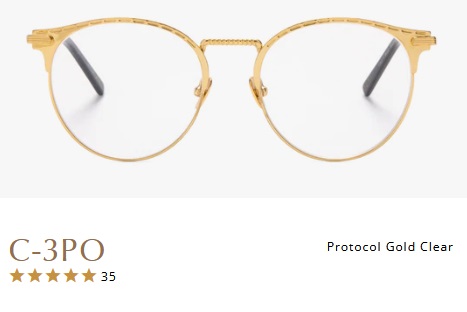 C3PO styled glasses from DIFF. There are several other models to choose from including Boba Fett. Photo from DIFF Eyewear.

The details are mostly subtle and that makes it fun when you look closer and see markings, colors, lettering, and other decorations that resemble your favorite Star Wars characters without making them look like costume pieces. Browse the DIFF Star Wars Collection, and their many other collections (from other pop culture properties to just standard glasses) and you may find a pair you must have. 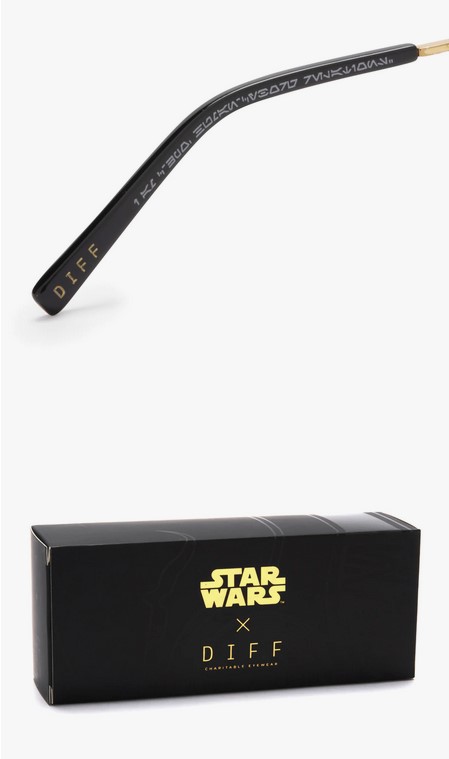 Small details and a cool case are pretty neat for fans. Photo from DIFF Eyewear.

Regardless of your eyewear, heed the teachings of Yoda and Obi-Wan and see beyond the surface of people and things to discover the deeper truths of our universe.