The Halcyon is open for business! Guests at Walt Disney World can now board the Galactic Starcruiser and feel like they're traveling through hyperspace in a galaxy far, far away. Here on Earth, we're reeling in sticker shock at the price of that lightspeed journey and wonder, "Is it worth the cost?" I can't answer that since I haven't been on it, but what interests me here, as I observe this stuff from afar, are the storytelling elements that this new attraction presents.

So, even if I can't go (yet), I can read up on how the events of the Halcyon fit into the overarching Star Wars timeline. Apparently the ship has been in operation a long time and guests are stepping into some history well after its maiden voyage.

Be sure to check out Alan Dalinka's Preview of Galactic Starcruiser in his recent Walt Disney World Update.

There's no movie tie-in and the ship hasn't appeared in any streaming series, so where's the story of the Halcyon? Since the ship exists for so long, it can be found in several parts of the timeline.

The "High Republic" era takes place a few hundred years before the movie saga and the Halcyon is there in The High Republic: Mission to Disaster, a novel by Justina Ireland.

In the New Republic time, after the events of Return of the Jedi (where you'll find The Mandalorian and The Book of Boba Fett) there will be The Princess and the Scoundrel, a novel by Beth Revis debuting August 16. That book tells the story of Han Solo and Princess Leia's honeymoon on the Halcyon. I mean, where would be the ideal honeymoon? Hoth?

There is also a five-issue limited comic book series called Halcyon Legacy written by Ethan Sacks with art by Will Sliney, which details the ship’s various incarnations through the centuries. Here are 10 points (in no particular order) about that series' first issue as how it relates to the larger Star Wars galaxy of stories. 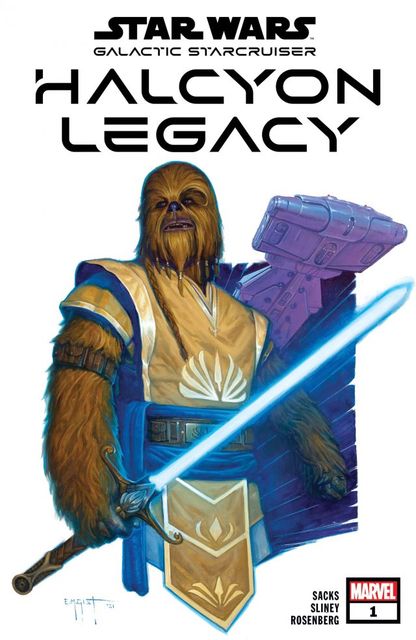 1. The Halcyon is Almost 30 Centuries Old

That's older than Yoda. Much older. He was about 900 years old. In our world we have cars that barely make it through one decade and this is a spaceship still in operation for almost 3,000 years with not much sign of phyisical wear! This means…

2. The Halcyon was Around in the High Republic Era

Coincidence? No, it's so this ship can basically tie into the complete known timeline saga of Star Wars. Not bad for a "cruise" ship that's said to have survived the Great Hyperspace Disaster, a cataclysmic event in the High Republic stories that set the Jedi into action to maintain peace. The events of the flashback in issue #1 take place shortly after the disaster, when Jedi are everywhere as protectors against the Nihil and their swarms of pirates. On board is Jedi Master Nib Assek and her Jedi Padawan Burryaga, a wookiee, and they lead the counterattack of the Nihil trying to raid the ship for something valuable.

3. The Halcyon was Built on Corellia

Does that planet sound familiar? It's the same building place of the Millennium Falcon! The film, Solo: A Star Wars Story begins on Corellia, where we find Han trying to break free of the life in the criminal underworld. Corellian ships have had a good reputation since Star Wars first came out and Han bragged about how fast the Falcon could travel. Considering how much the Falcon has been through and that it's still kicking its way from one side of the galaxy to the other, the Halcyon, even after nearly three centuries of charters, is a solid star cruiser. 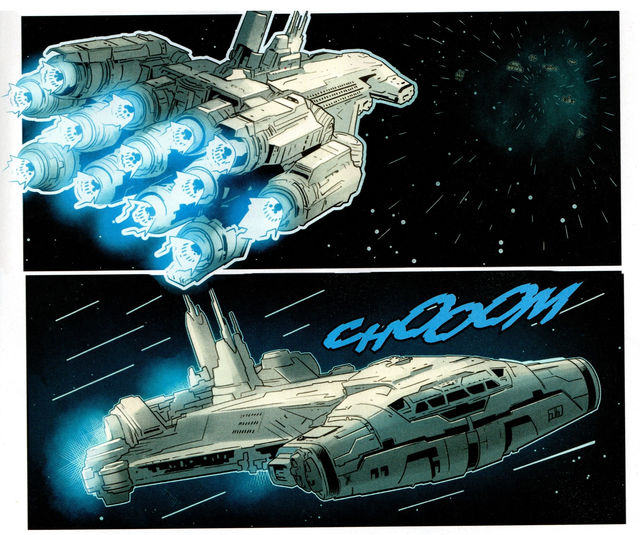 Halcyon back and front from legacy comic book. © Disney/Lucasfilm/Marvel.

Disney Imagineers designed the Halcyon with inspiration from Princess Leia's Tantive IV as seen here in ROGUE ONE. © Disney/Lucasfilm.

4. The Halcyon is Said to be Reminiscent of Leia's Tantive IV

Like many of the design choices in Galaxy's Edge where Disney artists drew inspiration from the movie saga's aesthetics to build Batuu, Imagineers for the Galactic Starcruiser looked to spaceship designs for making the Halcyon. They went back to the very beginning. The very first ship onscreen in any Star Wars media was in the first moments of Star Wars in 1977 when Princess Leia's ship raced across the stars to try and escape the pursuing Empire in its gigantic Star Destroyer. The Halcyon, in fiction, is older than the Tantive IV, but in our world it's backwards with that first little ship's cues appearing in the new resort hotel where designers added details "evoking the glitz of high galactic society"* along with the lived-in look of Star Wars.

5. The Halcyon's Current Place in the Timeline is Between Episodes 8 and 9

Set between The Last Jedi and The Rise of Skywalker, this puts the Halcyon and its terrestrial visitors right in the middle of Lucasfilm's Disney-owned trilogy. It naturally matches the time setting of Galaxy's Edge with First Order Stormtroopers, Rey, and Kylo Ren in their most-familiar portrayals. It makes sense to have the Halcyon flying around at this time. You couldn't set it at a different period than Batuu but portraying the ship with a long history enables Disney to pull in elements from all Star Wars stories without the need for time-traveling shenanigans.

6. The Ship is "Restored" by the Chandrila Star Line

You can think of the Chandrila Star Line as the Titanic's White Star Line, the organization overseeing ships and their travels. Although the Halcyon is old, it hadn't hit an iceberg, but has certainly seen its fair share of trouble in its long history. The official press facts state that the Halcyon has been restored to its former glory in order "to re-create its maiden voyage from the Core World of Chandrila to the far-flung Outer Rim destination of Batuu." This isn't just another cruise—it's a restored ship going back to celebrate its first trip in space. Only the ship and the onboard logistics droid would remember that day. Speaking of which…

D3-09 was there when the ship was first attacked by the Nihil in the comic book story on one of the Halcyon's earliest voyages. D3 is the storyteller and keeper of history. She will gladly recount these adventures when you board the Halcyon yourself and see her in person. To make it that long without having her mind wiped is quite an achievement and it would only make sense that atificial life could still be around after all this time. I wonder if she can read and speak ancient Sith runes?

D3-09 is the one in the comic book story to recount the flashback to the new passengers. Those new passengers are ones that she remembers, as well. She welcomes them and their family in a way similiar to Disney cast members and well, she's now a cast member in our world now, too.

8. The Hyperspace Compass is a Valuable Item on the Ship

Since it is a luxury liner, the Halcyon often finds itself the custodian of odd valuables. In the comic book, however, the Hyperspace Compass isn't the purpose of the attack by the Nihil. It turns out the pirates are after the Chandrila shipyard's security codes, which must be coming into play in the following issues of the story. The Compass itself, however, is on display on the real ship that Earthling guests can see for themselves! 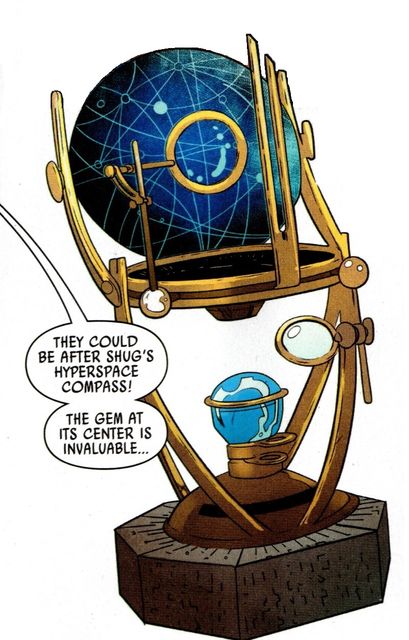 The Hyperspace Compass is an object of much curiosity in the comic book, but can also be seen on the Galactic Starcruiser by Disney guests. © Disney/Lucasfilm/Marvel.

9. The Season for the Ship's Lightsaber Training Attraction

During the attack in the flashback of the comic book (265 years in the past), Jedi Assek and her padawan successfully defend the ship against the marauding Nihil. In other words, there were no fatalities even though the characters didn't know the enemies stole valuable information from the ship's computers. The ship's Lightsaber Training Pod was built on the ship as not only a means to thank the Jedi for their help, but to keep Jedi active during long journeys on the cruiser since Jedi would, from that point on in the High Republic era, be on board to continue the ship's security.

10. In the Present Time, the Ship is Also Under Attack by Pirates

The comic book has a framing story in the "present" time (between Episode 8 & 9 time) where the ship is under attack by new kinds of pirates led by "Crimson Jack." Immediately I guess this is a combination of Captain Jack Sparrow from Pirates of the Caribbean and Crimson Dawn from Solo: A Star Wars Story. In the comic story, Jack says there's a Resistance person on board that the First Order are looking for, and this would mean rewards. Crimson Jack's motivation reminds me of a scene from The Force Awakens when Han Solo is approached by a gang to which he owes money. The gang leader tells Han and Chewie about an all-points bulletin from the First Order looking for a BB droid and two fugitives—which could mean a reward if they're captured. We don't get much more about Jack since the comic book ends on a cliffhanger as he fires on the Halcyon. This puts the Halcyon's Captain Riyola Keevan into action. And like several people and objects mentioned above, guests can meet Captain Keevan in person. 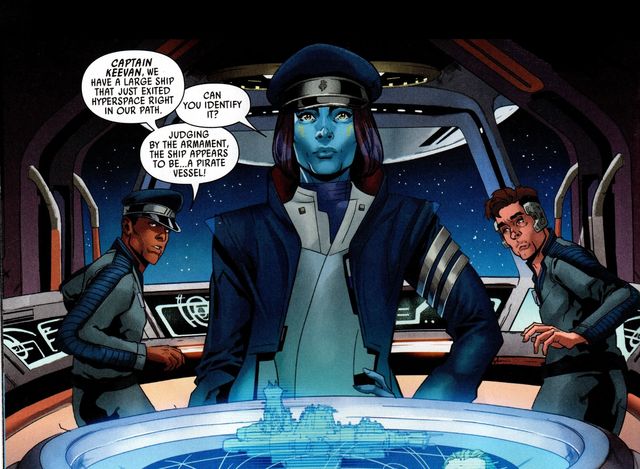 Captain Riyola Keevan stays calm and in charge on the bridge of the Halcyon. You can also meet her in person when you board the Galactic Starcruiser. © Disney/Lucasfilm/Marvel.

The comic book certainly helps set the stage of the Galactic Starcruiser by giving readers a glimpse into its long history in the galaxy and how it touches on several points in the Star Wars timeline. Like C-3PO and R2-D2 appearing in every movie of the Skywalker saga, the Halcyon, we can imagine, was always out there flying through the galaxy while all the great adventures of Luke, Han, Leia, Finn, and Rey were taking place. Other substantial events may have taken place aboard the ship that we have yet to learn about, including this, which appears to be a lightsaber battle between Anakin and Asajj Ventress! 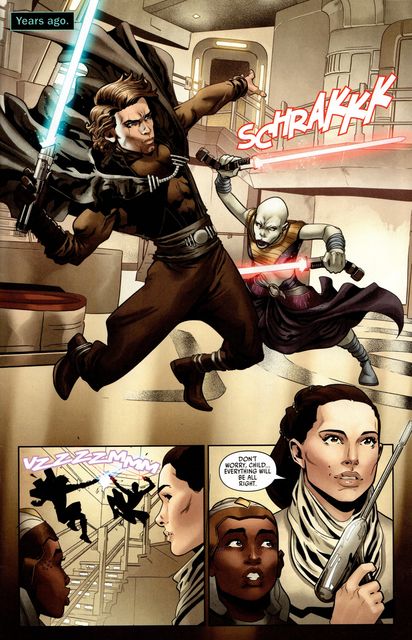 Anakin fights Asajj Ventress in some past incident aboard the Halcyon—the ship's history covers a vast area of the Star Wars timeline. © Disney/Lucasfilm/Marvel.

* From Galactic Starcruiser Press Fact Sheets: "Built nearly three centuries ago on Corellia—in the same shipyards that produced the famed Millennium Falcon—the Halcyon starcruiser offers an expert crew with deep knowledge of the galaxy’s space routes. Its clean, elegant lines are reminiscent of Leia Organa’s personal ship, the Tantive IV, while evoking the glitz of high galactic society. Over its lifetime, the ship changed hands many times and was used for various purposes, from covert diplomatic missions to Imperial engagements to Hutt-sponsored casino cruises and more."