Those who read Alan Dalinka's Walt Disney World update on March 15 know that he graciously allowed me to be his sidekick at the media event for the Epcot International Flower and Garden Festival. I really enjoyed the experience and got to meet some really nice folks from the Disney community (fellow social media and cast members) and get a great behind-the-scenes view of the festival.

I got to stroll around World Showcase Lagoon and sample all the food and beverage offerings available at the festival (not as extensive as the Food and Wine festival, but pretty good), got to attend the media behind-the-scenes event and meet the people responsible for the food and beverage, the topiaries (the highlights of the festival—please check out Snow White and the Seven Dwarfs near Germany when you go) and, of course, the merchandise. We got to attend a nice event with food and music in the courtyard art the UK pavilion. I also fanboyed out over meeting Disney ambassador Raevon Redding, whose Disney Parks Blog and YouTube videos I love. 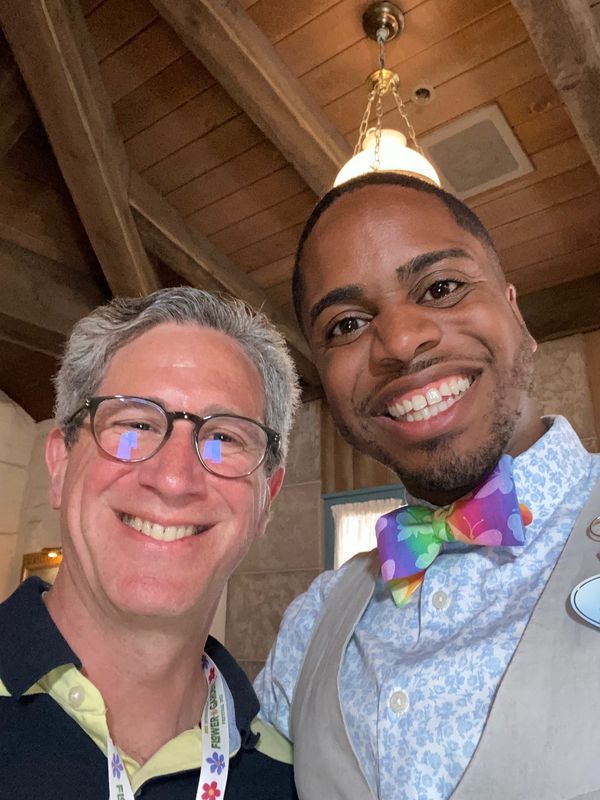 Me being a fanboy with WDW Ambassador Raevon. Photo by Gregg Jacobs.

You know that merchandise is my wheelhouse, so of course I have to talk about that. I did a quick overview as part of Alan's weekly update, but elaborate a little more. Disney had a really nice set up at the event to show off festival merchandise, and friendly cast members to take us through what was available.

The items this year are currently grouped into three different categories: Orange Bird, Mickey Mouse Home Garden, and Spike the Bee (who I don’t remember from previous years). Each has different themed items. Overall, I found a pretty wide variety of merchandise, so anyone can find a souvenir, though for the more interesting stuff (to coin a Chris Barry phrase), it definitely helps if you’re into the subject matter (gardening tools and galoshes available for the Disney gardening fan). 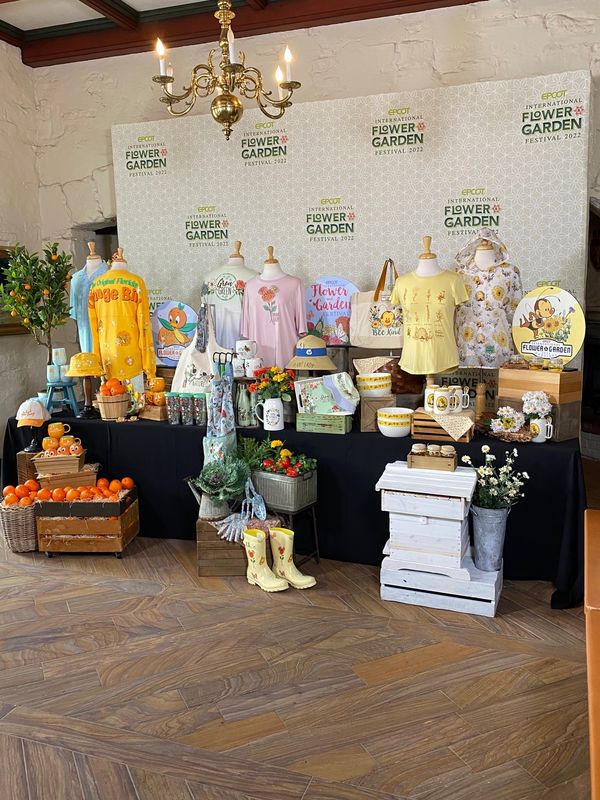 Before I get into too much detail, I'd like to give a quick aside about one of my personal favorites, Orange Bird. I love the story of Orange Bird and how the Imagineers brought him back to life. Long story short, Orange Bird was the mascot of the Florida Orange Growers, the original sponsors of Walt Disney World’s Enchanted Tiki Room when it opened with the park back in 1971. In the late 1980s, the sponsorship ended, and he was then retired and not used for almost 20 years.

In the early 2000s, they picked up on the character at Tokyo Disneyland, and he became popular again. The Japanese are very into kawaii (which means "cute") culture, so Orange Bird was a perfect fit (go see the Kawaii: Japan's Cute Culture exhibit at the Bijutsu-kan Gallery in Epcot's Japan pavillion to see what I'm talking about).

In response, Disney's Imagineers dug the original figure out of a crate in the archives somewhere, and it was decided to bring him back in the U.S. as well. He was restored and assumed his original location in the Magic Kingdom at the Sunshine Tree Terrace, where he stands today. Sensing a goldmine, Disney then started branding merchandise to our little bird friend, and now he’s one of the mascots of the festival. 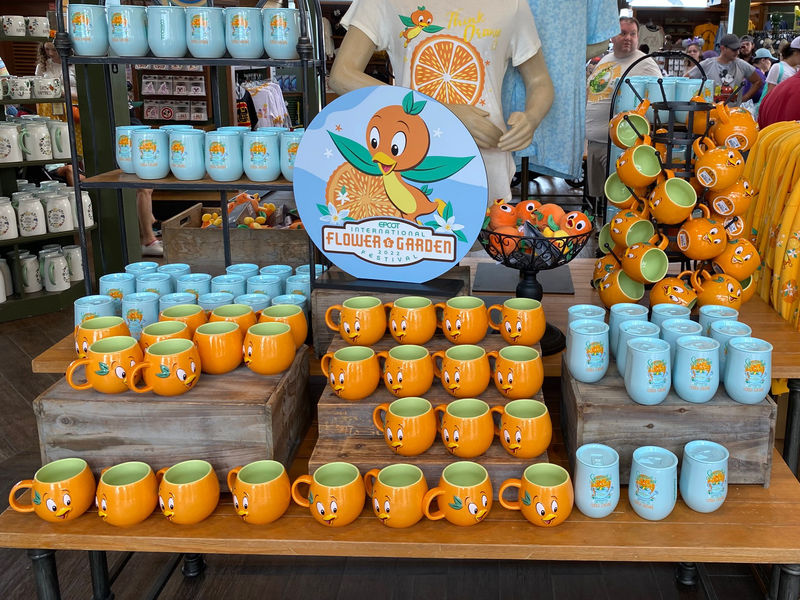 The festival has a ton of Orange Bird-themed merchandise. Photo by Gregg Jacobs.

Getting back to the overall product line, if you just want a general festival souvenir (and there’s nothing wrong with that), there are the usual collection of spirit jerseys and mugs, though maybe a little less variety than in years past. If you want something more interesting or if you're very into gardening, I’ll call out a few of the newer and more interesting items.

Bucket hats are big this year (and I actually have seen more and more of them out in the world in general). This collection has two of them: one themed to Orange Bird (there’s also a baseball cap) and a second to Mickey and Minnie’s Garden. The Orange Bird hat says "Squeeze Me" (so you’re taking your chances wearing it!), and the Minnie hat says “Plant Lady." These are each yours for $29.95. 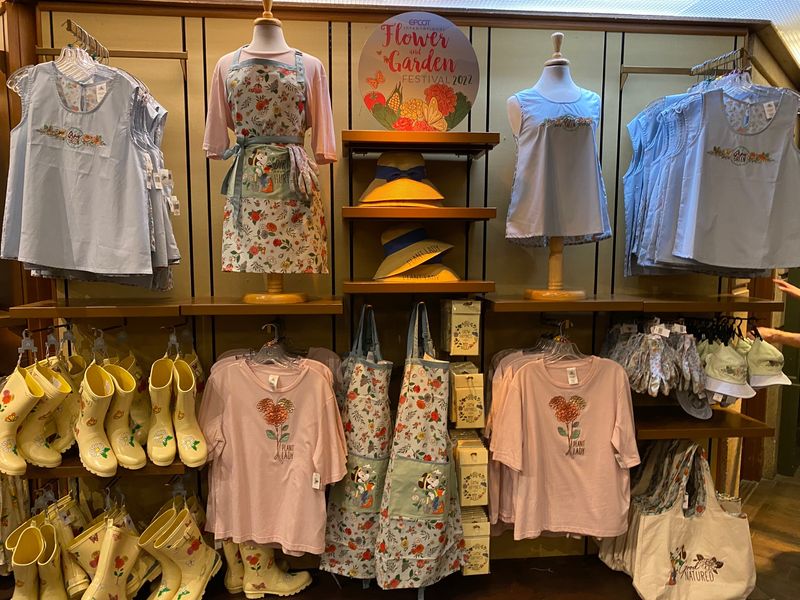 The clothing items are available all over Epcot. Photo by Gregg Jacobs.

For those who like to see their prospective clothing in action before buying, we were given an unexpected treat at the media event party this year. You know that as all this was going on, I was trying to figure out what I wanted to buy, and I was settling on a large mug/vase/planter that says "Grow Happiness". As I was thinking about it, someone walked past me holding the planter. I was like, see, that guy likes it, too! But then I realized he was a model hired to show off some of the merchandise! 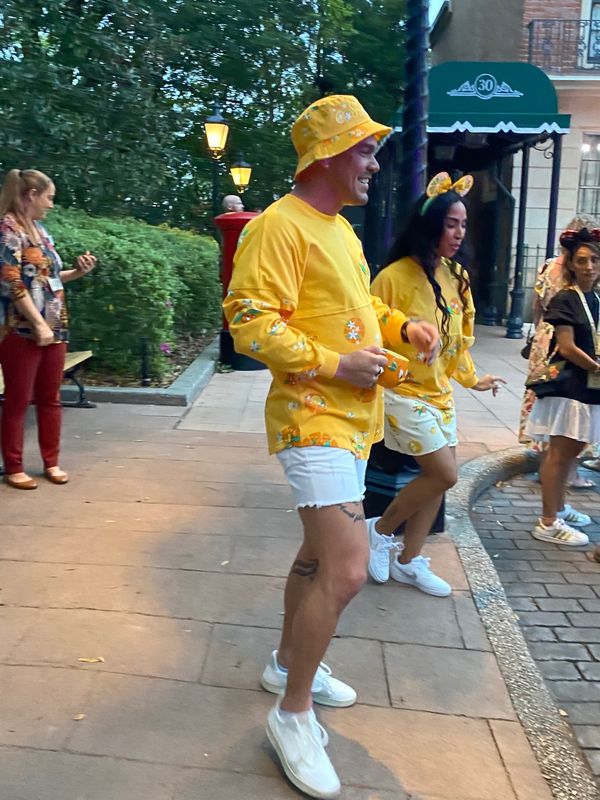 We got a fashion show of some of the items during the media party. Photo by Gregg Jacobs.

He and a few others, decked out in festival clothing and carrying some of the items, then gave us a fashion show so we could see some of the items in action. Alan tells me they've never done this before, so I got to see something new.

Moving on, Disney also has a partnership with Corksickle, and there are a number of different branded items. They specialize in reusable thermal drinkware that’ll keep your beverages hot or cold. There are several of those. There are actually a lot of drink holders in general, also including water bottles and the aforementioned mugs.

New this year are a pair of galoshes, subtlely Mickey-themed with a hidden (sort of) Mickey plant and other symbols of the festival like daisies and butterflies. These go for $59.99. 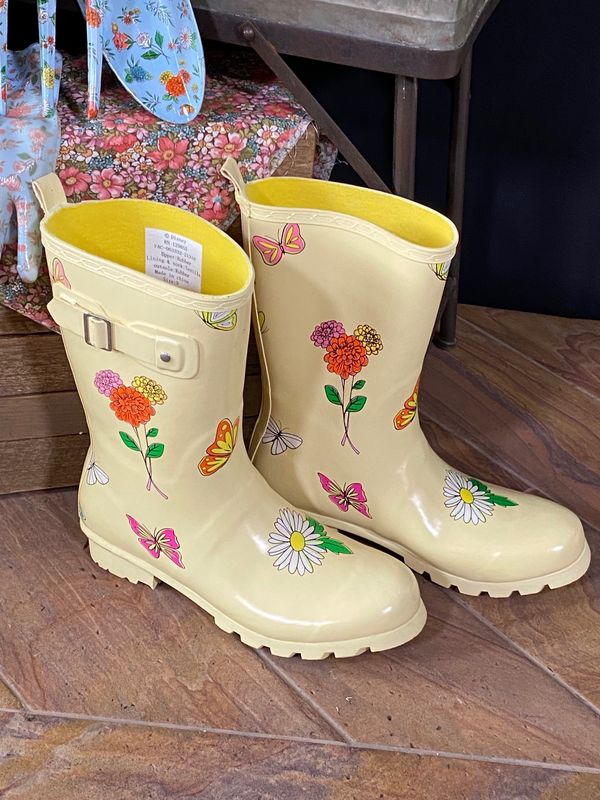 The Mickey themed galoshes are new this year. Photo by Gregg Jacobs.

If you like Spike the Bee, there’s a matching tea set (mug and spoon) along with a matching bowl.

If you're actually interested in gardening or giving it a try, there’s a set of garden tools (watering can, gloves, apron, hoe, and pick) for sale. They seem to be well made and themed. 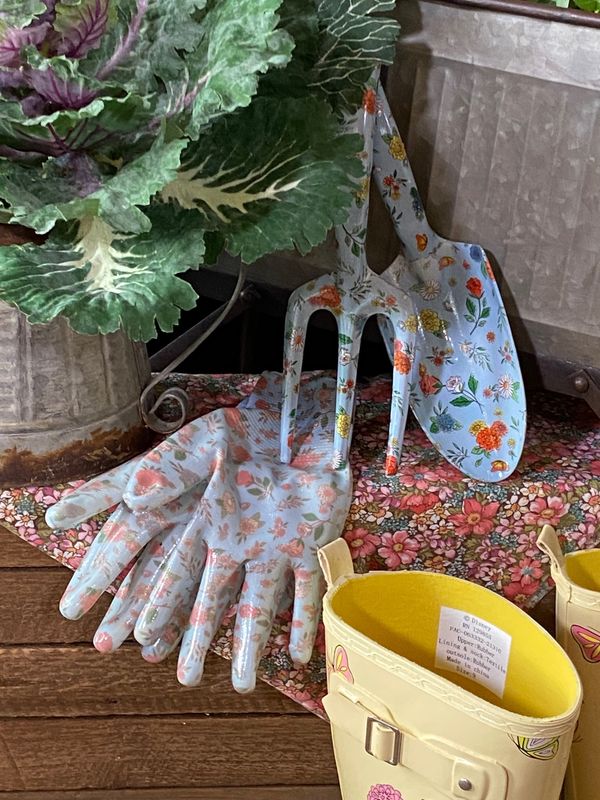 Only thing I'll say here is to admit that I'm far from a home gardener. I did this week, however, need to plant something in my front yard. I didn't pick up the tools at the festival at the time, because I didn't know I was going to have to plant something, so went to Walmart and bought a trowel/pick set for a lot less money (though it was also a lot less pretty).

At the event, they shared with us the "official" items, but walking around the lagoon and seeing a lot of the festival booths, there's actually a lot more than that for sale. For example, logically, there was a booth that focused on selling live plants, including small palm trees, of which i have a few growing in front of my new house in Florida. 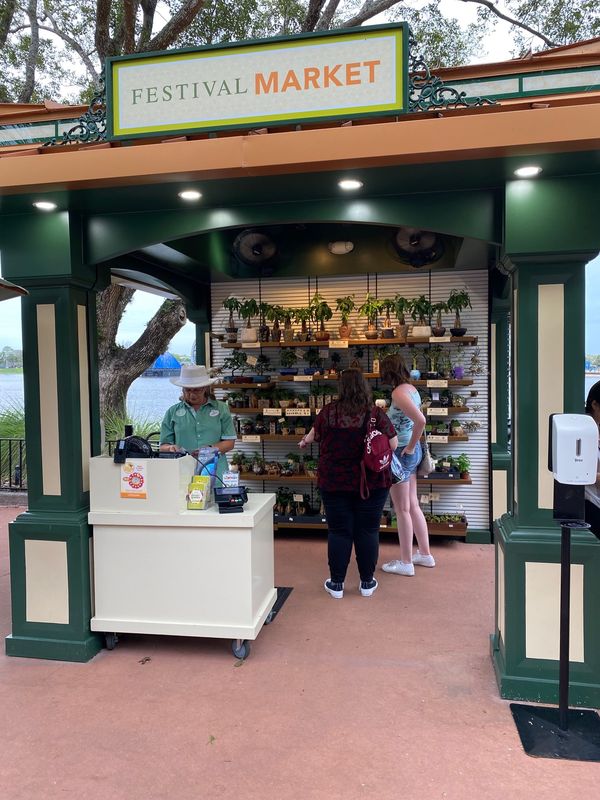 The festival has a booth dedicated to selling live plants. Photo by Gregg Jacobs.

Maybe a little less logically, but following corporate synergy, there was a booth selling Basin products. Basin makes soaps and bath products and has a large location in the Marketplace section of Disney Springs. Here they were selling "make your own" bath salts and other related items. 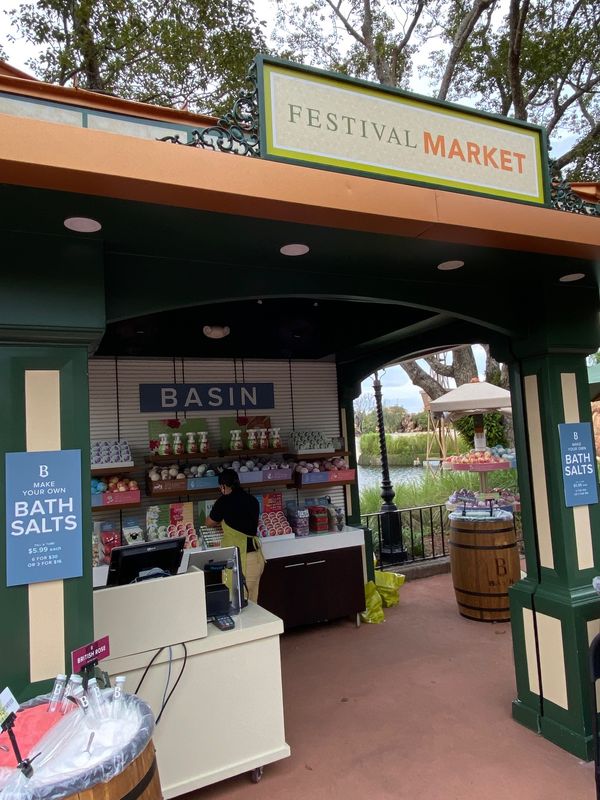 Basin, which also has a location at Disney Springs, has a booth at the festival. Photo by Gregg Jacobs.

There are a few important notes on festival merchandise: It's not available online at Shopdisney.com or at any other sale locations—only at Epcot during the festival. Also, like all Disney merchandise, it’s available while supplies last—so follow the rule of if you want it, grab it, because it might not be there next time.

Also important, due to the length of the festival (a whopping four months, from March 2 through July 4), there will be new merchandise added over time. The festival passport shows two additional collections—Mickey Mouse and Minnie Mouse and Figment’s Garden—both marked as "coming soon," so keep checking back.

Overall, I'd say there’s maybe not as much as I’ve seen in the past, but there’s an interesting group of very colorful merchandise that’s worth checking out—especially the gardening and home goods. 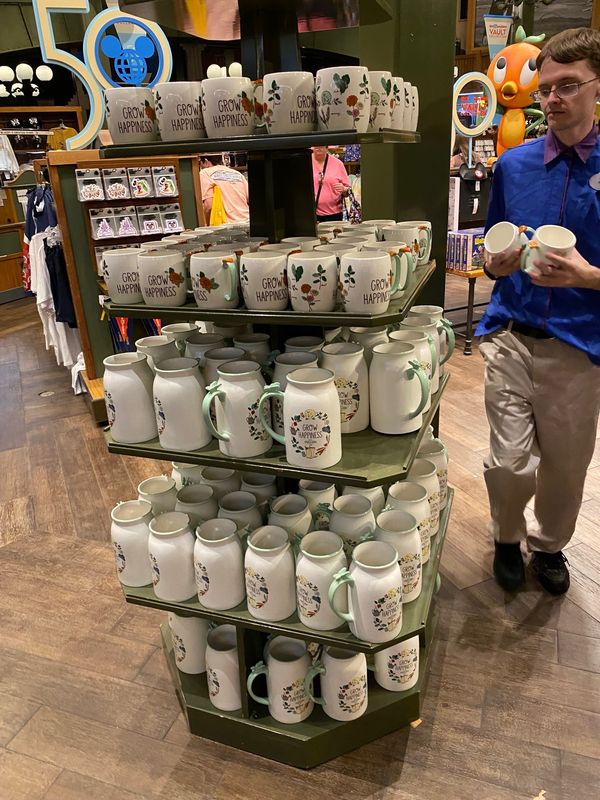 In case you were wondering, yes, I did go back and buy the planter (bottom shelves here). Photo by Gregg Jacobs.

Thanks as always for reading, and please feel free to leave comments about the Festival or anything else you'd like. See you real soon.