My first trip to Walt Disney World was as a wee child back in (gulp) 1972, the year after the park opened. I've been there many times since, trying to get there at least a couple of times per year in recent years.

I've always approached these visits as special occassions and would try to do as much as possible while I was there. There was always a plan to hit our favorite eating spots and as many E-ticket rides as possible. I visited more than most, so maybe this was less true with me than many—but the idea was to go for quantity, rather than quality, since I wanted to squeeze as much out of every minute that I was there.

I knew I'd be down in Orlando for at least a couple of months, so I decided to try a different tactic—to see Walt Disney World through the eyes of a local (a couple of months ago, I talked ahout some big changes happening in my life, including a for-now temporary move to the Orlando area). As opposed to running around all day trying to cram in as much as I could, I wanted to take my time and focus on a few of my favorites each visit, instead of trying to see it all at once. I wanted to take advantage of being here by making quick trips, maybe seeing a concert, grabbing something to eat and then heading home. I wanted to focus on new things as they opened without having to wait and get on a plane. Most importantly, I wanted to explore the place in ways I couldn't before with limited time by trying experiences that were new to me.

I know not everyone can do this. For some people, their Orlando visit is once a year or once in a lifetime, so obviously your goals will be different. It's just that seeing the place from this point of view has opened my eyes to a few things, and I think my experience can provide some ideas, whether you're planning that once in a lifetime trip or live down the street.  I'm going to stray from my usual formula here and share these random thoughts that hopefully will get you to think as you plan your visits.

So come with me and my Florida resident Pixie Dust Pass (more on that later) and let's see what I found.

First, I'm going to tackle the elephant (or rather big blue Genie) in the room. Disney Genie, Genie Plus and seprately paid Lightning Lanes are here, for better and for worse. For those who don't know, Genie is the new app/system recently put in place to help guests plan their day at the parks.

For today, I'm going to focus on the Genie+ feature, which essentially replaces the old, free Fastpass system. For $15 per day, per guest, you can, through the My Disney Experience smartphone app, get assigned Lightning Lane times for one of a number of attractions at the park you are visiting. You can get one starting at the beginning of the day (7:00 for Disney resort guests, park opening time for the rest of us poor slobs—though I've tried and gotten them earlier a few times, even as a passholder). You can then get an addtional Lightning Lane time every two hours until park closing.

Is it worth it? In my humble opinion and experience, that depends on the park. As always, your mileage may vary depending on your personal tastes and goals. Below is my take park by park:

Magic Kingdom – Worth It

The Magic Kingdom has volume. By that, I mean it has a lot of rides and a lot of rides means people have many options of which Lightning Lane to go for. This spreads the Genie+ holders out, and as a result, most rides are available on the service until pretty late in the day. I've used Genie+ here several times, and each time, I got Lightning Lane passes for five rides, which is actually pretty good. These included the biggies (the mountains—Space, Splash and Big Thunder), Peter Pan, Buzz Lightyear, the Haunted Mansion, and Pirates of the Carribean. In between my Lightning Lane times, I went to the shows that have short waits, like Mickey's PhilharMagic and the Hall of Presidents. Because of Genie+, I got in a pretty full day.

Epcot – Not Worth It

The situation at Epcot is the opposite of the Magic Kingdom in some ways. There aren't as many rides, so everyone who has Genie+ is gunning for spots on the same rides, namely Frozen, Soarin' and Test Track. Remy's Ratatouille Adventure has an individual Lightning Lane entrance you purchase with a separate cost (and doesn't require Genie+), so doesn't count, and this is being written ahead of the Guardians of the Galaxy opening, so not sure how that will impact the equation. I've tried several times, and always found myself able to grab one of these in the morning, but by the time my next two-hour window rolled around, the big rides either weren't available at all or only for very late in the day. The only rides left available for Lightning Lane passes were rides like Journey Into Imagination and Finding Nemo, which, while great, usually have fairly short waits anyway and the Lightning Lane isn't needed.

Hollywood Studios – A Qualified Yes (Worth It)

This park has a lot of the same issues as Epcot with Genie+. There are a few rides everyone wants that fill up in the system really quickly. You'll get one of the biggies in the morning (Tower of Terror, Toy Story Mania, Slinky Dog Dash, Smuggler's Run, Runaway Railway), and then maybe get one more in before they fill up. The reason for the qualified yes is that Genie+ may provide your only chance to ride some of these. The wait times in this park have become excruciating on a busy day. The Tower of Terror was always somewhat popular, but I've visited several times in the last couple of months, and I've seen wait times of up to three hours, which was previously unheard of. Ditto with some of the others. Hollywood has some of WDW's best rides, and if you're willing to pony up $15 to skip the line or one of two of them, it's likely worth it.

Animal Kingdom – A Qualified Yes (Worth It)

I'm going to repeat my Hollywood Studios spiel here. Everyone wants Nav'i River Journey, Expediction Everest, Killamanjaro Safari, and the passes fill up fast. If you want to get to ride one of two of them without a wait, and are willing to pay $15 for the privilege, then it's worth it. That said, there are a ton of wonderful attractions at this park that don't have much of a wait and beautiful scenery, so if you want to skip Genie+, you can still have a great day. Wait the hour for the safari and skip the other E-ticket attractions.

When visiting the Disney theme parks, we all have a tendency to do what I call a commando day. We go from dawn to midnight and run from one major attraction to the next, without stopping to see all the cool stuff in between that might not have quite as high a profile. In the last couple of months, I've tried to explore these a little more. 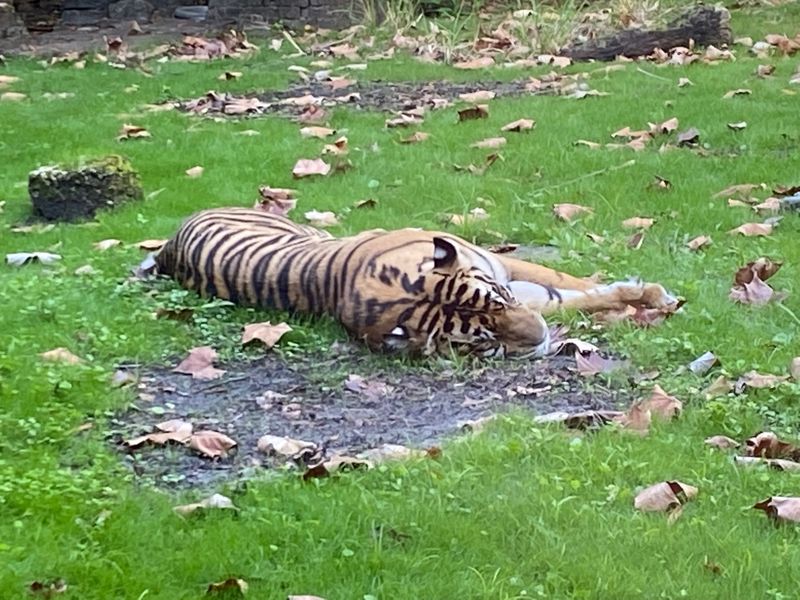 Things Outside the Parks

Some things you could do outside the parks:

Thumbs-Up in the Parks 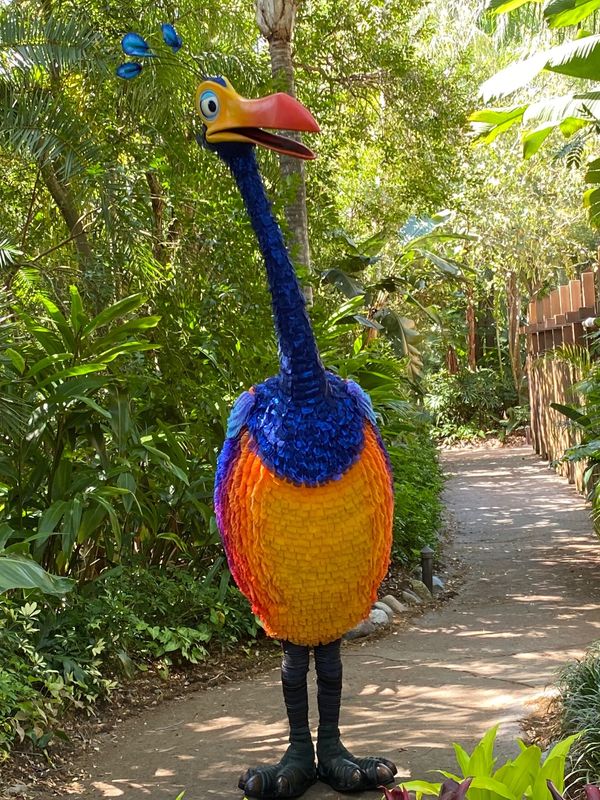 It's Kevin! Photo by Gregg Jacobs.

…The lack of upkeep and maintenance in the parks is getting to be noticable and is not OK. I've had roughly a dozen park visits over the last couple of months, and there wasn't a single day where several attactions didn't go down for extended periods of time. I waited over an hour for Remy to have it break down when I reached the front of the line. Same with Frozen and Test Track. My first Rise of the Resistance experience was getting up at 7:00 am to book a 7:00 pm Lightening Lane, only to have it break down when I arrived (I also loved the cast member who told me there were no Genie+ refunds if the ride breaks down—not true, but still).

Even when I do make it on to the ride, a lot of the time some of the effects aren't working. I rode Rise again to find the lightsaber effect where the top of the ship is cut open wasn't working. I rode Splash Mountain, and the audio was out for the back half of the ride. I know I said that the rides are getting increasingly techologically complex, and you can argue that's why this keeps happening, but I suspect it's something else.

My background is in financial planning and analysis. That makes me the accountant-ear in my industry (banking). For the last 30 years, I've been the finance guy the business people hated, the one who kept reminding them about budgets and to keep their spending in check. I was also the bad guy who sometimes had to tell them to cut costs and that they couldn't always do everything they wanted. The point is that I understand the need to make a profit and make investors happy. But it also means I can smell budget cuts a mile away—and my strong suspicion is that Disney has cut its maintenance budget in a big way.

My increased visits of late have shown me that a down attraction wasn't just me having bad luck, but have rather, an everday experience. Rides break down, trash cans overflow and shows are cancelled at the last minute.

Disney is a premium experience with a premium price tag, so we have a right to expect a certain level of service.  Again, I can go back the next day, but the Star Wars fanatic who saved all year and spent thousands of dollars to visit Galaxy's Edge has a right to be angry if Rise or Smuggler's Run goes down for the day. If that person starts spreading the word and doesn't come back attendance drops and that's not good for the bottom line, either.

Disney has been through these periods before and has seen the light and come back. I believe they will again. And there's still so much to love here, and I'm glad I'm getting this opportunity to explore Walt Disney World in ways I haven't been able to before.

I hope you've enjoyed my slightly different perspective, and I've given you a few tips that will help you on your visit.  See you real soon!