Welcome back to another Disney Top 5. As always, I hope you are all safe and healthy out there.

The time has finally come. I have dates set aside for finally returning to Walt Disney World this summer! My sons and I took a boys weekend together down there in the Fall of 2019 and thanks to – well we all know what's been going on since then – we haven't been back. One of my sons is starting the Disney College Program in late August, so we're combining moving him in with a well-earned week off drenched in the magic. Of course, with him living and working on property for 5 months, I'm looking forward to some more visits this coming fall for sure!

That said, we are in the planning stages right now and nobody loves planning a trip to Disney better than yours truly. Disney recently announced a tasty discount for Disney+ subscribers, which we, of course, are. 25 percent off select deluxe rooms on property sounds good to me. On our last trip my twin boys and I stayed at Port Orleans Riverside, one of our old favorites and a resort we haven't been to in a long time. As I write this, we aren't committed to a resort just yet. If my daughter joins us for a few nights we will need a room that sleeps five and that does restrict our choices a little. I'm seriously considering The Riviera, one of Disney's newest DVC resorts because it has a 5th pull down bed for my daughter, among many other reasons such as Skyliner access, the rooftop restaurant and view, and just the whole "newness" of it all. It'll be a little bit of a splurge, even with the discount, but we haven't all been away together in several years so it'll be worth it.

Of course, a place like Walt Disney World is constantly changing and evolving, even when there's not a global pandemic raging. But since we were last there in 2019, so many things have changed that I feel like despite all my past trips and extensive knowledge…I feel like I might not recognize the place. That prospect has me pretty excited actually. I'm looking forward to some new things and some interesting changes. Granted, it's not all good. I'm not particularly thrilled that I won't be picked up at the airport by Magical Express. I haven't had to find my own ride to Disney in a long, long time. I know I haven't even left home yet, but I feel it's pretty safe to say that I think this was a tremendous loss and a big mistake on Disney's behalf. I never complained about Magical Express…ever. Free ride to the resort? Luggage taken straight to my room from the airport? Cool video on board the bus to get me excited for my stay in the magic? Yes. Please. I'm in.

But aside from that negative piece of news, a lot of great things have been happening down there. And if you've been reading my articles over the years you'll know that I am not an internet complainer. I take the positive approach to my Walt Disney World stories and reviews because there's just so much to be positive about. So, as I plan my trip and I get more and more excited to go, let's take a look at all of the things that I can't wait to experience with my Top 5 things I can't wait to see on my upcoming Walt Disney World trip.

Let me just go on record as saying right now, with apologies to my daughter Samantha, who was a big fan, that I was fine with The Great Movie Ride being swapped out for this new attraction. I enjoyed it as much as the next Disney fan did for many years, but I felt it was time for it to either be overhauled or replaced. I'm a purist. If they ever decide to shutter Peter Pan's Flight, I'd probably be the first to chain myself to a ship in protest. 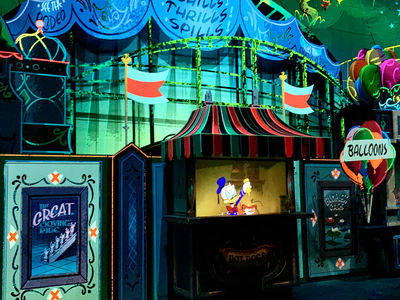 A shot of Donald from inside Mickey and Minnie's Runaway Railway. Photo by Alan S. Dalinka.

But this ride seemed like an excellent replacement. It was time for Mickey to have his own ride, for goodness sake, and the technology the Imagineers were touting seemed interesting and ambitious. Since its debut in March of 2020, I've stayed away from the YouTube videos and spoiler filled reviews. To me, it'll be brand new and I'm looking forward to it in a big way.

On the aforementioned Fall 2019 trip, my boys and I were fortunate enough to be at Epcot to say farewell to Illuminations. Being there for the final performance was bittersweet. After all, we've been enjoying this amazing show for many, many years. It was a fixture on all of our trips and always had quite an effect on me. It really was Disney magic at its finest. There was no better way to cap off a fantastic day at Disney than with a walk around World Showcase, watching the torches get lit and then settling into our favorite spot in Germany to watch the show. 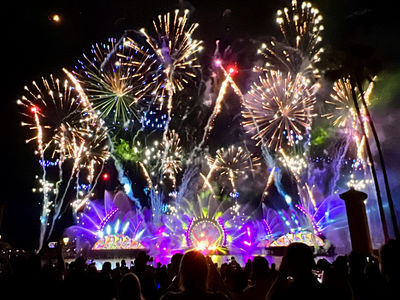 Harmonious explodes over the skies of Epcot. Photo by Alan S. Dalinka.

Illuminations is one of those things that I was very sad to see leave and I'm hoping that Harmonious does it justice. Once again, I've stayed away from the videos. I want it to be new and I want to feel it for the first time in person. Let's hope it becomes my new perfect end to a glorious Walt Disney World day.

It's not too often that Epcot's World Showcase gets legitimately expanded. Ratatouille is one of my favorite Pixar films so I'm already excited to hop onto this ride and see what they've done with it. But I'm equally as thrilled to be walking on new ground in France. Once again, I ask, how often can you say that? France has actually gotten bigger. 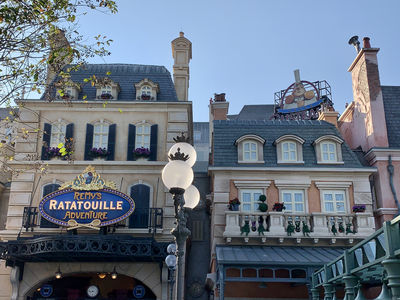 Remy's Ratatouille Adventure welcomes guests in a new section carved out of the France pavilion. Photo by Alan S. Dalinka.

2 - Guardians of the Galaxy: Cosmic Rewind

I'm a big comic guy. I've always been. We go to New York Comic Con every year. We hit the small conventions as well, and I've got way too many comic books in my basement all stored in long boxes and bagged and boarded. I grew up a big DC comics fan, not so much a Marvel fan. That said, in 2014 when the original Guardians film was released, I took my sons to see it just as I had the previous slate of Marvel films. The big difference was I grew up knowing who Iron Man, Captain America and Thor were. I had no idea who the Guardians of the Galaxy were, but a day at the movies with my kids was a cherished thing, so we went. That movie just blew me away. I was hooked on this ragtag team of heroes. They quickly became my favorites. 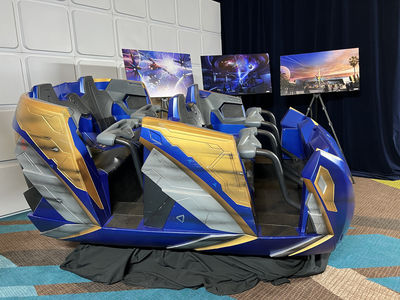 I hope I finally get to board one of these Cosmic Rewind ride vehicles this summer. Photo by Alan S. Dalinka.

So, when I heard that Disney was replacing Ellen's Energy Adventure – an attraction I firmly believed had run its course – with the Guardians of the Galaxy, I was instantly on board. The ride is opening on May 27th, which means it will be open when I'm there in August. I can only hope that I get to check it out. I won't watch any YouTube videos or read any reviews but I'll make sure to get myself on this one as soon as possible.

1 - Star Wars: Rise of the Resistance

In the previous selection I said that I'm a big comic guy. That's absolutely true. However, as big as a comic guy as I am, I think I'm an even bigger Star Wars guy. I've written about my love of Star Wars here on MousePlanet many, many times before. I was the perfect age for Star Wars in 1977. When me and the rest of my nine-year-old crowd saw it for the first time, we never let go. Remember that this was a time way before internet previews or teasers. I had no idea what I was in for when I sat down in that theater. When that star destroyer literally filled the screen in the opening moments of A New Hope, I had no idea what was happening. All I knew was that I was blown away and I wanted it to never end. And…it hasn't. Star Wars is ubiquitous in my life and I'm pretty sure it always will be. In 2019, on our last trip, Galaxy's Edge had only been open a short while, so it was all new to all of us there and we went crazy for it. I have a live photo on my phone of the moment I walked into the cockpit of the Millennium Falcon for the first time and all you hear is me giggling like a fool. I had wanted to walk into that ship for 42 years. In an instant, I was nine all over again. 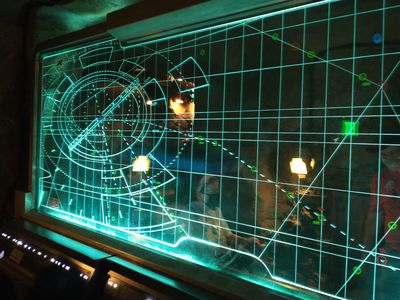 Set pieces like this radar screen hits the immersion button hard and makes you feel like you're really in the Resistance base. Photo by Todd King.

The one thing that wasn't open, of course, was the headlining attraction, Rise of the Resistance. Well, it's definitely open now and it will be in August, I imagine. So this will be the culmination of my living, breathing Star Wars immersive experience. I waited 42 years to "walk into" Star Wars and now I've waited almost three more years to come full circle with Rise of the Resistance and I absolutely can't wait.

We haven't taken this long of a break from Walt Disney World since we started going as a family in 2003. I was very fortunate during the pandemic to not get sick and to not lose a loved one to COVID. But it did take away things from me. It started to chip away at who I was. I didn't get to ski. I didn't get to go to concerts. I didn't get to go to comic conventions and I didn't get to go to Disney. I know people lost so much more. I know lives and livelihoods were forever lost. So, I'm not complaining. But you spend your whole life doing things that are a part of your very fiber. These are the things I do that make me happy, that make me who I am. Then they go away and you definitely lose pieces of yourself. I've been skiing and to concerts and to Comic Con and now I get to back to one of the most significant sources of happiness in my life and I'm counting the days until I can be there again. Once again, I won't and can't complain. I'm blessed and fortunate, but that doesn't mean I don't want to go back…and I finally am.

That's all for this time. As always, I'd like to hear what you have to say. Click on the link below to share your thoughts. Stay safe and I'll see you next time with another Disney Top 5.