Disneyland's State of the Resort 2022

Ken Potrock is a man with a firm grasp of numbers, which isn't surprising given his role as the president of the Disneyland Resort. Even so, one number in particular has come up in conversation that last three times I've heard him speak: 412.

Four hundred twelve is the number of days the Disneyland Resort was closed during 2020 and 2021 due to the pandemic. For Potrock, who took what he calls his dream job just two months into the closure, the number is a reminder—412 days with no guests in the parks… 412 days with thousands of cast members sidelined… 412 days waiting for a new normal.

This week, a new number has captured Potrock's attention: 365. This Saturday marks 365 days since the theme parks reopened last April, a full year since cast members lined Main Street, U.S.A. and welcomed back the first visitors to Disneyland. With the anniversary near, Potrock spoke to Anaheim political and business leaders at his first State of the Resort presentation Wednesday night.

The event is typically time for Disney leaders to tout the contributions of the Resort to the local economy, discuss charitable works and community engagement, and give a look ahead to the company's future plans—and Potrock's delivered on all of the above. There wasn't anything particularly groundbreaking in the announcements made—except, of course, for a look at the actual groundbreaking for Mickey and Minnie's Runaway Railway, which occurred just this week—but it seems that Potrock is eager to put 412 and 365 behind and look ahead to several big projects throughout the Disneyland Resort.

At long last, guests of the three Disneyland Resort Hotels will once again be able to take advantage of early entry to the theme parks starting later this summer. This guest-favorite perk hasn't been available since the theme parks reopened, and some feared it might not return at all. Disney provided no dates or details on the offering.

Rumors had been flying about a Pixar-themed makeover of the Paradise Pier Hotel ever since concept art was inadvertently put on display at a Disneyland Paris hotel, and yesterday, Potrock announced that the project is indeed nearing its start. The hotel will remain open during the transformation, with work taking place one section at a time. 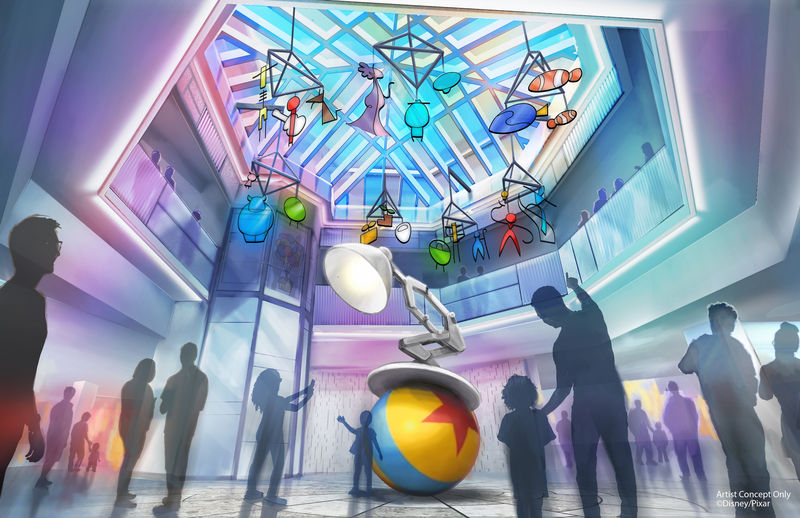 The Pixar ball will be a focal point of the lobby of the Paradise Pier Hotel. Artist rendering courtesy Disney. 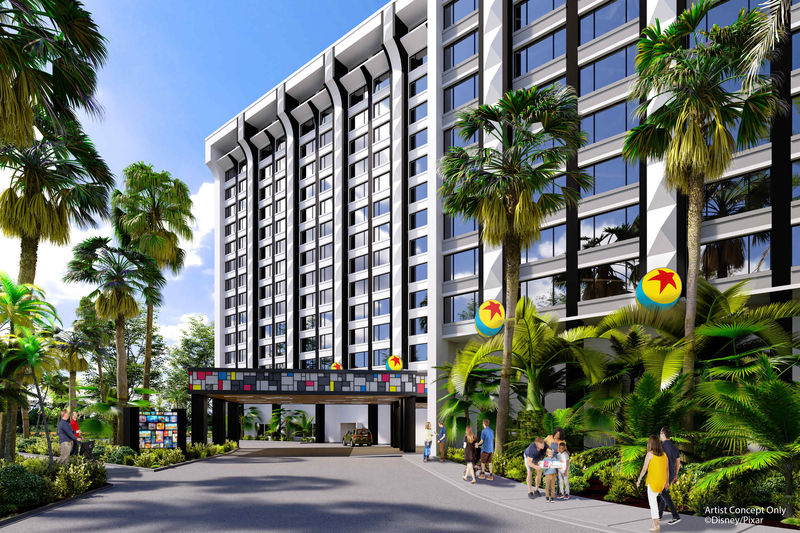 Another perk returning later this summer is the ability for hotel guests to have in-park purchases delivered back to their hotel rooms.

As part of Walt Disney World's 50th anniversary celebration last year, Disney unveiled a partnership with Amazon for the new "Hey, Disney" service coming to the Amazon Echo smart device. Disney has now confirmed that the same service will be added to the Disneyland Resort Hotels later this year, and hotel guest rooms will be equipped with the Amazon Echo device. 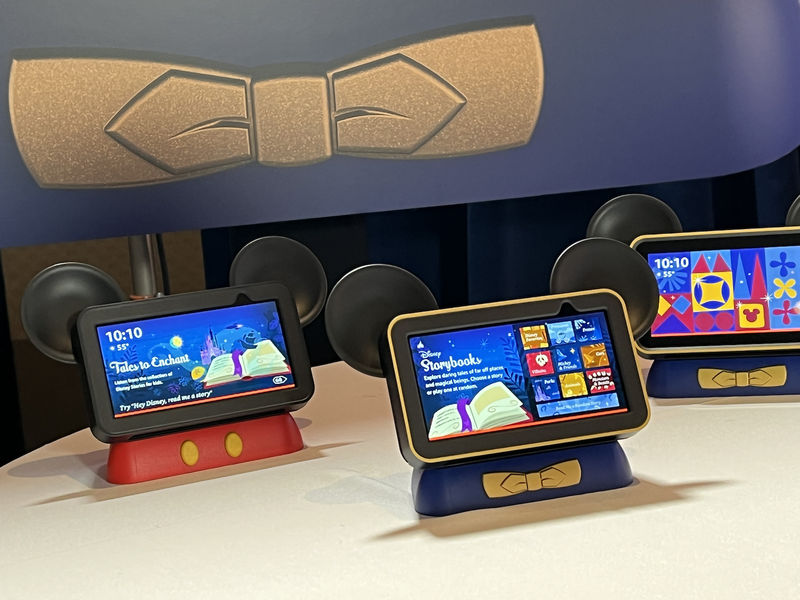 The in-room "Hey, Disney" service will feature a new Disney character created just for the service and, as it is built on the Alexa service, will be able to answer some questions relevant to a guest's stay like, "When are the fireworks tonight?" It will also include entertainment and storytelling features. A version of the "Hey, Disney" service will also be available for purchase as an at-home upgrade to existing Echo devices. As is the case at Walt Disney World, we expect the device will be set to inactive by default, and will require guests to opt in to use the complimentary services in their room.

With Mickey & Minnie’s Runaway Railway slated to open at Disneyland in early 2023, Mickey's Toontown closed in March so that work could begin on the transformation of the entire land. Disney shared a photo from this week's groundbreaking for the new attraction, though no further details were shared. 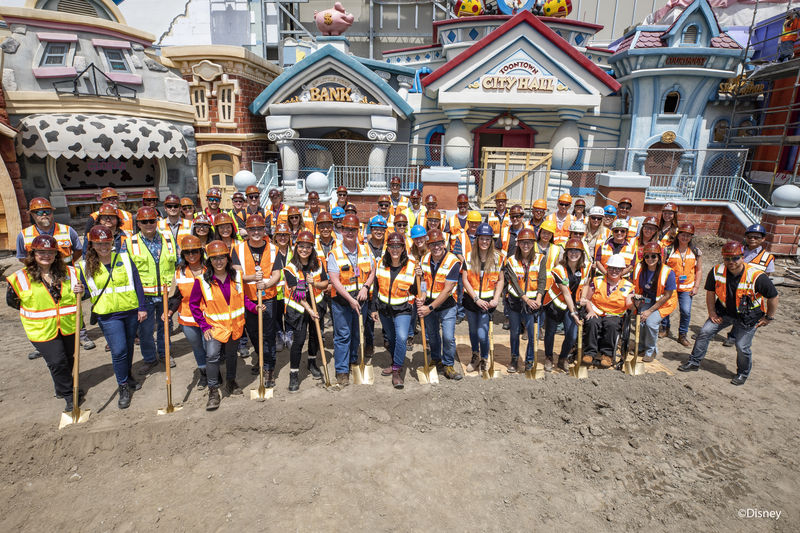 Potrock also spoke about the return of nighttime spectaculars to the Disneyland Resort last week, and the pending return of Fantasmic in May, but no details about the "Tale of the Lion King" production, which is slated to open in early summer at Disneyland.

We were also hoping to hear more about the retheming of Tarzan's Tree house that Disney confirmed last week, or an update about the Submarine Voyage in Tomorrowland, which did not reopen with the parks last year.

As for Disney California Adventure, there was no news about a possible addition to Avengers Campus, or any other real updates to that park.

A re-imagining of Downtown Disney has been going on since well before the pandemic, initially spurred by Disney's plan to build a fourth hotel on the west side of the complex. After Disney formally canceled that project in 2018, the company brought back previously displaced tenants Starbucks and Earl of Sandwich to reopen their stores, and attracted new tenants to the remaining vacant spots.

Then last November, Disney delivered the news that Starbucks and Earl of Sandwich would close once more, this time to make way for a new retail complex and multi-function space. The last month has seen the demolition of the former AMC Theater building, and Disney has shared some additional concept art of what will fill that space.

As part of what Potrock calls a significant investment in Downtown Disney, the company announced a number of additions and changes to provide a more diverse dining experience in the shopping and dining complex. A branch of Din Tai Fung will open in Downtown Disney, and we can only imagine the lines of customers eager to try the restaurant's famous Xiao Long Bao. 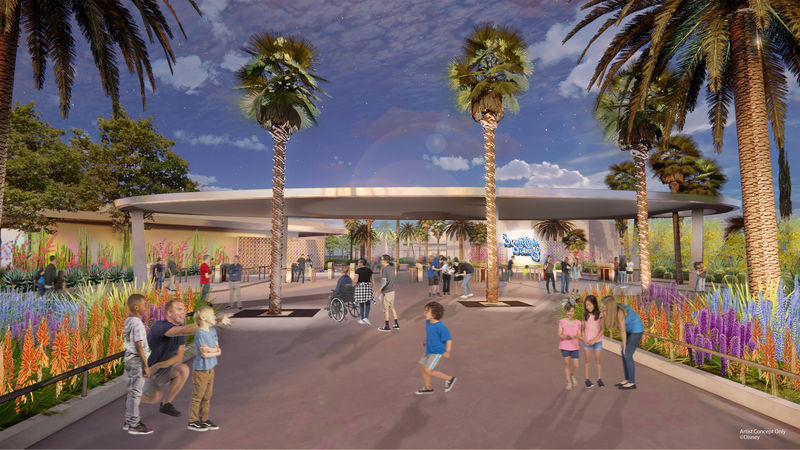 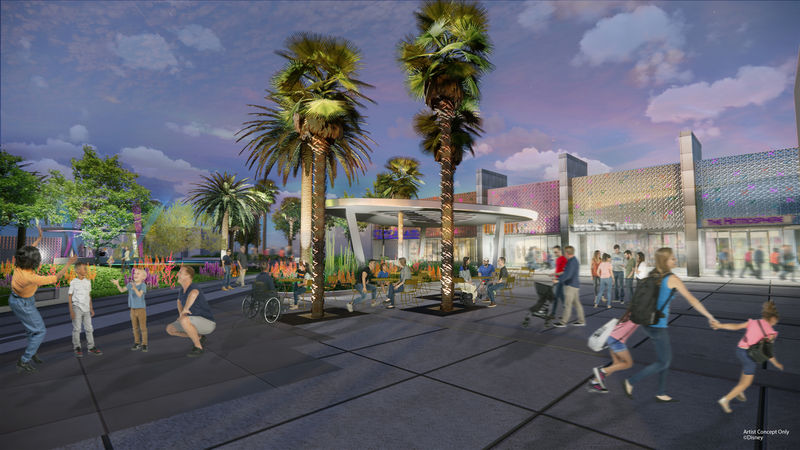 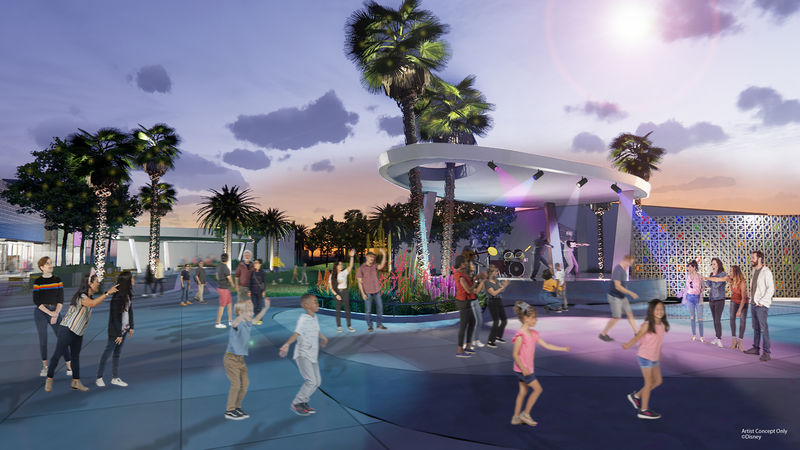 Downtown Disney will have a performance stage and a grass lawn for gatherings and special events. Artist rendering courtesy Disney.

Ralph Brennan's Jazz Kitchen will undergo an extensive renovation inside and out, and reopen with a new menu. Later this year the popular Earl of Sandwich will reopen for a limited time as a walk-up sandwich shop near the former ESPN Zone building. 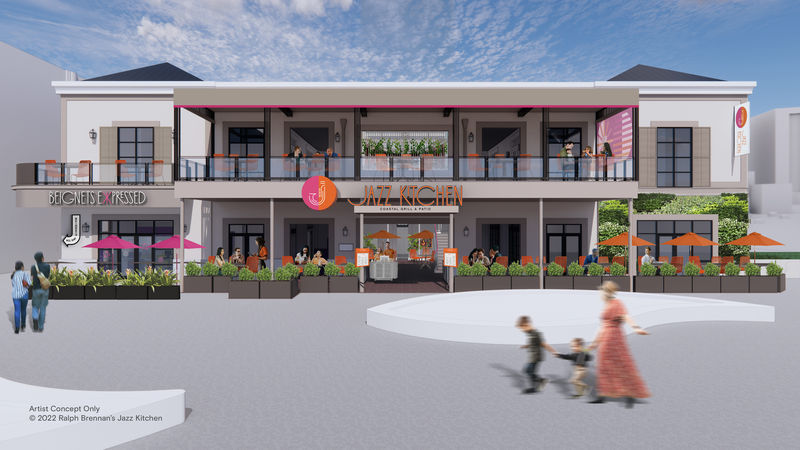 Ralph Brennan’s Jazz Kitchen will be renovated inside and out. Artist rendering courtesy Disney.

The Patina Group is making a big change to the Catal and Uva Bar locations, and will reopen them as upscale Mexican eateries under the direction of Michelin-starred Chef Carlos Gaytan. The chef is known for his appearance on the reality cooking show Top Chef, and was the first Mexican-born chef to earn a Michelin star.

Disney did not provide a timeline for any of the Downtown Disney projects. 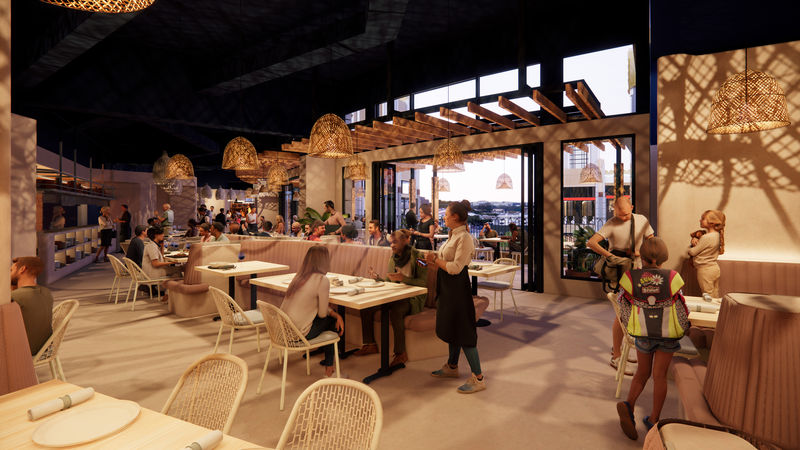 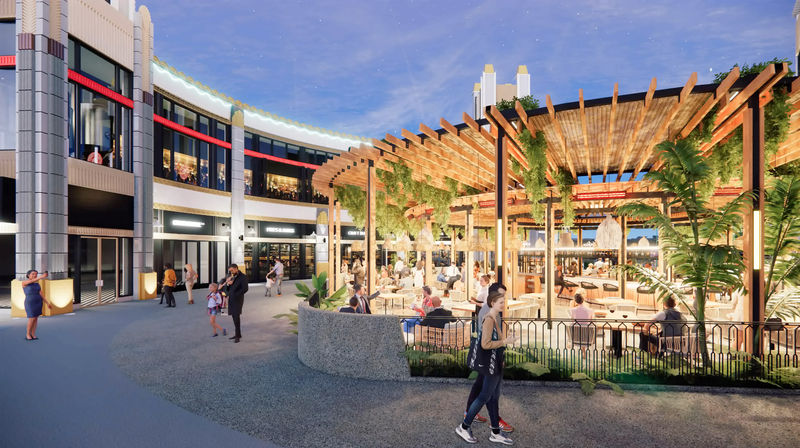 The Uva Bar in Downtown Disney will reopen as Centrico, with a focus on small bites. Artist rendering courtesy Disney.

Four hundred twelve may weigh heavily on Potrock because of the impact the prolonged closure had on Disneyland Resort cast members, most of whom he never got a chance to meet before the pandemic. From a skeleton crew of about 2,000 workers who staffed the resort during the closure, the Disneyland Resort is back up to having nearly 30,000 employees, but Potrock admits they're still looking to hire more.

In an effort to become the employer of choice in Orange County, the Disneyland Resort is stepping up its investment in the Disney Aspire program, which offers upfront tuition coverage and book reimbursement at a network of schools. All of the programs are online only, but that's about to change. Disney is working with both California State University, Fullerton and Fullerton College to add in-person options for Disney Aspire participants.

Disney has previously committed $4 million to workforce development and mentorship programs in Anaheim and surrounding communities, with over 10,000 residents participating in the programs. The company has pledged another $1 million to the programs.