As I explained in last week's Walt Disney World Resort Update, we really don't expect to see any major news from Disney Parks around here until the run of the sold-out, three-day, 2022 D23 Expo scheduled to take place in Anaheim, California on September 9, 10, and 11, 2022. In past editions of the D23 Expo, Disney made its big Parks and Experiences announcements on the big stage there, and we expect it to do so again this time.

Regular readers probably remember that there a a number of projects that had been announced at past editions of the Expo that either were delayed by the global COVID pandemic, put on official hold, or just quietly faded away with nary a word from the Disney Parks team (we're looking at you theater venue just off Main Street U.S.A. at Magic Kingdom). The Parks presentation was live-streamed by Disney during the 2019 Expo and, simultaneous with each of the big announcements, Disney Parks Blog released articles, concept art, and photos to accompany them—we expect pretty much the same for this expo.

Recapping from last week: we don't know if Disney is ready to announce things like opening dates for TRON LightCycle Run, Journey of Water Inspired by Moana (though imagineer Zach Riddley posted some new art representing the attraction's graphics style and a few more details this past week), Play! Pavilion, or additional phases of EPCOT's transformation, or any other reimaginings (except Tiana's Bayou Adventure expected in late 2024) or expansion plans.

We know that the focus of the D23 Expo (on some overall level) will be the 100th anniversary of The Walt Disney Company coming up in 2023, and we'll probably hear about how Walt Disney World Resort will transition from The World's Most Magical Celebration (of the 50th anniversary of the Resort) when it ends next spring into whatever celebratory name the centennial will have. As I asked last week: will Disney announce new capital-intensive projects for the Florida resort in the face of stepped-up competition from development of Epic Universe just up the Interstate at Universal Orlando Resort? Stay tuned.

Magic Kingdom's Halloween transformation is already well-documented on social media. Why so early, some ask? Well, Mickey's Not-So-Scary Halloween Party, the separate-admission, after hours party, returns on select nights from this Friday, August 12 through October 31. Disney Parks invited MousePlanet to attend a media night at Not-So-Scary coming up next week, so we'll have our own social media coverage and more in a future Update. For now, Disney Parks Blog has already shared its Foodie Guide for the 2022 edition of the party.

Your taste buds will be running amuck, amuck, amuck once you see the mouthwatering concoctions for Mickey’s Not-So-Scary Halloween Party! 🎃 Take a peek at our Foodie Guide with all the treats: https://t.co/fmoe3I3zGt pic.twitter.com/8cm0juZ5Jh

…Planet Hollywood invited MousePlanet to a hosted dinner at its Disney Springs restaurant to try its new prime rib of beef dinner, which is now available after 4 p.m. daily. We also sampled a few other items, from the High Roller Sampler, and the crazy-large (but fun) shareable ice cream dessert.

…Speaking of Disney Springs dining, for ticket holders of Drawn to Life by Cirque du Soleil and Disney, you can now enjoy the new "Animated Evening" offering, a prix fixe dinner at one of 13 Disney Springs restaurants before or after the show. The participating restaurants have a special menu just for this offer. Once you have purchased your show tickets, you can book the dining reservations if you ask for the "Animated Evening" menu when calling (407) 587-5981. The offer can be combined with the ticket specials for Florida residents, Disney Vacation Club, and Annual Passholders. Full details on this page of the DisneySprings website.

The following restaurants have a $45/person (plus tax and gratuity) prix fixe menu:

The Edison, Paddlefish, and Wolfgang Puck Bar & Grill each have a $65/person (plus tax and gratuity) prix fixe menu.

Experience a feast for all your senses with an Animated Evening at @DisneySprings! Cirque du Soleil ticket holders can enjoy a delicious prix fixe dinner and a captivating performance of Drawn to Life presented by Cirque du Soleil and Disney.🎨 Learn more: https://t.co/1QS9uVR7rC pic.twitter.com/YMf1yHnUEl

…REMINDER: At Disney Springs, Enzo’s Hideaway Tunnel Bar is relaunching its monthly "Smuggler Series" this month, "where lovers of fine beer, wine and cocktails gather together to eat, drink and expand their knowledge of various spirits." The first event will take place on National Rum Day, August 16, and guests will indulge in expertly paired dishes created by Executive Chef Ben Dodaro with cocktails featuring Flor de Caña Rum. Tickets are $115/person (plus tax and gratuities). The event is scheduled from 4 to 6 p.m. Tickets are available on Tock.

Every month, lovers of fine beer, wine, and cocktails gather together in the tunnels of Enzo’s Hideaway to eat, drink, and expand their knowledge. Join us for our August Smuggler’s Series showcasing Flor de Caña Rum. Reserve your tickets today: https://t.co/h0BzxIswgV pic.twitter.com/XB0Qxx934p

…And, after publication of the Update last week (but added later in the day), Disney Vacation Club added an additional Moonlight Magic event night in September at Disney's Typhoon Lagoon. Registration has closed for the August 9, 15, and 23 events, but the new added event on September 8 will have registration for eligible members with hotel reservations on August 11 at 11 a.m. Eastern, and for all other eligible members on August 16 on 11 a.m. Eastern. Visit the Disney Vacation Club website for more information.

…Finally, because Give Kids the World Village, the not-for-profit resort that provides critically ill children and their families week long, cost-free vacations in Central Florida, has resumed full operations, the organization announced that its pandemic-time creation of the "Night of a Million Lights" fundraiser will not return this winter. 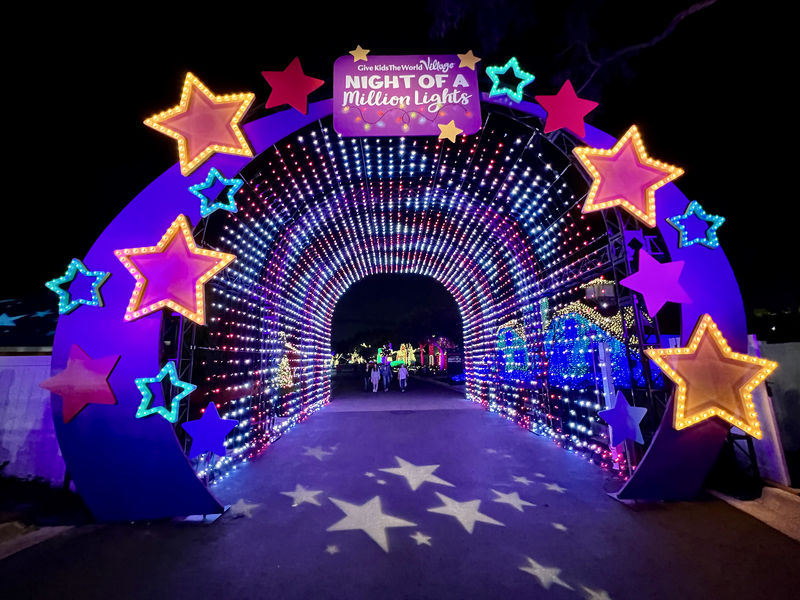 Night of a Million Lights featured many lights donated by Walt Disney World Resort, and decorated around the resort by many of the attractions, entertainment companies, and other Central Florida businesses. File photo by Alan S. Dalinka.

Face coverings remain optional across all of Walt Disney World Resort. Remember to check this page of DisneyWorld.com for the latest requirements.

As for visiting the Walt Disney World theme parks, Disney Park Pass reservations are required for admission in addition to a valid ticket. If your tickets have the Park Hopper option, Park Hopping only becomes available after 2 p.m. daily, and only after you have first visited the park for which you have made a reservation that day. There have been instances where Magic Kingdom has reached capacity and paused admission of Park Hoppers, and Disney reserves the right to do so at all the parks.

Sales of new Walt Disney World Annual Passes continue to be paused in all categories except the Florida Resident Pixie Dust Pass. Disney reserved the right to pause those sales when it reintroduced its new Annual Passes. Current Passholders may continue to purchase renewals in all tiers regardless of the pause in new sales. We have seen nothing further about when Disney plans to resume sales of new passes following their apparent brief surfacing earlier this month that we reported on last week.

The U.S. Centers for Disease Control and Prevention continues to monitor the cases of the rare monkeypox virus in Florida and elsewhere. We will include more information here in future Updates should it relate to visiting Walt Disney World Resort.

Finally, don't forget it's tropical storm season. It also rains a lot at this time of year at Walt Disney World Resort, often with dangerous cloud-to-ground lightning strikes. It gets hot and humid. Please be prepared!

Disney+ subscribers that link their Disney+ account to their My Disney Experience account can also save up to 25% on select Disney Resort hotels for select night stays through September 30, 2022.

Walt Disney World Annual Passholders and Florida residents can save up to 30% off regular rates on their stays at the Walt Disney World Swan and Dolphin. Guests can visit swandolphin.com/offers/ for more information or to book.

Our travel partner Get Away Today is available to help you book rooms and packages. When you book a Walt Disney World Resort Package with Get Away Today with a minimum 3-night stay at a Disney Resort Hotel plus tickets, you receive its complimentary concierge service which includes:

You can get a free Walt Disney World Resort vacation quote by calling 855-GET-AWAY (and tell them MousePlanet sent you) or, you can find sample prices and submit a free quote request here.

Looking to go beyond Walt Disney World Resort when visiting Central Florida? Check out Get Away Today's Universal Orlando Resort ticket offers too.