The Disney parks are in a constant state of development and rennovation. The parks, hotels, and the rest are constantly changing over time, with the seasons, with different festivals, and so on.  Each of these iterations involves "out with the old and in with the new." Props, furniture, signs and other doodads are replaced and the old ones are sent out to the trash heap… or are they?

Do you ever wonder where at some of that stuff goes? Wonder no more!

Years ago, there was an outfit called Mouse Surplus. They had a huge warehouse outside of Orlando filled with items they procured from Disney that were discarded from the theme parks. There was a wide range of items in all price ranges. To give you an idea, I bought an old button from the Who Wants to be a Millionaire attraction at Hollywood Studios and there was also a full-sized monorail car overhead (I didn't buy that!).

Mouse Surplus went the way of Mr. Toad's Wild Ride in Florida somewhere along the way and disappeared, but if you're willing to leave WDW's magical grounds for a few hours, there's a worthwhile place down the road where you can still pick up some pieces of magic.

Located in the city of Lakeland, down Interstate 4 from Walt Disney World, the Lakeland Antique Mall has all kinds of collectibles from many categories—but to this Disney collector, the main attractions are the bits of Disney history, ranging from theme park castaways and antique toys to Disney-dedicated crafts made by talented artists.

There's a ton to look at here, but I'm going to highlight a few items that really grabbed my attention. 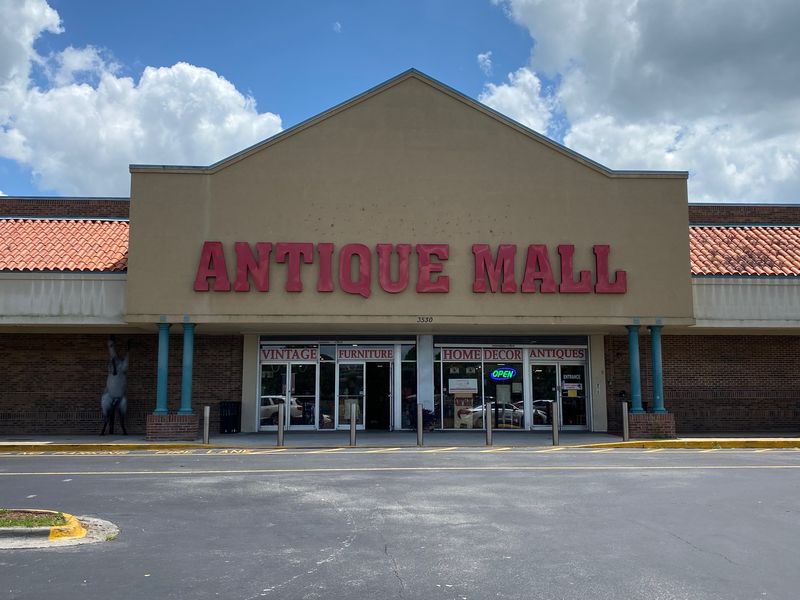 This unassuming storefront hides treasures within. Photo by Gregg Jacobs.

You pull into the parking lot and find a fairly unassuming building. But as soon as you walk in, you see that it's something special. As far as Disney, the first thing you see when you walk in is a line of tubs of Disney pins. 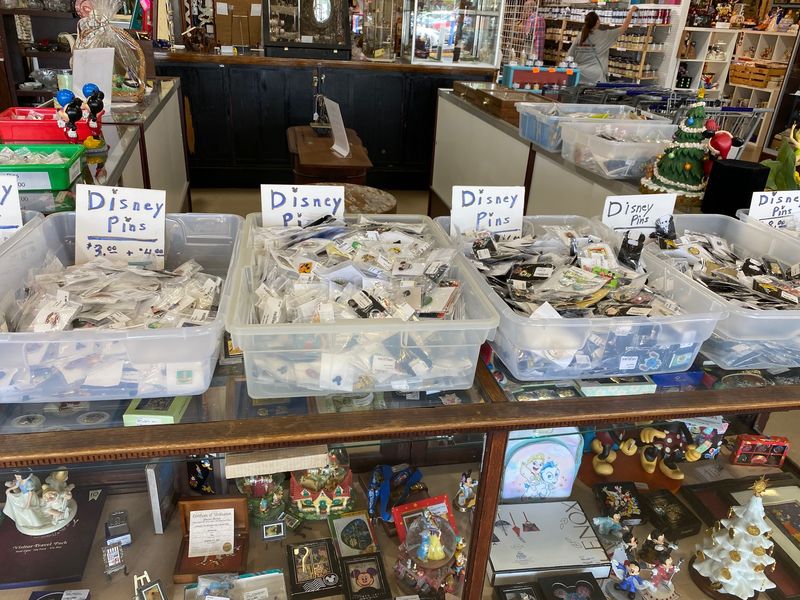 You walk in and immediately see huge containers filled with pins. Photo by Gregg Jacobs.

These are old and new, are related to theme parks and Disney films and run anywhere from a $2 to $100. You just have to roll up your sleeves and take your time to find exactly what you want.

Again, there are tons of different items here, but the main attractions for me and many others are the theme park artifacts for sale. Vault Collectibles is the name of the company that buys items from Disney that were actually used at the Walt Disney World Resort (and in this case Universal Resort Orlando). Their section is located all the way at the back of the mall and is well worth the visit. 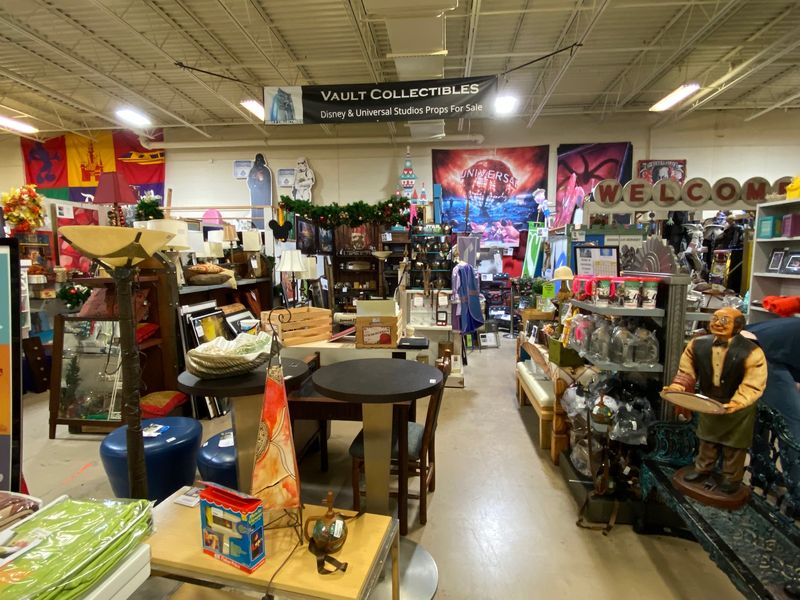 Vault Collectibles has a large section in the back of the mall. Photo by Gregg Jacobs.

These items range from costumes used by cast members to large pieces of furniture that once sat in Disney hotel rooms. One item from the latter category is a round faux wood table with Mickey silhouettes around the edges and chrome legs. These tables (they had many of them in inventory) once decorated the rooms of Disney's All Star Resorts before the latest remodel (and I stayed there and sat at these, so I know they're real). 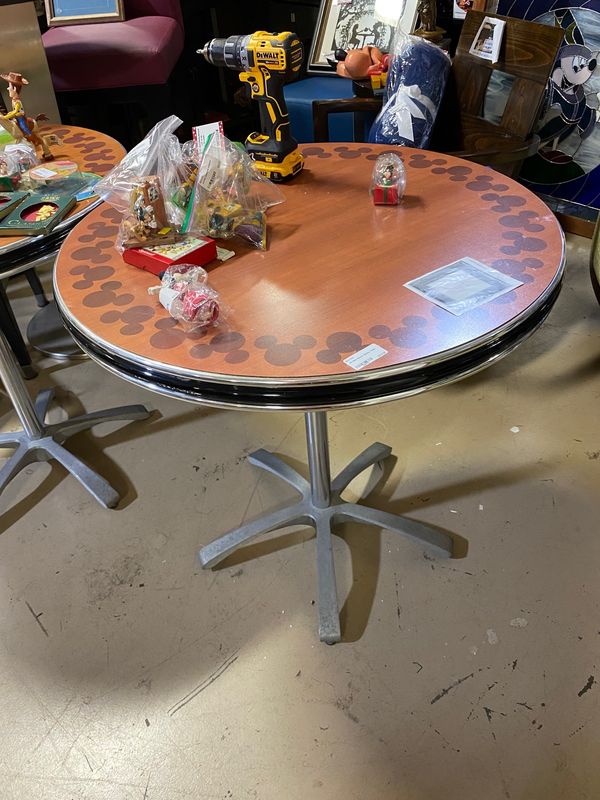 They have a table that actually sat in a room at Disney's All Star Resort. Photo by Gregg Jacobs.

The tables are definitely used, but that adds to their charm. One of these can be in your house for $75.

Next up is another historical WDW park artifact. The 50th anniversary celebration is going on now, but do you remember the Cinderella's Castle birthday cake from 1996 for the resort's 25th? 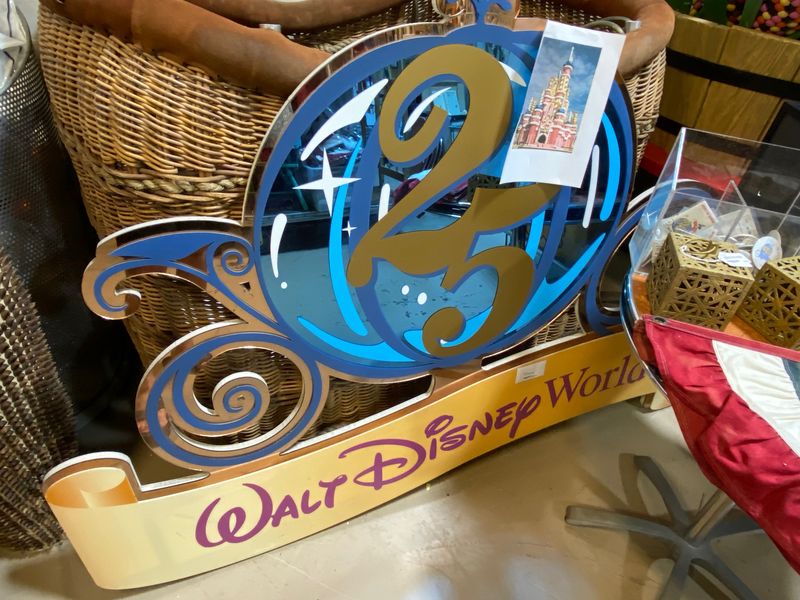 There was a lampost sign from Walt Disney World's 25th Anniversary Celebration. Photo by Gregg Jacobs.

These signs depict Cinderella's coach and sat on lamposts around the Magic Kingdom hub during the anniversary celebration. They're a wooden material and go for $100.

Getting back to the resorts, for anyone who stayed at Pop Century before the latest rennovation, you may remember a headboard over the bed that had Art Deco-ish versions of classic Disney characters. 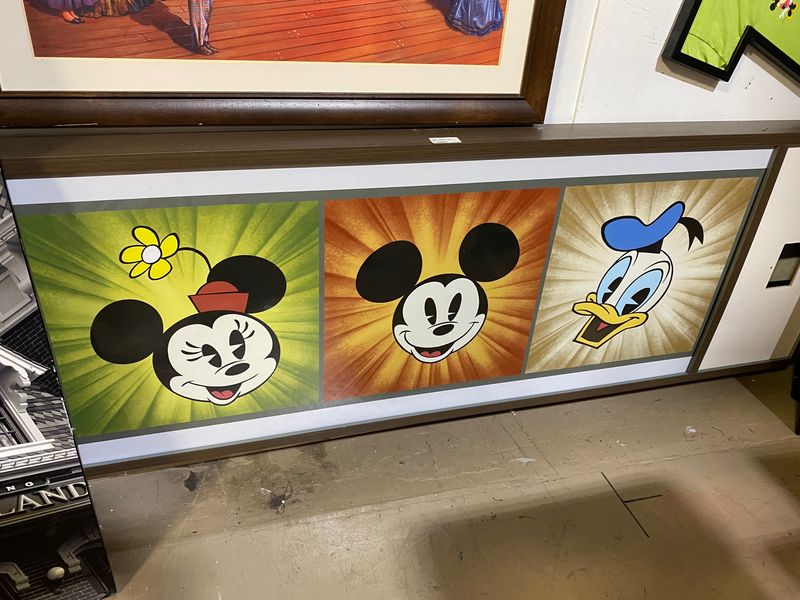 You can own this headboard from Disney's Pop Century Resort. Photo by Gregg Jacobs.

A couple of these headboards were available for sale at Lakeland.

Not all park items for sale are really large and expensive. For example, there was a display of Disney holiday ornaments that decorated the trees around Disney property during the last holiday season. 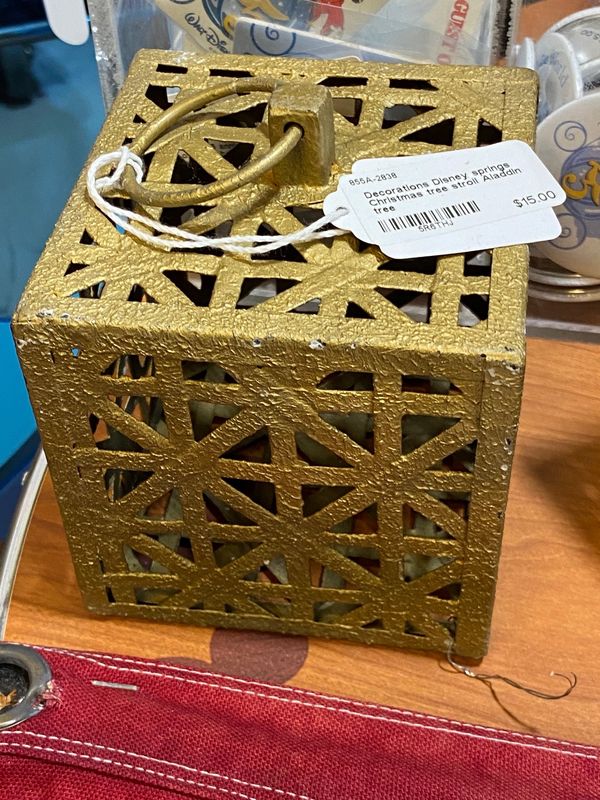 There were affordable items there too, such as holiday ornaments that hung on Walt Disney World trees. Photo by Gregg Jacobs.

Depicted in this picture is a gold lantern that, according to the tag, decorated the Aladdin tree at the Disney Springs Christmas tree stroll. It runs only $15. I actually picked up a few ornaments for myself and family. They were small birdcages that hung on the Grand Floridian tree.

Moving on to another category of item, there are talented artists/Disney fans that use their talent to create some great items, 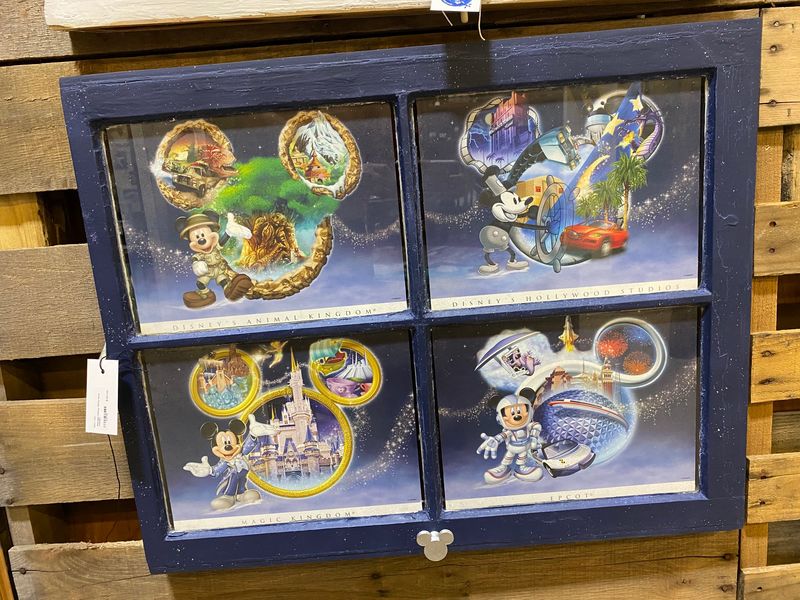 For example, one vendor takes items such as old window frames and along with Disney photographs, maps, brochures, crates wonderful works of art. The cool Four Park window in the picture above is one of several that were available and ran for approximately $150.

There's lots of great stuff here, but my favorite item is sadly out of my price range. Towards the front of the mall, there's a booth that specializes in Winnie the Pooh items. One that struck my eye was an original piece of artwork by Disney legend Mary Blair, who worked directly with Walt Disney and did the designs for "it's a small world," amongst many other projects. 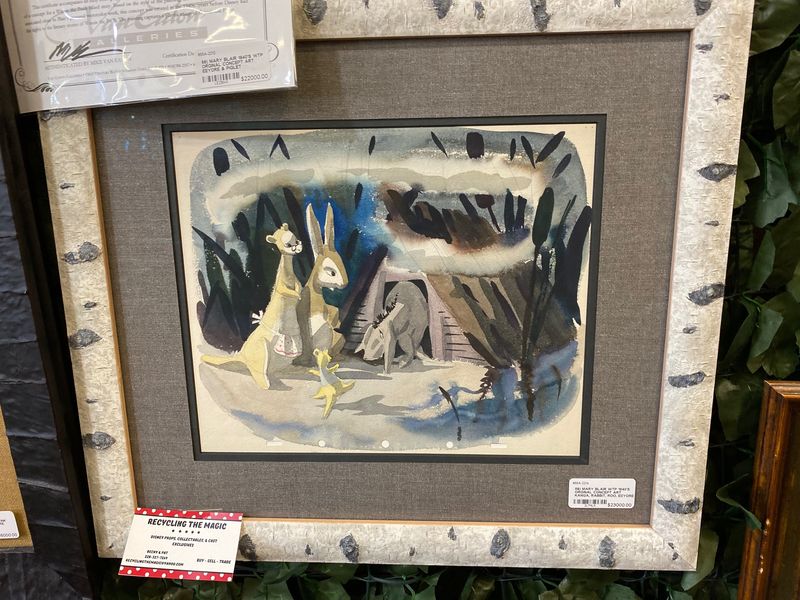 I got to see an original work of art by Disney legend Mary Blair. Photo by Gregg Jacobs.

It's a beautiful image of Eeyore, Kanga, Roo and Rabbit and is identified as concept art.  Would love to add this to my animation art collection, but the $22,000 price tag is a bit rich for my blood. That said, it was great to see a piece of Disney history in person that she actually created.

Even if you don't want to buy anything, there's a lot of this kind of history in this huge place. The Mary Blair painting alone is worth a look, not to mention all the theme park artifacts.  There's also a lot of very interesting non-Disney related items. There are dozens of vendors with stalls there, and you're likely to find something interesting no matter what your areas of interest.

You can see the mall online at https://antiqueslakeland.com. If you're ready to go in person, it's an approximately 35-minute drive from Walt Disney World property, a quick trip down I4.

That's all for today.  As a heads up for next time, I'm visiting Disneyland Paris next month, so in the next few articles, I'll take a look at that massive resport and explore it from a bunch of angles—of course merch, but also attractions, food, etc., so hope you'll join me.

Thanks for reading and see you real soon!