10 Questions Before the Premiere of Star Wars: Andor

Ever since the Original Trilogy of Star Wars, we've wondered how this all started. The Prequel Trilogy took us back in time for us to witness how lies, betrayal, and violence overtook a once-peaceful Republic. There are some gaps from that time to the moment Luke Skywalker flies his X-Wing against the Death Star. Andor, the new original series premiering next Wednesday September 21 on Disney+, wants us to witness how grit, determination, and... well, violence, attempts to overthrow the evil Empire.

If you're wondering what this new series is about, let's go through my list of 10 key points or questions. 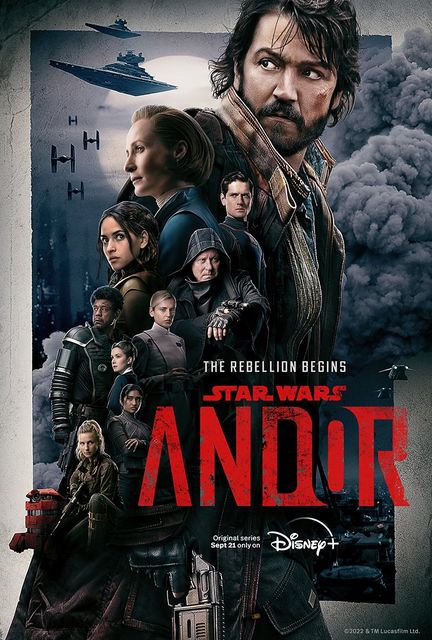 1. What will Andor actually be about?

Cassian Andor is "an unsuspecting thief" called to a greater purpose: to join the Rebellion against the Empire.

This video is a nice quick glimpse into the setting of Andor and how complicated rebellion, alliances, and war can get.

Cassian Andor represents the spirit of the rebellion where it might be a far-off conflict, but one that eventually hits home. It looks like it will continue some of the ideas of Rogue One regarding the costs of victory and how far one must go to achieve even the smallest of victories. Like its source material, this story seems to focus on the boots-on-the-ground struggles of fighters in difficult battles.

2. When does the story of Andor take place?

Five years before Rogue One. The following video is a great introduction to Andor's place in the Star Wars timeline:

The timeline placement is always an important note when viewing a Star Wars show. Five years before Rogue One also means five years before A New Hope. The trailers above hint that we may do some time-jumping and see into Cassian's past. Meanwhile, there will be so many more hints and references to future events that we are already aware of. It is difficult to write with those future events in mind because there must be tension on screen and there shouldn't be a reliance on irony. I have high hopes for the balance of those issues in the series.

K2SO and Andor in ROGUE ONE. © Lucasfilm/Disney.

K2SO is not in the trailers. Not on the poster, no listed as a character, and Alan Tudyk isn't listed in the cast. But nothing like those sorts of things have stopped Star Wars fans from speculating that a character will still appear. K2SO was a fantastic character that brought levity to an otherwise very serious film. Co-pilots in Star Wars, like Han and Chewie, are a popular trope and we assume that they've just always been together. They're not together here... yet. I belive a surprise is in store where we will indeed get to witness Andor and K2's first meeting.

4. What is Mon Mothma's story?

When we first met Mon Mothma in Return of the Jedi, she was leader of the Alliance. From that moment her character was a bit of a mystery. How did she come to lead the Rebels? How did she keep her allegiances a secret while working as a representative in the Imperial Senate? We saw her powerful leadership on display in Rogue One but her story is incomplete. With her featuring heavily in the trailers, I think we'll get answers in what could be an amazing performance that is the opposite of the Emperor when he kept his intentions secret up until Revenge of the Sith.

5. How did Saw Gerrera become extreme?

Speaking of Mon Mothma, another character returning from Rogue One is Saw Gerrera. We didn't get to see much of him but some of his story has been shown in the past. His backstory from The Clone Wars invovles military conflicts, sovereign royalty, and harsh realities of winning freedom. Mothma describes him as an extremist who had been causing problems for the Alliance at a time when they were trying to win supporters. Here in Andor, perhaps we will see what his torturous past may have done to him and causes him to go to great lenghts in the fight against tyrrany.

Even though Andor takes place several years after Revenge of the Sith and the rise of the Empire was swift, the effects of that change spread like ripples throughout the galaxy. One thing Rogue One did was not have a focus on Jedi or the Force, and it looks like this series may double-down on that conceit which lends gravitas to Luke's actions much later. I'm hoping for some reflection, somewhere, about the aftermath of Order 66, the command given by Palpatine to make all Jedi the enemies of the Empire and to be killed on sight. What is this galaxy like now that they're told that the Jedi are enemies, when before the were protectors.

7. What about the Senate and the Emperor?

Palpatine loves being evil - will he appear in ANDOR? © Lucasfilm/Disney.

Speaking of the Emperor... I hope he shows his ugly face in Andor. He represents everything evil in the galaxy. He is the reason the Empire exists, the reason Andor chose his path. The trailer shows glimpses of the Senate chamber and it would seem a likely proposition that old Palpy graces the floor with some new evil pronouncement to cause torment to our heroes.

The basis of the show is that of Andor and others trying to find weaknesses in the Empire in order to bring it down. The trailers out now show that among Cassian's many skills is espionage. At some point it looks like he will infiltrate the Imperial ranks and find clues for the Rebels. This is the kind of stuff I believe that fans want to see—realistic war drama. He mentions in the trailer that the Rebels include "spies, saboteurs, assassins," which is actually a quote of his from Rogue One. The Rebellion wasn't built by Boy and Girl Scouts.

9. What is Andor not proud of?

Speaking of spies, saboteurs, and assassins, these seem like salty character types. Though they are working on the side of freedom-seekers, Cassian mentions in Rogue One that they've all done "terrible things" in the name of the Rebellion. I think it's an assured idea that our Rebels here will walk the line of morality in their conflicts. Just how bad will it get? How far will they go?

Who are the Bothan spies? What are they? They were first mentioned by Mon Mothma in Return of the Jedi when she lamented to the Alliance that many of them had died discovering the truth about the Emperor's plans. Their purpose, their origin, and their actions are still veiled in much mystery even after all these years. I believe it's time to reveal them. In Star Wars, when you mention something like this, without any other information to go by, we tend to think of them in extremes. For example, when Boba Fett appeared on screen in the Original Trilogy, we basically thought of him as the baddest bounty hunter in the galaxy. Why did we think that? We didn't have much to go on except that he was hired by Darth Vader and he captured Han Solo. If he can do that, he's got his act together, even though he was an antagonist at the time. With the Bothan Spies, and with even less to go on than we had with Boba Fett, we have thought of them as the best spies in the galaxy! I'd love for this series to show them at their best.

What are you looking forward to most about Andor?