As I've said, I'm currently doing a stint in Europe (Prague, Czech Republic). We're having a blast, but are sadly very far from the most magical place on Earth. Still, a guy's got to have his Disney fix, right?  A big positive of being in Europe is travel within the continent is relatively easy. There's no passport control within the EU, and there are trains and cheap flights. I need to take advantage of this, right?

You know that one of my first travel priorities had to be to visit Disneyland Paris, particularly because it's the resort's 30th anniversary year, and I'm happy to say that we finally made it!

We used Disney transportation to get from the airport to the resort. We went to Disney Village and shopped and ate. We visited both the Disneyland Park and Disney Studios Paris, riding all the rides, seeing all the shows and eating. I seem to keep mentioning eating. I hadn't been there in almost 20 years and loved almost every minute. I have tons to share - impressions of the attractions, how they compare to my home field of Walt Disney World and, of course, me being me, the merchandise.

With all these thoughts swirling in my mind, I'll present this in a series so that I can give you an idea of what we did, how we planned, and what we thought of the place.

My strategy for the trip was fairly simple. Although we've visited Paris a few times already, Mike and I wanted to get away for a long weekend that involved three days at Disneyland Paris, as well as three days in Paris, itself.

For our Disneyland Paris portion, we wanted to stay inside the magic, so I looked at the five resorts on property. We chose Disney's Sequoia Lodge. I'll be honest. We picked it mostly because it was the cheapest "deluxe" resort on the shores of Lake Disney.

There's a large lake near the parks, on the other side of Disney Village, where three large hotels sit: the Sequoia, Disney's Newport Bay Club, and Disney's Hotel New York. The theming at the Sequoia looked nice, and it was, at most, a 15-minute walk to the theme parks.

Similar to Walt Disney World, Disneyland Paris offer packages that include hotel stays and park tickets. And while they also have a theme park reservation system, it's not necessary if you're visiting through a hotel package. Your admission to both parks is guaranteed on the days surrounding your hotel nights, so you effectively get a guaranteed park hopper for the length of your stay.

We booked three nights: Thursday (our day of arrival), Friday and Saturday, planning to get up early Sunday morning to take a train from the convenient on Disney property train station to Paris.

Disneyland Paris offers a fixed-priced "Premier Access" ticket that enables you to go to the front of the line at a list of attractions, once each for the day you buy this pass. During my visit, the pass gave you access to 12 attractions altogether between Disneyland Park and Disney Studios.

I decided to buy Premier Access for Friday, our first day in the parks. It cost around $200 for both of us. The pass for Saturday would have been $300 for two. I didn't want to pay for both days, so went with the cheaper day, figuring we'd spend Friday running around trying to get on as many rides as possible.

If you plan in advance, getting around Europe is pretty easy and relatively inexpensive. We found flights that would get us until Paris's Orly Airport at 4:00 pm. From there, Disney offers Magical Shuttle, a bus service that takes you from the airport straight to your hotel. Although it's a little steep at $45 per person, it's very convenient. You also don't have to book for a certain time. The rep on the phone told me to just hop on the next available shuttle [Side note: Although I booked everything online, I had a few questions, so I called customer service. Unlike in the U.S., where wait times regularly tops two hours, I was only on hold about five minutes.]

We were ready to go, and here was our plan:

We dropped our two dogs off at the pet resport on the morning the trip, then headed to the airport. The flight was smooth and right on time, and we landed at 4:05. Our travel vouchers from Disney told us where to go to get the shuttle, so we headed to the bus stop to start the magic. 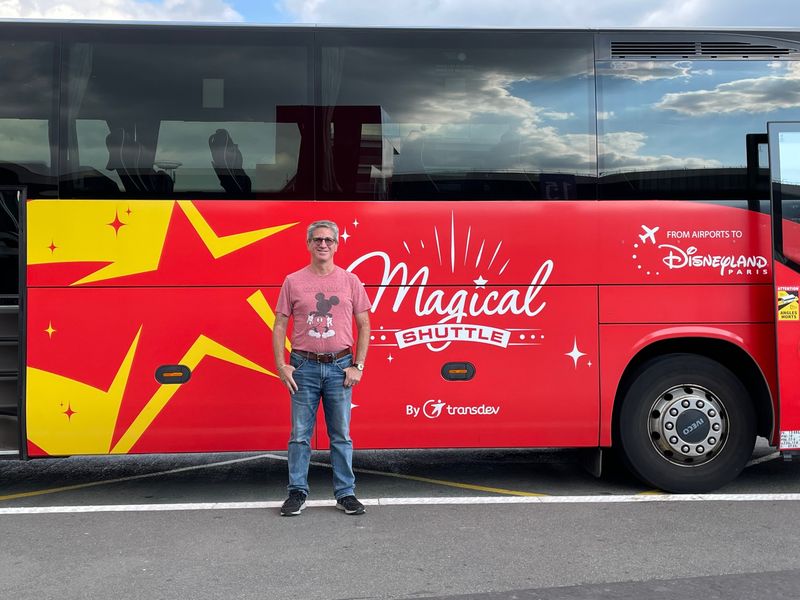 Gregg looks very happy to be on his way to see Mickey Mouse. Photo by Mike Ciani.

We got to the bus area around 4:15, and a bright red bus was waiting to sweep us off to the land of enchantment. My assumption was that the buses left every few minutes. But because they actually operated on an hourly schedule, we had to wait almost an hour for the next bus, scheduled to leave at 5:10 (I wanted to go now!). There were actually two bus stops at Orly. At a different terminal, the schedule said the bus left at 5:00. We had time to kill, so figured we'd walk over there and save 10 minutes.

We found the stop after a 20-minute walk, got some coffee, and waited. 5:00 came. No bus.  5:05… 5:10… no bus. I started to panic (there was Disney Village shopping time at stake after all}), and then at 5:20, a red bus pulled in—with the same driver as the other bus! I don't know why it said it was scheduled earlier at the other terminal, but we wound up on the same bus, and the driver asked us why we left (it turns out there are two bus stops, but the same bus stops at each one). Oh well.

We were finally off, and after some Paris rush-hour traffic, arrived at the resort a little after 6:00.

We checked in to Disney's Sequoia Lodge—essentially the Disneyland Paris version of Wilderness Lodge at Walt Disney World. It didn't have the soaring lobby, but was very nice. The rooms had a cabin-like feel, and the grounds were absolutely beautiful. As a deluxe hotel, Sequoia Lodge fronts Lake Disney, making it feel like you were in the wilderness. 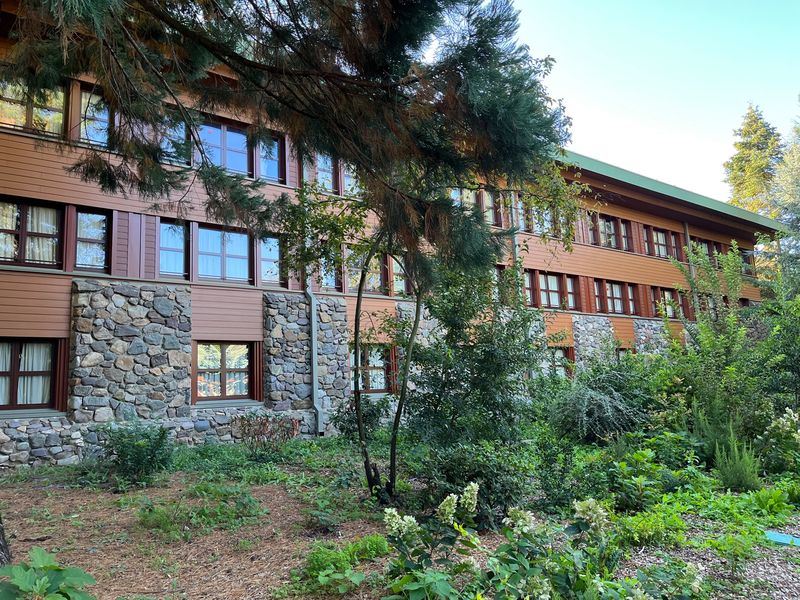 Disney's Seqouia Lodge looks like it's sitting in an American national park. Photo by Gregg Jacobs.

We went to our room, in the Monterey section of the hotel, dropped our bags, and took the short walk to Disney Village, Disneyland Paris's version of Walt Disney World's Disney Springs or Disneyland's Downtown Disney.

The Disneyland Paris hotels are all on one side, the deluxe resorts surround the lake, while the other two (which are also well-themed and beautiful) are a little further afield. Disney Village connects the hotel area to the parks, which are located on the other side. The overall resort has the more compact feel of the Disneyland Resort rather than the massive Walt Disney World, with the walk from our hotel to Disney Studios, the farthest point, only about 15 minutes away.

We made our way around Lake Disney and ran into Disney's Hotel New York, which is now subtitled, "The Art of Marvel". The whole hotel has been lightly Marvel themed, with large statues of Ironman and Captain Marvel out front, facing the lake. 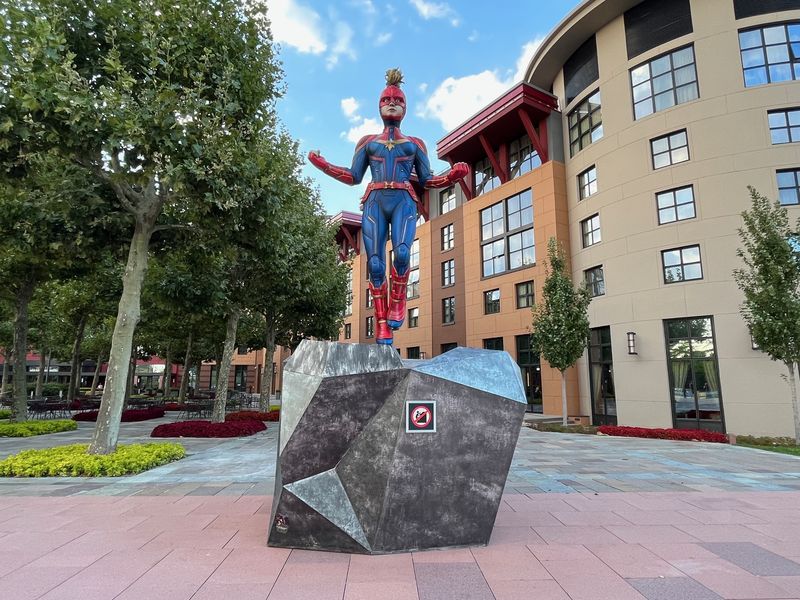 We them continued on around the lake and went through security to enter Disney Village. 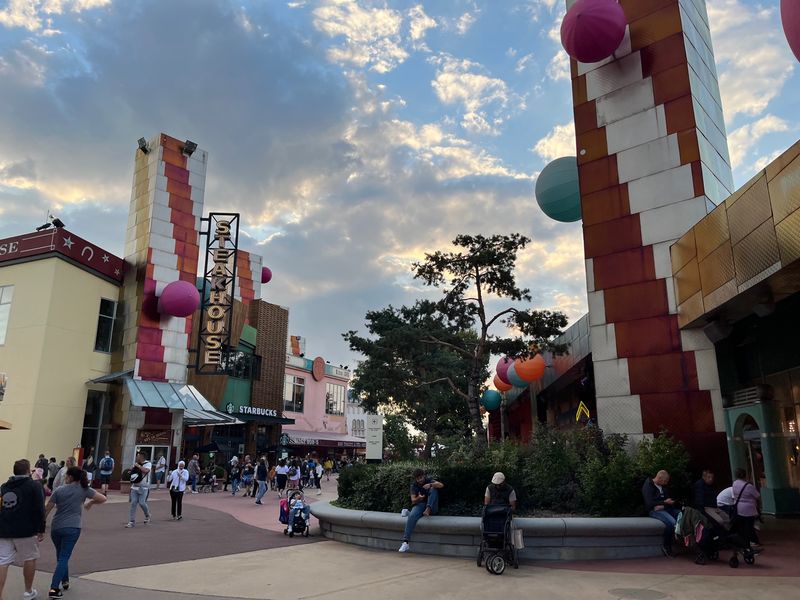 Disney Village is a relaively small, but has a nice collection of shops and restaurants. There were a bunch of Disney-themed stores, such as World of Disney, a real Disney Store (that was partially closed for construction when we arrived), a Disney Gallery, and Disney Fashion. There was a smattering of other shops and four or five large restaurants surrounded by some fast food (including Earl of Sandwich and McDonald's), and some food trucks. 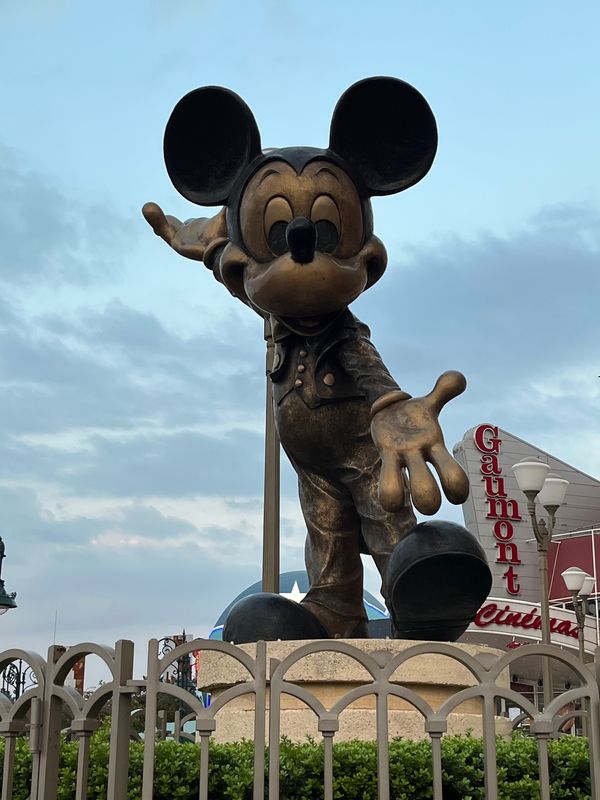 A large Mickey Mouse greets you at the Disney Village entrance. Photo by Gregg Jacobs.

We walked through the whole thing to scope it out, and to make sure we hit World of Disney first. 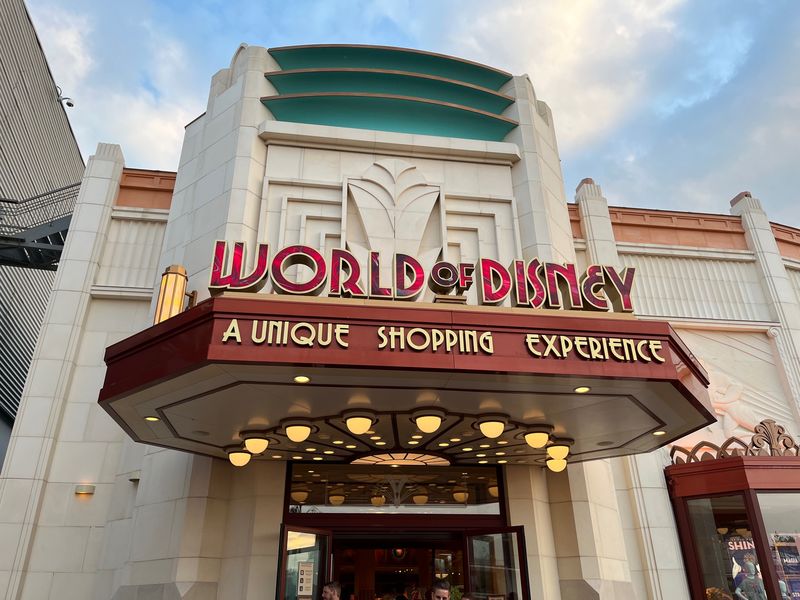 A large World of Disney Store sits at the entrance to Disneyland Paris's Disney Village. Photo by Gregg Jacobs.

World of Disney was pretty big and had a ton of merchandise related to Disneyland Paris. They had toys and plush, the usual mugs and keychains, and tons of clothing, especially themed for the 30th anniversary. The 30th merch was actually pretty creative. A lot of it was a throwback to the primary colors used in the original 1992 logo (similar to what they're doing in Orlando for WDW's 50th) and some of the styles are brand new.

After World of Disney, we continued on through the village, strolling in and out of the shops. My favorite was the Disney Gallery. They had a lot of limited edition sculptures and sketches, and some original artwork on the walls. There was also a scale model of Le Chateau de la Belle au Bois Dormant (Sleeping Beauty's Castle) from the park's original design team.

Another big shopping stop was the Disney Store. There aren't many of these left in the world (certainly none in Prague, although Mickey is alive and well there), so it was nice to see one here in Disney Village. They had what you'd expect to see at a Disney Store: a lot of toys and plush and not as much for the adults. Half of the store was actually behind a construction tarp (we saw that they had opened the area back up on our last day, so they must have been finishing up). 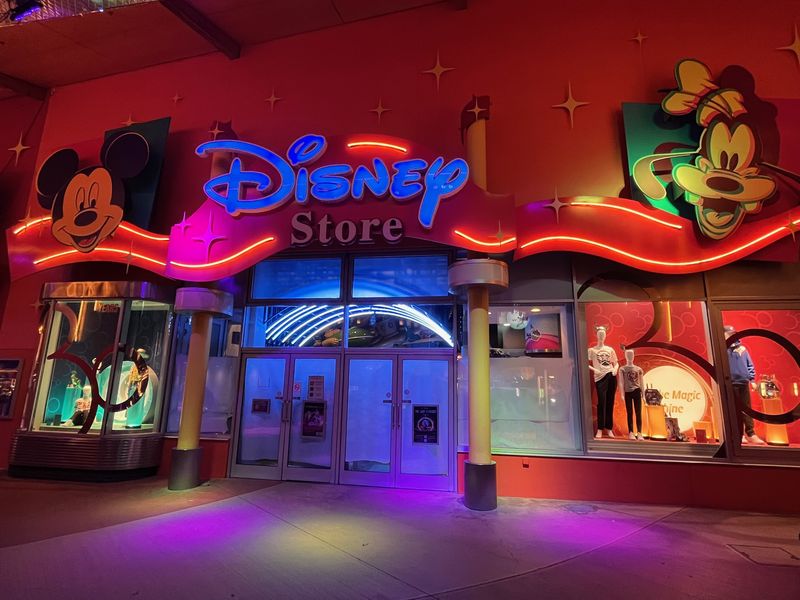 DLP has one of the few remaining Disney Stores. Photo by Gregg Jacobs.

After some quality window shopping time (I only bought a 30th anniversary baseball cap since I'd forgotten to bring one along on the trip), it was time for some food. I had originally made a reservation here at Billy's Bob's Country Western Saloon (a live music and barbeque buffet place), but cancelled it because I didn't want to lose any walking-around time. We scanned the eating options and found a couple of bars, including a huge sports bar that had American baseball up on the TV screens and fast food. A restaurant here called Cafe Mickey was closed for rennovation during our visit.

Being the Jersey boys that we are, we chose Annette's Diner in the end. The line wasn't too long, and we were seated in about 10 minutes. I realize we chose to eat American food for our first meal in Paris (I'm not proud)—we gorged ourselves on burgers, fries and cherry Coke. Our waiter was nice and attentive and on roller skates! 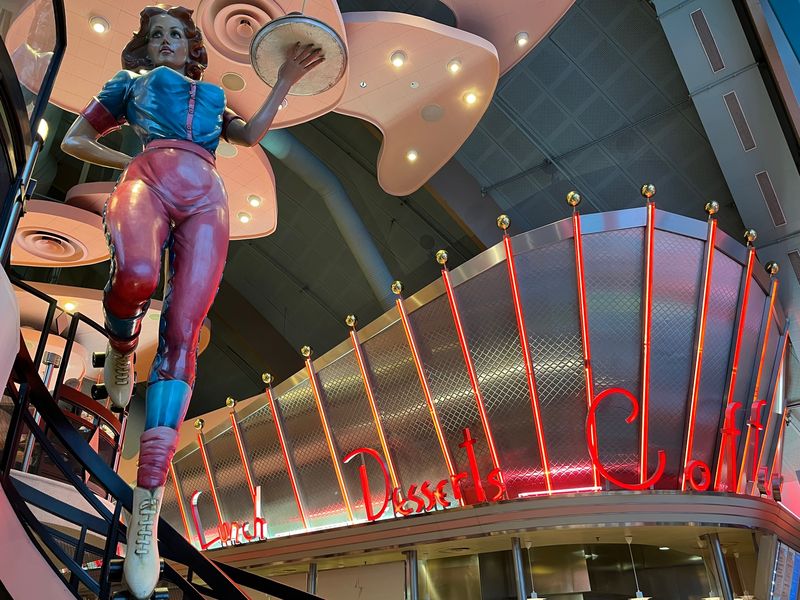 We had a great dinner at Annette's Diner on our first night. Photo by Gregg Jacobs.

We walked out very and tired, so decided to call it a night.

Disney Village is charming (if in need of a little TLC), but not too large, so I feel I got my money's worth and was ready to turn in and rest up for the parks the next day. We strolled back through the village and then around the lake, which is lit up and beautiful at night. 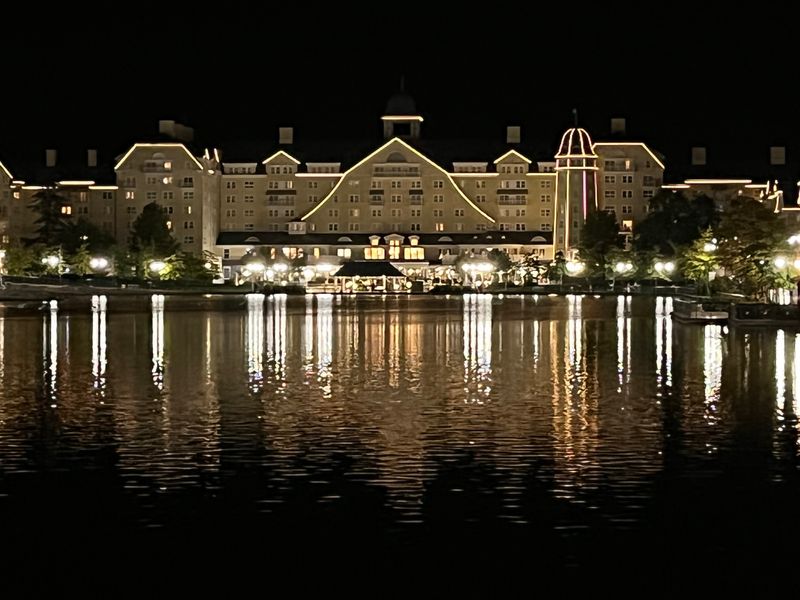 We got back to the hotel, watched a little Disney TV (and channel-surfed) and then hit the hay for the night.

Make sure to come back for my next piece, where we run around the theme parks and I give you some insight into the rides and shows—and wade into the dangerous territory of comparing the attractions to what Disney has stateside.

If want to see more pictures from our trip, check me out on Instagram at @gregginprague. I have a few posts up from Disney.

As I write this, Hurricane Ian is bearing down on Florida and will have hopefully passed without causing too much damage when you read this.  Everyone be safe and well and see you real soon!