Many monorail supporters have been waiting a long time for July 15, 2004. Not a product of a theme park or a world's fair, today, Las Vegas opens a new four-mile metropolitan monorail system. 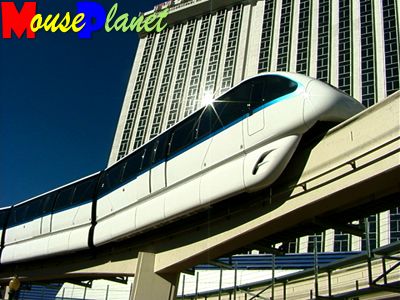 A new Bombardier MVI passes over the Hilton Entrance. Photo by Karl Buiter.

Eventually expanding to a network of 15 miles connecting resorts and businesses from the airport to downtown, this new system will be closely looked at by transit planners everywhere. It may be the model for Seattle's 14-mile system currently under design and approval processes. And it may clear the way for other cities to consider monorail as a way to solve their transit problems. 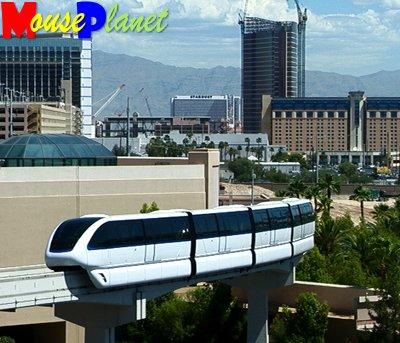 Following the original MGM-Bally's right of way, the new LV Monorail heads north toward Bally's/Paris. In the distance, construction cranes work on the Sands Convention Center expansion. Nearly two miles away, the new 50-story Wynn Resort is topping out construction. The relatively smaller Stardust hotel is further in the background. Photo by Karl Buiter.

Even to the casual observer, Las Vegas is growing at an unprecedented rate. A view of the surface roadways on most weekend nights through the Las Vegas resort corridor reveals a snarl of traffic. With over 100,000 rooms in the area, the population density surpasses Manhattan. 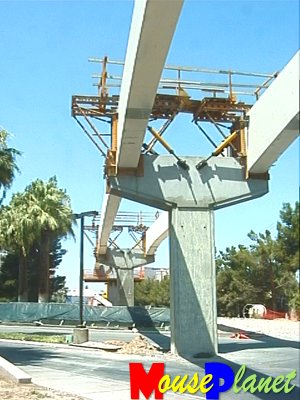 The entrance to the Chamber of Commerce remained open throughout the work. Photo by Karl Buiter.

And this is just the start. New room towers and resort hotels continue to be built at a dizzying pace: 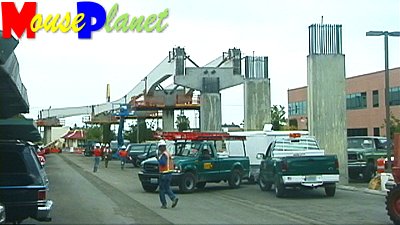 Looking the other direction, beam construction through the Chamber of Commerce parking lot had minimal impact on the surface below. Photo by Karl Buiter.

To handle this level of traffic by a bus network would require 36 buses per hour per route. On Las Vegas Boulevard alone, buses would need to run nose-to-tail every 30 seconds to manage the load, demanding the development of dedicated bus lanes—not feasible given the already limited capacity and available width of the roadways. 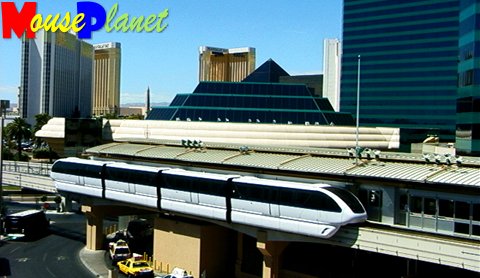 The MGM Station has been reconfigured to handle two 4-car trains on each side. From left to right, the Tropicana, Mandalay Bay, Mandalay Bay "The Hotel" expansion, Luxor pyramid, and a portion of Excalibur are seen in the background. Photo by Karl Buiter.

For those looking for further reference, the Final Environmental Impact Statement for the Downtown expansion is available online.

Call this “Monorail Super-Yellow.” Actually this is the Nextel-sponsored train at Bally/Paris Station. Photo by Karl Buiter.

The elevated fixed guideway alternative offered many advantages. Limited ground footprint provided minimal impact on roadways, both during construction and after. There was no possibility of traffic collisions, an issue that plagues many surface light rail systems. While monorail is popular in Japan, Asia and Europe, in the United States monorails were often considered the product of theme parks or world's fairs. Yet even here, the reliable history, operating efficiency, and profitability of systems such as Seattle's Alweg-based monorail is hard for transportation planners to ignore. 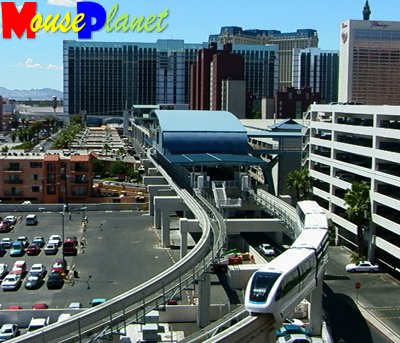 Our route goes up through a narrow passage next to Bally's Hotel (distant), crosses Flamingo Boulevard, then comes to the Flamingo (far) and Harrah's Hotel (near) stations before bending east in the foreground. The strip is to the right in this picture looking south from the Venetian. Photo by Karl Buiter. 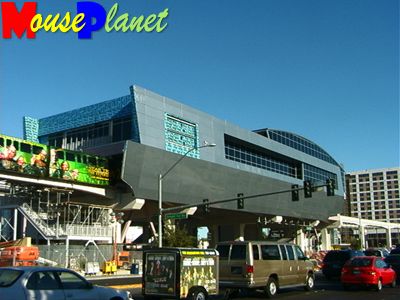 After a nearly two-mile route paralleling Sands Avenue and Paradise Boulevard, the Monorail arrives at the Las Vegas Convention Center station. Portions of this station remain under construction to support a new pavilion for Nextel. Photo by Karl Buiter.

A pilot project commenced in 1993 between MGM and Bally's. After some private study, two proven and retired Bombardier M-series monorails were purchased from the Walt Disney Company. The two six-car trains purchased were the youngest of the retired Walt Disney World Mark IV system - Coral and Lime. Both trains were built in 1977 and certainly had many miles left in them. Minor cosmetic changes to satisfy Disney concerns and rehabilitation was performed on the trains, and in June 1995, the near one-mile route from MGM to Bally's was opened. The system carried 20,000 passengers per day and has largely been considered a success. 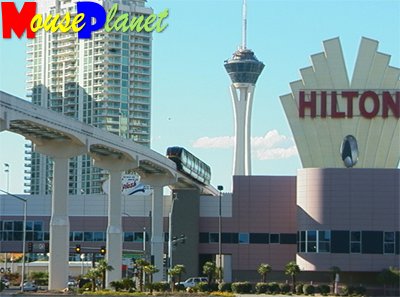 The Monorail rises over 50 feet above the ground as it passes over the Las Vegas Convention Center walkway and meeting rooms. Turnberry Place Condos and the Stratosphere are in the background. Photo by Karl Buiter.

In 2000, a franchise was awarded to then MGM (now MGM/Mirage) and Park Place (now Caesars Entertainment) to expand the system to a nine-monorail, four-mile route. The non-profit Las Vegas Monorail Company was formed. The project was funded without using any tax dollars. Instead, $600 million in non-recourse bonds were issued to cover construction. The operation would pay for itself, as had other monorail systems. This in itself is a new way to fund public mass transit projects. Granite Construction would build the guideway. The monorails would be built and operated by Bombardier. Project engineering was by Carter and Burgess. 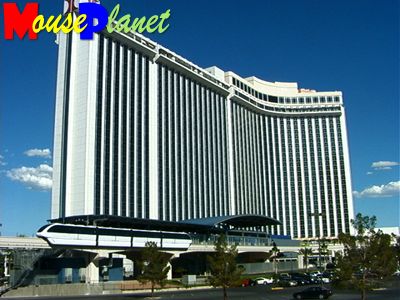 The monorails station is just to the left of the main lobby in front of the Las Vegas Hilton. Photo by Karl Buiter.

Construction commenced in August 2001 using new guideway construction techniques. Pile drivers bore anchoring holes, and pylons were constructed in-place. Once a stretch of pylons were completed, full beams fabricated in a beam construction yard offsite were trucked in and lifted into place. An entire stretch of beams could be lifted into place in a single morning. From my view, it took only six weeks for most sections of guideway to appear and be ready for final electrical and safety walkway installation. 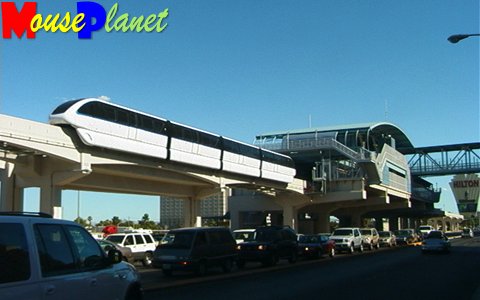 We arrive at the Sahara, located at the current north end of the four-mile route. This route will soon expand another 2 1/2 miles to downtown. Photo by Karl Buiter.

The trains are Bombardier MVI Monorails. Based on the Bombardier Mark VI series currently operating at the Walt Disney World, these new models seat 72 with standing room for 152. In special situations such as event handling, the trains can conceivable handle 376 passengers. This being Las Vegas, dual redundant air-conditioning systems are installed in each car. 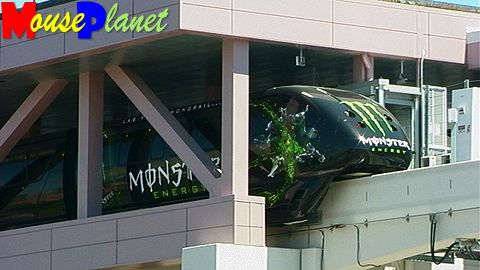 Since then, the Clark County Regional Transportation Commission has approved expansion of the system using public funds to downtown Las Vegas and a spur from the Hilton west to Circus-Circus and the Stardust hotels. Phase III expansion is planned to build the system south to Las Vegas McCarran Airport. Further phases may extend the route from the Stardust behind the casinos along the west side of the strip. In total, 15 miles of monorail line will be built within the resort corridor. 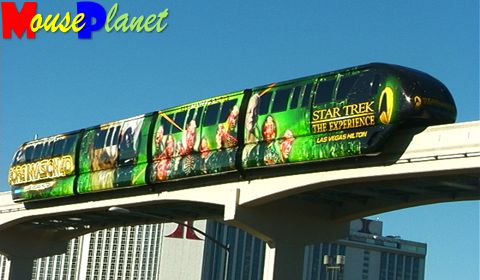 The Star Trek Experience “Monorail Trek” on the towering span in front of the Hilton and Las Vegas Convention Center. Photo by Karl Buiter.

The opening four-mile system is expected to handle 20 million passengers per year with the ability to expand way beyond that in years to come.

For regular visitors of Disney parks, corporate sponsorship is nothing new. In the past many years, the renaming of sports parks and other public facilities has become a new revenue source. For the Las Vegas Monorail system, corporate sponsors including Nextel, Hansen's Monster Energy Drink, the Hilton's Star Trek Experience, and others have decorated several monorails. Nextel's 12-year sponsorship deal, including a pavilion and theatre at the Las Vegas Convention Center station, is estimated to be worth $50 million. 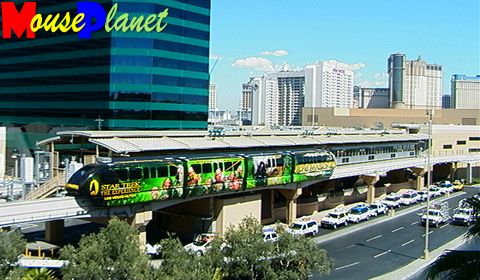 Monorail Trek parked next to the green towers of the MGM Hotel and Casino. Photo by Karl Buiter.

The future of Monorail throughout the United States is bright.

Last year, Seattle voters approved a new $1.75 billion 14-mile system. And while some interest groups continue to fight, the Seattle City Council unanimously approved the transit way alignment on July 7. Construction bids will be unveiled in August with construction not far behind.

See you on board!

What Happened to the old Las Vegas Monorail? 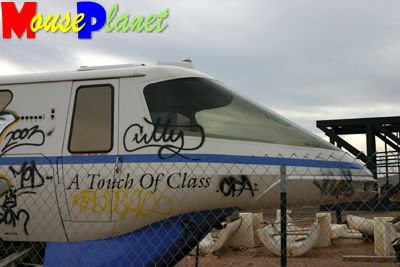 One of the cabs of the Bally's Monorail. Photo by Alex Stroup.

As monorails Coral and Lime, these two six-car monorail trains handled millions of riders at Walt Disney World. Then in 1995, they became the first monorails for the Las Vegas system. Handling 5 million passengers annually until retirement in early 2003, they led the way to the development of a new mass transit system for the city of Las Vegas. 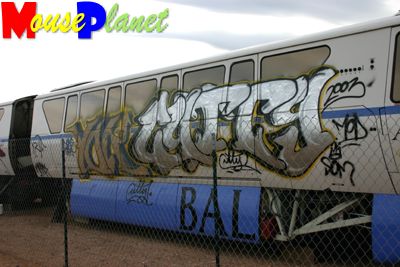 Underneath all the graffiti is a recently functional monorail car. Photo by Alex Stroup.

Now sitting on blocks south of the city [Note: though their location was confirmed last weekend, the monorails seem to have been moved since, after more than a year of exposure.], these monorails have had a less-than-proud retirement. While there is talk of buyers, these monorails remain open to the elements, fully vandalized, in an open storage yard near railroad tracks. There are vehicles of far less historic significance that have been fully restored to sit proudly in museums across the world.

Many of the monorail cars have been tagged. Photo by Alex Stroup. 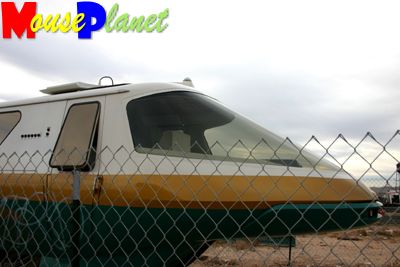 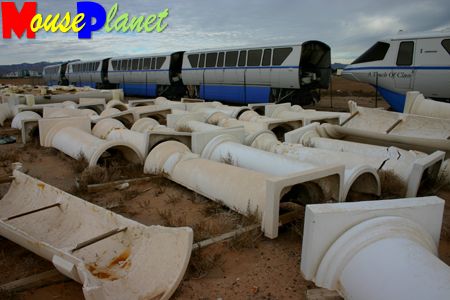 The vandalism is not so bad on the other side. Photo by Alex Stroup. 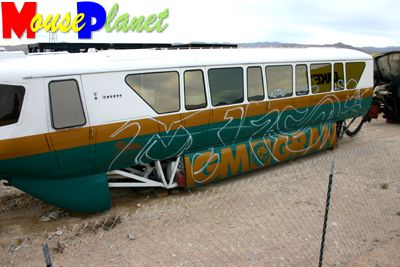 The MGM Grand monorail does have some vandalism. Photo by Alex Stroup. 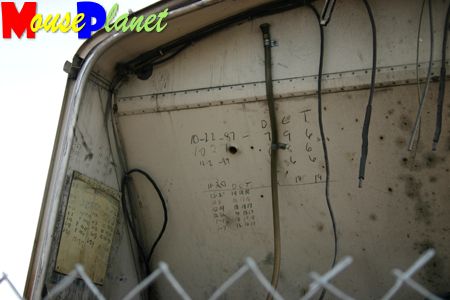 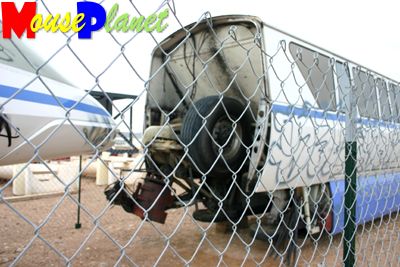 Hours: 8:00 a.m. to midnight during the first few months, with expanded hours in the future.