Happy Birthday Disneyland – Disneyland celebrate its 48th anniversary this Thursday with a small pre-opening ceremony. According to the Disneyland Line (a cast member newletter), “A ceremony will be held July 17 at 7:45 a.m. on Main Street, U.S.A. Cast Members and Guests are invited to join Groove 66 and Disneyland Resort Ambassador Daina Baker in a 'Happy Birthday, Disneyland' singalong followed by rope drop at 8 a.m.”

Planning on visiting the park this Thursday? Join MousePlanet staff and readers at the Central Plaza (“the Hub”) at noon to to celebrate the 48th birthday of the park, and the third birthday of MousePlanet — and pick up your free MousePlanet lapel button!

Although Disneyland has not yet officially announced for s special pin event for this year, Dizpins reports in its July update that Disneyland will offer its All American Pin Quest on Thursday. Clue sheets are available from the Main Street Fire Station beginning at park opening, and there are seven locations from which to obtain clues. Those who obtain all clues then receive a souvenir pin and postcard. Participation is free and only requires admission into the park. 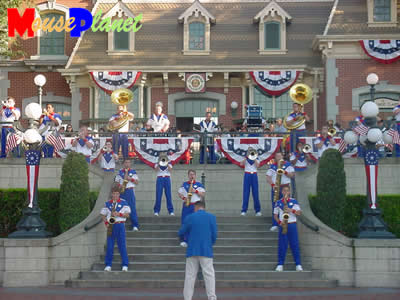 Who's going to replace Drew, anyway? Disney has announced the fall ABC Preview Weekend at Disney's California Adventure for September 6 and 7. While a final schedule is not yet available, the event will include previews from ABC's fall line-up, meet-and-greet sessions with ABC stars, a concert by Jim Belushi's band, and reality show auditions. Not on the schedule is the most popular attraction from the 2002 event, a live performance of Who's Line is it Anyway, staring Drew Carrey. The show has ended production, and does not appear on the Fall 2003 lineup. You can read our coverage of the 2002 event at this link.

May 25 – July 26, 2003 – Mickey's All American Pin Festival. A series of new product releases and mini-events are scheduled during the nine-week promotion. More details and a complete schedule of release dates are available on our MousePad message boards.

New Play 4 Days pass Southern California residents, (zip codes 90000-93599), can purchase a new four-day ticket for just $79. The ticket is valid for four admissions to either Disneyland or Disney's California Adventure park, between June 1 and September 30, 2003. Residents can purchase just one ticket per person, per day, so your out-of-town relatives will need to buy their own, regular-priced admission.

The tickets can only be used at one park each day — no park hopping. We understand that you can use two admissions—one to each park—on the same day, effectively making this a $79 two-day park-hopper ticket, a $20 discount from the regular adult price.

The tickets can not be used at Disneyland on June 28, and July 4, 5, 26, and August 2, 9, 16, 23, 29, 30, and 31. There are no block-out days for DCA. Tickets are nontransferable, and you must show a valid ID each time. These tickets can be applied towards the cost of a Deluxe or Premium Annual Passport, (but not a Southern California Annual Passport), so long as you upgrade when or before you use the fourth admission.

Disney's Armed Forces Salute – Through Friday, December 19, all active members of the United States military (including Coast Guard and activated National Guard and Reservists) qualify for Disney's Armed Forces Salute and can claim one free 3-day park-hopper tickets. Since the tickets expire on December 19, you must claim them by December 17 to use all three day's worth. The passes can only be claimed at a park gate ticket booth. To claim the passes, valid military ID must be shown; activated National Guard and Reservists must also show their active duty orders.

Summer Annual Passholder special – The first ticket promotion this summer is an Annual Passholder special. Through September 3, APs can purchase a 2-Day Disneyland Resort Park Hopper for $69 (10+) and $49 (3-9). Just present your AP at any ticket booth. Limit five tickets per Passholder, per day. Tickets are valid for 14 days from date of first usage. First usage must be on date of purchase. Last usage must be on or before Tuesday, September 16, 2003.

Annual passholder discounts at Alamo – California residents get discounts of up to 20% off Alamo's retail rates in the United States. Disneyland annual passholders can get a free Disneyland Resort Character Breakfast voucher when the rent their car for three days or more through Sunday, August 31, at the Los Angeles Airport location. For more details and the discount code you'll need for this offer, visit the annual passholder section of the Disneyland Web site (link).

ESPN Zone discounts for annual passholders – Disneyland annual passholders can get an Season Ticket Frequent Dining Card at the Downtown Disney ESPN Zone. The Season Ticket entitles you to a free soda with your meal purchase of $6.99 or more. Once you have made four meal purchases, you receive the fifth meal and soda free, and get a chance to win a pair of tickets to the ESPY Awards in 2004. See location for more information and details.

With a Southern California City Pass booklet, you receive admission to five separate entertainment options, including:

Instead of the Disneyland Resort Park Hopper Ticket currently included in California packages from the Walt Disney Travel Company, guests can select a Southern California city's for an additional charge of $47 per pass ($32 per pass for guests ages 3 through 9).

The “Get a 5-Day Park Hopper ticket for the price of a 3-Day ticket” promotion has been extended through January 5, 2004 – These tickets are available when you order online from Disneyland.com (link). Restrictions apply – see site for details.

AAA Passport Plus Package – For $122.75, you can get a 5-day park hopper and the following extras:

A $13.75 FedEx fee applies to each reservation (not per person). This package is available without an air or hotel purchase, and must be purchased at your local AAA affiliate office at least 5 days before you plan to use the tickets.