Disneyland welcomed its 500 millionth visitor on Thursday morning. Bill and Ann-Marie Trow, with their daughter, Aspen, were surprised when they passed through the front gates, setting off flashing lights and a shower of confetti. The Orange County Register reports that the couple is from Wentworth, Australia, and won prizes including a lifetime pass to the Disneyland Resort and a guided VIP tour of Disneyland.

The what on earth?

Now is appears that Disneyland is about to enter the same market. Concept art with the oh-so catchy slogan "The Happiest Homecomings on Earth" has been making it's way around the Team Disney Anaheim building. One source speculates that this promotion will tie into Disneyland's 50th Anniversary celebration, when visitors are encouraged to "return home" to the original Magic Kingdom.

As recently as last spring, Disneyland offered previews of the new Many Adventures of Winnie the Pooh ride to annual passholders at no charge. We hope that a similar event will be planned for APs before the Tower of Terror opens. As one MousePlanet reader quipped, "How about I pay nothing and just not be among the first 500 people to ride? I think I can live with that."

Complete details of the three packages can be found on our MousePad discussion boards. (link)

New and improved - now with a pin!

Disneyland's event staff must be getting desperate. After tickets went on sale last Thursday, the event Web site was updated to feature a new bonus for event attendees. In addition to the lunchtime "ball," the preview of Snow White – An Enchanting Musical and the "Princess Academy" class, those who shell out $89 for the event will get a commemorative pin.

Now, if they would just reinstate the Ball, event merchandise, and romantic dinner - without the ridiculous price tag - there might be some real interest in this event. As it stands, it is going to take more than a pin to bring customers to this watered-down Valentine's Day brunch.

Shag at Disneyland, round 2

After the tremendous response to the Enchanted Tiki Room art and merchandise created by artist Josh Agle, better known as Shag, Disneyland has announced that another collection will be released on Jan. 24. 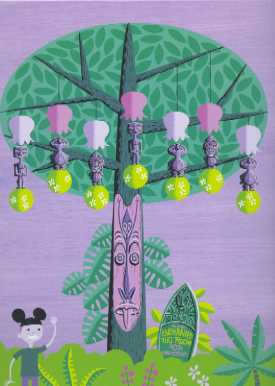 A new collection of merchandise based on the Shag original "Tangaroa" will be released at Disneyland on Jan. 24. Photo courtesy of Disney.

This new collection is based on another of the four original paintings designed for the 40th anniversary of the Enchanted Tiki Room. Products will include a limited edition serigraph, a handbag, shirts, mugs and more. Unlike the last event, no original artwork will be offered for sale, and the artist will not appear.

According to Shag's Web site, this will be the last release of product from the Tiki Room collection. Fans of the artist had heard that Disney wanted Shag to create another collection of merchandise for Disneyland. Unfortunately, fans may have a long wait. Shag is reportedly unhappy with the way Disneyland handled his personal appearance at the last event, and with the amount of 'input' that Disney merchants wanted regarding his art.

Beginning January 6 through April 30, the Disneyland Resort will be offering a new version of the SoCal salute. Residents may enjoy a day at Disneyland and a day at Disney's California Adventure for the price of a one-day ticket. Eligible residents may purchase up to five "2fer" tickets per day with proof of Southern California residency (zip codes 90000 through 93599, or Northern Baja California residents within zip codes 21000 through 22999; valid ID required). "2fer" tickets are priced at the regular one-day ticket prices for the Disneyland Resort theme parks -- $47 for ages 10 and up, $37 for ages 3 through 9 -- and are available at Resort ticket booths as well as at www.disneyland.com. The first day of use must occur on the date of purchase; the second day of use must occur within 30 days of purchase or before April 30, 2004, whichever occurs first.

The new prices took effect December 24, 2003, and all tickets include free parking.

Live an Artful Life with an OC Arts Card

The Disneyland Resort partnering with Arts Orange County sponsor the OC Arts Card, which provides cardholders with benefits such as savings on tickets, classes, merchandise and memberships at more than 40 nonprofit arts venues in the local Orange County community.

Annual passholders can purchase the 2004 card for $37.50, 25 percent off the regular price. In addition, the first 500 passholders to purchase a card receive a second card for free.

For more information or to order a card, visit the OCArts card Web site (link) or call (888) 556-5160. To receive the annual passholder discount, use offer code C04DIAP. The first card is mailed immediately; those who are among the first 500 will have the second card mailed at a later time.

The promotion is valid through March 31, except for blackout dates of February 14 to 16. For more details, visit Disneyland's Disney's Wildfire Heroes Salute Web page (link) or call (714) 520-5069.

Have a Coke and a pass

Specially marked 12-packs and two-liter bottles of Coca-Cola in Southern California are currently offering a $20-off coupon towards the purchase of a new Deluxe or Premium Disneyland Resort Annual Pass. The coupon is valid through January 31.

A Nightmare deal at Costco

In September, MousePad member Tiki Junki purchased a copy of The Nightmare Before Christmas at a local Costco store, and discovered a Disneyland Resort offer inside. The $13 Special Edition DVD comes with a voucher for up to four pre–issued Fastpass tickets for the Haunted Mansion, and a voucher for one free cloisonné pin from the Le Bat en Rouge Shop in New Orleans Square. The vouchers are good until March 31, and are redeemable at Disneyland—there is nothing to mail in, and no four-to-six-week wait for the passes and pin to arrive.

Annual passholders can also book a room at the Paradise Pier hotel for $59. This offer is valid only on Sunday nights, through March.

Instead of the Disneyland Resort Park Hopper Ticket currently included in California packages from the Walt Disney Travel Company, guests can select a Southern California city's for an additional charge of $47 per pass ($32 per pass for children 3 through 9).

A $13.75 FedEx fee applies to each reservation, (not per person). This package is available without an air or hotel purchase, and must be purchased at your local AAA affiliate office at least 5 days before you plan to use the tickets.

This package requires a minimum 2-night hotel stay, and includes: