Ships ahoy – In celebration of Disneyland's upcoming 50th Anniversary, Disney is introducing the world of its Disney Cruise Line to the West Coast. Instead of a adding a third ship to its fleet, however, Disney is moving its Disney Magic from Florida's Port Canaveral to Los Angeles from May to August to add to the celebration of the original theme park in Anaheim. This will also allow Disney officials to determine how well a cruise ship berthed on the West Coast will fare, for potential future consideration.

Ya gotta be both older and tall enough – Disneyland has a new policy in place for children. In order for children to ride any attraction alone, they must be 7 years old or 54 inches tall. This replaces the ambiguous former policy, which stated that younger children should be accompanied by an adult. If the child is not old or tall enough to ride alone, they must be accompanied by a "responsible party" who is at least 16 years old OR 54 inches tall. Some rides have specific requirements that the responsible party sit in the same row as the child, or be in the same vehicle. If there are not responsible parties to share a row/vehicle with each child, the group can use the "child swap" system as necessary. Disney cast members can not watch your children while you are on the ride, and can not ride with your child if there are not enough responsible parties in your group. 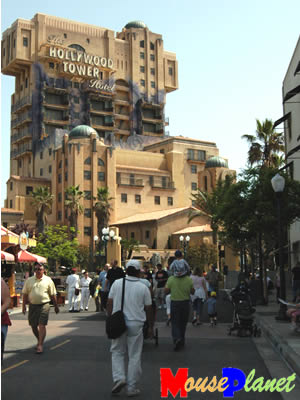 All of the rumors, anticipation, previews and reviews have led up to this week in DCA history, as the Twilight Zone Tower of Terror finally opens to the public on Wednesday, May 5. 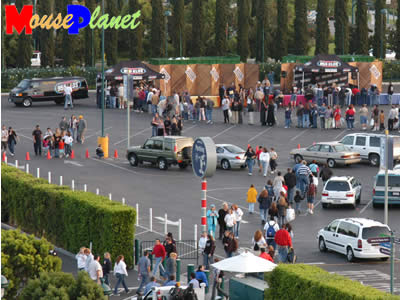 KLOS listeners line up to claim their tickets to the radio station's private preview of Tower of Terror. Photo by Adrienne Vincent-Phoenix. 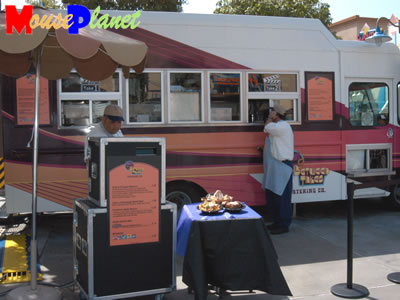 Between Takes is open for business after a long hiatus. Photo by Adrienne Vincent-Phoenix.

The new ride has resulted in some visible changes around the Hollywood Backlot District. While Hollywood and Dine remains shuttered, Between Takes, a concession stand that has been vacant since just after DCA opened three years ago, is finally back in business. 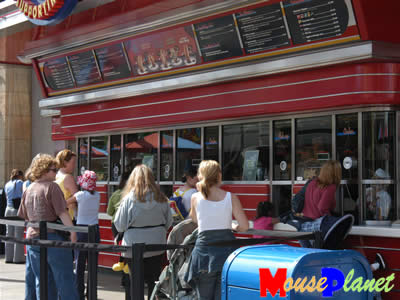 Queue stanchions have been placed in front of the Award Wieners to to handle the overflow crowds at Award Wieners. Photo by Adrienne Vincent-Phoenix.

The same holds true for the Fairfax Market, which usually opens only on the busiest attendance days. Belt stanchions outside Award Wieners now attempts to control that location's sprawling lines. 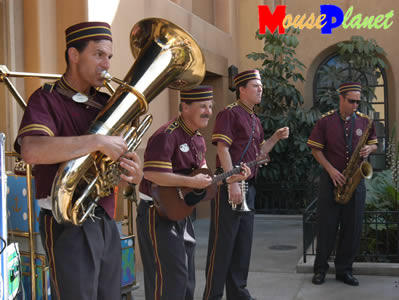 The Bellhop Band entertains visitors as they wait to ride Tower of Terror. Photo by Adrienne Vincent-Phoenix.

The first of two new “streetmosphere” shows debuted this week. The Bellhop Band features an on-loan member of Disneyland's Dapper Dans and three other musicians in a 30-minute performance outside the Tower of Terror. The group performs arrangements of classic Disney tunes and popular songs, and encourages audience interaction. Their equipment is on two rolling luggage racks, cleverly disguised as the luggage of Disney characters. Look closely to see Belle's valise, Herbie's trunk, and Minnie's hat box. 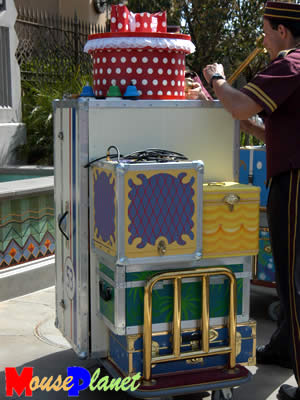 Before you head to DCA to ride the new attraction, stop by Disneyland.com Web site to pick up your Fastpass ticket for Tower of Terror. For the first time ever, the Disneyland Resort is allowing visitors to get Fastpass tickets online. There is a catch, of course—you must download, play, and complete the Tower of Terror game (link). The game has five “episodes,” with a “reward” after you complete episodes 2-5. The first three prizes are coupons, good for 10 percent, 15 percent and 20 percent, off qualifying merchandise purchases. The prize for completing episode five is a voucher redeemable at DCA for up to six Fastpass tickets to Tower of Terror.

You must redeem the vouchers in person at a specified location outside of the attraction, and a limited number of tickets are available each day. If you arrive after all of the special Tower Fastpass tickets have been distributed, you will be offered Fastpass tickets for California Screamin' or Grizzly River Run.

Last week's Park Update: Disneyland was already filed for publication before the Tower of Terror Merchandise Special Event, so we were unable to pay a much-deserved compliment to the merchandise team for a fantastic event. MousePlanet staff and readers agree that this event restored their faith in merchandise events. 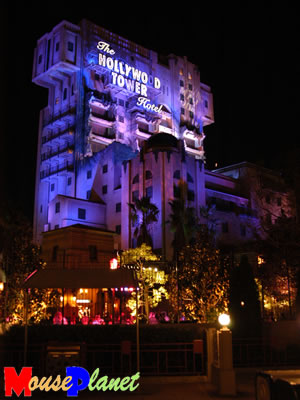 Tower event-goers got to enjoy the ride lit in all its nighttime splendor. Photo by Adrienne Vincent-Phoenix.

There were four packages available for Friday's event. Three allowed entry when the event started, the fourth was valid for admission after 9 p.m. The early-entry guests were greeted by a live band playing 1930s music, tables of hot and cold appetizers, an open bar, self-serve soft drinks, and a large area with ample seating for everyone. Hosts and hostesses circulated with trays of beverages and desserts. 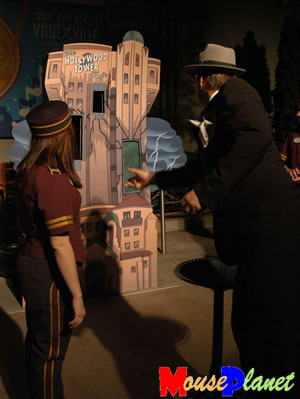 A game area near the Hyperion Theater featured five different skill games. At registration, all attendees were given a Minnie Mouse pin and a coupon book for the five games. The matching Mickey, Goofy, Pluto, Donald and Daisy pins were awarded as the “prizes” for each game. Of course, everyone was a winner. The games were a lot of fun, and entertainment department cast members were heard plotting how the games could be incorporated into future events. 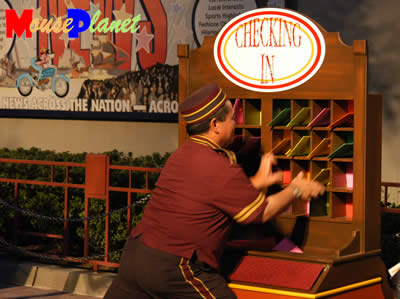 A game pits guests against the bellhop to deliver mail to the right boxes. Photo by Adrienne Vincent-Phoenix.

For most attendees, this was their first opportunity to ride the Tower of Terror, so a line quickly formed once the ride opened. Riders moved swiftly through the queue, and many were able to ride four or five times before the last group of guests were allowed into the event. Even after those guests joined the event, the lines moved quickly, and riders could experience the attraction as often as they wanted until midnight.

At the ride exit, a pair of Imagineers watched the reactions of riders are they exited, and chatted with those who noticed some of the many Twilight Zone references hidden in the photo room. According to the ride's art director, there are 93 references to the Twilight Zone television show scattered throughout the building. Disney has not released a master listing. [Help us document all 93 references on our MousePad discussion boards.] 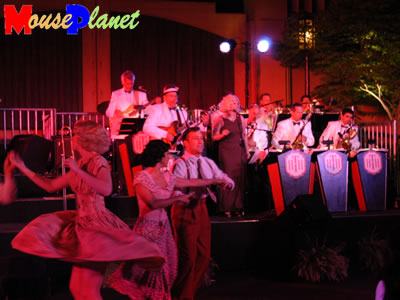 Unlike the overscheduled events that Disneyland had become known for, this event had no real itinerary. Attendees were able to stroll from area to area, playing games and enjoying the entertainment, sipping and nibbling as they went in what turned out to be a pleasant and relaxing experience. While there were no goosebump moments, the event also lacked catastrophes, mile-long lines, and major misses. As guests began to leave the park at the end of the evening, they were presented with a beautiful parting gift of a working pocket watch, decorated with Tower of Terror artwork and presented in a clear display dome.

One attendee said, “Overall, I was very pleased with this event, particularly in the value-to-cost ratio. I would do it again. I just wish Orlando would learn from Anaheim how to really pull off a first-class event.” One MousePlanet reader who had decided not to go to this event said, “Now I am kicking myself. The pocket watch sounded so cool.”

Tickets for the next merchandise special event, the 2004 Haunted Mansion Holiday event scheduled for Thursday, September 30, goes on sale May 24, 2004. You can register at the Disney Gallery Web site starting at 9:00 a.m. PDT (link).

50 reasons to ignore the Tower

While the first day guests will be busy riding DCA's new attraction, the eyes and lenses of local and international media will be focused on Sleeping Beauty Castle in Disneyland. The much-delayed formal announcement of the plans for Disneyland's 50th Anniversary celebration will take place at a press conference Wednesday morning.

This event is being heralded as a “Magical Worldwide Announcement,” and a similar event is taking place at Walt Disney World the same day. The Disneyland announcement will take place in the Castle courtyard as the park opens at 10:00. Although the announcement is designed as a media event, park visitors should be able to get a glimpse of—and certainly hear—the announcement.

The presentation is expected to last about 30 minutes, and will include the Disney cast member choir performing a new song composed for this event. We hear that several big-name Disney celebrities are expected to be in attendance.

…There will be a test of the Believeƒ There's Magic in the Stars fireworks on Wednesday, May 19 at 9:15 p.m. The park is scheduled to close at 10 that evening. 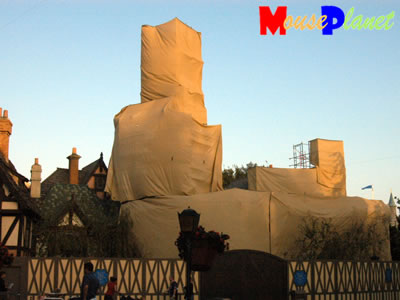 The Disney Treasures offer for APs

Annual Passholders can receive a copy of The Disney Treasures book, worth $60, when they apply for a Disney Visa card. The book will be mailed after the cardholder uses the new account. Apply by phone at 1-800-640-5306, and mention card code 26FF.

Disneyland Resort Annual Passholders save up to 20 percent on car rentals from Alamo Rent A Car and National Car Rental. Restrictions apply—get full details and the necessary discount codes on the Annual Passholder Web site (link).

Disneyland Resort Annual Passholders can save 50 percent off the regular price of tickets for the following home games of the Anaheim Angels baseball team, which plays at nearby Angel Stadium of Anaheim (formerly Edison Field):

Although there is no limit to how many tickets a passholder can purchase, you must use mail or fax in the order form provided at the Annual Passholder Web site, and you cannot purchase these tickets online or obtain them at the ticket window on the day of the game. See the passholder Web site for details (link).

If you are a AAA member, you can take advantage of these packages that include hotel nights and theme park tickets, along with extra ammenities:

These packages require a minimum two-night hotel stay, and are good for travel between April 18 to July 1, August 29 to November 21 and November 28 to December 23, 2004. You can book this package through your local AAA affiliate travel agent.

If you don't need a hotel room, the Passport Plus Package offers AAA members a discount on Park Hopper tickets, and comes with extra benefits:

An additional handling fee of $10 is charged per mailing address. These tickets are available to AAA members only when purchased through AAA offices.

For shorter stays, AAA offers 2- and 5-day tickets for the Disneyland Resort:

Note: The Southern California CityPass does not include the $10 ESPN Zone Arena Game Card, or the California package's feature that allows guests to collect multiple Fastpass tickets at once for free in advance.