“We are closed. Go away (but please come back tomorrow!)”

Start spreading the news: Disneyland is closing to the public on Wednesday, May 4, 2005 to make final preparations for the park's 50th Anniversary celebration, scheduled to start the next day. The resort has begun notifying Annual Passholders in their renewal notices, and vacationers who book through Disney Travel.

Disney's California Adventure (DCA) park will be open on May 4 to accommodate those who still intend to visit the resort that day, or who perhaps miss the announcement.

Fire on the theater

As we reported in last week's Park Update: Disneyland, a small electrical fire in the Playhouse Disney sign forced the evacuation of DCA's Hollywood Backlot District on May 15. Eyewitness reports of the duration of the closure ranged from 90 minutes to over eight hours. 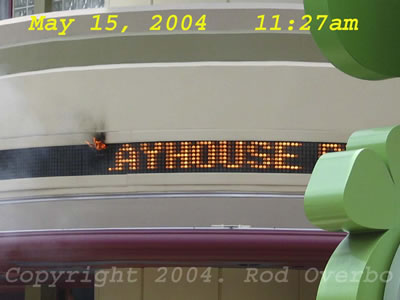 Several readers have confirmed that the area was closed for just over an hour, and told us that the fire was put out by the Disneyland fire department, with help from Anaheim firefighters. MousePlanet reader Rod Overbo happened to be in the area when the fire broke out, and was able to to snap a photo of the “904-visible” (Disneyspeak for a fire visible to park visitors) at Playhouse Disney in Disney's California Adventure park.

Tickets to the 2004 Haunted Mansion Holiday event at Disneyland go on sale at 9:00 a.m. (Pacific time) today (Monday, May 24). Four packages— named after major characters from Nightmare Before Christmas—are available, ranging from the $2,275 “Jack's Christmas Morning Surprise” package to the $85 “Zero” ticket:

A reader asked, “Do they realize the irony of that name? Because 'zero' is about what you get for your $85!” Others noted that the “shopping ticket” at last month's Tower of Terror event was only $59.

Disneyland sources tell us that this is the last year that the Haunted Mansion Holiday event will take this format at Disneyland, and speculate that the Nightmare Before Christmas-themed events will move to Walt Disney World in 2005. Disneyland could then host events based on the “classic” Haunted Mansion, or move onto a new attraction.

Another source tells us that DCA may be the home of future Halloween events, noting that the back story for the newly opened Tower of Terror ride claims that the lightening strike that damaged the building occured on October 31, 1939.

Full details and prices of the four packages are available at the Disney Gallery Web site (link).

MousePlanet reader Isaac sent us an updated copy of the Disneyland Resort refurbishment schedule. Among the changes, the Enchanted Tiki Room, Aladdin's Oasis and the Plaza Pavillion will be closed July 30, 2004 to March 12, 2005. This puts the squelch on rumors of a Lilo & Stitch “Mele Kalikimaka” (Merry Christmas) overlay of the Enchanted Tiki Room, and has launched speculation that the Plaza Pavillion may once again be used as a restaurant.

If you book a three-night resort stay at any of the Disneyland Resort hotels during the 50th anniversary promotion, your package includes a four-day Park Hopper ticket, a special 50th anniversary commemorative clock and a Walk in Walt's Footsteps tour.

The “50th Celebration Package” is available onlyfor three-night stays, with arrival dates May 5 through December 31, 2005. The package can be booked through the Disneyland Web site (link), or by calling (714) 520-5060.

The Disney Treasures offer for APs

Annual Passholders can receive a copy of The Disney Treasures book, worth $60, when they apply for a Disney Visa card. The book will be mailed after the cardholder uses the new account. Apply by phone at 1-800-640-5306, and mention card code 26FF.

Disneyland Resort Annual Passholders save up to 20 percent on car rentals from Alamo Rent A Car and National Car Rental. Restrictions apply—get full details and the necessary discount codes on the Annual Passholder Web site (link).

Disneyland Resort Annual Passholders can save 50 percent off the regular price of tickets for the following home games of the Anaheim Angels baseball team, which plays at nearby Angel Stadium of Anaheim (formerly Edison Field):

Although there is no limit to how many tickets a passholder can purchase, you must use mail or fax in the order form provided at the Annual Passholder Web site, and you cannot purchase these tickets online or obtain them at the ticket window on the day of the game. See the passholder Web site for details (link).

If you are a AAA member, you can take advantage of these packages that include hotel nights and theme park tickets, along with extra ammenities:

These packages require a minimum two-night hotel stay, and are good for travel now through July 1, August 29 to November 21 and November 28 to December 23, 2004. You can book this package through your local AAA affiliate travel agent.

If you don't need a hotel room, the Passport Plus Package offers AAA members a discount on Park Hopper tickets, and comes with extra benefits:

An additional handling fee of $10 is charged per mailing address. These tickets are available to AAA members only when purchased through AAA offices.

For shorter stays, AAA offers 2- and 5-day tickets for the Disneyland Resort:

Note: The Southern California CityPass does notinclude the $10 ESPN Zone Arena Game Card, or the California package's feature that allows guests to collect multiple Fastpass tickets at once for free in advance.

Entertainment schedule: Go directly to the Disneyland Resort schedule for May 24 to 30 at Disneyland.com here.