In a long-awaited report of its findings and recommendations regarding the July 8 Big Thunder Mountain Railroad accident that sent three passenger to the hospital for minor injuries and injured at least two more, the California Division of Occupational Safety and Health (DOSH) cited two factors in the accident (read our MousePlanet coverage here).

According to the report released last Friday afternoon, a ride operator who had only been working in his position for three days failed to follow the proper procedure to remove a train from the rotation. This error sent a train full of passengers into the occupied side of the station. 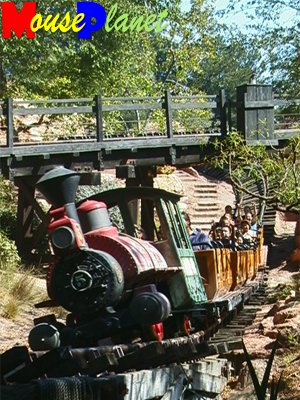 DOSH also found that the ride control system failed to prevent the train from entering the station when another train was on the same spur, although the report noted that five “unique and rare conditions” occurred in specific order to cause the accident.

The report detailed corrective actions necessary—including retraining the cast member and enhancing the ride control system—to resume operation, and indicated that those actions had already been completed. A copy of the DOSH report is available online (link).

In a prepared statement, Greg Hale, chief safety officer of Walt Disney Parks and Resorts, said, “We agree with the report and have taken all the required corrective actions. We remain committed to driving continuous improvement and upholding the high standards that keep us at the forefront of ride safety.”

The ride reopened Friday night, less than three hours after the DOSH report was released.

MousePlanet is pleased to announce the return of its popular MouseAdventure puzzle-and-hunt event. This time around, we're going to be in Disney's California Adventure on Sunday, October 10, 2004.

MouseAdventure is a popular and fun quest-based event produced by MousePlanet and held regularly at the Disneyland Resort in Anaheim, California.

No dice for Garden Grove

On August 18, the Associated Press reported that Garden Grove city officials were in talks with developer Steve Wynn to build an Indian casino two miles south of Disneyland. The development would require the city to sell land to, or trade land with, the Mesa Grande Band of Mission Indians, who could use the Garden Grove parcel to build a casino and entertainment center.

The plan drew heated debate from local residents, and was the main subject of discussion at the city's August 24 council meeting. Citing potential controversy, the council voted at that meeting to reject the proposal. In an interview with the Las Vegas Sun earlier that week, Winn said that reports of his involvement were exaggerated, and that he wanted no part of the project until the land use issues had been resolved.

The Disneyland Hotel has transformed a bedroom in the Presidential Suite into a re-creation of Princess Mia's room from The Princess Diaries 2: Royal Engagement. Located on the top floor of the Sierra Tower, the Princess Suite is decorated with furnishings from the original movie set, and pieces from a new Drexel-Heritage furniture collection.

Scattered around the room are photos of the film's cast and crew, including candid shots of stars Anne Hathaway, Julie Andrews and producer Garry Marshall. Of the items showcased in the suite, the bed, bench, slipper chairs, demilune chest and dresser can be ordered through Drexel-Heritage retailers (link). 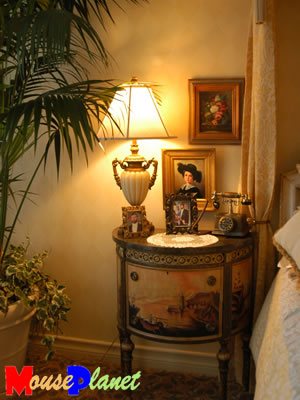 Like the demilune chest? You can order one for your own castle. Photo by Adrienne Vincent-Phoenix.

When you're done looking at the décor, the room also has a fantastic view of Downtown Disney and the Disneyland fireworks. Tea service is already laid out in the room, and a variety of princess-themed items or services can be booked for an additional fee. 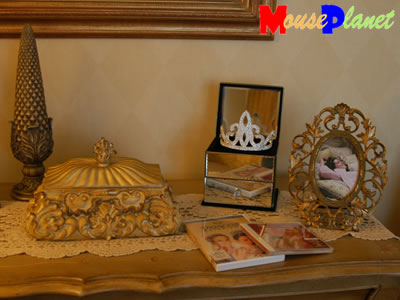 When you're a princess, you can take some of the decorations—the CD, DVD and tiara are yours to keep. Photo by Adrienne Vincent-Phoenix.

The Princess Diaries Suite can be booked by itself, starting at $430 per night, or as part of the larger Presidential Suite, starting at $1,400 per night. Actress/model Anna Nicole Smith was the suite's first official guest.

When “The Happiest Faces on Earth… A Disney Family Album” was first announced, prospective participants submitted photos and crossed their fingers, hoping that they would be lucky enough to have their photo chosen for the project. If this sounds like you, relax—your odds may be better than you think. 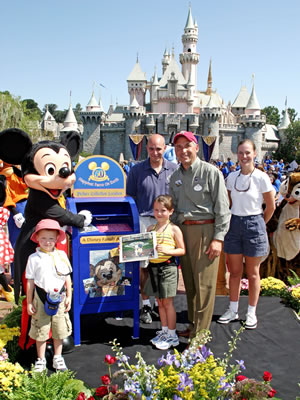 By some accounts, photo submissions are arriving slower than expected, and cast members are being encouraged to “chat up” the promotion at every opportunity. One cast member joked that as long as you aren't doing something vulgar in the photo, you have a good chance of being included. Don't worry if you think your photo is similar to every other Castle shot out there, or has the wrong background color—photos can be cropped and colorized before use. So dig out those photo albums, and find that adorable photo of your child meeting Mickey Mouse for the first time. You can get complete details and instructions for submitting your photos at the Disney Web site (link).

What do you do when you win Olympic gold?

Olympic gold medalist Michael Phelps and his teammates Lenny Krayzelburg and Ian Crocker, in their first public appearances in the United States since winning in Greece, begin a 12-city “Disney's Swim with the Stars” tour. The tour begins August 31 at Walt Disney World Resort in Florida and ends at Disneyland Resort in California.

On August 31, the three swimming champions will serve as grand marshals in a celebratory parade in their honor at the Magic Kingdom and lead a special swimming clinic at Disney's Typhoon Lagoon water park.

Each city stop will also feature a two-hour swimming celebration show, presented by Disney, which showcases the accomplishments of each swimmer. Each show will include demonstrations, rematches from Athens and a relay with the stars and special guests. The tour itinerary is:

…Names Unraveled, a Disneyland tenant that sells personalized items from a cart in Fantasyland, is getting a new home. The company will soon offer its wares from the now-unused Geppetto's Toys and Gifts store location in Fantasyland. Geppetto's was once the park's destination doll and teddy bear shop, and closed when the Tinker Bell Toy Shop was transformed into a Disney Princess store. 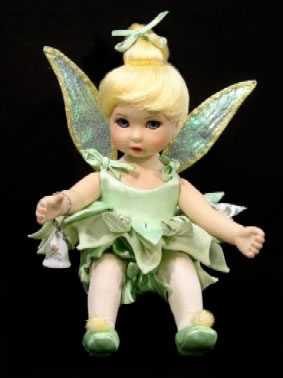 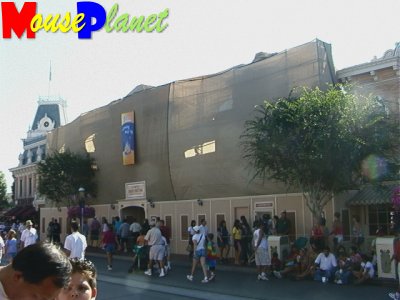 The Emporium on Main Street gets spiffed up in preparation for the park's 50th anniversary next year. Photo by Karl Buiter. 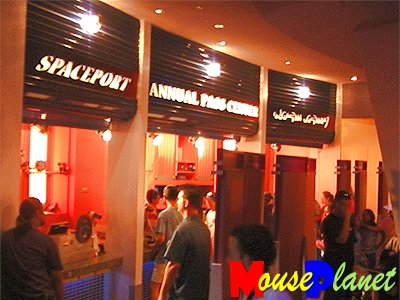