We all wish for a yellow submarine...

Last Tuesday a member of our MousePad discussion boards shared the exciting news that a submarine was spotted in the Tomorrowland lagoon. Several MousePlanet readers, and our own Karl Buiter, made trips to the park that afternoon to confirm the sighting. The submarine was clearly visible alongside the dock, draped with a sign reading, “We're Imagineering a new idea.” In an interview published last week in the Orange County Register, Disneyland Resort President Matt Ouimet confirmed that Imagineers were “testing the waters” to see if the subs could be used in a new attraction. 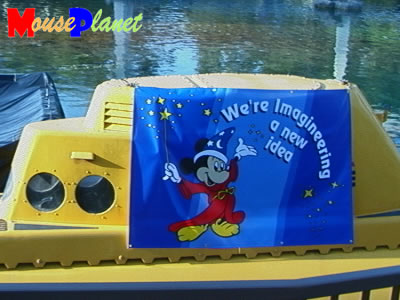 A bright blue sign on a bright yellow submarine may point to a bright new Tomorrowland attraction. Photo by Karl Buiter.

A tarp-covered box is in the water next to the submarine, and a wooden ramp leads from the dock to the sub. According to one rumor, the box is actually a “dry tube,” and contains a potential show element being evaluated for the new, Finding Nemo-themed attraction. By placing audio-animatronic figures inside a sealed tube protected from the water—and more importantly, the chlorine—of the lagoon, Imagineers hope they can use more articulated, realistic characters in the new ride. A source says that Disney execs are using the sub as a demonstration theater, so riders can experience the proposed effect from the ride vehicle. 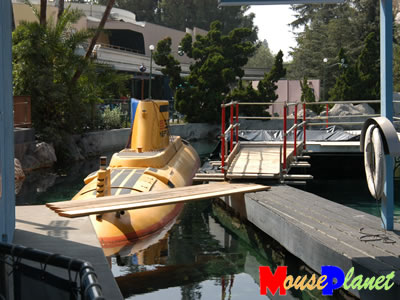 The future of the proposed ride may rest on the special effects inside the tarp-covered box. Photo by Adrienne Vincent-Phoenix.

Whatever the reason, whatever the test, the mere sight of a submarine back in the lagoon that has been empty for 6 years seems like cause for celebration. But some warn that this test is for evaluation purposes only - even if the proposed effect is a hit, the long-neglected Submarine Lagoon may need more work - and more financial investment - than Disney is willing to commit.

In a possibly related aside, MousePad member Chris Ryan discovered an event listing on Craigslist.org for a "Free Screening of New Show: Kids Of All Ages & Parents." The listing read, "We’re looking for kids ages 4-16 and their parents to participate in a fun, new interactive Disney experience," and asked that respondents have "no past participation in the Finding Nemo attraction please."

The sessions are Tuesday, September 28 and Thursday, September 30 at the Imagineering offices in Glendale. Update: The listing was removed from Craigslist.org sometime Monday, but several MousePlanet readers have reported that they will be attending one of the sessions.

Disneyland has finally announced more details about the new Myths, Mysteries and Legends tour, and will begin selling tickets this Friday, September 25. The tour is $25 per person, and lasts 2 1/2 hours. Participants will ride three "E" ticket attractions - Tower of Terror, Indiana Jones Adventure and Haunted Mansion Holiday. Visit the Disneyland Web site for more information about the tour. (link) A few details are not addressed, including dates and times. Our information is that the tour will run Monday - Thursday, October 4 - November 16. The tour will start when DCA closes at 6, and ends after Disneyland closes at 8.

If you would like to join other MousePlanet readers on a private tour, please visit our MousePad discussion boards and let us know which date(s) you are available. (link) We'll post the results here next week, and give you information on how to purchase tickets to tour with our group.

A mime is a terrible thing to waste

All puns aside, fans of Mark Wenzel, better known to Disneyland visitors as New Orleans Square's own Lagniappe, were shocked to learn that the mime was given two week's notice last week. Cuts in the entertainment budget have slowly reduced the number of “atmosphere” entertainers in New Orleans Square in the past year, and Lagniappe was one of the last “solo” performers left in the area.

Visitors who have encountered Lagniappe relate stories of the mime leading them on tours of the Disney Gallery, handing out colorful strands of beads, and pointing out little-known secrets of New Orleans Square.

Mark's fans and fellow cast members have organized a letter-writing campaign, and have asked MousePlanet readers to send letters of support for Lagniappe as quickly as possible to Adrian Fischer (Lagniappe's direct supervisor), Scott Given (head of entertainment for the resort) and/or Disneyland Resort President Matt Ouimet at the main Disneyland address:

Lagniappe's supporters tell us that his last day is scheduled to be this Saturday, September 25. Mark maintains a Web site, where you can see photos of Lagniappe around Disneyland (link).

As previously reported, Taste Pilot's Grill in DCA installed new self-serve ordering kiosks inside the restaurant, and began testing the system last week. In the interest of science and hunger, MousePlanet sent a volunteer to try out the new machines last week. 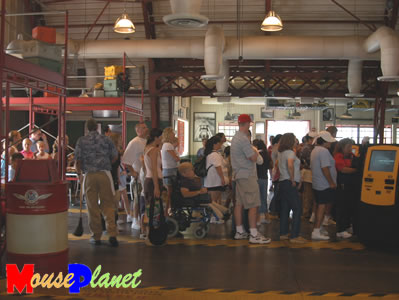 The touch-screen kiosks are pretty simple to operate, and use a graphic interface to guide customers through the ordering process. Menu items are grouped into categories: Entrees, beverages, desserts, kids meals, and so on. When you select a category, you are presented with a photo and price of each item available. Customers choose an item by touching its on-screen icon, and then the real fun starts.

While a cast member might be uncomfortable trying to “upsell” you to a more expensive meal, the kiosk has no such compunction, and automatically offers you an upgrade on most anything you order. Order a hamburger and french fries combo, and the program asks if you want onion rings instead—for 50 cents more. It then asks you if you want a “refreshing beverage” to go with that. Order a soft drink, and the machine offers to serve it in an $8 souvenir cup. It's actually quite relentless; where a cast member might give up after one rejection, the kiosk keeps trying.

Once you complete your order, the kiosk prompts you to present any discount cards. Annual passholders and cast members can slide their ID cards through the reader, and the discount is applied to the order. Then the program asks for your payment: You can slide a credit card, or feed cash into the machine. When the transaction is approved, a printed receipt slides from a slot, and your next stop is the counter to pick up your meal. A simple order can be completed fairly quickly: Our volunteer timed her transaction at 93 seconds, even with a side trip to the customization screen.

There is a still room for improvement in this new system. The kiosk allows you to remove unwanted condiments from your food, but does not allow you to add items or make substitutions. Unfortunately, the customizing process is not readily apparent to some users, and our volunteer watched as several customers asked to make changes to their order after they got to the pick-up counter, creating a delay as their food had to be remade.

Demonstrating that all technology is only as good as its programming, the kiosks needed to be updated after just two days in use—a new “crazy straw” was introduced after the machines were programmed, and customers wishing to purchase one had to complete another transaction at the pickup counter because the kiosk lacked the ability to sell it to them.

Another major drawback to the system is evident when families decide to let their children use the kiosks. While it is surely cute and charming for parents to watch their little Billy play with the graphics-laden computer program, the crowd of people in line behind them might not be so amused. Our volunteer watched as one family took 9 minutes to place their order, mainly because they allowed each of their four children to place their own individual orders.

Some speculate that this system is being tested because it could allow Disney to cut the number of cashiers needed to operate the restaurant. Yet the kiosks are currently still staffed by cast members, one for every two lines as always, who assist customers in placing their orders. The wheelchair accessible lane will also have a human cashier at all times. Cast members tell us that the machines will soon be able to take orders in Spanish and possibly Japanese, which will be a real benefit to tourists.

It might be that the ordering process is sped up by using the kiosks, but there appears to be no major labor savings yet. But if the relentless prompting of the kiosks is an indicator, the true financial benefit of the new machines may lie in the number of customers who agree to purchase a crispy rice treat they don't really want, just to make the machine stop begging. 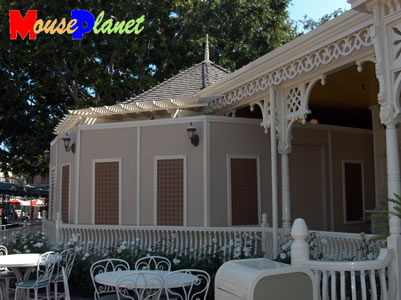 The Plaza Pavillion gazebo may be the future home of the Coke Corner piano players. Photo by Adrienne Vincent-Phoenix.

...Coke Corner ragtime piano player Rod Miller may get a new home this fall. When the construction walls come down from around the Plaza Pavillion, Miller and his piano may be relocated to the "gazebo" on the Pavilion's patio. The new positioning is supposed to create space for more dining tables outside Coke Corner, and place Miller in a more focal position. 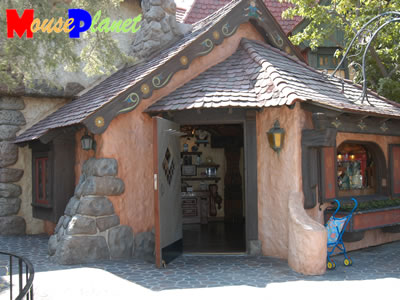 ...A cast member posted on our discussion boards that there might be some changes in the works for two of the character dining offerings at the Disneyland Resort. According to this post, Disney princesses, and not Pooh and friends, will host the Plaza Inn character breakfast, while Mickey and pals will take over from Ariel at the restaurant currently known as Ariel's Grotto. Another cast member says that these changes are still in the planning stage, and have not yet been approved.

...A number of new budget cuts take effect this week, limiting the operating hours of some stores. Effective today, the Disney Gallery in New Orleans Square is closed Monday through Thursday. The store opens at noon on Friday, Saturday and Sunday, but closes three hours before the park each night.

In Tomorrowland, the Winner's Circle store is closed until noon each day, although if the Nemo ride gets the green light, the store may be scrapped to make room again for the ride queue. 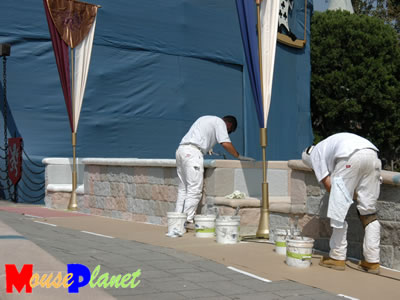 Workers apply a coat of primer to the brick walls in front of Sleeping Beauty Castle. Photo by Adrienne Vincent-Phoenix.

...Two MousePlanet readers have now reported that they were encouraged by main entrance cast members to renew their soon-to-expire annual passes before the end of 2004. One was told only that a “new program” would be announced in 2005 that would eliminate the less-expensive passes, and the other was told that the price of a premium annual pass would jump to almost $500 per person.

There have been rumblings for years that the annual pass program would be dramatically revised around the time of the 50th anniversary, but this is the first we've heard of cast members openly discussing the potential changes. With Disney actively pushing the annual pass program, adding another low-cost pass earlier this year and even changing the recording on the incoming parking trams to promote the passes, it seems unlikely that any changes to the program would be implemented in time to have an effect on attendance around the 50th. Even if the program changes in January, passholders who purchase or renew their passes through December will have 12 months, well past the anniversary date, to use their current passes under the terms of the existing program. 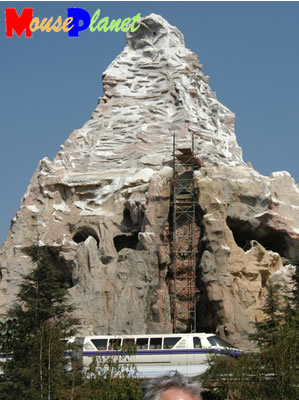 Work continues on the Matterhorn. Photo by Adrienne Vincent-Phoenix. 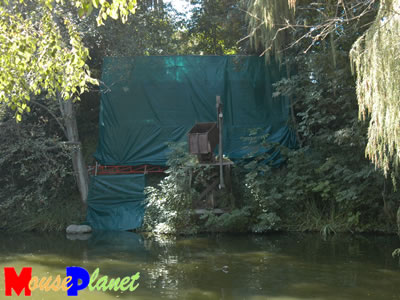 The mine show scene across from Big Thunder Mountain is covered with a tarp as restoration work continues. Photo by Adrienne Vincent-Phoenix. 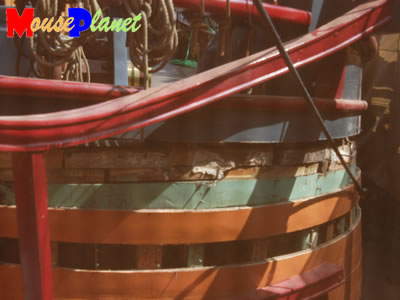