On October 5, Jaime and Carmen Torres filed a wrongful death lawsuit on behalf of themselves and the estate of their son, Marcelo Torres. Marcelo Torres was killed in the September 2003 accident on Disneyland's Big Thunder Mountain Railroad. Additional suits were filed by Vicente Gutierrez, Marcelo Torres' best friend, and five members of the Van De Keere family, citing physical and emotional injuries suffered during and after the accident.

For a detailed analysis of the final incident report about this accident, see our Big Thunder Mountain coverage page (link).

Note: MousePlanet's breaking-news coverage of the accident was selected as a finalist in the 2004 Online Journalism Award, presented by the Online News Association and the USC Annenberg School for Communication, in its “Breaking News — Small Sites” category. See the complete text of our press release here.

And a good time was had by all

MousePlanet's 9th MouseAdventure event was held this weekend, and as we are gratified to be able to say each time, it was our biggest event ever. Over 350 participants from 117 teams competed in a series of quests around Disney's California Adventure. MousePlanet will have complete coverage of the event later this week.

Visitors to Disney's California Adventure this weekend were handed a slip of paper inviting them to try the "Disney TXT" service. By sending a text message from their cell phones to the number provided, visitors registered to receive up to 8 text messages during their DCA visit. MousePlanet staff member Jeff Moxley tested the system this weekend, and reported on the types of messages he received.

Here are the messages I received throughout the day after signing up for
the Disney text messaging service.

Message #1 (1:40pm):
Welcome to DisneyTXT! We'll send a max of 8 messages 2day, with news &
GR8 offers! U can stop receiving messages at any time by replying STOP.
Enjoy your visit!

Message #2 (1:40pm):
DisneyTXT: We can send more relevant info if we know the age of the
youngest person with U. Reply with their age. E.g if the youngest person
is 6, just reply 6.

Message #3 (1:44pm after replying 6):
DisneyTXT: Thanks for replying with an age. You will now receive park
tips throughout today based off the age you have provided. Enjoy!

I then went back and replied to the age request again with 30 and
received message #3 again (2:43pm). I then received the following
message twice.

With the age change and the duplicate message that was a total of 8
messages received, as promised.

The next day, Jeff received an offer for 10% off a purchase at Pizza Oom Mow Mow, "priority seating" for "It's Tough to Be a Bug," and "priority viewing" for Disney's Electrical Parade.

The new faces of Disneyland

In a ceremony last week, Andrae Rivas and Rebecca Phelps were named as the 2005 Disneyland Resort Ambassadors. Rivas and Phelps are the first Ambassador team to serve since 2000-2001, when Doina Roman-Osborn and Heri “Eddie” Garcia served 18-month terms during the grand opening of Disney's California Adventure. The pair begins training in their new duties by the end of the month, and officially take over from current Ambassador Becky Murphy on Jan. 1, 2005. 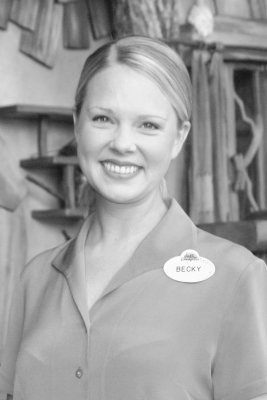 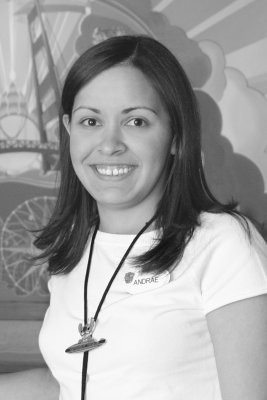 The Ambassador Program was founded in 1965, during Disneyland's 10-year celebration. Walt Disney discovered that he needed someone to help represent Disneyland when he could not attend an event. Julie Reihm was selected to represent Disneyland at anniversary ceremonies, and as a hostess to escort VIPs around Walt's Magic Kingdom. For more information about the Ambassador program, read our coverage of the 2002 Ambassador ceremony (link). 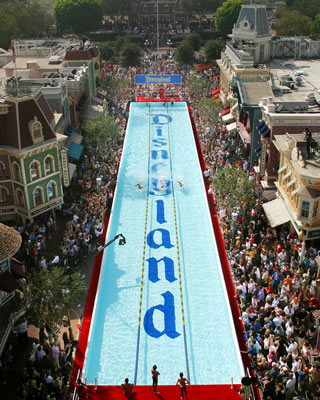 Six-time Olympic gold medalist Michael Phelps makes a splash on Main Street, Disneyland, together with Olympic champions Lenny Krayzelburg and Ian Crocker. The three gold medalists competed in a relay-race with school children in a full length Olympic pool built especially for the event in less than 24 hours! Photo by Scott Brinegar/Disney.

December 1 through 18, Disneyland resort passholders can purchase 1-day park hopper tickets for the same price as a 1-day, 1-park ticket. Limit 5 tickets per person, per day, with valid passport. Admission must be used on day of purchase.

...In last week's update, we forgot to mention the Dining Patch program for Fall 2004. As part of the Haunted Mansion Holiday theme, the French Market and Cafe Orleans are distributing a series of 13 fabric patches with each $25 purchase at the restaurant. The patches are released each Sunday through the duration of the overlay. Note: the Disneyland Web site says that the required purchase is $20. 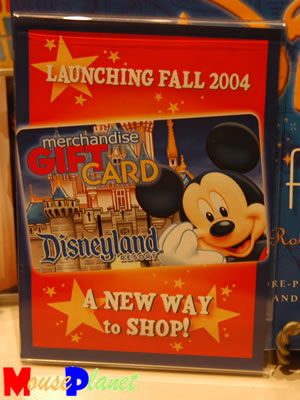 Disneyland's new gift card program may make it easier to stuff the stocking of your favorite Disneyland fan. Photo by Adrienne Vincent-Phoenix

…The Disneyland Resort is introducing merchandise gift cards in November. The cards work just like regular store gift cards, and can be used at merchandise locations around the resort. At least initially, the card will not be valid at food locations, or for hotel accommodations. Cards are available from $5 - $1500, and can be recharged. 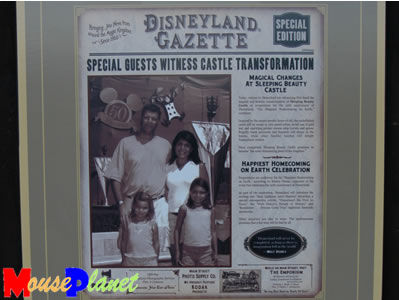 The Disneyland Gazette frame gives people a way to display the collection of blue tarp photos from their vacation. Photo by Adrienne Vincent-Phoenix

…In an effort to boost sagging photo sales, Disneyland has created a special “Disneyland Gazette” frame for photos taken in front of the castle. The “headline” on the Gazette reads, “Special Guests Witness Castle Transformation,” presumably to explain why the folks in the photo are posing in front of a blue tarp. The Disneyland Web site has been updated with a photo of the castle in its current state, so visitors know what to expect when they arrive. 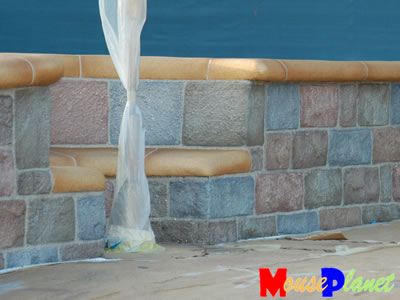 A sample of the new color scheme being applied to the castle. Photo by Adrienne Vincent-Phoenix

...The Disneyland Web site and winter Passholder newsletter have a few new offers for Disneyland Annual passholders and the general public. 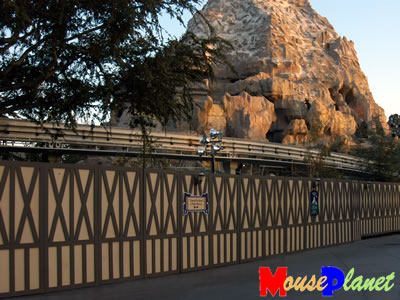 The pathway in front of the Matterhorn into Tomorrowland is completely blocked off. Photo by Adrienne Vincent-Phoenix. 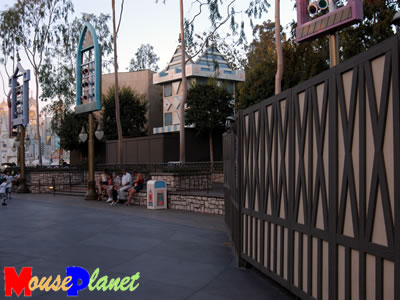 Construction fences continue down towards “it's a small world,” obstructing the view of Fantasia Gardens. Photo by Adrienne Vincent-Phoenix 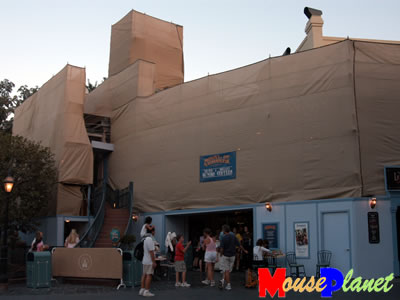 The Disney Gallery and surrounding stores are the next recipients of the rolling refurbishment. Photo by Adrienne Vincent-Phoenix 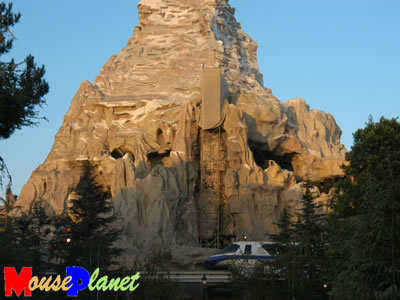 Construction continues on the Matterhorn. Photo by Adrienne Vincent-Phoenix. 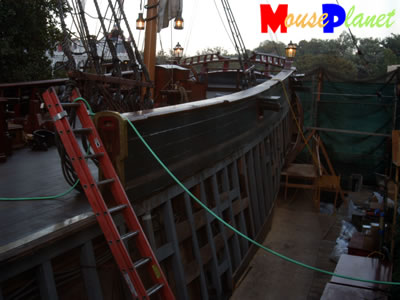