Cary Sharp, a 37-year-old doctor and health care attorney from Baton Rouge, La., has won the coveted spot as the honorary 1,000th resident of Disneyland's Haunted Mansion. Sharp will receive a tombstone in the ride's graveyard scene, personalized with his first name, and a “humorous epitaph (inspired by his interests or hobbies) written and personalized by the team at Walt Disney Imagineering.” Sharp and his fiancee, Debbie Dubler, 36, of Metairie, La., will also be the “ghosts of honor” at a midnight “wake” and “burial” ceremony on Thursday, October 28, officially placing the tombstone in the graveyard of the Haunted Mansion. 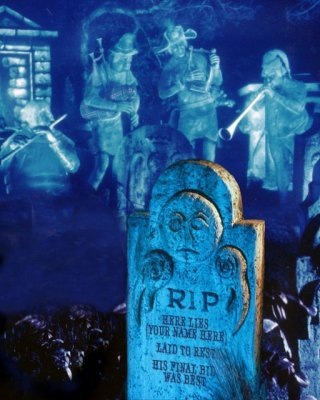 After collecting $37,400 for a Haunted Mansion tombstone, what "guest tribute" opportunity will Disney offer next? Photo © Disney.

Proceeds from the auction benefit the Boys and Girls Club. Fifty percent of the high bid will be donated to the Anaheim, CA club, the other half donated to the club in Sharp's hometown. “We could not be more thrilled by the response to this wonderfully inventive charity auction,” said Michael Baker, Executive Director of Boys & Girls Clubs. “The proceeds from this auction will benefit select chapters nationwide and we congratulate the lucky winner and thank them for their generosity.”

Sharp, who has visited Disneyland twice before, was stunned to learn he had achieved the top bid. "To be honest, I thought I would be outbid, but I enjoy Disney and this is for charity. It's a historic first and it's for a worthy cause," Sharp said. "I initially put in a bid of $35,000 as a joke, to give my buddies something to tease me about, but I went back to the auction about five minutes before it closed, and I was ready to bid a little more to win. I was ecstatic when I came out on top."

MousePlanet staff member Frank Anzalone interviewed Imagineer Jason Surrell about the auction on Thursday morning. Surrell, who is a noted Haunted Mansion expert, said “Disney originally thought this might generate somewhere between $5,000 to $7,000… this auction even exceeded Disney's expectations.” However, there was not last-minute “bidding frenzy” as some had anticipated. Although the auction began with bang, opening at $750 and reaching nearly $35,000 just 48 hours later, the bidding stalled early in the week. The winning $37,400 bid was placed at 9:16 on Wednesday night, and went unchallenged by the time the auction ended on Thursday afternoon. Over 60,000 people viewed the auction during the seven-day listing. The price was the highest-ever for a piece of Disneyland-related memorabilia, topping the $30,700 that actor John Stamos spent on the letters from the Disneyland marquee in 2001.

Disneyland workers have removed another layer of scaffolding to reveal more of Sleeping Beauty Castle. Sadly, photos really do not do the amazing new finish justice—you really need to see it in person. 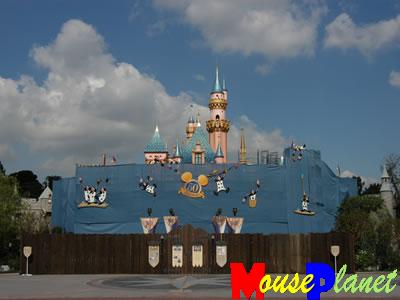 Row by row, the scaffolding is removed to reveal the newly refinished castle. Photo by Adrienne Vincent-Phoenix. 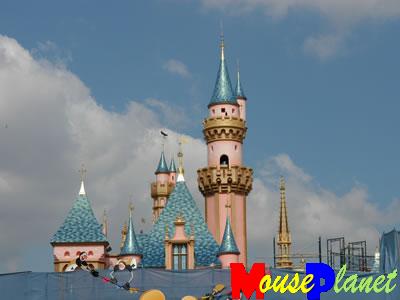 The gold leaf sparkles in the sunlight. Photo by Adrienne Vincent-Phoenix. 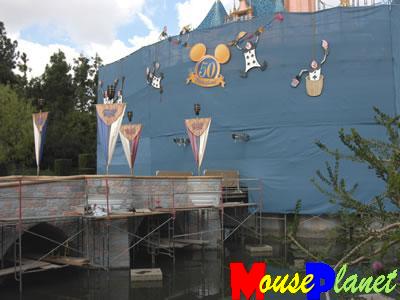 Workers paint the exterior of the bridge. Photo by Adrienne Vincent-Phoenix. 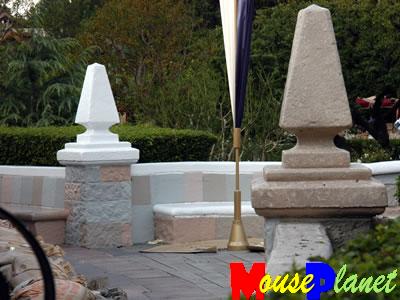 A pillar gets a primer coat before the golden paint is applied. Photo by Adrienne Vincent-Phoenix. 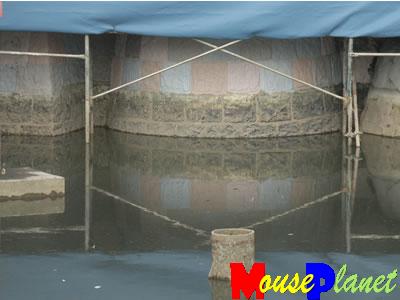 The water in the moat has been partially drained to allow workers to reach the lower bricks. Photo by Adrienne Vincent-Phoenix.

Disneyland is currently running an advertising campaign featuring the Hitchhiking Ghosts from the Haunted Mansion. Evicted from the Mansion during the Nightmare Before Christmas overlay, the trio are now on a sort of ghost walk.

The ghosts appear on billboards around Southern California, and the actual characters were spotted hitchhiking around Los Angeles last week in a series of promotional appearances. The campaign also features a television commercial promoting the Park Hopper pass. The spot invites you to “haunt both parks,” and shows denizens of the Haunted Mansion riding the Tower of Terror and splashing down the Matterhorn. The commercials end with a witty jab, as the ghosts ride through “it's a small world,” and scream in terror at the attraction theme song.

As clever as the spot is, it's also very misleading. “it's a small world” is closed through November 4 as Disney installs the annual holiday overlay. The Matterhorn Bobsleds are closed through November 23. As cute as the commercial is, there is no reason to mislead future visitors by showing them images of two closed E-ticket attractions. 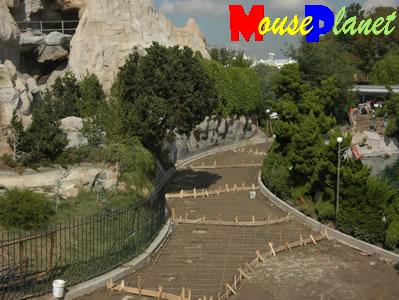 While the Matterhorn is under construction, the surrounding walkways are repaired. Photo by Adrienne Vincent-Phoenix.

Photos from the Future

As the Imagineers keep working on a potential Submarine Voyage replacement, the Lagoon is becoming a crowded place. The Neptune is still parked at the dock, and divers were spotted climbing down into the lagoon last week. All the activity is attracting the attention of park visitors, and nearby Monorail cast members have been heard telling guests that a new ride will replace the Submarine Voyage in 2006. 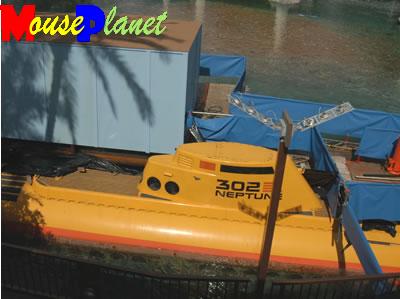 The Neptune sits in the Submarine Lagoon, drawing the attention of park visitors. Photo by Adrienne Vincent-Phoenix. 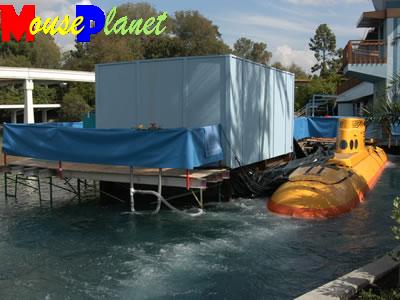 The blue box is said to conceal an experimental show element. Photo by Adrienne Vincent-Phoenix. 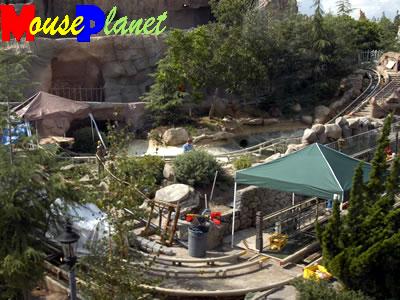 Construction continues on the Matterhorn Bobsleds. Photo by Adrienne Vincent-Phoenix.