Be sure to check back frequently with MousePlanet starting this Wednesday morning. We will have a small army at Disneyland on May 3, 4, and 5 and we'll all be working to bring you continuous “blog” type coverage, including news, images, video, and links of interest as the various events unfold. Coverage will begin Wednesday morning with a recap of the press activities on Tuesday night and then won't stop until Disney does. Or, you can get it all in digest form in this space next Monday when we will distill it all down. 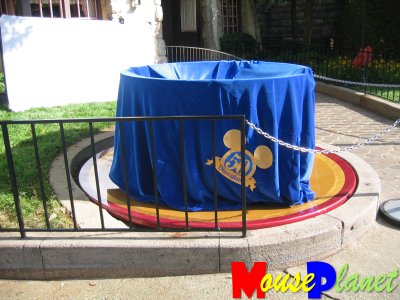 The golden teacup remains under wraps. Photo by Sheila Hagen. 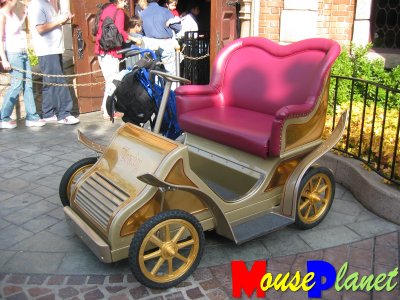 Meanwhile the golden Mr. Toad vehicle is out to see. Photo by Sheila Hagen.

Park watchers should be prepared for a relatively rare site this week as it should be expected that Disney's California Adventure park is going to be pretty crowded. The park is to extend its hours on Wednesday and Thursday (that is, until 9 p.m. rather than the normal weekday closing time of 6 p.m.).

With Disneyland closed on Wednesday for the big media events and celebrity party, DCA is the only option for most guests, though the first official performances of the Block Party Bash parade should keep people happy about not getting to see Spencer Breslin party down in Fantasyland. The crowds should continue on Thursday and into the weekend as some guests seek to escape the masses of people at Disneyland, or especially if Disneyland reaches capacity and guests face a choice of hitting DCA or just driving back home.

Expect huge locals crowd on at least Sunday, May 8, since this weekend is just like any other as far as annual pass blackout dates are concerned, and Sunday will be the first opportunity for many local pass holders to see the celebrations without missing work or ponying up for a ticket.

After the weekend, though, hours return to normal until the summer hours kick in the second weekend of June. 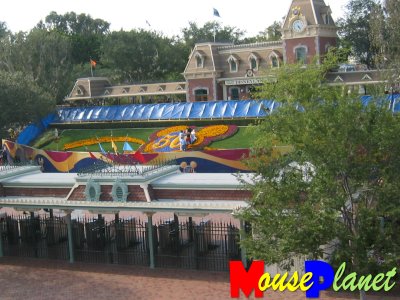 The new floral Mickey arrangement under the Main Street Station, a Mickey Mouse sculpture will greet visitors to the park. Photo by Sheila Hagen.

One of the most common questions we get these days: “Is it true that Disneyland closes when enough people are inside?” The validity of this concern was reinforced when representatives from Disney last week asked us to add a disclaimer to our announcement of the 50th Anniversary tour on just this issue.

Yes, once a certain number of people has entered Disneyland's gates, the park closes to further admissions. So on key dates, it is always a good idea to get into the park as early as possible to ensure entry, and don't leave the park without first ensuring you'll be able to reenter (usually, once you've made it in, you can leave and reenter without issue, but it is best to confirm this). Guests of Disney's three on–property hotels should be guaranteed entry, but you should confirm this as well before putting it to the test.

Note that entering Disney's California Adventure earlier in the day does not ensure later entry into Disneyland itself. 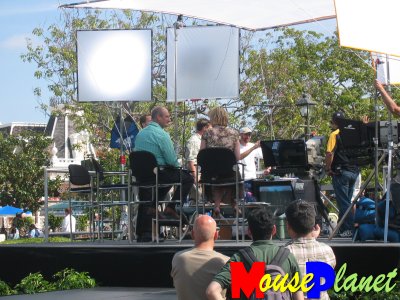 Tickets for Disneyland's new 50th Anniversary guided tour went on sale Wednesday, April 27, although this new tour may be one of the best-kept secrets of the celebration. The 3 1/2 hour tour is $55 and runs four times each day. Each tour accommodates up to 16 guests. Depending on the time of day, the tour includes the following elements:

Beware! If you have a reservation for a May 5 afternoon tour, you are strongly encouraged to enter the park earlier in the day to secure your admission into the park itself. If you can not get to your tour because Disneyland has reached capacity you may be offered an opportunity to attend a different day, or in rare cases a refund. 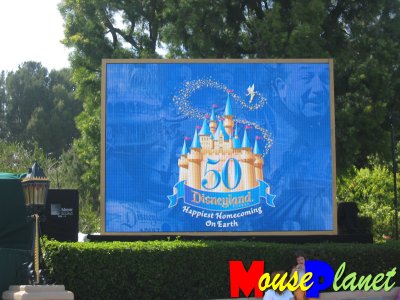 Before and after every MouseAdventure event, we receive a lot of email asking to purchase the game packet so some family can play when they visit the park. For various reasons we've resisted this, even though we love the idea of it.

We have finally changed our minds, at least on a trial basis. For $25 you can purchase your own copy of the Open Division game held on March 13, 2005. It has been edited slightly to remove things that could only be done in the context of the larger event, but remains mostly unchanged. As always, we must add this disclaimer: We do not guarantee that any particular puzzle will continue to work or make sense in the face of changes at Disneyland. Also, to solve the puzzles really requires being at the park; these are not things that can be done at home in your recliner while sitting by the fire. If interested, visit our MouseAdventure page (link) and click the purchase link. 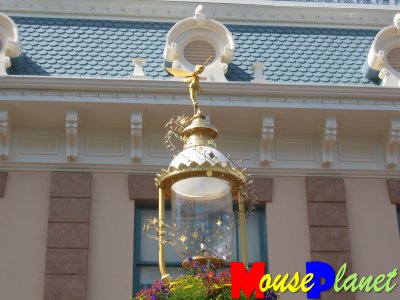 Tinker Belle tops have been added to several of the lamps on Main Street. Image ©Disney.

The Disney Gallery has put together a brochure of 50th Anniversary merchandise release dates and events (link). Pretty much every Disneyland fan is going to find something they want. On that page, cilck on the month of release to see images of the products. A selection of our favorites:

Stitch gets a Disney Dollar (well, a D$10 bill), along with such illustrious company as Mickey Mouse, Donald Duck, and Dumbo. Image ©Disney. 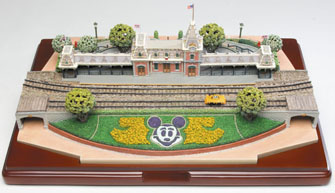 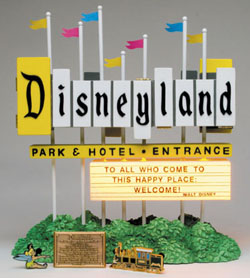 A replica of the gone—but not forgotten—Disneyland marquee. Image ©Disney. 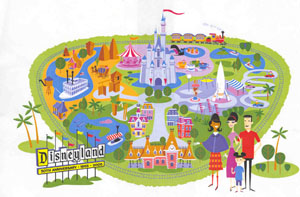 A Disneyland map by the artist Shag. Image ©Disney.

Work on the Ward Kimball locomotive, part of the Disneyland Railroad, has hit a bit of a snag that puts its availability for May 5 in question. Disney has discovered that the “trailing truck” (the four little wheels at the back of the engine, under the tender), does not have enough power in its springs to support the tender. [The truck was built by Disney as a replacement for No. 3 Fred Gurley. No. 3's tender weighs significantly less than the Ward Kimball's rather large tender.] Essentially, the suspension is “bottomed out.” Thanks, as awlays, goes to Steve DeGaetano for keeping us informed. Steve also reports that the Lilly Belle, while in sorry shape, does seem to be getting some attention back in the roundhouse.

Do you think it is official?

Though the “official” official announcement will be made on the evening of May 3 to the collected press, it is safe to say that it is now officially unofficial (an upgrade from the previous unofficially official) that long–shuttered SuperStar Limo in Disney's California Adventure park is being turned into a Monster, Inc., ride. 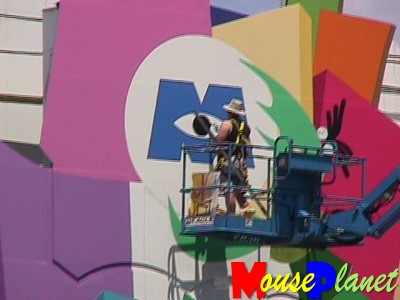 A Disney painter adds the Monsters, Inc., logo to the updated facade. Photo by Andrew Rich. 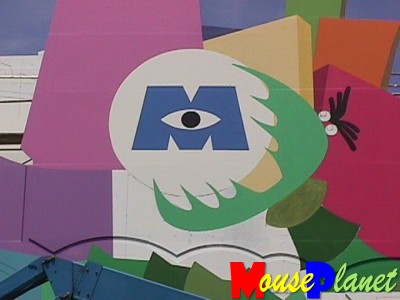 Amazingly, it appears that it took less than 24 hours for the six–CD limited edition A Musical History of Disneyland set, featuring a gold vinyl album reproduction of Walt Disney Takes You To Disneyland: A Musical Tour of the Magic Kingdom, the first every album released by Walt Disney Records, to sell out the 1,000 copies allocated to Disney Direct. If you were not one of the lucky 1,000, do not yet despair. Walt Disney World will have 1,000 copies to sell, and 3,000 copies are at Disneyland. Some copies have been leaking out at Disneyland, but there should still be many copies left when they officially go on sale on May 5. If the color of the vinyl doesn't matter to you, a “Special Edition” (the same recordings, but the vinyl is black instead of gold) is now available at Disney Direct (link) for the same price. The item number, for those ordering by phone, is #61589. An open edition (with no vinyl) will be available from retailers, starting in September, for the same list price as the Special Edition that is available from Disney.

Animation fans in the Los Angeles area may be interested in a free exhibit of animated–film poster art opening soon at the Academy of Motion Pictures Arts & Sciences gallery. Over 150 posters and lobby cards—just a fraction of the entire Cudequest Family Collection—covers everything from silent era up to modern day with The Incredibles.

The gallery is open Tuesday through Sunday and open to the general public for free. The exhibit opens May 13 and runs until August 21. See the official page (link) for full details.

Thanks to MousePlanet reader tod for bringing this to our attention. If you know of any events (particularly in the Los Angeles or Orlando area) that may be of particular interest to Disney fans, please send us an e–mail (link) so we can get the word out.

Ears to the ground...

…The castle shop in Fantasyland is now converted pretty much entirely to a 50th Anniversary merchandise location. 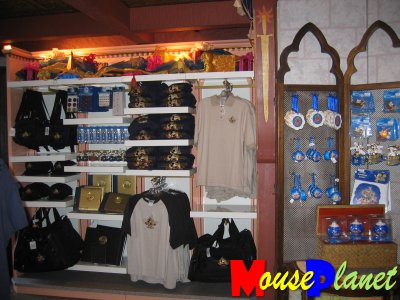 All 50th, all the time. Photo by Sheila Hagen.

…For the last few weeks we have listed a two-month closure of Pirates of the Caribbean later this year. While this is what we've heard, it should be empahsized that things are always somewhat speculative this far out. There are lots of rumors swirling about as to why such a lengthy closure would be necessary. For now we're leaving it on the list, but will update if any new information comes through.

Note: Disneyland is progressively refurbishing more and more attractions as the park readies for its 50th anniversary celebration in 2005. 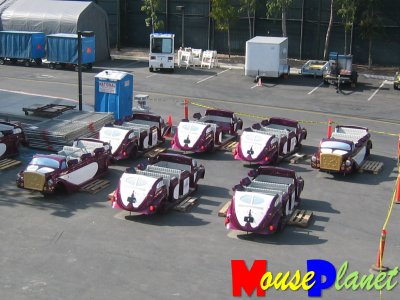 The SuperStar Limo ride vehicles have been removed from the attraction and are currently being stored backstage. Photo by Sheila Hagen.

The Happiest Homecomings on Earth package has been revised for the new year. The previous promotion was good only for three–night stays at the Disneyland Resort hotels; the new offer is valid on longer stays and includes Good Neighbor Hotels as well.

Instead of the 50th anniversary commemorative clock and Walk in Walt's Footsteps tour, the new packages include all the following:

The “Happiest Homecoming on Earth” package is available for arrival dates through December 31, 2005. The package can be booked through the Disneyland Web site (link), or by calling (714) 520–5060.

If you sign up online for ESPN Zone's MVP Club (link) you can receive a $20 voucher (for food, merchandise, or game cards), a 40–point game card (about $10 worth), and an ESPN Zone mini–cooler. ESPN Club in Orlando is excluded from this offer. You must pick up these items in person, although they do not have to be used as the same store from which you get them. There are some fairly strict requirements for registering and getting your rewards, so make sure you read the details carefully (link).