Ticket prices up, food prices down (for now)

As of last Friday, Disneyland annual passes were given a not-entirely-unexpected price increase. Except for the SoCal Annual Pass, which keeps the same price, all other passes get a $20 increase. The new prices are:

The free parking add-on (included with a premium annual pass) remains the same at $49.

Renew-by-mail forms that reflect the old prices will be honored at those prices, which means that including the $20 renewal discount would mean a $40 discount on current prices for most annual passes. Though other ticket prices rose earlier this year, it is the first price increase for annual passes since October 18 last year. The blanket $20 increase makes the Premium Annual Pass cheaper in relation to the Deluxe pass (the premium raises 6 percent while the Deluxe raises 9.5 percent), which is an interesting development for the school of thought that annual passes are too cheap. 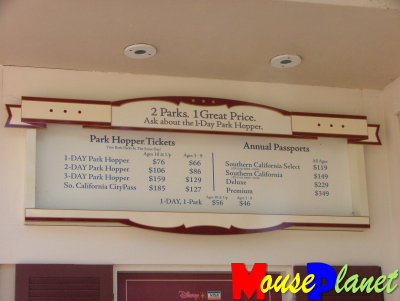 The new board at the ticket booths. Photo by David Michael.

Except for the psychological impact of the cheapest pass crossing $100, it doesn't seem likely they will drastically reduce total demand for annual passes.

Offsetting the price increase are new food discount policies for all annual passes. As of last Friday, all annual passes receive at least a 10-percent discount at almost every Disneyland, DCA, and on-property hotel dining location. Premium annual passport holders will receive a 15-percent discount. Excluded locations include Outdoor Vending carts, Club 33, and Napa Rose. The requirement that you spend $10 to qualify for the discount remains in effect (though reports conflict on how strongly this is enforced). Here is the list of all locations offering the new discounts.

Unfortunately, if you want to offset the pass price increase with increased food discounts, you will need to hurry. The word from several sources is that in October, food prices will go up almost completely across the board from Outdoor Vending carts to the full-service restaurants. While increases vary, they will mostly be within the 5-10% range.

The Bonanza Outfitters store in Frontierland has been turned into the Silver Spur Pin Store. The nearby pin cart is now selling Toy Story plush and other small souvenirs. Silver Spur Pin Stor joins Buzz Lightyear Store Command and the pin trading area in Plaza Gardens as the central location for all your pin needs.

Just days before Australian TV and radio stations said it would be happening, we are finally able to confirm, beyond any doubt, that there will be no ABC PrimeTime Weekend at Disney's California Adventure. As we previously reported, a promotion for Desperate Housewives in Australia was giving away trips to Disney's California Adventure on September 10 and 11 to attend the PrimeTime Weekend event and meet the stars of that show. Presumably, the contest winners will be meeting stars at some other location.

The Lion, The Witch, and the Millionaire

A new meet-and-greet will be installed in the former Who Wants to Be a Mllionaire show building later this year after The Chronicles of Narnia: The Lion, the Witch and the Wardrobe hits theaters on December 9. The current plan will have guests meeting the White Witch in her icy lair. The character will be a "face" character and not a full costume one. The White Witch will interact with guests but probably will not make any physical contact.

Coolest Ride in the Galaxy

Beginning October 1 and running through the end of the month, Honda will be running a promotional giveaway tying its 2006 Honda Civic to the reopening of Space Mountain. Full details have not yet been released, but one new 2006 Civic will be given away each day at a large set up in the Esplanade. Beyond knowing that each park visitor can receive one scratch-off entry each day as they enter the park, no further information about how it will work has been released (or how, other than in the graphic this is being tied to Space Mountain). A display will appear in the Esplanade on September 15 at which time full details wll be available. 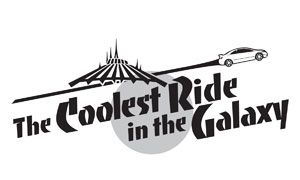 Work is slowly beginning on a "beautification project" for the Hollywood Pictures Backlot area of Disney's California Adventure in preparation for the opening of Mike and Sully to the Rescue in early 2006. The soundstage then will be minimized as area is turned into something more friendly on the eyes and less austere. 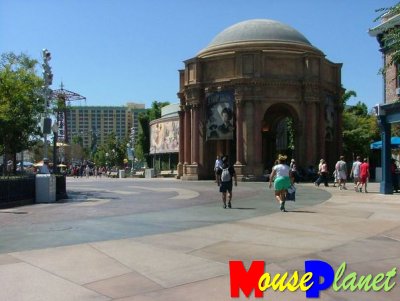 This photo, taken at 2:00 p.m. on a Sunday afternoon (of a three-day weekend, no less) demonstrates the attendance problems at Disney's California Adventure. Photo by David Michael.

Executives are proposing all kinds of ideas on how to help with the parks attendance, which continues to lag even lowered expectations, except for a short-lived blip in the afternoons when people cross the Esplanade from Disneyland to take in the highly rated Block Party Bash parade and then return to Disneyland.

Two new photo mosaics have been put up recently: One is for The Muppets' Wizard of Oz and the other is for Chicken Little. Unfortunately (or fortunately, if you don't approve of them using what is a nostalgic tribute as a promotional tool for upcoming efforts), they've been installed on the wall around Schmoozie's in Disney's California Adventure. These are not the first murals in that park as the Pixar films were already used for mosaics around Sunchine Plaza. 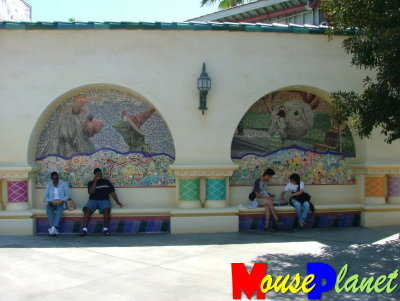 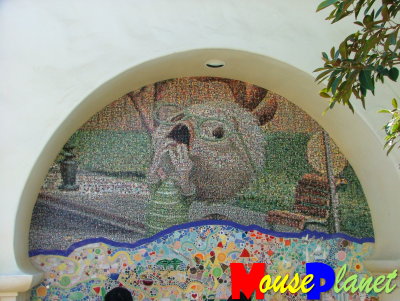 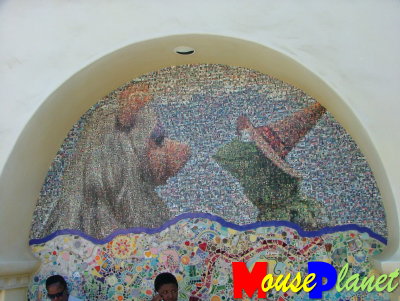 The Muppets' Wizard of Oz mosaic has Miss Piggy and Kermit the Frog. Photo by David Michael. 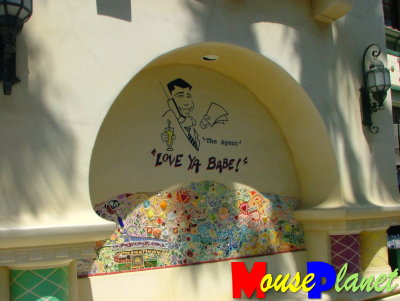 This photo shows the kind of thing that is normally in these two alcoves. Photo by David Michael.

We heard many people express concern that the Mickey's Halloween Treat tickets would sell out while still in the Annual Pass pre-purchase period. As of today, 10-days before the tickets go on sale to the general public on September 15, tickets are still available for all four scheduled dates.

Just a reminder that with Labor Day Weekend in the rear view mirror, many of the entertainment options at Disneyland resort are going into their off-season schedules.

Remember…Dreams Come True fireworks are now on a Friday and Saturday only schedule (still at 9:25 p.m.). The earlier plan to offer them on Sundays as well has apparently been scrapped. The only Sunday shows during the off-season will be on three-day weekends.
Parade of Dreams is now showing just once per day (at 7:00 p.m.) on Monday through Thursday. Friday through Sunday, both the afternoon and evening performances will be held (3:15 p.m and 7:00 p.m).
Snow White…An Enchanting Musical is now on hiatus and will not be shown at all during the off season. It is still expected to return for another run next summer before being retired for good, but that could always change before then.
Fantasmic is down to shows on Friday, Saturday, and Sunday with only one show on Sundays.
Disney's Electrical Parade is on hiatus for the off-season, though it will return for a short stint during the holidays.
Disney's Aladdin - A Musical Spectacular will not be shown on Mondays or Tuesdays.

Ears to the ground...

…There is some rumbling of a Fantasmic Special Edition for the long-running shows 15th season in 2007. The Entertainment Division is said to be bouncing around several interesting ideas. This could coincide with a remodelling of the French Market restaurant we also hear is on the drawing board for 2007.

…Rumors of a Cars-themed attraction continue to crop up. Though the latest one heard moves it from being a DCA E-ticket to being a retheming of Autopia at Disneyland when the Chevron sponsorship of that ride expires in 2008. The rumormill is still consistent in putting an Incredibles-themed flying roller coaster in part of what is now the Timon parking lot.

…Rumors also are also saying there is a Woody (from the Toy Story movies) dark ride on the drawing boards. It would theoretically go in the area behind Big Thunder Mountain Railroad and help fill the transition between Frontierland and Fantasyland. As all these rumors indicate it would be a good thing if other rumors about improvements in the relationship between Pixar and Disney are true.

…Research and development work is investigating a next generation of articulated character heads that would allow characters such as Mickey Mouse to move their mouths in scripted performances (such as parades).

…It is expected that the El Capitan Theater will be one of the limited number of theaters debuting the new Disney Digital 3-D technology when Chicken Little opens later this year. The new technology teams Disney with Dolby Digital and Industrial Light & Magic and reportedly creates a much better viewing experience and uses more comfortable glasses. The technology requires new digital projectors, which will be installed at 100 theaters in 25 markets for the film's release.

Get a fourth night free if you stay at any of the three Disneyland Resort hotels for three or more consecutive nights. Visits must happen through December 18, 2005 (link).

The Happiest Homecomings on Earth package has been revised for the new year. The previous promotion was good only for three–night stays at the Disneyland Resort hotels; the new offer is valid on longer stays and includes Good Neighbor Hotels as well.

Instead of the 50th anniversary commemorative clock and Walk in Walt's Footsteps tour, the new packages include all the following:

The “Happiest Homecoming on Earth” package is available for arrival dates through December 31, 2005. The package must be booked online through the Disneyland Web site (link) by December 28, 2005.

While supplies last if you make a $75 purchase at Downtown Disney's LEGO Imagination Center you will get one free child's Membership Pass to Legoland in San Diego, CA. The pass is good for children ages 3-12 and comes with unlimited park admission, special discounts, and a subscription to the Legoland Newsletter.

Holders of a Disney Visa card can get up to two free stroller rentals per day at the Disneyland Resort. This offer is valid through September 30, 2006 and you must present a valid Disney Visa card at time of rental.

If you sign up online for ESPN Zone's MVP Club (link), you can receive a 40–point game card (about $10 worth), and an ESPN Zone mini–cooler. ESPN Club in Orlando is excluded from this offer. You must pick up these items in person, although they do not have to be used as the same store from which you get them. There are some fairly strict requirements for registering and getting your rewards, so make sure you read the details carefully (link).