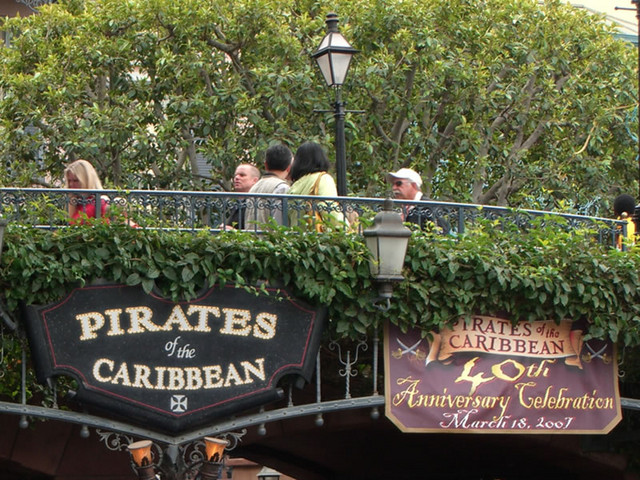 Disneyland celebrates its 40th anniversary of the Pirates of the Caribbean attraction with a special banner at the attraction's entrance. Photo by Adrienne Vincent-Phoenix.

Disneyland's Pirates of the Caribbean attraction celebrated its 40th anniversary this past Sunday. With the attraction's entrance festooned with a 40th Anniversary banner, cast members in the area handed out anniversary stickers to guests.

To commemorate the occasion, the park had a very low-key "product release and signing" in the Disney Gallery with such Disney Legends and Imagineers as X Atencio, Harriet Burns, Alice Davis, Blaine Gibson, and Bob Gurr. They were joined by many of the artists responsible for the commemorative merchandise. 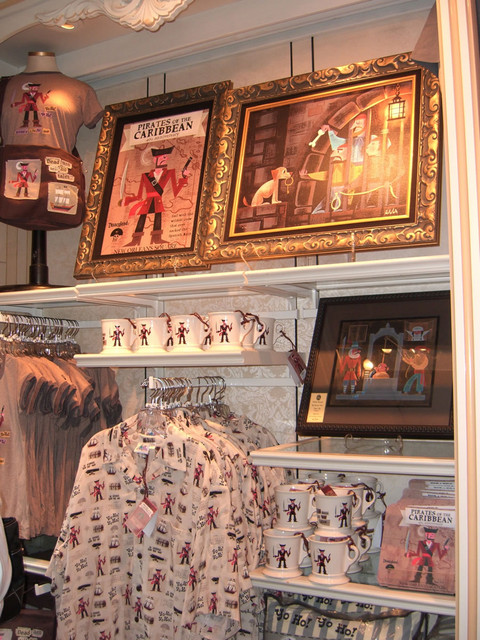 After the initial crush of shoppers snapped up the most limited of the limited edition merchandise at the Disney Gallery, the crowd dwindled considerably. By mid-afternoon, park visitors could pop into the Gallery, purchase a souvenir, have it signed by the artist and be back in their car in under an hour. 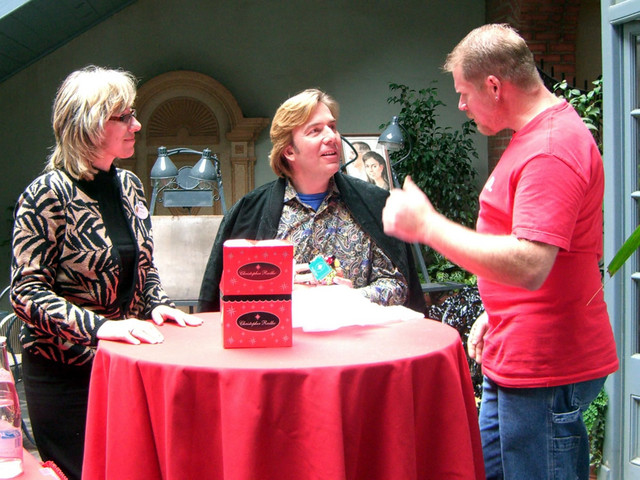 Very little of the event merchandise sold out, with the exception of the few one-of-a-kind pieces, so look for the remaining product to be offered at locations around the park this week. Silver Spur in Frontierland has already received the remaining event pins, and the Disneyana shop is likely to have the clothing and accessories by the end of the week.

Coming soon from the Olszewski Studios

Robert Olszewski's "Disneyland in Miniature" display at the Disney Gallery was updated this week, and several new accessory pieces were added to the ever-expanding model. During Sunday's Pirates event, artist Olszewski took the opportunity to showcase a new addition to the series as well as some new items in the works. 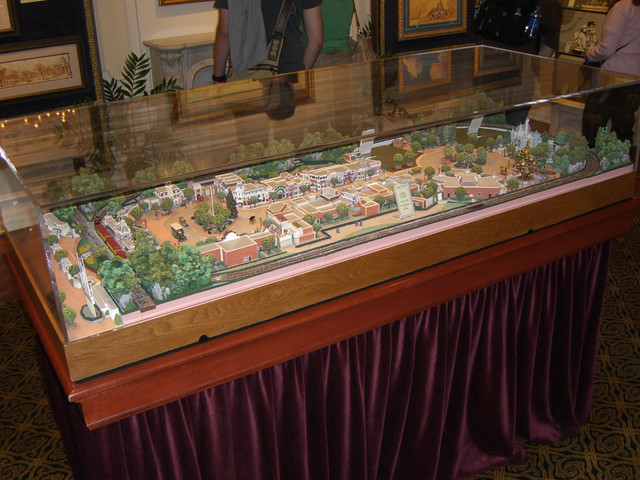 The Disneyland in Miniature display has been updated with new pieces and lots of new accessories. Photo by Adrienne Vincent-Phoenix.

Olszewski has just completed the Plaza Pavilion sculpture, though its release date has not been set. The sculpture will also include the Enchanted Tiki Room and Aladdin's Oasis, and is designed to fit with the existing Jungle Cruise sculpture. 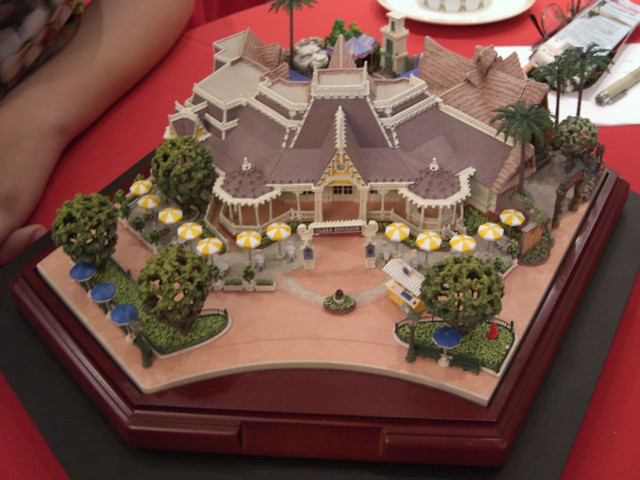 The Plaza Pavilion sculpture is expected to include the Tiki Room and Aladdin's Oasis. Photo by Adrienne Vincent-Phoenix.

The Gallery of Light sculpture created for the Pirates anniversary was actually the first in a planned series. Also on display were samples of sculptures based on The Nightmare Before Christmas, Beauty and the Beast and Cinderella. Olszewski is working on two new sculpted boxes, including a Tiki Room box, and plans to expand that series as well. 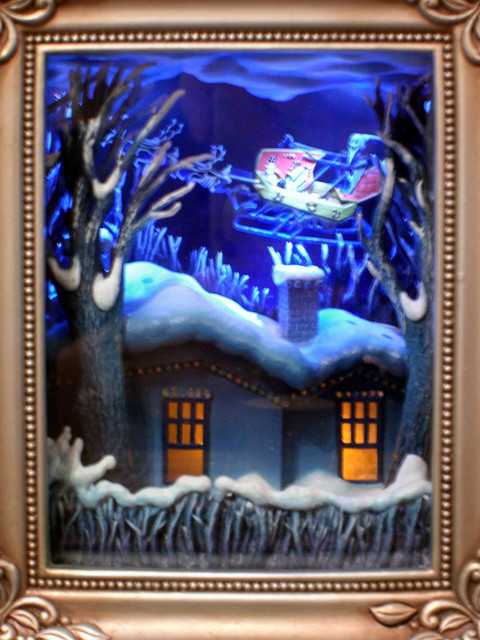 The Gallery of Light collection will be expanded to include new sculptures like this Nightmare Before Christmas piece. Photo by Adrienne Vincent-Phoenix.

...Arribas Brothers, which operates the crystal shop on Main Street as well as locations in New Orleans Square, Downtown Disney and at the Disneyland Hotel, no longer offers a 10 percent discount to Premium Annual Passholders. 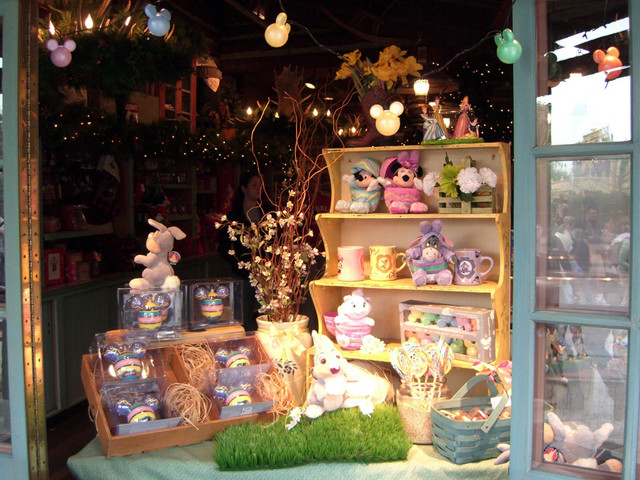 Easter merchandise has arrived at the Disneyland Resort, much of it with Walt Disney World logos instead of Disneyland. Photo by Adrienne Vincent-Phoenix.

...We've been remiss in not mentioning that the Lost Children center moved in to the Baby Care Center on Main Street last fall. The center's former location next to the First Aid Center on Main Street is now home to the Wish Lounge, a place where families who are visiting Disneyland through such wish-granting programs as the Make-a-Wish Foundation can take a break from their day and relax in a quiet environment.

...The Virtual Magic Kingdom Tomorrowland Quest was retired over the weekend, leaving only the in-park Animation and Pirates quests and the print-at-home High School Musical Quest available to Disneyland visitors. A series of new quests are expected to be released shortly. 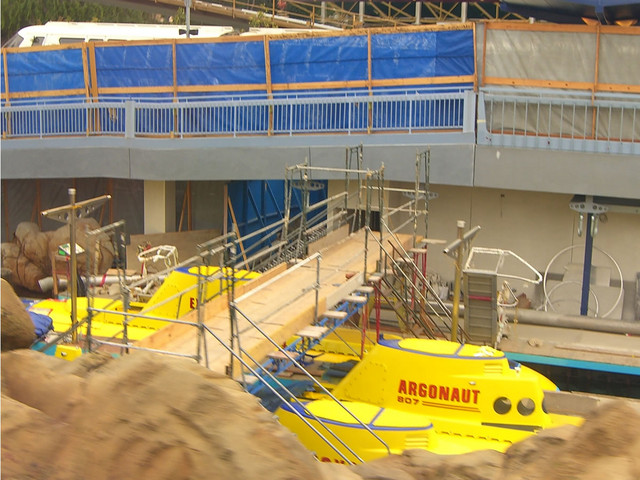 Work continues to get the Finding Nemo attraction open in time for the grand opening in early June. Photo by Adrienne Vincent-Phoenix.

...Our Spring 2007 MouseAdventure event sold out in a record six days. If your team missed the cutoff, we hope you can join us this fall. If you would like to receive an e-mail when registration opens for each event, please e-mail us to be added to the mailing list.

Keep in mind that each ticket booth has eight windows, though they may not always be open. In the following photo, there is a nice long line for the ticket booth on the right, but almost no line on the left. In fact, there is an open window with absolutely no line at all. The moral of the story: don't just join a line because everyone else did. 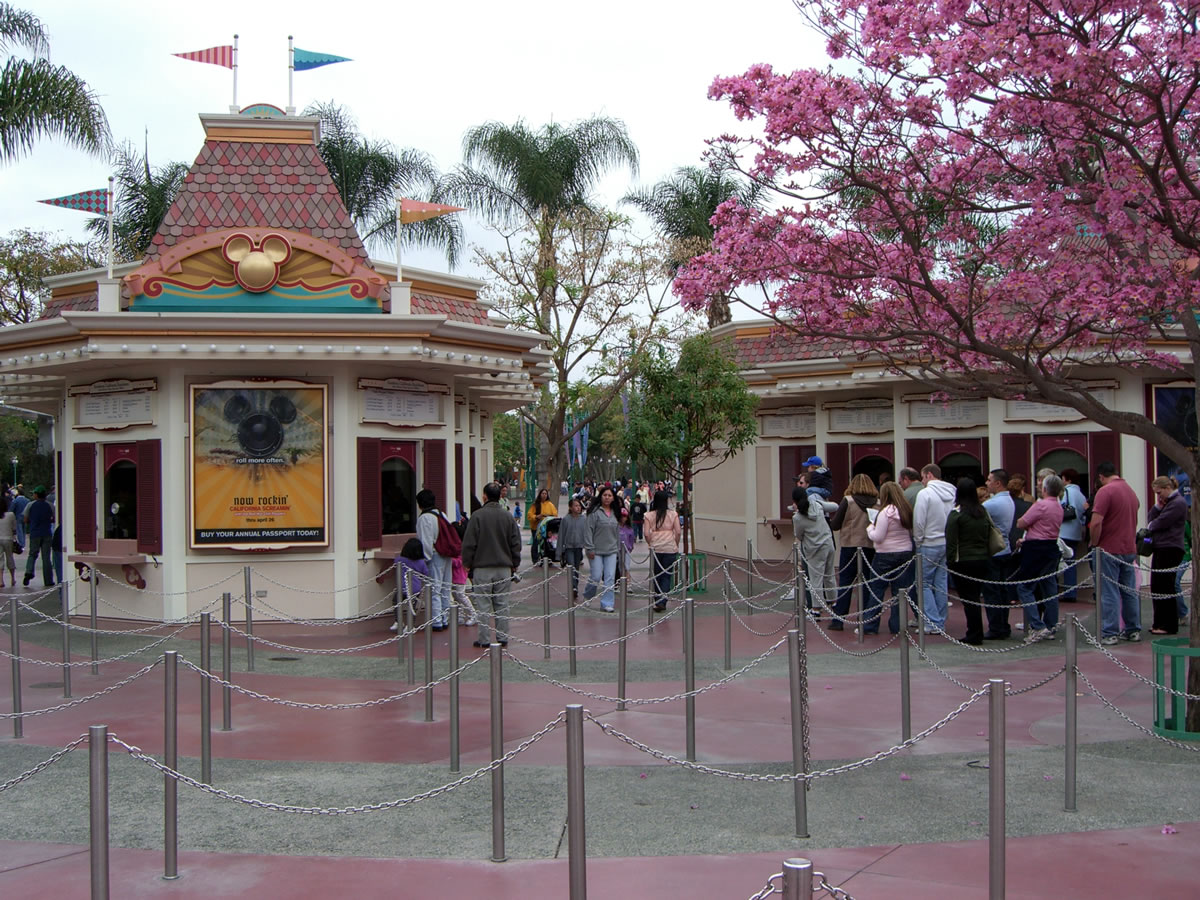 There line for the ticket booth on the right is long, and almost nonexistent on the left, while one open window has absolutely no line at all. Photo by Adrienne Vincent-Phoenix.

The same advice applies to lines throughout the park. It is not at all unusual to see 50 people waiting in a long line at one entrance turnstile, when there are open gates just a few feet away with no line at all. Restaurants like the Village Haus and Hungry Bear have two lines for each cashier, but some guests will only line up on the side where they see someone else in line. Some rides have queues that split at some point, and you have to decide which side to choose. Believe it or not, many people will just continue to follow the group in front of them, without even noticing that there is a split in the line. A Jungle Cruise skipper was heard making the following announcement this weekend: "There are two lines. One is completely full. The other is completely empty. Choose wisely." Amazingly, he had to repeat the announcement several times before the people in line got the hint and filled in the empty side.

Don't keep it to yourself! Send us your news tips, rumors, and comments. E-mail us here.

This information is pulled from many sources but much thanks must go to MousePlanet sponsor MouseSavers.com for providing the bulk of the information. If you know of any additional discounts, offers, promotions, or contests that should be listed in this section, drop us a line (link).

Costco Travel Packages – Many different travel packages including visits to Disneyland and Disneyland hotels are available through Costco.com. When purchasing a Costco Disneyland travel package extras that will be included are: Mickey's Toontown Madness admission (currently available Mondays, Wednesday, Fridays, and Saturdays), a character breakfast per person, a $20 Disneyland Resort gift card, a collectible pin and lanyard, and a Costco luggage tag.

Annual Passholder Discounts at the Disneyland Resort Hotels – The Annual Passholder section of the Disneyland.com Web site (click here, registration required) has details about the current AP rates for the three Disneyland Resort hotels. The offer advertises rates as low as $129 per night (plus resort fees and taxes) at the Paradise Pier hotel, and MousePlanet readers have reported rates as low as $189 per night at the Grand Californian Hotel.

The discounts are available for stays between January 28th and February 14th, and there is a limit of two rooms per Passholder. For reservations, call (714) 956-MICKEY and ask for rate plan "APD." It may pay to have a flexible schedule and a little patience - readers have reported that it may take a little time for the phone agent to locate the best discount for your stay.

Disney Visa Free-Stroller Rental – If you have a Disney Visa card you can rent up to two strollers for free at either Disneyland or Disney's California Adventure.

ESPNZone MVP Club – Membership in the MVP Club does not offer any discounts on food. However, once a member you can make an online reservation for your party up to three days in advance and will get a 25% increase in points purchased when playing games in the Sports Arena (and 40 bonus points at activation). You must register online and your membership card will then be mailed to you within 2-weeks. The card must then be activated at any ESPNZone by the person who signed up for the card and ID will be required (link)

Visit our Annual Passholders Blockout Dates 2006 page to see more dates. You can see future calendar schedules at Disneyland. As always, specifics are subject to change without notice (or occasionally, without us noticing) so when information conflicts between what is presented here and that presented by Disney, it is best to assume Disney's information is correct.