The holiday season officially begins at the Disneyland Resort today, with the finishing touches added all around the Resort this past week. The 60-foot-tall evergreen Disneyland Christmas tree was installed after the park closed Sunday night, with the garlands across Main Street added in the following days. Santa's Reindeer Round-up at Disneyland and Santa's Beach Blast at Disney's California Adventure are ready to greet visitors, and the first public performances of "A Christmas Fantasy" parade and Believe ... in Holiday Magic Fireworks Spectacular will take place this evening. If you can't make it to Disneyland this weekend to enjoy the start of the holiday season, these photos should hold you until next Monday's Disneyland Park Update. Click on any photo to see a larger version. 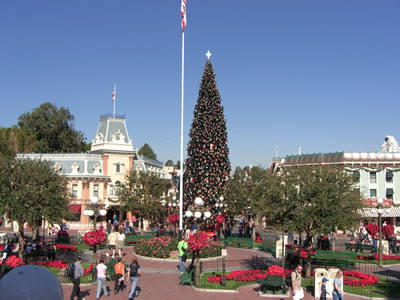 The 60-foot-tall evergreen Disneyland Christmas tree is in place on Main Street. Photo by Adrienne Vincent-Phoenix.

The final touches have been put on Sleeping Beauty's Winter Castle. Photo by Adrienne Vincent-Phoenix. 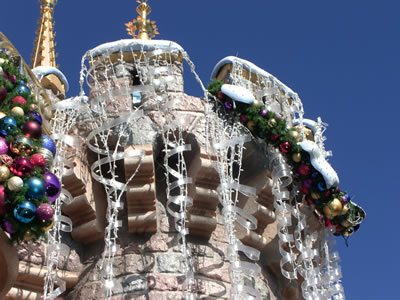 The centerpiece of this year's holiday celebration is Sleeping Beauty's Winter Castle. The snow and icicle decorations are beautiful by day, but are frankly stunning at night. Little has been said about the Castle courtyard shows that set the stage for the Believe ... in Holiday Magic fireworks, but crowds are sure to grow as word spreads. The first show will be shortly after dusk, the second about an hour before the fireworks. Each includes a bit of dialogue between a young child wishing for snow, and a grandmotherly figure who counsels that anything is possible if you believe enough. As the snow machines begin to blow across Main Street and the twinkling lights glitter on the Castle, a tune familiar to some Disney fans fills the night. Country singer Kellie Coffey has recorded a new version of the "Shine" theme from DCA's short-lived Luminaria show to accompany these little vignettes, with new lyrics to fit the show. Coffey also provides vocals for both the Believe ... in Holiday Magic fireworks theme and "White Christmas" at the end of the show. The actress who provides the "grandmother" voice in the new pre-shows also re-recorded the vocal introduction to the fireworks.

Each of the pre-shows is roughly 4 minutes long, and are best enjoyed from any Main Street location where you can see at least the top half of Sleeping Beauty Castle. A longer version of the light-and-music show will replace Believe ... in Holiday Magic on nights when the weather conditions force cancellation of the fireworks show, and will lead into the "White Christmas" theme. This is a neat way to ensure that a little bit of holiday magic can be had every night, even when the weather refuses to cooperate. 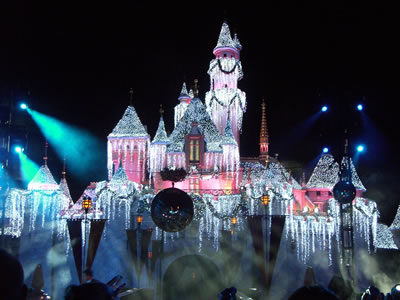 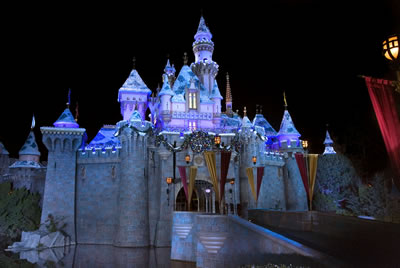 Dancing with the Stars visits Disneyland

The ABC television series Dancing with the Stars taped a segment for next week's semifinals episode Thursday afternoon. Actress Jennie Garth and dance partner Derek Hough were scheduled to perform, and fans began to fill the area in front of Sleeping Beauty Castle by late afternoon to catch a glimpse of the stars. Production assistants handed out pre-made posters with slogans like "Go Derek!" and "We love you Jennie!" to some audience members, and prompted the crowd to cheer while the cameras rolled. The crowd had begun to get a little restless waiting for the stars to appear when Jennie Garth finally took the stage, accompanied by Mickey Mouse. Garth explained that her dance partner Derek Hough had fallen ill and was unable to perform. Instead, Jennie partnered with Mickey Mouse for two takes of a dance set to the song "It Take Two," and then remained to pose for photos and sign autographs for fans.

The Disneyland segments will be featured in Monday's Dancing with the Stars episode. 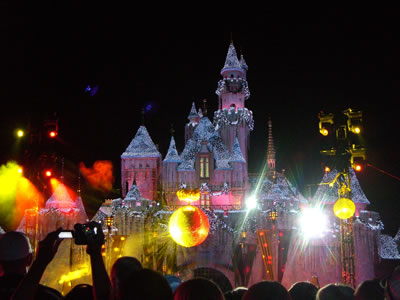 Sleeping Beauty's Winter Castle provides the backdrop for a taping of Dancing with the Stars. Photo by Adrienne Vincent-Phoenix. 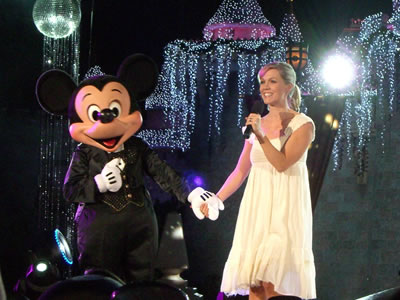 Mickey Mouse and actress Jennie Garth greet fans at a taping of Dancing with the Stars at Disneyland. Photo by Adrienne Vincent-Phoenix. 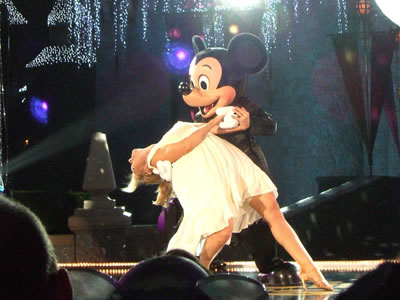 Mickey dips actress Jennie Garth during their Dancing with the Stars performance. Photo by Adrienne Vincent-Phoenix. 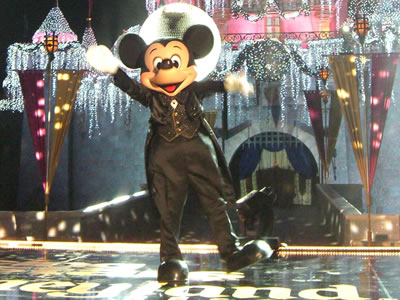