The Disneyland Resort has filed for a liquor license for Disneyland Park, and the required public notice posting seems to be causing some raised eyebrows. In fact, we're told this license is intended only to cover special events inside Disneyland, like movie premieres and private parties. Previously, they have just pulled a special permit for each event; now they will have a standing park-wide permit. Alcohol will not be sold during normal operating hours at Disneyland, with the usual exception of Club 33, so you won't be able to get a mimosa at River Belle Terrace when it reopens. 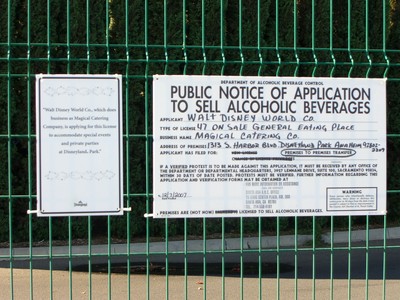 Don't be alarmed, this public notice posting is only a technicality. Photo by Adrienne Vincent-Phoenix.

Speaking of the River Belle Terrace—closed since August for a major remodel and scheduled to open this Friday—we are trying to find out if the reopening has been delayed but cannot get a straight answer. Based on these photos taken last Thursday, it's hard to see how the project can be completed in time, but we've been surprised before by Disney's round-the-clock deadline pushes. We'll know for sure next weekend. 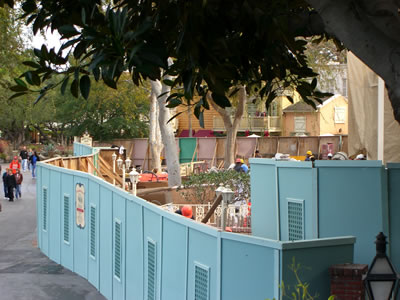 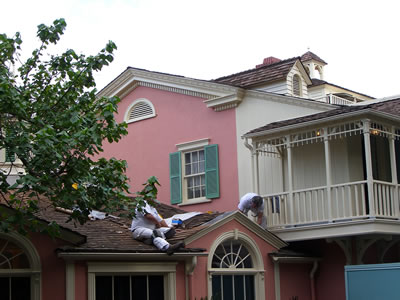 The Orange County Register reports (link) that Prospera Hotels last week turned in proposals to the city to build two hotels at GardenWalk. It's rumored that these hotels will be operated by Disney, but both Prospera and Disney declined to comment on this. The new hotels will both be 12 stories; one with 400 rooms, the other with 466.

Both the Los Angeles Times (link) and Orange County Register (link) noted this week that despite SunCal's letter to the Anaheim City Council dropping its interest in residential zoning in the Disneyland Resort, the developer isn't giving up after all. The earlier action was a result of of a property dispute between SunCal and the current owner of the property in question, and the City Council also removed the referendum on the issue that had been scheduled for the June 2008 ballot. The new request from SunCal claims the Council's decision violates federal and state housing laws by "denying affordable housing to low, very-low and moderate-income families and individuals."

Meanwhile, the citizen group started by SunCal announced their intention to gather signatures for a measure that would require voter approval of a Disney theme park in the current strawberry field on South Harbor Blvd.

Amtrak is offering a free companion fare coupon for rail travel on the Pacific Surfliner, the San Joaquin and the Capitol Corridor. Amtrak invites all active and retired military, military dependents and DOD employees to take a companion free on any of these three trains. Coupons are available at MWR Ticket Offices on San Diego naval bases. The Pacific Surfliner is the easiest way to go to Disneyland in Anaheim, or to Los Angeles or Santa Barbara for a getaway weekend. The free companion fare coupon is good for travel through June 2008. (link)

Legoland may offer pirate-themed camp-outs and also be able to get speedier approval for new attractions under a proposal approved by Carlsbad's city Planning Commission. The proposal, which now heads to the Carlsbad City Council for a vote, calls for a faster-track approval process for new rides within the park's core 35-acre interior; under current regulations adopted while the park was under construction in the late 1990s, any new ride must go through the city extensive public review process. Legoland is also now asking for permission for a campground program that could accommodate up to 275 people a night in 80 to 85 tents; the park isn't currently allowed to have overnight guests. Nightly camp-out sessions would mostly take place during the summer and would only be open to amusement park visitors, said park general manager John Jakobsen (link).

Michael Jordan, restaurant manager of Napa Rose at the Grand Californian Hotel, was recently awarded the coveted Master Sommelier title from the Court of Master Sommeliers. The distinction marks the highest recognition of wine, spirits, beverage service abilities and professionalism in the hospitality trade. If you'd like to see the examination Jordan had to ace for the Master Sommelier award, check it out on the CMS Web site (link).

Breakfast with Santa promotion at Naples Ristorante in Downtown Disney

Naples Ristorante at Downtown Disney presents "Breakfast with Santa" on Saturday, December 22, 2007 from 9:00 a.m. to 1:00 p.m. The $34.95 price includes a mimosa or glass of champagne ($15.95 for children 11 and under, but with no champagne). The breakfast menu includes an arugula salad with red wine-poached Bosc pears, caramelized pecans and Gorgonzola cheese, wood oven-roasted potatoes with bell peppers, garlic and Parmesan cheese, and a frittata station along with several other delectable-sounding choices (PDF link).

Catal, also owned and operated by Patina Group, is offering special Christmas Eve, Christmas Day (PDF link) and New Year's Eve (PDF link) dinner menus. Naples and Tortilla Jo's will also be open for Christmas Eve, Christmas Day and New Year's Eve for their regular hours (11:00 a.m. to 11:00 p.m.). Reservations for all of these events are available at the Patina Group's Web site (link) or by calling 866-9-PATINA (866-972-8462). 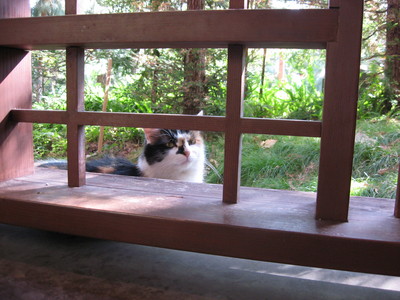 One of the many cats that live at the Disneyland Resort waits for bits of chicken outside White Water Snacks. Photo by Bill Allen. 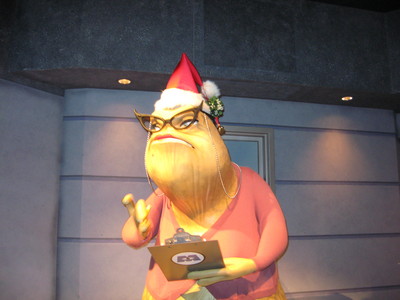 Before Monsters Inc: Mike & Sully to the Rescue closed for refurbishment, cranky office manager Roz got into the Christmas spirit. Photo by Bill Allen. 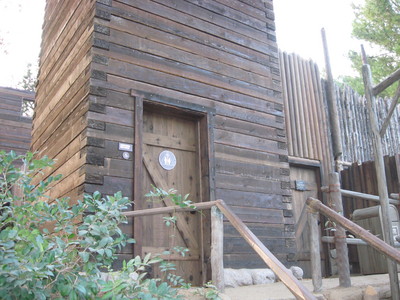 While construction inside Fort Wilderness continues, a new companion restroom has opened outside the fort. Photo by Bill Allen.

Several current promotions offer discounted admission to the Disneyland Resort. For convenience sake, we have grouped the discount offers based on the number of days the tickets are valid. Check out the category that best matches the amount of time you plan to spend at the resort, and pick the offer which works best for you. And keep those tips coming—let us know if you find a better or different offer, so we can share it with other readers!

This first section is a list of discounts on ticket only purchases. Though it has become more common in recent years, Disneyland tickets are rarely offered at deep discounts unless you are a resident of Southern California or Northern Mexico. For residents outside that area, the best discounts available tend to be simple advance purchase discounts.

This information is pulled from many sources but much thanks must go to MouseSavers.com for providing the bulk of the information. If you know of any additional discounts, offers, promotions, or contests that should be listed in this section, drop us a line (link).

Disney's 2007-2008 Wildfire Heroes Salute – The Disneyland Resort is offering Southern California firefighters, law enforcement and rescue workers a complimentary three-day Park Hopper ticket valid as part of the Disney's Wildfire Heroes Salute. The tickets are valid Tuesday, November 13, 2007 and are good through February 28, 2008, with the exception of block-out dates of November 22-25, 2007; December 8-9, 2007; December 25, 2007 to January 6, 2008; and February 15-17, 2008. Eligible emergency personnel may also purchase of up to five additional three-day Park Hopper tickets for $56 each, a substantial discount from the regular $189 cost.

Disney's Good Neighbor Dream Vacation Packages – This package is valid for arrivals June 29 - August 30, 2007, and starts at $214 per person. Package includes two nights at a Good Neighbor hotel; Park Hopper ticket (with admission to one Early Entry and/or one Toontown Morning Madness depending on ticket purchased and days visited); preferred seating at a DCA show; souvenir coin, luggage tag and lanyard with pin; a Downtown Disney Fun Card; and a "Character Call" from Mickey, Minnie or Goofy. (Sample pricing is for two adults and two children under 9 years-old sharing one room at the Jolly Roger Hotel, and includes a 3-day park hopper ticket per person. Other hotels and ticket combinations are available at a higher price) Reservations must be made by August 27, 2007. Call (866) 279-7165 for more information.

Fourth Night Free at Good Neighbor Hotels – This package is valid for arrivals September 2 to December 16, 2007, and starts at $257 per person. Package includes hotel accommodations; Park Hopper ticket; admission to one Early Entry and one Toontown Morning Madness; preferred seating at a DCA show; souvenir coin, luggage tag and lanyard with pin; a Downtown Disney Fun Card; and a "Character Call" from Mickey, Minnie or Goofy. (Sample pricing is for two adults and two children under 9 years-old sharing one room at the Best Western Pavilions, and includes a 3-day park hopper ticket per person. Other hotels and ticket combinations are available at a higher price) Reservations must be made by December 13, 2007. Call (866) 279-7165 for more information.

Fourth Night Free at Disneyland Resort Hotels – This package is valid for arrivals August 19 to December 12, 2007, and starts at $345 per person. Package includes hotel accommodating; Park Hopper ticket; admission to one Early Entry and one Toontown Morning Madness; preferred seating at a DCA show; souvenir coin, luggage tag and lanyard with pin; a Downtown Disney Fun Card; and a "Character Call" from Mickey, Minnie or Goofy. (Sample pricing is for two adults and two children under 9 years-old sharing one room at the Disneyland Hotel, and includes a 3-day park hopper ticket per person. Other hotels and ticket combinations are available.) Reservations must be made by November 12, 2007. Call (866) 279-7165 for more information.

2008 "2 Days Free" offer – When you buy a 3-, 4- or 5-day Parkhopper ticket, Disney will add two free days. In other words, you'll pay the 3-day rate ($189) and receive a Parkhopper Bonus ticket good for five days. You can maximize your savings by taking advantage of the advance purchase discount, and pay just $169. The Parkhopper Bonus ticket includes one Early Entry admission. The Spring promotion is available starting January 7. The ticket must be used for the first time on or before April 24 and expires 13 days after first use or on May 7, 2008, whichever occurs first.

Disney Visa Free-Stroller Rental – If you have a Disney Visa card you can rent up to two strollers for free at either Disneyland or Disney's California Adventure.