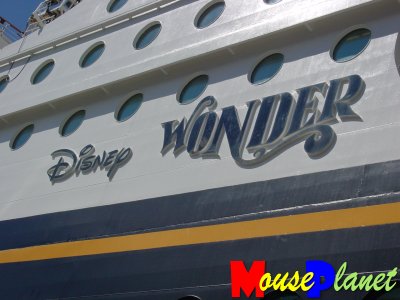 When it comes to cruising, one common topic for debate is the length of the ideal cruise. Some people who are cruising for the first time may think a three-day or four-day cruise is best, just in case they find they get seasick or dislike cruising for some other reason. Cost can also be a factor, as the shorter cruises cost less than longer trips.

From my experience, more experienced cruisers tend to prefer cruises of seven days or longer. My first cruise was a seven day and for years after Disney began sailing three- and four-day cruises to the Bahamas I was the first to say I was not interested in those "faux" cruises. For me it did not feel like a "real" cruise unless it was seven days and included all of the traditional cruise events (formal nights, days at sea). I particularly questioned the wisdom of taking the three-day cruise, which really only gives passengers two full days on the ship. It seemed like more trouble than it would be worth to pack and travel to the port for only two days.

After doing the four-day cruise years ago when several friends were also on board, and the Disney Vacation Club (DVC) members-only four-day cruise in 2003, I decided to finally try the shorter three-day sailing. What finally made the difference was shifting my attitude to view the trip as a relaxing weekend on a resort, rather than a cruise. This was not hard to do, considering the ship remains docked all day and most of one evening on these sailings, so there is very little cruising happening when people are awake to appreciate it. A friend who had never cruised came along with me, which was nice because everything was new and exciting to her.

A relaxing weekend to me meant lounging by the pool, cleaning up for a nice dinner and seeing a show. The Disney Wonder served as my resort and provided exactly what I was looking for. Although the ship spends a long day in Nassau, going ashore is anything but relaxing! Gamblers may love visiting the Atlantis Resort, and there are a variety of other shore excursions, but my top choice is staying on board to enjoy the ship while most of the other passengers are away. Castaway Cay is where the ship is docked on the other full day, and beach lovers will find this day to be the highlight of the cruise. It is a beautiful island, and although it can get awfully crowded, it is worth spending at least part of the day ashore.

I booked the three-day sailing leaving the week of Labor Day 2003. We were a party of two adults traveling without any children, and preferring to limit our contact with anyone else's children. It just so happened a private group had booked over half the cabins on this cruise, yet they never made the rest of us feel as if we had intruded into a private party. Other than seeing them all wearing matching T-shirts and hearing about a designated group photo time for them, we would not have known they were even on board as a group.

Since the cruise was so short we wanted to maximize the time we had on the ship, so we arrived at the terminal in time to board at noon. Disney has the entire check-in process down pat, and cast members are there to direct everyone and keep things moving.

It is very important to complete filling out the travel documents prior to arriving, and do not try to bring any items that could be deemed dangerous on board in your carry-on luggage. Pack them in your checked luggage or simply buy the items on the ship (I know, this makes no sense—although you can't carry certain items on the ship you are allowed to have them once you are on board).

We had hoped to drop our carry-on bags off in the cabin before going to lunch, but Disney now has the hallways roped off until approximately 1:30 p.m. Anyone arriving for noon embarking would be better off carrying on as little as possible! Being on the ship so early was a wonderful start to the weekend, and for hours we hardly ever saw another person as we explored the ship. We spent the day walking around the ship, grabbed a bite to eat from one of the buffets, booked a dinner at the adult-only restaurant (Palo) and even had time to unpack before reporting for the mandatory lifeboat drill. 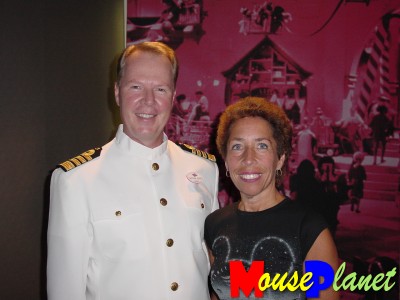 Disney generally groups adult parties with others who are not traveling with children. This has worked very well on my previous Disney cruises, but this time I requested a specific dining rotation in order to be scheduled for the menu we chose to skip the night the ship was in Nassau—the night we'd eat at Palo. By doing so, we inadvertently joined the family rotation and had three children at our table. The first night the families kept to themselves with no real interaction, the second night we ate at Palo, and on the third night one family was missing but the other (single dad with two sons) was more talkative. This seating arrangement would have been unacceptable on a longer cruise, as dinner can be the social highlight of the day, but on this short cruise it was less of a problem. I certainly will not request a different rotation again—Disney knows what they are doing grouping people together.

The Walt Disney Theatre is home to the main show presented each evening.

Following dinner we enjoyed the main show presented on two evenings. People who have early seating see the show after dinner, while those who have late seating attend the show before eating. On most other lines passengers see the show after their dinnertime, whether they eat early or late. It does seem odd to attend a show before dinner! The shows on the Disney ships are typical production numbers based upon the Disney characters. Costumes are elaborate, the sets are nice, and the entertainment is appropriate for youngsters as well. We chose to see Disney Dreams and the new Golden Mickeys show, but skipped Hercules the Muse-ical. While Disney Dreams has always been a bit too saccharine for me, I thoroughly enjoyed Golden Mickeys. 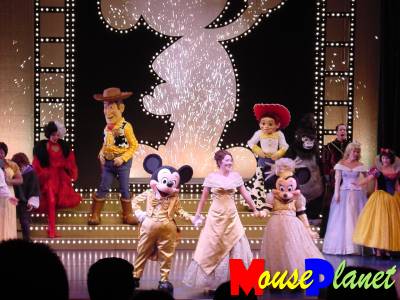 Scene from the end of Golden Mickeys show.

During the daytime hours we spent time doing things we would have done at any resort. I attended a fitness class where nobody else showed up, so the instructor worked with me as a personal trainer at no charge for the half-hour!

Breakfast was eaten out on deck, enjoying the sunshine. Watching the ship come into port and get tied up at the dock is always enjoyable, no matter which ship I am on or how many times I have watched it before. Reading a book while relaxing on a lounge chair was a great way to spend some time, even though I had to retreat under cover during a rain shower. By the time we needed to get ready for dinner that night, it had been a wonderfully relaxing day. 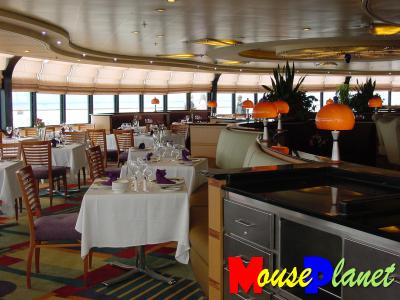 Palo, the adult-only restaurant on both the Wonder and Magic.

We chose the night in Nassau to dine at Palo, figuring the lights from the island would be pretty. Palo has an extra fee of $5 per person, and people generally add a tip on top of that. Nobody under 18 is allowed, and although it can be a great spot for a romantic dinner, it is equally as appropriate for friends or larger groups who are not looking for romance. The service here is more attentive, and the food quality surpasses what we found in the regular restaurants. The regular dinners were fine, but nothing special. Dinner at Palo was a significantly better experience, and well worth the small additional cost. 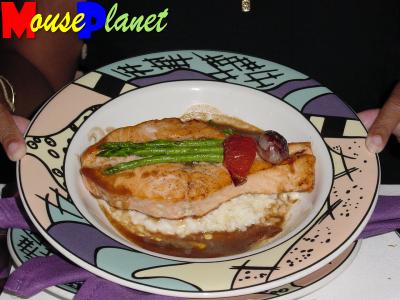 The presentation of the food is top-notch, and I was very impressed to receive a hand-written thank-you note from our server the next day. Reservations at Palo can be difficult to obtain on the shorter cruises because they can only accommodate a small portion of the passengers on board. It is very important to book it as soon after boarding the ship. People who miss out may get lucky if there is a cancellation, but the waiting list tends to be very long each night. The Palo manager told us people could come in and sit at the bar for dessert, hoping for a table to be free. There are no guarantees, however. 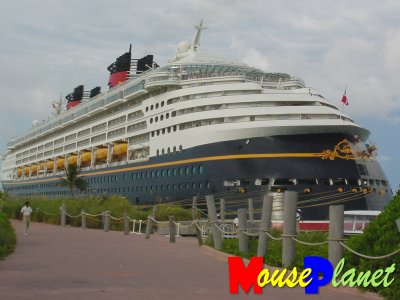 Our second full day was spent docked at Castaway Cay. We were off the ship bright and early, and found a perfect sunning spot at the far end of the family beach. Unfortunately, within an hour the sky had turned very dark and a rainstorm was moving in. We retreated to the ship in the rain, and it continued to rain all day until we sailed away. Disney frantically added activities on the ship, added more lunch locations, and made the best of a situation they were helpless to control. We spent most of the rest of the day lounging in chairs on Deck 4 reading and relaxing indoors. Despite the rain and missing the planned beach day, it was nice spending the day on the ship.

On the final day everyone has to leave the ship, and on a three-day cruise that morning comes way too quickly. We decided to skip our assigned breakfast time (6:45 a.m.—no thank you) and instead eat from the buffet up on deck around 8 a.m. I got up before sunrise and watched the luggage being unloaded from the ship and the new supplies being brought on board. I enjoy watching their preparations for the next lucky group of passengers! By 7:30 a.m. the lobby area was crowded with people waiting to disembark, which is a scene we made a point of avoiding. 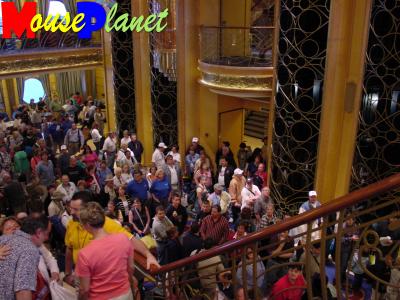 Waiting to be let off the ship.

The initial group of people waiting to get off the ship is one of the worst moments of the cruise. It is crowded, and generally very unpleasant. By opting for the buffet breakfast we missed that whole mess, and after eating walked off the ship with no wait or delay at all. Best of all, once we were in the terminal our luggage was easy to find because the huge crowds of people had already collected theirs and left.

Overall, the three-day cruise was a great weekend getaway, and something I would consider doing again. I still would not recommend it to a first-time cruiser, as I truly believe you do not get an accurate feel for cruising from these short little Bahamas trips. If the ship is your destination (as it was for me), then it makes more sense. However, if seeing the ports is the primary reason for cruising, I think the three-day will leave you running around without having spent much time on the ship at all, other than evenings.

If a three-day cruise is the only option besides not cruising at all, I would definitely recommend Disney. Other cruise lines tend to put their older, dumpier ships on the short itineraries, saving the newer and nicer ships for the seven-day sailings. In Disney's case they only have two ships, and both are extremely well maintained and very attractive. Even without children, on the short cruises I consider Disney to be worth the extra money in order to be assured of being on a ship that will make you say "wow"!