For years, the Marketplace at Downtown Disney was home to the Gourmet Pantry, which specialized in food-related merchandise as well as delicious candy, bakery goods and ready-made sandwiches. When it closed its doors many people were surprised, as the Pantry always appeared to be busy. After a partial renovation, a section of the building reopened as a candy store with a limited bakery counter. Following a much longer renovation, the rest of the building recently reopened as the Earl of Sandwich.

Like many other stores and restaurants at Downtown Disney, Earl of Sandwich is neither owned nor managed by Disney. It's a private company renting space from Disney and doing business on Disney property—similar to Rainforest Café, Cirque du Soleil and several others. I was told company plans call for several Earl of Sandwich locations, with the one at Walt Disney World being the first. Their Web site was not completed as this article was being written, but will eventually be found at EarlofSandwichUSA.com (link).

It's customary for Disney to have a story behind its attractions, resorts and eateries, and Earl of Sandwich has one also (with the advantage of being pretty much true). The following can be found on signs as well as the menu:

Earl of Sandwich is a counter-service restaurant, with both indoor and outdoor seating. Upon entering, the large menu is easily visible before queuing up to place an order. Customers order at one end of the line, then move toward the other end to pay for and later pick up their food.

The eatery has been become very popular, and with good reason—prices are low and the food is great! Because it is so popular though, showing up at mealtime means you may have a long wait—as much as an hour! 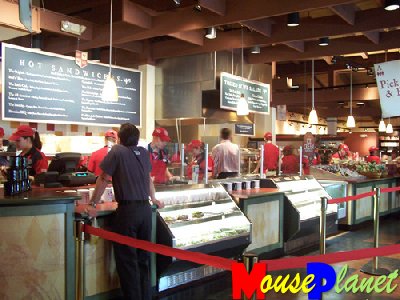 Customers order at the first station. Photo by Sue Holland.

During a recent visit, I found the queue completely filled in with enough additional people outside the rope to fill the queue halfway again. It had been less than half as busy the night before, and at that time it took more than 30 minutes to get my sandwich, so I'm confident the line on the second night was at least an hour long (I did not wait). Your best bet right now is to try eating between the traditional meal times if possible. 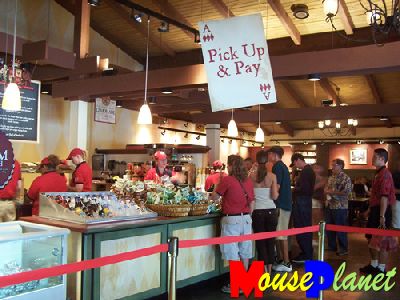 Customers pay for their order and return here to pick it up when their number is called. Photo by Sue Holland.

Earl of Sandwich makes its own hearth bread, which is used for all sandwiches. All of the hot sandwiches are run through a toasting/grilling machine, which leaves the bread crusty on the outside but warm and soft on the inside. Each sandwich is wrapped in foil and held closed with a gold logo seal, which helps preserve the warmth as well as giving a nice presentation.

All sandwiches are served “to go,” whether you are eating there or not. Each is made fresh after you place your order, for maximum flavor. The one that caught my eye was the caprese, which is sliced mozzarella, roma tomatoes, fresh basil and drizzled virgin olive oil. I've eaten this as a salad many times and it is one of my favorite food items. I had trouble imagining it warm, and as a sandwich, but it turned out to be delicious! The hot sandwiches (called Hotties) are all $4.95 plus tax, which is a very good value considering this is on Disney property. The other selections: 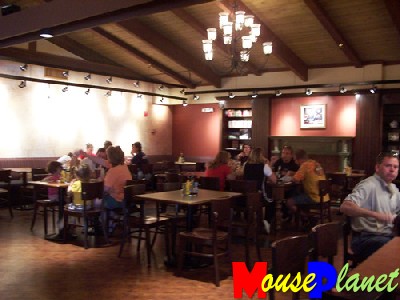 Indoor seating area at Earl of Sandwich (additional seating located outside on two sides of the building). Photo by Sue Holland.

In addition to hot sandwiches there are two tossed-bowl salads available, both priced at $5.95. The Earl's Cobb is made with roast turkey, bacon, Swiss cheese, cranberries, tomato and cucumbers in buttermilk ranch dressing. The Chinese Chicken has grilled chicken with Chinese leaves, tossed in ginger dressing and topped with crispy wontons.

Ready-made sandwiches, wraps and salads are available in two locations at Earl of Sandwich. There is a corner of the shop called Grab n' Go, where these items and bottled beverages can be obtained and then paid for without having to enter the regular queue. A selection of these items are also found in the area where customers pass from the order counter to the “pay & pick up” counter. These items are all cold, and stored in refrigerated cases. The Earl's Classics are sandwiches made on 10-grain hearth bread, and all sell for $3.95. There are six varieties—The Original (rare roasted beef with creamy horseradish, lettuce and tomato), Egg Salad, Chicken Salad, Tuna Salad, England's Favorite (sharp cheddar with tangy relish) and Turkey Swiss.

Three classic salads are available in this section as well—tuna, fruit salad and chicken salad—for $4.95 each. Wrap lovers have not been forgotten here, with six varieties sold for $4.45 each, including a few you don't find everywhere.

In case anyone still has room after the delicious sandwiches, wraps and salads, Earl of Sandwich also features a selection of fresh-baked cookies, brownies, scones and turnovers ranging from $1.95 to $2.45. Besides the usual cookie varieties they also offer toffeescotch crunch and gingersnap sugar. Brownies include the usual chocolate, but also kona brownie, raspberry blondie and lemon crunch. It's nice to find items that cannot be found at every other food location on the property! Another unusual or unexpected item is the Earl's Ice Cream Sandwich, which is a pair of thin biscuits (cookies) filled with vanilla ice cream, also available edged in coconut flakes or chocolate chips for $2.45.

The usual assortment of beverages is available, with guests serving themselves at the soda fountain machines. A selection of beers and wines is also available, as well as four flavors of fresh fruit yogurt smoothies (Hawaiian, strawberry/banana, peachsicle and cappuccino). The signature beverage is The Earl's Grey Lemonade—fresh lemonade infused with freshly brewed Earl Grey tea ($1.75 for 22 ounces).

Earl of Sandwich opens at 9 a.m. each day, and features three breakfast sandwiches for $4.95 each (bacon & eggs, ham & cheese or bacon, tomato & cheddar). They also will serve anything on the menu at that hour as well, so if you're craving a roast beef sandwich for breakfast, this is the place to be! Generally it's not very busy in the mornings, which means a much shorter wait than there will be by dinner time. 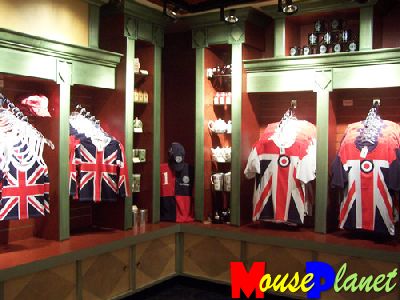 Merchandise with a British theme is available. Photo by Sue Holland.

The Earl of Sandwich is decidedly British, and a selection of British-themed merchandise is available for sale. At first glance you might think you've wandered into a shop in the United Kingdom at Epcot, right down to the tins of tea.

Anyone who used to enjoy eating at Gourmet Pantry in the past will most likely also love the Earl of Sandwich. The price can't be beat, the food is very good and the only downside is the potential for long lines. With a little advance planning though, it is possible to enjoy a meal here without spending longer than you'd like.