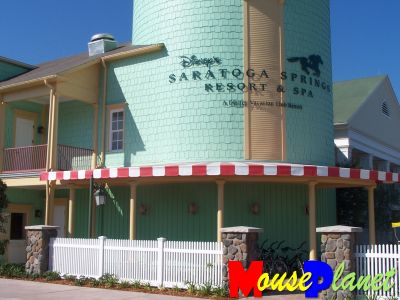 The last article covered the various accommodations available at Disney's Saratoga Springs Resort & Spa, so this time the focus will be on the public areas. The resort itself is reminiscent of the real Saratoga Springs in New York, with beautiful grounds and buildings. Currently only a portion of the guest rooms is ready, so while everything is uncrowded, it is an ideal time to visit to enjoy the amenities.

Past visitors to the Disney Institute will recognize some of the buildings, while others are newly constructed. Upon entering the resort, guests check in at the same building (now named the Carriage House) used previously. Bell services staff are around outside to assist with luggage, and plenty of parking is available nearby. 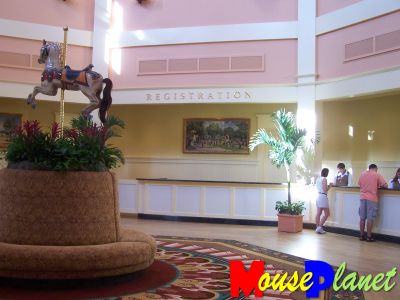 Registration area inside the Carriage House. Photo by Sue Holland.

The registration area is very large, which will become more important in a couple of years when the resort consists of up to 800 units. Right now a fraction of the space is staffed, and there was no wait for service when we arrived. In the center of the room is a seating area with a large carousel horse mounted on the top. The cast members working here and elsewhere in the resort seemed eager to see each and every guest, and obviously quite proud of their beautiful new resort. 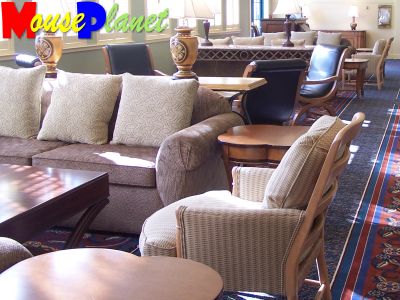 Comfortable seating area near the lobby. Photo by Sue Holland.

Disney Vacation Club (DVC) resorts always have a number of comfortable areas for guests to sit, whether it's to quietly read a book or socialize with friends. At Saratoga Springs, the area between the registration desk and the food court is filled with well-grouped comfortable sofas and chairs. With lots of sunlight from the large windows along the wall, this is a nice area and a great spot for people-watching. A quieter area called the Turf Club Lounge is located around the corner from the food court. During afternoon and evenings, beverages and light snacks can be purchased here, and this room is home to the only pool table at the Walt Disney World DVC resorts. Chess and checkers are available, and the television is usually tuned to a sporting event. 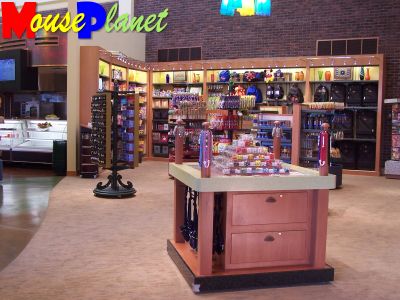 In a similar style to what is found at Disney's Pop Century Resort, the retail shop and dining area share the same space. The shop carries basic supplies, Disney merchandise and a nice selection of goods with the Saratoga Springs logo. Best of all, there is space to move around freely. 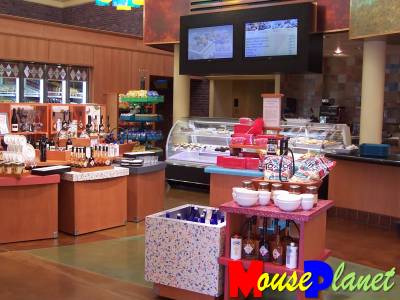 The Artist's Palette is more like a snack bar than a food court, and is much smaller than I expected. They are open from 7:30 a.m. until 11 p.m. and feature salads, sandwiches, soups, pizzas, desserts and some grocery items. Each night there is a family-size dinner available, as well. There is a fairly small seating area, but many guests will simply take their food back to their villas. 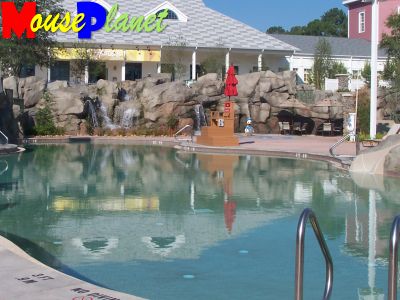 Just outside Artist's Palette is the resort's feature pool called High Rock Spring. This is the only pool where lifeguards will be on duty, and it also includes a fairly large spa and a water fountain play area for young children. The water slide begins at the top of the rocks, and is open when lifeguards are on duty. One side of the pool is zero entry, which is a great place for small children to play. There is also a water slide for guests using wheelchairs, which is a feature I have not noticed at the other resorts. 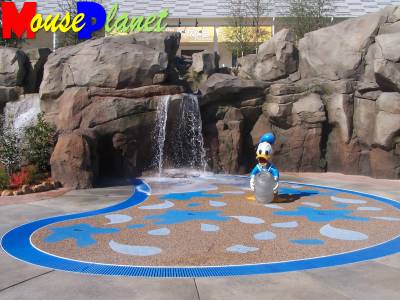 Also near the High Rock Spring Pool guests will find basketball, tennis and shuffleboard equipment available until 9 p.m. Bicycle rentals are available until dusk, although there will be better cycling after the construction is completed in the upcoming years. 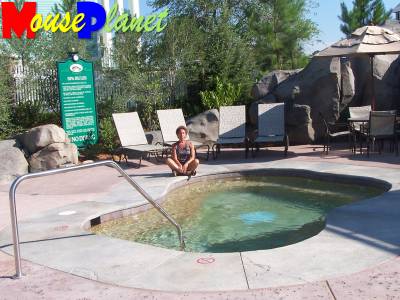 The On The Rocks pool bar is open from 11 a.m. until dusk, and is located adjacent to the High Rock Spring Pool. The laundry building is nearby, so people staying in a studio can enjoy a frozen beverage while their clothing is in the washer or dryer. 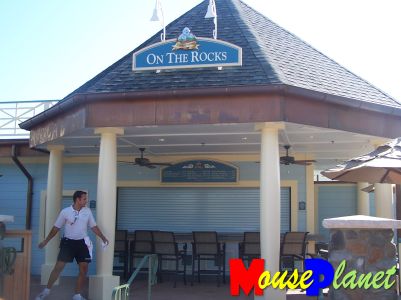 On The Rocks pool bar. Photo by Sue Holland.

The resort sells refillable mugs, and states they are refillable for the current stay (not for your lifetime). It appears they plan to change the mug design each season, which will help eliminate “cheaters.” This same system is in place at the DVC resorts in Vero Beach and Hilton Head Island, and I've often wondered why they don't implement the same at the WDW resorts if they wanted to enforce the “current stay” rule on mug refills. 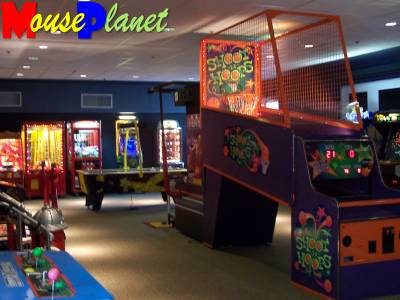 A decent-sized Win, Place or Show Arcade is located right across from the High Rock Spring Pool, and is sure to keep arcade lovers entertained as long as the parents' funding will allow. Around the corner is Community Hall, which is home to the resort's daily activities. There is a community hall at each DVC resort, and this one is open from 9 a.m. until 10 p.m. An activity schedule will be provided during the check-in process. 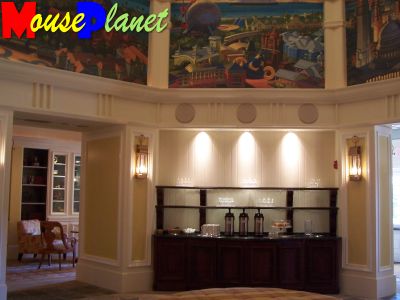 Disney's Saratoga Springs Resort & Spa is currently the only DVC resort that is not sold out. Recently, Disney relocated the sales office to this site, which is located in the Preview Center. The presentation is no-pressure and worth checking out if you have even a slight interest or curiosity about the program. The Preview Center has a room where children are supervised while the parents meet with a guide and tour the models. Beverages and light snacks are available in the main room, which is highlighted by a nice fireplace and beautiful paintings of some of the world's major cities (watch them carefully to see the moving lights). 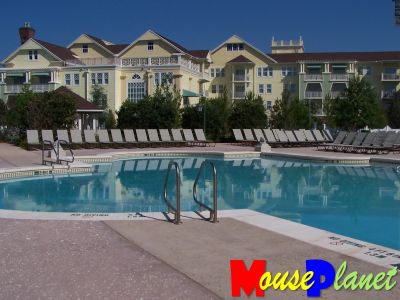 Currently the Congress Park section of the resort is open, and is home to the first quiet pool. This section consists of the four buildings directly across from Downtown Disney. The quiet pool is large, with plenty of comfortable lounge chairs. There is also a hot tub and guest laundry located here. 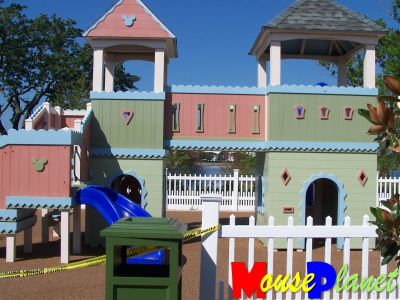 Next to the quiet pool in Congress Park is another playground for the children. This one was not quite open as of early June, and is a traditional playground rather than a water-based one. It really did not look like anything worth a special trip, but if the children want to burn off some energy while the parents relax at the pool then it's a good thing! The playground is open from dawn until dusk. 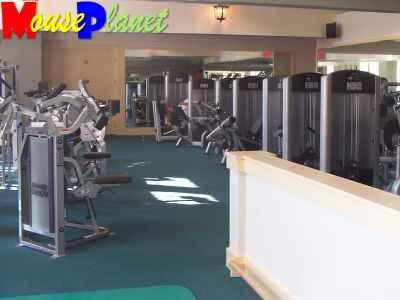 Large fitness center is part of the spa at Saratoga Springs. Photo by Sue Holland. 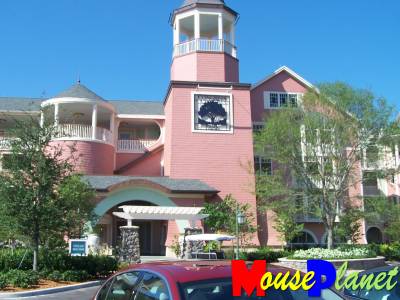 One of the open buildings in Congress Park. Photo by Sue Holland.

Currently four of the planned 12 buildings of villas are near completion. The plan was for one to open each month for four months beginning in May 2004. The exterior color scheme used is similar to what is seen at the Boardwalk Villas Resort, without the awnings. Inside though, there are significant differences.

Boardwalk Villas Resort is more like a hotel, while Saratoga Springs is more like an apartment complex. Here you will not find interior hallways leading to the rooms, or even carpet on the floor. Instead, there is a cement walkway under cover but still open to the outside. Once inside the villas though, Saratoga Springs is every bit as nice (or nicer, depending on your personal taste) as Boardwalk and the other DVC resorts. 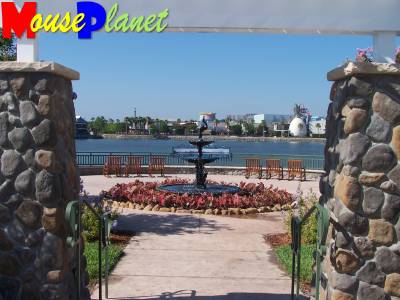 View of Downtown Disney from the pool in the Congress Park section. Photo by Sue Holland.

Location can be an important factor in deciding where to stay, and some people may consider Saratoga Springs' site near Downtown Disney to be out of the way. For anyone planning to spend significant time in that area (Pleasure Island or Typhoon Lagoon for example), the location would be a major plus. Bus service runs throughout the day, just like at any Disney resort, and no park is terribly far away. There is also a boat that runs between this resort, Old Key West and Downtown Disney—but be aware that once it leaves Saratoga Springs it goes to Old Key West before returning to the Marketplace at Downtown Disney. For that reason, walking or riding the bus to the Marketplace will be a faster alternative.

Overall, Saratoga Springs Resort & Spa is a great addition to the DVC family of resorts, and is sure to be a popular place to stay.