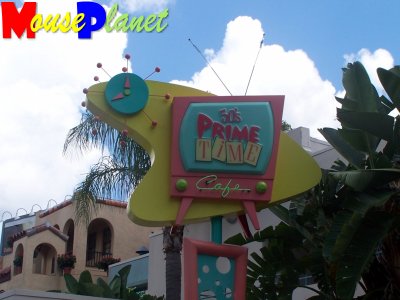 When the Disney-MGM Studios opened in 1989, a couple of innovative and entertaining full-service restaurants were added Disney's extensive list of eateries. The Sci-Fi Dine-In simulated being at an old-fashioned drive-in movie theater, where guests were seated in convertibles, and old science fiction movie clips were shown on the big screen. The other unusual restaurant was the 50's Prime Time Café. Here customers are transported back to the 1950s thanks to Disney's attention to detail in the décor and costuming.

50's Prime Time Café is open for lunch and dinner daily, and priority seatings are recommended. Priority seating is Disney's version of a reservation, with the caveat that the party will be seated at the next available table after their priority seating time. Usually that wait is only a few minutes, although during busy periods if the previous party has not left, the wait could be longer. To make a priority seating, call (407) WDW-DINE (407-939-3463) up to 60 days in advance of your meal. 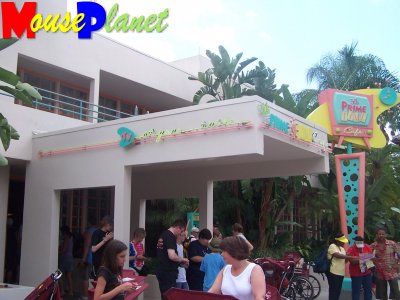 The restaurant is located near the Indiana Jones Epic Stunt Spectacular, and right next to the Hollywood & Vine buffet restaurant. The two restaurants are actually connected, and share restroom facilities. 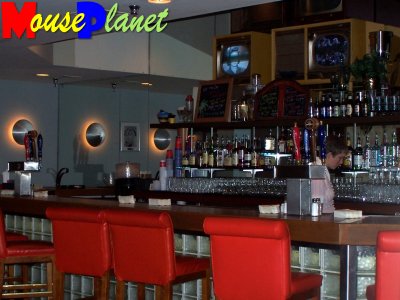 Tune In Lounge is a comfortable spot for an adult beverage. Photo by Sue Holland.

There is also a full bar in the section referred to as the Tune In Lounge, which is a nice place to have a beverage even if you are not waiting for a table for a meal. There are several specialty alcoholic and non-alcoholic choices available, and most come with the option of an ice cube that lights up. These beverages are also available in the restaurant portion, and the special ice cubes can be added (for a fee) to any drink. They are not inexpensive—specialty drinks with the ice cube cost $8.75 and the non-alcoholic version costs $5.99. The ice cube is a pretty cool novelty item, though. 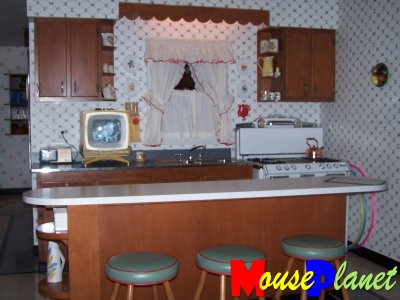 The story or theme at 50's Prime Time Café is that Mom is in the kitchen cooking, and everyone present is family. Generally everyone is referred to as kids—when the Smith family checks in and their table is ready, an announcement is made calling the “Smith kids.”

Servers tend to be your aunt, uncle or cousin, and there is a lot of good-natured ribbing that occurs here. Someone looking for a quiet meal with little attention would be better off choosing another restaurant. The servers chastise diners for any elbows spotted on the table, and expect people to set their own table using the flatware found at the center of the table. It's not uncommon for diners to be given nicknames by the servers, such as Spanky, Princess, or Scooter. It can be great fun to play along with them, and children in particular seem to enjoy watching their parents being treated like kids. 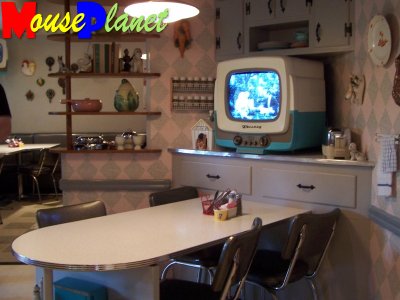 Television shows can be viewed from all tables. Photo by Sue Holland.

There are several black-and-white television sets located throughout the restaurant, ensuring a view from every seat. Clips of old 1950s situation comedies are played continuously; bringing back memories to those of us who were alive back then. The chairs and tables are exactly what was found in kitchens across America during the 1950s and 1960s, and the decorative items are all representative of that time period as well. The servers are dressed in old-fashioned costumes similar to what was seen back then, and it is easy to forget we haven't traveled back in time.

At any restaurant, the theming and entertainment value can be a big part of the enjoyment, but the primary draw is the food. Mediocre food would probably not keep people coming back again and again, and this restaurant is a favorite of many guests. As expected, prices and portions are lower during the lunch period. Lunch also includes several sandwiches, while dinner includes more entrée choices.

Appetizers are the same at lunch and dinner, with the exception of New England clam chowder only being available at dinner. A thick chicken noodle soup is available, which can be combined with a small salad to make a meal.

In the 1950s we were not as health-conscious as we are today, and the menu includes several “comfort” foods. There is a huge platter of thinly sliced onion rings that are very tasty, as well as french fries with your choice of gravy, cheese, or chili and cheese. There is also a smoked trout dip, which comes with baked tortilla chips. My favorite choice is called Mom's Fried Boursin Cheese, which is lightly breaded and drizzled with raspberry sauce, served with toasted French bread slices. It may sound strange, but it is absolutely delicious! The appetizers range in price from $2.39 to $5.99 each.

Each day there is a “special” entrée offered, but the most popular menu items are the golden fried chicken, traditional meatloaf, and the old-fashioned pot roast meals. The chicken meal is a half-chicken served with mashed potatoes and the vegetable of the day for $12.99. The meatloaf is a blend of beef and pork topped with a tomato glaze, also served with the mashed potatoes and vegetable for $12.99. The pot roast is incredibly tender (no knife needed) and comes with the same potatoes and vegetable for $13.99. Two people can share any meal, and the kitchen has always split the portion in the kitchen to make it easier on the guests.

Other lunch offerings are as follows.

At dinner the same fried chicken, meatloaf and pot roast entrees are available, as is the vegetable stuffed pepper, all at the same price as lunch. Items exclusive to dinner include various steaks, pork and seafood choices.

Portions tend to be fairly large, and a “clean plate” sticker may be awarded to any diner who does not leave any food on their plate. Quite often the servers will make a person eat “one more bite” of something left behind, particularly if it is a vegetable. The server will put a bite of food on the fork and then feed the person while pretending the fork is an airplane flying into the (hopefully) open mouth, in the style of a parent trying to get a baby to eat one more bite.

Sometimes a guest will have to stand and sing an old song such as “I'm a Little Teapot,” and if Mom or the server think a person is too sassy they may have to stand with their nose against the wall for a little “time out.” 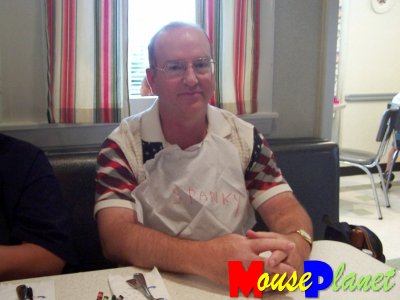 “Spanky” wears a bib waiting for his lunch to arrive. Photo by Sue Holland.

For anyone with room for dessert, there are several great items to choose from. In fact, it would be worth a visit just for dessert if you have a sweet tooth. The dessert menu is a View-Master reel, with a photo of each item on the reel. Adults and children enjoy using this old toy long after they've made their selections.

The most popular dessert is the S'mores, which consist of several graham crackers topped with chocolate pieces and toasted marshmallows. It is a large enough portion to share between 2 to 4 people, and is something not normally found in restaurants. The S'mores cost $4.49.

There is also a chocolate fudge cake with raspberry sauce for $3.49, cheesecake for $3.99 and a cobbler for $4.99. Rounding out the dessert offerings are milk shakes, ice cream floats, a banana split and a number of huge ice cream sundaes, all priced from $3.29 to $4.79. Dessert is the same at lunch and dinner.

Children have their own menu, which is the same at both lunch and dinner. The choices are:

50's Prime Time Café can be an excellent choice for good familiar food for anyone with a good sense of humor and willingness to be part of the entertainment. It is also a great place to bring first-time visitors who likely have never experienced anything like it before!