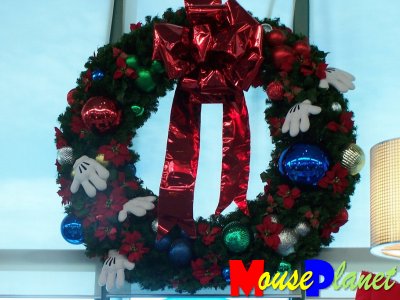 The holiday season may have just ended, but it's never too early to look ahead to the next one! The weeks that include Christmas and New Year's Day are two of the busiest weeks ever at the Walt Disney World Resorts and the Disney cruise ships. It is, however, possible to enjoy the festivities and holiday décor without the incredible crowds, by cruising during the first few weeks of December.

The Disney Magic and the Disney Wonder are transformed just before Thanksgiving, becoming beautifully decorated for the holidays. There are 25 Christmas trees, in addition to 25,000 Christmas tree lights, 1,260 feet of garland and 3,600 yards of ribbon. Most of the decorations are found in the central atrium of the ship, but almost every public room has a Christmas tree and some other holiday touches.

The cruise terminal at Port Canaveral is decorated with large wreathes that include Mickey's gloved hands, garland, and a Christmas tree. Right from the start passengers are swept into the holiday spirit, thanks to the decorations and background music. It does not matter that it may be 80 degrees outside—everything “looks” like Christmas! 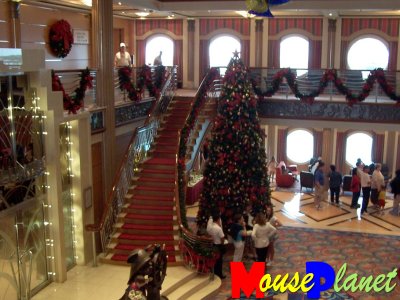 Atrium decorations will be unlit at first. Photo by Sue Holland.

Passengers board the ship around noon and enter into the three-story atrium in the center of the ship. Four glass elevators travel between decks 1 and 10, and a sweeping staircase extends from deck 4 to deck 3 on either side of the entrance to Lumiere's (on the Magic) or Triton's (on the Wonder). At this point none of the lights are on, but it still looks wonderfully festive. 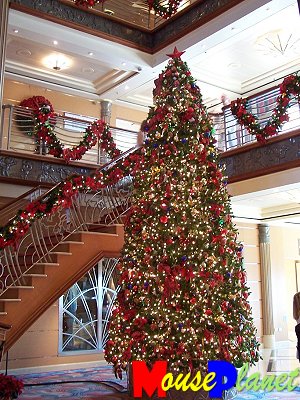 On the first evening of the cruise, there is an official tree-lighting ceremony. On the Disney Magic it was held at 7:45, which allowed guests from both early and late dinner seating to attend. The tree itself is nearly three decks tall, and becomes a popular spot for posing for photographs during the cruise. The best viewing of the tree lighting is from decks 3 or 4, as deck 5 seems a bit too high. 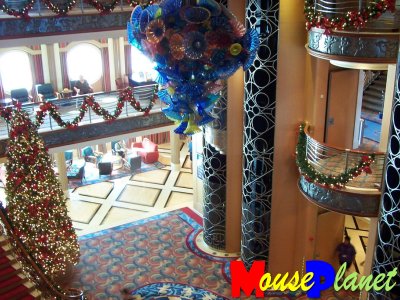 The Disney Magic atrium, glass elevators on the right. Photo by Sue Holland.

The actual ceremony includes singing a few Christmas carols, appearances by several of the Disney characters and a family chosen to turn the lights on. Throughout the cruise the characters are dressed in the same holiday attire they wear in the theme parks and resorts, with Goofy playing the part of Santa. Once the Christmas tree is lit, the artificial snow begins blowing down into the atrium, similar to what guests experience at the Osborne Lights at the Disney-MGM Studios. The lights will remain on for the rest of the cruise, so this first night is the only chance to see the lights actually come on. 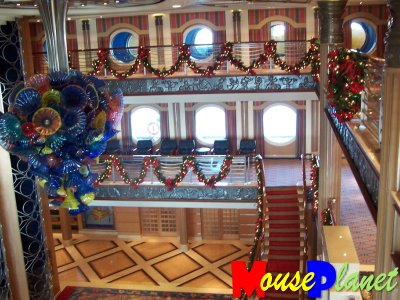 Disney Magic atrium all decked out for the holidays. Photo by Sue Holland.

Throughout the ship, Disney music is replaced by Christmas carols, which may seem odd to people visiting from the colder climates. Floridians are used to the holiday music when it is sunny and warm, though. There were a couple Christmas-related activities scheduled during the seven-night cruise and most likely there will be more holiday activities planned for Christmas and New Year's. Families (of two to six people) could register to design their own gingerbread house, with the event held one afternoon while at sea. 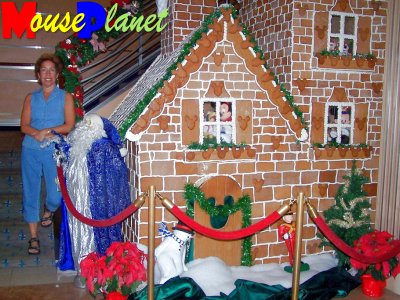 On a much grander scale, the Disney chefs create a large gingerbread house. On the Magic it was located on deck 3 near the back entrance to Lumiere's. On several evenings the ship's photographers were set up in this area, using the gingerbread house as the backdrop for individual or family photographs. During the day it was unattended, leaving it available for people to take photos with their own cameras. Unfortunately, some guests must have been checking to see if it really was gingerbread, as Mickey's ears were broken off on some of the cookies used to trim the roof.

One evening after dinner, Disney entertainers sang Christmas carols in the atrium and Mrs. Claus sat in a rocking chair next to the tree to tell the story “T'was the Night Before Christmas.” In order to accommodate people at the late dinner seating, this event was held at 10:00 p.m. but was well attended by the children on board despite the fairly late hour. The children sat on the floor of the atrium, while adults stood back or watched and listened from the railings on decks 4 and 5. 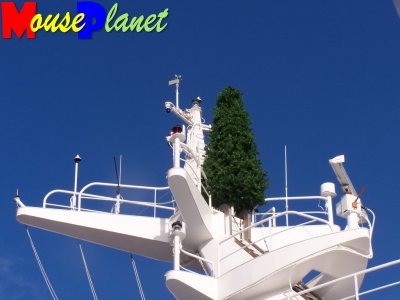 Christmas tree located at the top of the mast. Photo by Sue Holland.

Perhaps the most unusually located tree is the one found outside at the top of the mast at the front of the ship. It would be easy to miss unless you look up to the sky, although it is easier to notice it at night due to the Christmas lights on the tree. The outer decks were not decorated at all, other than the tree up on the mast.

The opportunity to meet and greet the Disney characters is a big reason to choose Disney Cruise Line over another line. During the holiday season the characters pose for photos with guests in front of the lobby Christmas tree in addition to the regular locations. Santa Goofy is expected to have a surprise for all children on Christmas Day, too. 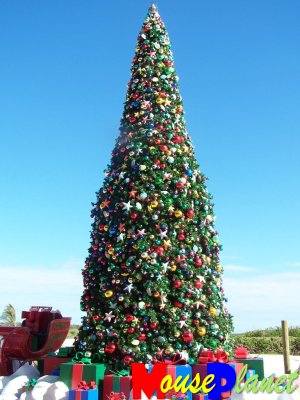 The most popular port of call on the Disney cruises is Disney's private island, Castaway Cay. Located in the Bahamas, Castaway Cay is also decorated for the holiday season. The holiday décor is not island-wide, however. Visitors will see a 40-foot tall tropical Christmas tree on the dock, next to a winter wonderland display. 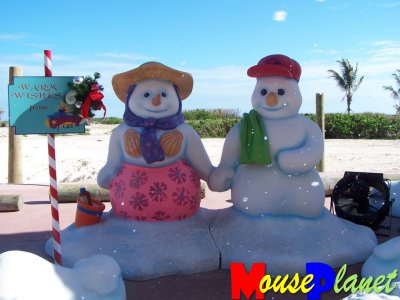 Mr. & Mrs. Snowman on Castaway Cay while it is snowing. Photo by Sue Holland.

Mr. and Mrs. Snowman (complete with shell noses and tropical shirts) stand next to a sleigh full of presents by the tree. Disney characters are dressed in a tropical version of holiday attire and pose for photos with visitors. Christmas music is playing continuously, and a fan blows the artificial “snow” across the area. During peak times, the ship's photographers take pictures here. 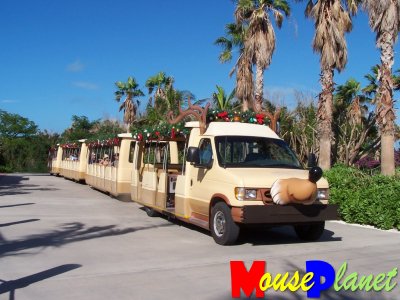 The island tram is also transformed reindeer for the holidays, becoming a very long reindeer! The antlers and face are seen first, but be sure to check out the back end for the reindeer tail. The tram is a whimsical touch, and adults in particular seem to appreciate it.

All of the holiday decorations make the cruise even more special than normal. Many families make a visit to Walt Disney World an annual family holiday tradition, and the Disney Cruise Line ships are also worth considering. There is nothing on the scale of the Candlelight Processional or the Osborne Lights, but the ships are beautiful and even Scrooge would have difficulty not getting into the holiday spirit on board! 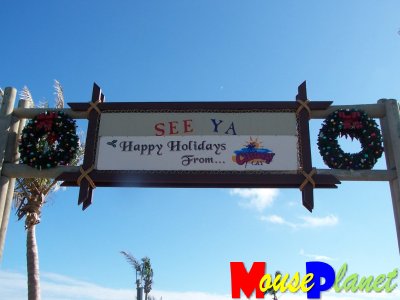