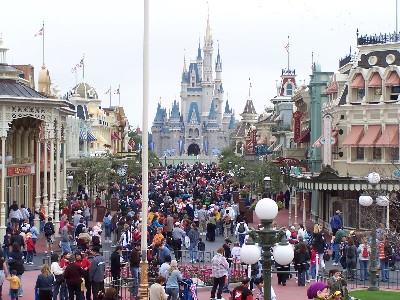 When thinking of places that can be notorious for having large crowds of people, most likely Walt Disney World comes to mind. And during certain peak seasons such as the two weeks surrounding Easter Sunday and the week between Christmas and New Year's, the Disney parks can be shoulder-to-shoulder with visitors. Even on the best of days, the Magic Kingdom tends to be unbearably crowded (by my standards), but it is possible to survive the crowds with a little advance planning and knowledge.

A visit to Walt Disney World can be broken down into at least the following three main components—your resort, dining, and the parks. Big crowds can threaten your enjoyment in any of these areas, although it is most likely to be a problem in the parks.

The singlemost important piece of advice to remember if you want to minimize dealing with crowds is to arrive at the park of your choice by opening time. Particularly at the Magic Kingdom, the crowds later in the day can be horrendous, but it is possible to get quite a few attractions done in the early morning hours.

Typically my Magic Kingdom days begin at 9 a.m. at park opening and I am leaving by 11 a.m. At that time the crowds of people entering the park, pushing their way down Main Street is truly awful—particularly compared to how uncrowded it was during my visit. The same is true at the other parks, but to a lesser degree than the Magic Kingdom.

Granted, most people visiting Walt Disney World are not going to be satisfied with only spending two hours at the Magic Kingdom, or leaving any park as soon as it starts getting busy. After going to the expense and trouble of making the trip, they need to see as much as they can.

In recent years Disney implemented a system called Fastpass, where visitors can essentially reserve a window of time during which they can ride a popular attraction while bypassing the regular line. Unless you enjoy standing in a 30-60 minute line, chances are Fastpass will enhance your vacation if you choose to use it.

Fastpass is computerized and tied to each person's park admission media. Certain popular attractions in each park have been designated as Fastpass attractions, and a bank of machines is set up outside each location. The specific attractions are designated on the guide map for each park, as well as on the tip board and at the attraction itself. Visitors insert their admission pass into the machine, where it is read and a Fastpass ticket is issued. Families or groups traveling together can have one member of their party obtain Fastpass tickets for the entire group, but that person will need the admission pass from each individual person. Children younger than 3 years of age who do not have a pass do not need a Fastpass. 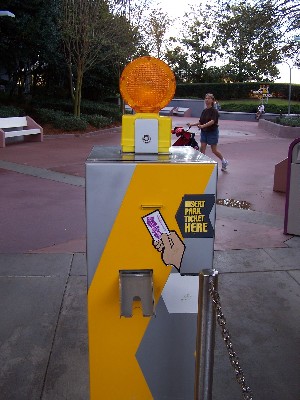 The Fastpass ticket will have a window of time (generally an hour) during which the holder can return to enjoy that ride or show. There is a separate line for people returning with the Fastpass, which takes them almost right to the boarding area without any significant wait. Visitors can obtain a Fastpass for another attraction 5 minutes after the window of time on the current Fastpass opens, or at the time stated on the ticket itself. On a busy day if you pick up a Fastpass at noon with a return time of 6 p.m., most likely you would be able to get another Fastpass somewhere else around 2 p.m.

It's always a good idea to see which attractions have Fastpass. If nothing else, this is a clue to which attractions are most popular and are therefore likely to have the longest lines later in the day. Not all busy attractions have Fastpass, however. Slow-loading attractions such as Dumbo in the Magic Kingdom generate very long waits, but since capacity is so low on rides like this Disney evidently has chosen not to add Fastpass there. Upon entering a park, pick up a Fastpass for the attraction most important to you, then concentrate on seeing as many of the slow-loading or low-capacity attractions as possible during the first 90 minutes to two hours.

At the Magic Kingdom this would include almost all of Fantasyland, which gets more crowded than any other area of the park. In Animal Kingdom the rides in Dinoland will develop long lines, so I usually head there first. Once they are out of the way, you can pick up a Fastpass for the Kilamanjaro Safari and the nearby Pangani Forest Exploration Trail is a convenient and pleasant way to spend the time waiting for your Fastpass window to open.

At MGM Studios the attractions that draw the biggest crowds are Tower of Terror and Rock 'n' Roller Coaster. Fortunately they are located in the same area, which makes it easy to pick up a Fastpass for one and then go stand in the stand-by (regular) line for the other provided you get there at park opening.

Epcot seems to handle crowds better than the other parks, although during busy seasons it is necessary to arrive early to get a Fastpass for Mission: Space or Test Track before they run out for the day. Many visitors to Epcot stop at Spaceship Earth and get in line, but it is almost always uncrowded (enough to walk right on) by mid-to-late afternoon. If you'll still be in the park then, I would save Spaceship Earth until later if the line is very long when you first arrive. 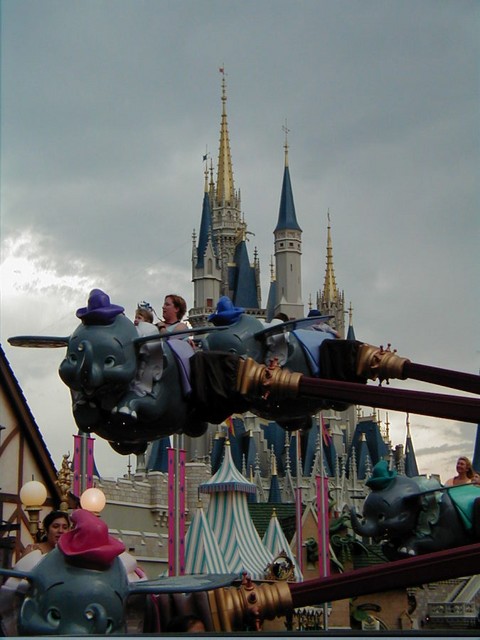 Rides such as Dumbo are notorious for long lines and big crowds. Photo by Brian Bennett.

Several of the Walt Disney World guidebooks identify those attractions that successfully handle large numbers of people versus those like Dumbo that handle far fewer people over a set period of time. Save the high-capacity attractions for the busiest time of the day, and focus on the others during the uncrowded first two hours of the day. Use Fastpass as appropriate to get some of your major attractions done with minimal wait time. Most importantly, though—get there early!

In some areas there are multiple lines to choose from, and quite often people just follow the person in front of them without even looking around to see a better option. Particularly at the turnstiles, most of the time when I am entering a park there are long lines at several yet there are some open with nobody in line at all! Look at the turnstile, and if you see a green arrow, that means it is open. Too often the cast members are busy helping other people and do not have time to tell people in line that there is an open turnstile right next door. Always be aware of your surroundings, and look for a less crowded line.

During the longer summer operating hours, some families find it beneficial to be at a park when it opens, then leave by lunch time to spend the afternoon relaxing at the resort or doing some other activity (see a movie, swim, shop). They then return to the parks for the evening, and while it will still be quite crowded at least they are avoiding the worst heat of the day.

Sometimes it is possible to avoid crowds by taking advantage of whichever park is open earlier or later exclusively for Disney resort guests. Be sure to check to see which attractions will be open during that time, as that particular park will be busier than normal that day and it does not make sense to put yourself in that position if the rides that are open extra hours are ones you would normally skip.

When dining, long lines can wreak havoc on a family with hungry children or anyone with a medical issue that requires them to eat on any particular schedule. If possible, plan to eat before or after the common meal times. Portions tend to be large, so a late lunch combined with a light snack at dinnertime might be all you need. Disney does not take reservations for their restaurants, but does offer “priority seating”. This works very much like a reservation, however. My experience has always been excellent, getting seated promptly at my assigned time. Others have not been so lucky, and sometimes have to wait for their table. The closer your time is to that meal's start time, the less likely you will have to wait. 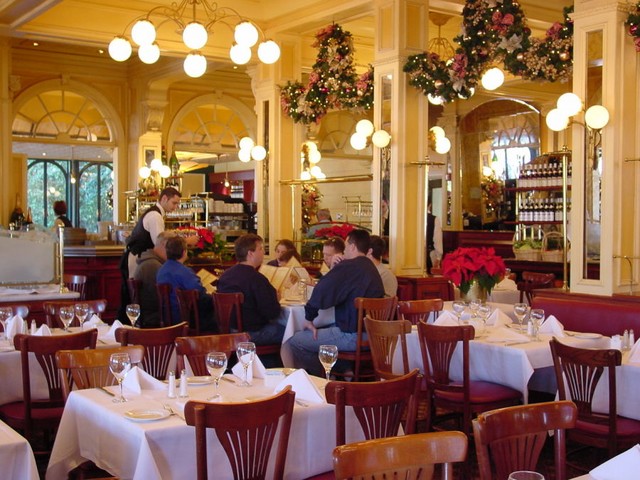 Lunch or dinner at a full service restaurant can be a terrific respite from the crowds. Photo by Sue Holland.

During busy seasons, booking a priority seating in a full-service restaurant can be especially beneficial. The counter service places will be mobbed, lines will be long, tables may be difficult to find, and patience wears thin. A leisurely meal in an air-conditioned restaurant will cost more, but for many people it will be worth it for the chance to relax and recharge before heading back out into the park. The Disney resorts with full-service restaurants are also an excellent choice for a relaxing and uncrowded meal.

At the Disney resorts it is safe to assume most (if not all) rooms will be booked during your stay, which can result in big crowds waiting for transportation and having breakfast before the parks. The food courts at the value and moderate resorts get extremely busy during breakfast hours. Planning to head to a park early will force you to the food court earlier than most guests, which will help minimize the crowds you will experience. Depending on close your room is located to the food court, one member of the family can be sent to buy breakfast and bring it back to the room.

Most Disney resorts have a main themed pool as well as one or more “quiet” pools. People wishing to relax at the pool away from crowds should head to the quiet pools. These pools do not have water slides, but they are generally very nice and have the added attraction of usually having very few people there.

While no visit to Walt Disney World will ever be free of crowds, it is possible to still get a lot done even on the most crowded days.