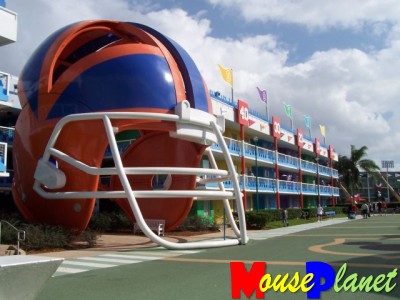 When Disney decided to enter the “value” resort market to compete with the many off-site motels in the area, its first offering was the All-Star Sports Resort. It was immediately popular with visitors, and was followed by the opening of All-Star Music and All-Star Movies in subsequent years. 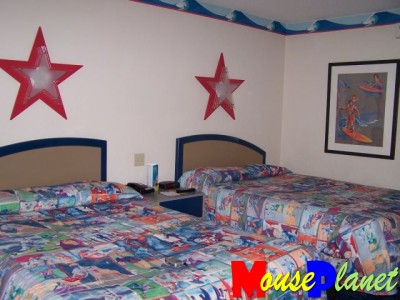 Guest room in Surf's Up section of All-Star Sports. Photo by Sue Holland.

Located at the edge of the property closest to Animal Kingdom, these resorts are rather out of the way. However, Disney buses transport guests to all of the parks at the same frequency as the other resorts, and it is also easy to get around using your own car or a rental. 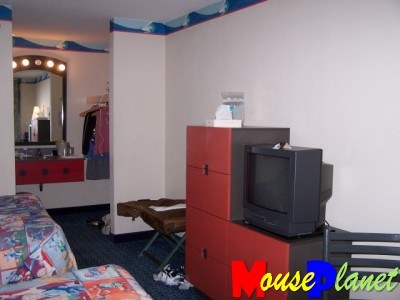 Storage space is limited to these cubes and the closet bar. Photo by Sue Holland.

As the name implies, the overall theme here is sports. The resort consists of 10 separate buildings, each containing approximately 200 guest rooms. With 2,000 rooms total, it is important to realize there will be a lot of other people in this relatively small area. A 2,000-room value resort will be in a smaller area than a 2,000 room moderate resort, which can make it feel more crowded (because it is!). As an example, the moderate resorts of this size each have four to six bus stops scattered around the resort, while All-Star Sports has a single bus stop at the main building. 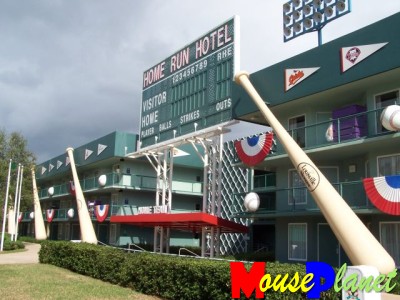 Home Run Hotel has a baseball theme, and is home to the resort's second swimming pool and guest laundry. Photo by Sue Holland.

Rooms at all of the value resorts (the three All-Stars plus the Pop Century Resort) are the same size, and are the smallest rooms in the Disney resorts. At 260 square feet, there is not a lot of room to spread out, particularly if you are a family of four. 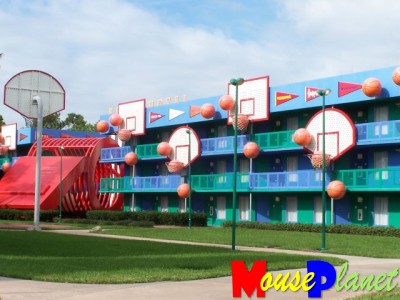 Hoops Hotel has a basketball theme. Photo by Sue Holland.

Each room contains two double beds, a set of cubes that function as a dresser and TV stand, small table with two chairs, and a nightstand. Each room is identical except for the wallpaper border, which is themed to the particular sport of that building. Coffee makers or refrigerators are not provided, but all rooms have a 19-inch television sets. Small dorm-style refrigerators are available for an additional $10 per night, however. The bathroom is very small, with enough room for a bathtub and toilet — the sink is located outside of the bathroom. 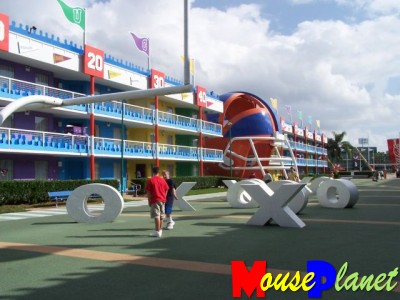 Touchdown! has a football theme. Photo by Sue Holland.

For a couple who plan to spend limited time in the room, or a family with very small children, the value resorts can be a good way to lower the cost of lodging. If the resort is a significant part of your vacation, though, or you are traveling with a couple of teens, the rooms and resort may be somewhat of a disappointment. Some families with older children book two connecting rooms, which is a very nice option. Not only do the parents have some much-deserved privacy, the family has two bathrooms at their disposal! 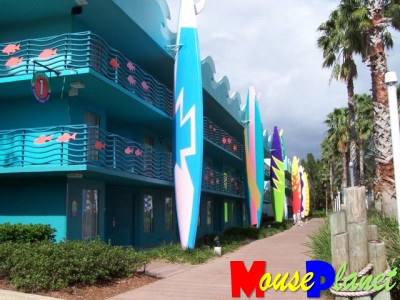 Surf's Up has a surfing theme, is home to the larger of the resort's two swimming pools, and costs an extra $10 per night, due to being the closest buildings to the buses, dining and shopping. Photo by Sue Holland.

There are five distinctly themed sections of the resort, each containing two buildings that are identical except for the décor. The sections are pictured below. 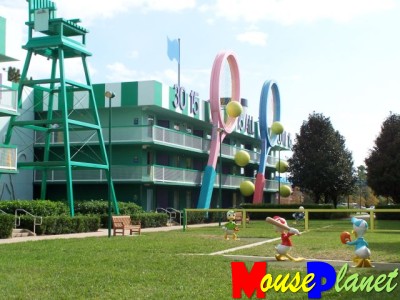 Center Court has a tennis theme, and is generally the quietest area. Photo by Sue Holland.

All buildings are three stories tall and have a pair of elevators located in the very center. Stairwells are available at the center and at the end of each wing. A giant icon of some sort covers each outside stairwell, and you can find another oversized sports item at the center of the building (such as the giant football helmet in Touchdown!). The noisiest rooms are generally those facing the pools in Home Run Hotel or Surf's Up, and those in Touchdown! facing the football field. 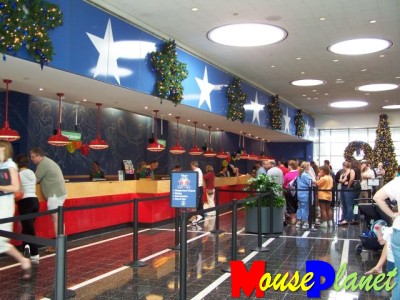 Unfortunately, checking in to All-Star Sports (or any value resort) can be a miserable experience. At times the line is very long, which is a very unpleasant way to begin a vacation. At other times the line may be short or nonexistent, but it is best to expect that most likely you will be standing in line waiting to check in. 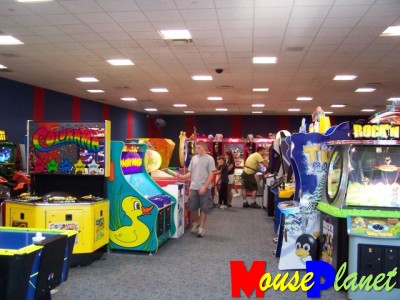 Fairly large arcade is located around the corner from the lobby. Photo by Sue Holland.

The official check-in time is 4 p.m., which means the room may not be ready until then. In my experience it is almost always ready sooner than that, and during slower seasons sometimes the room is ready well before lunch. The cast members do their best to get you into a room if you ask, but that might mean staying in a different section than what you originally requested. There is a section of the lobby set up for children to watch Disney movies while the parents are in line, and that area is visible from the queue. An ATM and restrooms are also located in the lobby. 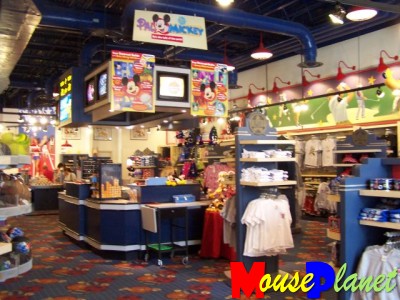 Merchandise shop is located next to the lobby. Photo by Sue Holland.

The hallway separating the arcade and front desk from the food court and shop is filled with photographs of several sports stars, representing each of the five sports. One end of this hallway takes guests to the bus stops, while the other end is at the Surf's Up swimming pool. 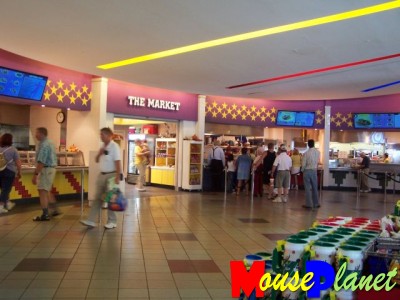 Dining options at All-Star Sports are somewhat limited. There is no full-service restaurant, but the food court does offer a variety of choices at reasonable prices. There is an outside bar near the Surf's Up pool, as well. The seating area in the food court has an area where animated Disney movies are shown, which can be a plus or a minus depending on your specific party. 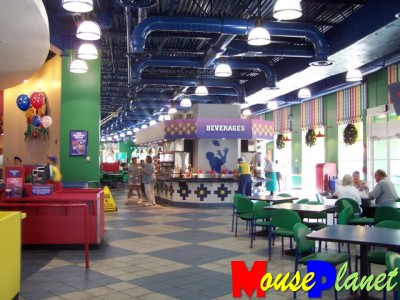 Refillable mugs are sold here, and can be used at the soda fountain and coffee/tea/cocoa stations for the duration of your current stay. The food court can be rather noisy (and therefore unpleasant) at times, but there are a handful of tables outside which can be very nice. A limited supply of grocery items is available from the food court and the shop, and a microwave is available for guest use inside the food court. 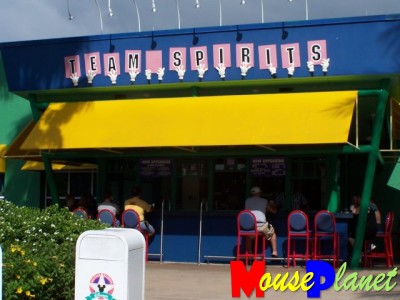 Team Spirits pool bar, located across from the Surf's Up pool. Photo by Sue Holland.

Swimming is the only recreational activity available at All-Star Sports, and there are two large swimming pools to choose from. Guests are also free to use the swimming pools at All-Star Music or All-Star Movies, as well. There are no water slides or hot tubs found here, but even Disney's most basic pools are much nicer than most of the pools found at off-site motels and hotels. The swimming pools are normally open from 8 a.m. until midnight, with lifeguards on duty from 10 a.m. until 10 p.m. One rather inconvenient situation is Disney's decision to not provide towels at the pool. Guests must bring towels from their room, then request housekeeping to bring replacements. 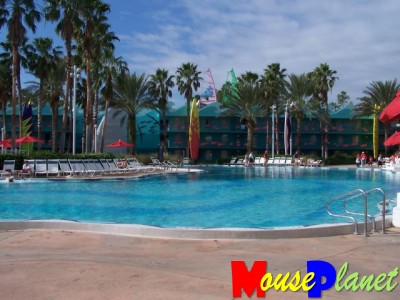 The larger of the two pools, located in Surf's Up. Photo by Sue Holland.

Overall, All-Star Sports is worth consideration if the budget for lodging needs to be as low as possible, or when a second room for the children is desired. The rooms may be small and there may not be many amenities, but the resort is clean and, thanks to the décor, has a definite Disney “feel” not found at off-site locations. 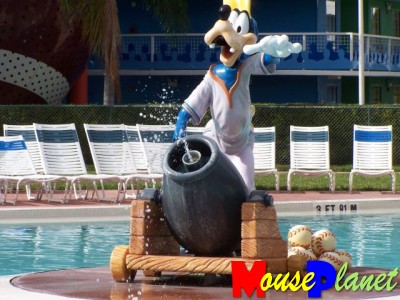 Having a car will make it easy to visit other resorts for more dining choices, and asking for a room not facing the pool or football field will ensure a quieter stay. At times, the three All-Star resorts share a bus, and when that happens Sports is always the first stop. During peak times the buses are not shared, as there are more than enough guests at each resort to fill most buses. I have spent several nights at the value resorts (including All-Star Sports), and many more at the more expensive resorts, and will gladly return to All-Star Sports when it meets my needs for a particular trip.