Walt Disney World's Downtown Disney started out in the 1970s as a collection of small shops located at one end of the Disney property. Years ago it was commonly referred to as The Village, and the most popular shop was a much smaller version of today's World of Disney (but did not share that name).

In the late 1980s Pleasure Island was added, and then in the 1990s the West Side became the third section. The entire complex was renamed Downtown Disney, although each section is also known as either The Marketplace, Pleasure Island or West Side. This article focuses on what is fairly new at Downtown Disney—if your last visit was more than a year or two ago, these things may be new to you.

At the Marketplace there are a number of shops that are either new or under renovation. Disney guests must like to pamper their pets, as Disney has opened a shop called Disney Tails. Inside, shoppers find pet clothing, furniture, toys and even packages of edible dog treats. A giant statue of one of the Dalmatians is a popular photo spot. Some of the merchandise here has also been seen inside the World of Disney, so if you get a discount at that store it would make sense to check there before making the purchase at Disney Tails. This shop is cute inside, and even has windows shaped like a bone—similar to a dog biscuit. 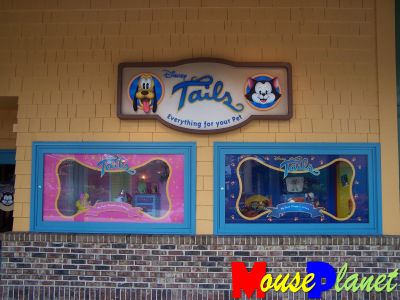 You can find dog bone–style windows at Disney Tails. Photo by Sue Holland.

Right next–door is another new area, which is a first for Disney property. In the hallway–type location that used to sell plants and garden items they now sell items costing $10 or less. Reviews have been mixed, but it always seems to be busy. Some of the merchandise is not particularly high quality, and nothing seems to be marked down. It is all regular–priced merchandise that happens to be not more than $10. If you enjoy garage sales and dollar stores, this shop may have great appeal. Otherwise, it may not impress. 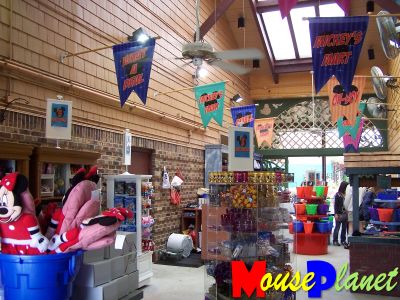 Everything costs $10 or less. Photo by Sue Holland.

Currently Goofy's Candy Co. shares a building with Earl of Sandwich, but a new location is being created nearby in the spot that used to house Disney at Home. It is scheduled to open in spring 2005 but no more specific date was available. There's a very good chance opened after I filed this article but before it ran, as I am sure Disney will do everything possible to get it open prior to the busy Easter season. Until it opens the old location will remain, but there is no word on what will happen to that space once the move is made. 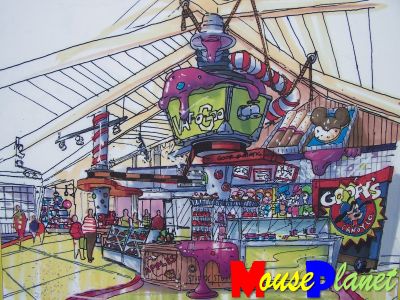 Another shop undergoing extensive renovations is the LEGO Imagination Center. This is also due to reopen in spring 2005 and new LEGO creations are already visible behind the construction fence. During the renovation a tent has been set up outside World of Disney, and LEGO merchandise is being sold from there. The playground area is behind the construction fence and therefore will not be accessible until the renovations are completed and the store reopens. The dragon in the lake appears brighter, so he obviously had some work done. The other LEGO creations that are partly visible over the fence all appear to be entirely new designs. 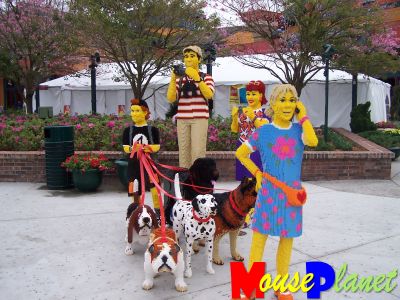 A new LEGO family is found near World of Disney. Photo by Sue Holland.

Pleasure Island is also seeing some changes. The Jazz club has closed and an Irish pub will be going into that space. Unlike the other clubs, the Irish Pub will not require Pleasure Island admission, and they will serve food (beyond popcorn and pretzels). This venue will be operated not by Disney, but by an independent organization (similar to Planet Hollywood and Rainforest Cafe).

Disney has tinkered with the pricing structure at Pleasure Island over the past year or so. The area used to be open to guests at no charge during the day, but currently is not accessible to anyone before 7:00 p.m. There is still an all–inclusive ticket that sells for $20.95 plus tax that gives access to all of the nightclubs for one night. For another $5 you can add five additional consecutive nights.

There is a new ticket costing $9.95 plus tax that grants access to one club for one evening, but excludes the Comedy Warehouse and Adventurer's Club. The shops and street are open free of charge, but since the entertainment cutbacks there really is not much to do here other than the nightclubs. There are no longer live dancers performing on the outdoor stage, and bands do not perform every night. The midnight “New Year's Eve” show (performed seven nights a week) has also been scaled back to a 5–minute showing of a video and a smaller fireworks burst with no confetti. Pleasure Island is still a fun place to be, but only if you have a ticket that provides access to the nightclubs.

A new shop featuring Harley Davidson merchandise will soon be opened next to the Adventurer's Club, in the spot formerly held by Mouse House. The projected opening date is listed simply as spring 2005, so hopefully this will be open in time for the busy Easter season.