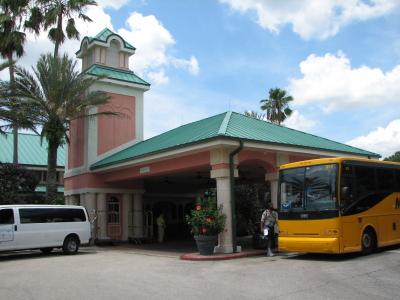 You know you've arrived in the Caribbean Beach Resort when you walk over these mats. Photo by Brian Bennett.

The experiment was a sucess. After the Caribbean Beach Resort opened, Disney's Dixie Landings Resort and Disney's Port Orleans Resort (now combined under the single Disney's Port Orleans Resort moniker) followed. Disney's Coronado Springs Resort, the first moderate resort designed as a convention hotel, followed several years later. Of course, as prices of Disney's hotel rooms continue to rise, the "value" category resort was created to keep the lowest room rates on property below that $100 level, thereby freeing the room rates at the "moderates" to creep up. It's not unusual to pay close to $200 a night at the "moderate" resorts nowadays, although special rates and package deals can lower the nightly amount significantly. 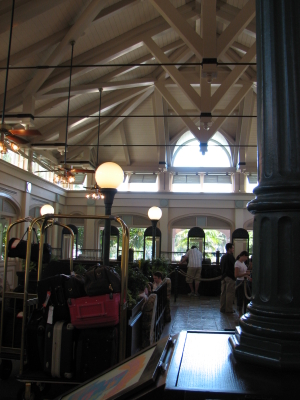 Customs House is intended to evoke the colonial times on the Caribbean islands when the Dutch, French, and English did everything necessary to protect their interests in the region. Photo by Brian Bennett.

Caribbean Beach Resort's lobby is in the Customs House, a stand-alone building that also houses guest services, bell services, and laundry drop-off and pick-up (if you want to have the Disney folks do your stuff for you.) In an unusual design twist, Customs House is even separated from the other central services and facilities of the resort (such as restaurants, shops, etc.) that are located over at Old Port Royale. 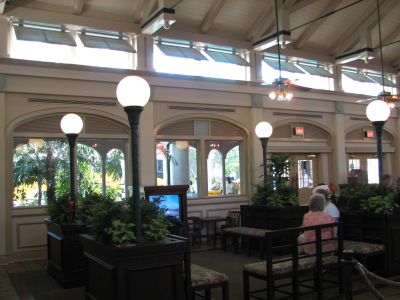 A seating area provides a place for some to rest while others in the party handle check-in chores. Photo by Brian Bennett. 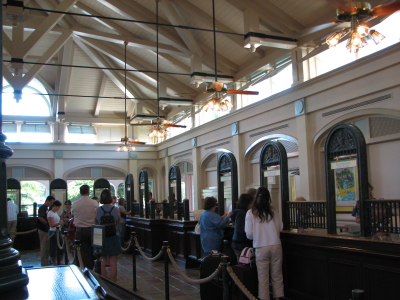 The registration area, one of Walt Disney World's largest, was designed to handle the largest number of rooms of any Disney resort up to the time that the Caribbean Beach Resort was constructed. Photo by Brian Bennett.

Customs House is quite a hike from the rest of the resort area. Most guests visit this building exactly twice during their vacation - when they check-in and when they check-out. 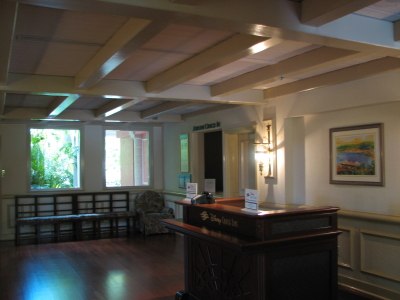 After check-in, it's off to the villages to get settled and let the vacation begin. 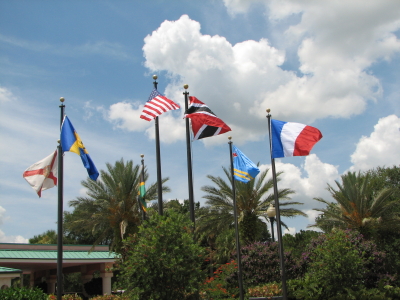 The flags of the various Caribbean "villages" are on display outside Customs House. Photo by Brian Bennett.

The guest villages are laid out around the resort's lagoon. After leaving Customs House on a clockwise route, you come first to Barbados, then Martinique. Old Port Royale Towne Center appears next, and is the home to Shutter's the resort's restaurant, the food court, shops, themed pool, and other central recreation areas (including the marina). Leaving Old Port Royale behind, Trinidad North and Trinidad South are next, followed by Jamaica and Aruba. 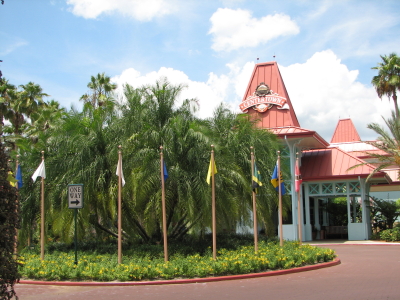 On the day I snapped the photos for this photo tour, I made a beeline from Customs House all the way to Old Port Royale where I had lunch and got out the camera. After lunch in the food court, I made my way around Towne Center, the themed pool area, walked across Caribbean Cay (formerly Parrot Cay) Island to Jamaica, then back to Old Port Royale to finish up the photo tour by driving around Cayman Way and Seabreeze Drive back to the resort exit. 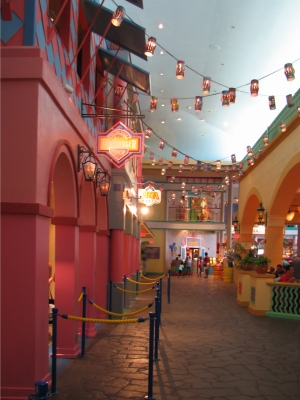 The food court shops as viewed toward the Straw Market. Photo by Brian Bennett.

While the food court at Old Port Royale is nicely decorated, its food is nothing special, and very typical of Disney fast food at the parks and other resorts. You'll find the typical pizza, pasta, hamburgers, chicken sandwiches, chicken strips, and the like. Beverages are handled via a self-serve area located just beyond the check-out registers. 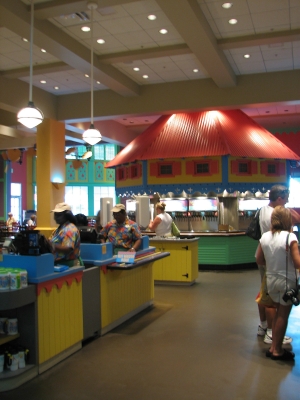 After making your meal selections at one of several different areas, your whole party can check out together to pay for the entire meal at once. Photo by Brian Bennett.

Seating is abundant around the food court area, and tables are plentiful in all but the very busiest of times and seasons. 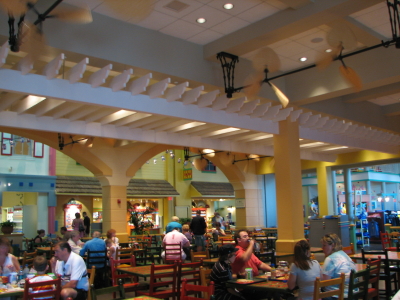 Ceiling fans provide a nice breeze for guests enjoying their meals, and the seating area is divided into several different smaller areas to reduce the feeling that you're eating in a cafeteria. Photo by Brian Bennett.

The Grab 'n' Go shop is the resort's best place to pick up snacks and breakfast items to take back to the room. A quick stop here at the Grab 'n' Go in the evening can save a lot of time in the morning when you'd rather be getting ready to go to one of the theme parks than dealing with breakfast. 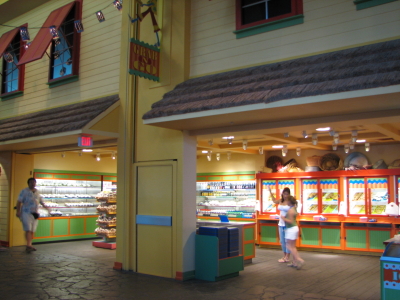 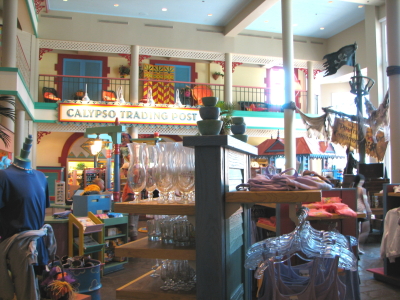 The Straw Market is located toward the entrance of Old Port Royale, right next to the Calypso Trading Post. Photo by Brian Bennett.

Tom Hanks probably wished for such a coconut when he was a "Castaway" when his plane crashed in the popular film. He might have preferred FedEx over the USPS... but then again, maybe not. 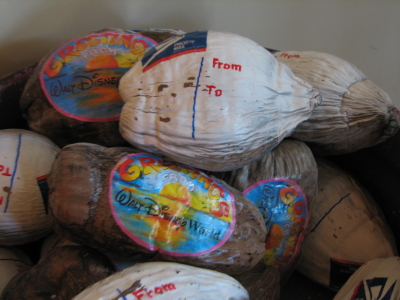 You can purchase coconut postcards at Straw Market. Photo by Brian Bennett.

Captain Jack and his kind are popular all over the world, so why not at Caribbean Beach Resort? 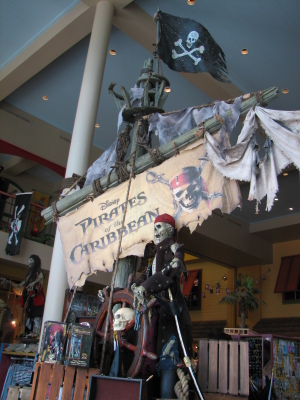 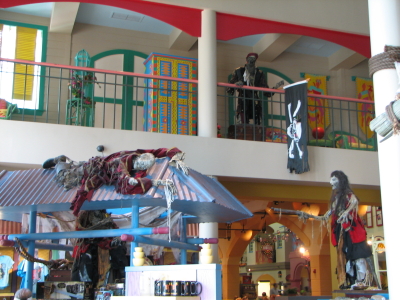 Buccaneers are taking over the whole Market. Photo by Brian Bennett.

Goobay Games, also located directly adjacent to the Straw Market, is the resort's arcade. While not as large as the Contemporary Resort's Food 'n' Fun Center, the arcade is certainly respectable. 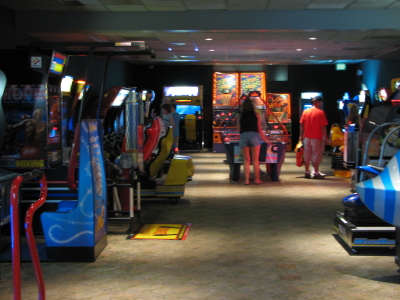 Boobay Games is a well-equipped arcade for teens. Photo by Brian Bennett.

The Calypso Trading Post might sell more character products and toys, but the truth of the matter is that 90 percent of the its merchandise could be swapped out with 90 percent of any other Disney resort's goods and you'd never know the difference. For example, the plush toys in the next photo are as readily available at the Boardwalk's Screen Door and Port Orleans' Jackson Square shops as they are here at the Caribbean Beach Resort. 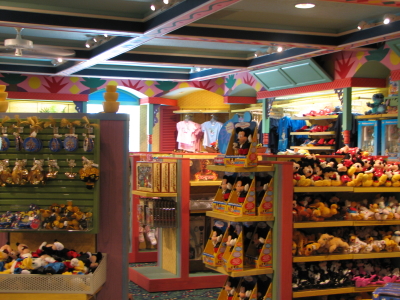 Plush toys are ever popular at the Disney resorts. Photo by Brian Bennett. 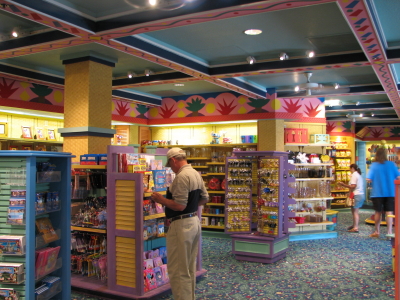 Postcards, picture frames, keychains, and other essentials are for sale as well. Photo by Brian Bennett. 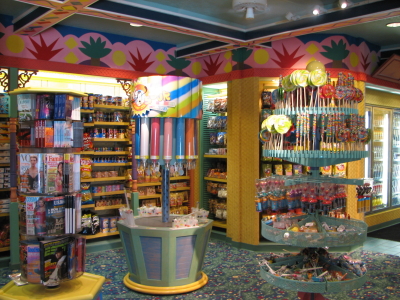 Candy, snacks, paperbacks and magazines are perfect things to buy and enjoy back in the room, or while swinging in a hammock on a white sand beach. Photo by Brian Bennett.

This is the end of the first of two parts for this photo tour of the Caribbean Beach Resort. In Part 2, appearing next week, we will head outside to the pools and themed grounds for the resort.