Celebrating the Purpose of Christmas at Walt Disney World

This is what one would call an opinion piece. It is not a photo tour (I promise to get back to that next month). It is not an article providing trip planning suggestions or advice. It is not a behind-the-scenes how-do-they-do-that kind of documentary. Instead, I will simply be sharing some things that I think are particularly important and that fit this time of year.

I don't mean to offend anyone (although this kind of article is almost guaranteed to generate more negative email responses from readers than any other thing I could write). If you don't want to read Brian Bennett's opinion, specifically about how Christmas is celebrated at the Walt Disney World resort from a Christian perspective, then skip this column and come back next month. Perhaps, though, this odd introduction has made you sufficiently curious that you enjoy the rest of this piece. Feel free to take all of this personally. 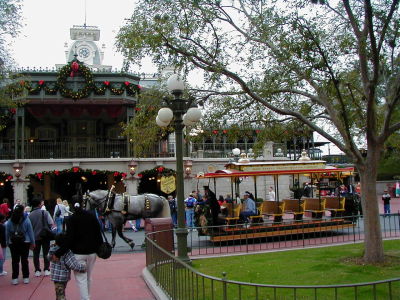 The beautiful decorations at the parks are an annual treat at the Walt Disney World resort. Photo by Brian Bennett.

Several years ago, back in 2002, my extended family visited Walt Disney World during the Christmas holiday season for the first time. As a family we were astounded at the incredible spectacle of the Osborne Family Lights. We enjoyed the decorations at the resorts and the parks and some of us attended Mickey's Very Merry Christmas Party for the first (and only) time to date. The night that we attended Epcot's Candlelight Processional for the first time was inspirational, just as it has been every subsequent time we've attended this spectacular presentation. There is no doubt that Walt Disney World and all of its guests celebrate Christmas in a spectacular way. (None of us knew back then that within a year my immediate family would end up moving down to Central Florida and that we would enjoy the decorations and celebrations of the season each year from then on.)

There is no doubt that Christmas, for Walt Disney World, is a blockbuster celebration. The week between Christmas and New Year's Day is, year in and year out, the busiest at the resort. The parks are packed, the resorts are full (although not so much that the resort would turn away guests because there is no room in the inns, especially since there are 19 Walt Disney World hotels plus Fort Wilderness Campground), and the decorations are spectacular. 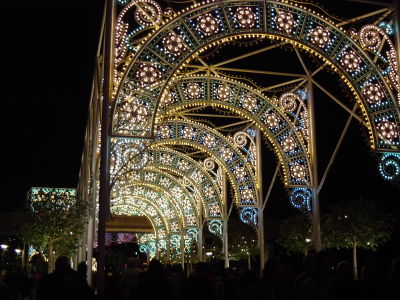 The Lights of Winter are a beautiful display at Epcot. Photo by Steven Railing (used by permission).

I'm pretty sure that my own answer will surprise many of you, but I really feel that Walt Disney World does a wonderful job of celebrating Christmas. It's true that most of the decorations and special events are based on traditions that have grown up in Western culture over hundreds of years. Father Christmas, Pierre Noel, and Santa Claus (among other incarnations) appear as icons of the secular part of the Christmas celebration that stresses giving and sharing over taking and receiving. Good will to man and peace on Earth are concepts that have a place in any Christmas celebration. The lights, the decorated Christmas trees, the gingerbread houses, wreaths, ribbons, bows, ornaments and even the fake snow on Main Street, USA all work together to provide a warm, good feeling for the guests of the resort.

Where is Christ in all of this rigamarole? The central figure, the baby that was born to Mary some 2000 odd years ago and the namesake of this season of celebration, is not hidden from view at Walt Disney World. Unlike Wal-Mart and Target in previous years and Best Buy in 2006, Walt Disney World celebrates the season but makes no attempt to eliminate Jesus from it. One small example is the Christmas carols that I heard in the parks this past week included "Oh Little Town of Bethlehem," "Joy to the World," "Hark the Herald Angels Sing," and "Away in the Manger." The Osborne Family Spectacle of Dancing Lights includes a beautiful stable/manger scene. 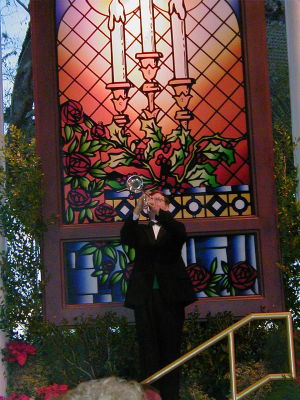 Epcot's Candlelight Processional is a moving presentation of the Nativity story. Photo by Brian Bennett.

But the best example of Walt Disney World's keeping of Christ in Christmas is Epcot's Candlelight Processional. The Candlelight Processional is a moving presentation in which the Nativity story, taken mostly from the gospel of Luke in the Bible's New Testament, is read by a celebrity narrator. Woven between the familar words is a fantastic performance of choral and orchestra music. The entire presentation, which lasts over a half hour (including the processional and recessional) presents the story of the first Christmas as clearly as the Bible itself.

The Candlelight narration ends with a reading of a piece written by James A. Francis called, "One Solitary Life":

He was born in an obscure village,
the child of a peasant woman.
He grew up in another obscure village
where he worked in a carpenter shop
until he was thirty.

He never wrote a book.
He never held an office.
He never went to college.
He never visited a big city.
He never travelled more than two hundred miles
from the place where he was born.
He did none of the things
usually associated with greatness.

He had no credentials but himself.

He was only thirty three.
His friends ran away.
One of them denied him.
He was turned over to his enemies
and went through the mockery of a trial.
He was nailed to a cross between two thieves.
While dying, his executioners gambled for his clothing,
the only property he had on earth.

When he was dead
he was laid in a borrowed grave
through the pity of a friend.

[I wish Mr. Francis had included mention of Jesus resurrection, but that afterall, is the Easter story not the Christmas story.]

It is clear that this man named Jesus was one of the most influential people in all of recorded history. His life, as simple as it was, presented a message of reconciliation with God (required because sin has broken the relationship between God and man). His death, as tragic as it was, was the means of paying the penalty for man's sin so that simply by believing on Him, anyone can be restored in relationship with God. In fact, Jesus explained it himself to a Jewish Rabbi named Nicodemus when He predicted His own death and explained why it was necessary:

John 3:14-18 (NIV)
14 Just as Moses lifted up the snake in the desert, so the Son of Man must be lifted up, 15 that everyone who believes in him may have eternal life.
16 For God so loved the world that he gave his one and only Son, that whoever believes in him shall not perish but have eternal life. 17 For God did not send his Son into the world to condemn the world, but to save the world through him. 18 Whoever believes in him is not condemned, but whoever does not believe stands condemned already because he has not believed in the name of God's one and only Son.

The bottom line is that no matter how kind, polite, and good we are or try to be, we can't ever be "good enough" to match up with God's requirement of perfect goodness. No one is able to completely follow God's law. Paul, who had been trained as a rabbi before becoming a Christian missionary and writer wrote:

Romans 3:19-26 (NIV)
19 Now we know that whatever the law says, it says to those who are under the law, so that every mouth may be silenced and the whole world held accountable to God. 20 Therefore no one will be declared righteous in his sight by observing the law; rather, through the law we become conscious of sin.
21 But now a righteousness from God, apart from law, has been made known, to which the Law and the Prophets testify. 22 This righteousness from God comes through faith in Jesus Christ to all who believe. There is no difference, 23 for all have sinned and fall short of the glory of God, 24 and are justified freely by his grace through the redemption that came by Christ Jesus. 25 God presented him as a sacrifice of atonement, through faith in his blood. He did this to demonstrate his justice, because in his forbearance he had left the sins committed beforehand unpunished- 26 he did it to demonstrate his justice at the present time, so as to be just and the one who justifies those who have faith in Jesus.

So Jesus' life, as simple as it was, shared a message of reconciliation with God and His death provided the means for that reconciliation, but His resurrection and ongoing life seals the deal! Paul also wrote:

Romans 5:9-11 (NIV)
9 Since we have now been justified by his blood, how much more shall we be saved from God's wrath through him! 10 For if, when we were God's enemies, we were reconciled to him through the death of his Son, how much more, having been reconciled, shall we be saved through his life! 11 Not only is this so, but we also rejoice in God through our Lord Jesus Christ, through whom we have now received reconciliation. 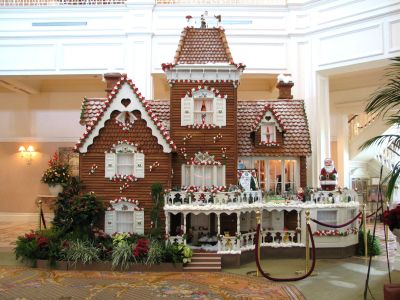 The spectacular gingerbread house at the Grand Floridian Resort and Spa is just an example of the beautiful decorations put up annually at the Walt Disney World resort. Photo by Brian Bennett.

Does Walt Disney World make all of this clear through the decorations and celebrations of the Christmas holiday? No, but neither did God make the Walt Disney Company (or any other corporation) responsible for sharing this good news. In fact, God gave that job to people that already believe it:

2 Corinthians 5:17-20 (NIV)
17 Therefore, if anyone is in Christ, he is a new creation; the old has gone, the new has come! 18 All this is from God, who reconciled us to himself through Christ and gave us the ministry of reconciliation: 19 that God was reconciling the world to himself in Christ, not counting men's sins against them. And he has committed to us the message of reconciliation. 20 We are therefore Christ's ambassadors, as though God were making his appeal through us. We implore you on Christ's behalf: Be reconciled to God.

Christmas time is a great time to consider all that is good in the world, but remember that the "reason for the season," the birth of Jesus, was God's gift to man. I hope you'll consider accepting this gift from Him for yourself. 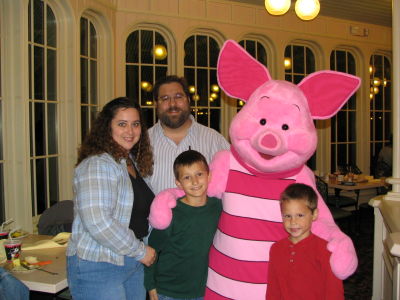 From the Bennett family to you, Merry Christmas! (This photo was taken at the Crystal Palace on Christmas Eve, 2005.) Photo by Brian Bennett.

Next time? We'll get back to some photo tours.