Now that I've been living in Central Florida for almost four years, my perspective on the various attractions has changed somewhat from the days when I was a vacationing Mid-Westerner coming down once or perhaps twice a year. If you've been reading my MousePlanet (and pre-MousePlanet) writings, you're well aware that I have long been a fan of the Disney parks. Over the years of visiting Orlando, my family and I also visited Universal Studios, Sea World, and the Kennedy Space Center attractions. Inevitably, though, it was the Disney parks at Walt Disney World where we would spend the bulk of our time.

It became my preference to stay on-site at the resorts owned and operated by Walt Disney World. I felt that the fun of staying at a themed resort, with its typically excellent service and close proxmity to the parks, combined with Disney's willingness to provide the transportation, were reasons enough to do so. Eventually, my wife and I became Disney Vacation Club members and spent most of our vacation time staying at DVC resorts at Walt Disney World.

In 2003, of course, we sold off our DVC "ownership" and moved to Kissimmee, Florida. We moved my wife's scrapbooking business (MouseMemories) here from Michigan, rented a house for a year while our new home was built, got the boys settled into their school, and joined a Bible Baptist Church (link) where we are now active members. We're about as solidly planted here in Florida now as we used to be in Michigan (OK, the recent successes of the Red Wings, Pistons, and Tigers have me cheering for the old hometown teams, but I don't consider that a problem).

So what is living 30 minutes from Walt Disney World like now that we've been here this long?

Part of the answer to that question lies in the fact that we still have annual passes to the Disney parks. In fact, beginning last year we upgraded our passes to premium APs so we could also enjoy DisneyQuest, Blizzard Beach, and Typhoon Lagoon. In contrast, we've allowed our Universal, Sea World, and Kennedy annual passes to expire.

Why would we continue to visit the Disney parks and drop the others? How about this analogy... I felt like going to Universal (and Islands of Adventure) and Sea World was like chewing an old stick of gum. Visiting the Magic Kingdom, Epcot, Studios, and Animal Kingdom is more like enjoying an everlasting gobstopper—they just last a lot longer. 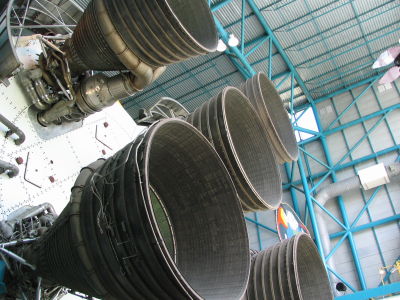 Kennedy Space Center is just too far away for us to plan to visit several times in a year. I've learned my lesson. No more annual passes to the KSC facilities. Instead, we'll go over to the Cape when friends and family that are in town have a desire to do so... and we'll thoroughly enjoy visiting with them. With the opening of the new Shuttle Experience, we just might have to visit the Cape for a day sometime soon. Except for that draw, though, it would have been a long time before we made the two-hour trek to spend the day looking at displays about other people exploring space.

During the last few months of having our Universal APs, we didn't even go back to those two parks. We knew the date was soon coming that they would expire, and Barbara and I let it happen without a second thought. Except for the various children's playground areas (especially the Jurassic Park-themed area at Islands of Adventure, which is spectacular), we just didn't enjoy the themes and attractions as much as the Disney ones. Most of the Universal attractions are still oriented towards teens and adults that our boys (now 10 and 7) are still not ready for.

For my part, I was tired of going to a park for fun and coming home with a splitting headache because the attractions spun, shook, and knocked me around so much that I left feeling like I had a minor concussion. You might think I'm exaggerating a bit, but I would guess that I went home from the Universal Parks with a headache at least three-quarters of the time. If it wasn't the roughness of the rides then it was something else... and in any case, it wasn't fun. 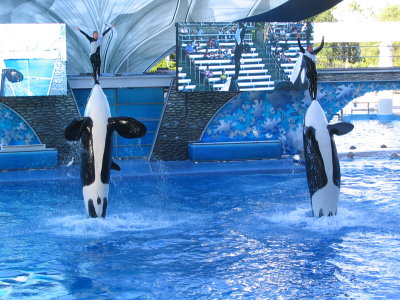 In contrast, as a family we do enjoy Sea World quite a bit. 10-year-old Allan has said at times that he would like to become a dolphin or orca trainer. Michael just enjoys sitting in the splash zone of whatever show we're seeing. The only problem with Sea World, and the reason why we haven't renewed our APs there for a while, is that the park is oriented around repetitive shows. Once you've seen Believe, Seamore and Clyde, and the other shows a couple of times you'd pretty much enjoyed the park. When they get older, I think Allan and Michael will enjoy the Atlantis, Wild Arctic, Kraken attractions, too, but for now it's all about the shows—and seeing the shows over and over again wears thin after awhile.

I think that is why Animal Kingdom and the Disney-MGM Studios are my least favorite Disney parks. Those parks, too, focus a lot of attention on shows. Even Kilimanjaro Safaris, with its live animals on display, is pretty much a show. Whereas we used to visit each of the Disney parks about the same amount, even going so far as to be on a rotating four-park routine when we first moved here, we now visit those two parks much less often.

Typhoon Lagoon and Blizzard Beach are new family favorites. We didn't come to the water parks for many years (from 1993 until 2006, we hardly ever visited Typhoon Lagoon... and last summer marked our first ever visit to Blizzard Beach). We visit one of these two parks about every other week or so during the hotter months. We've found that hitting the park at 10:00 a.m., having lunch around 1:00 p.m., and departing around 5:00 p.m. allows us plenty of time to enjoy Castaway or Cross Country Creek (usually many times throughout the day), taking in some water slides, and giving the boys some time to enjoy the big waves of Typhoon Lagoon or the Ski Patrol Training Area at Blizzard Beach.

The Magic Kingdom and Epcot, along with the water parks, are now my family's favorite places to spend our off-time. When we are taking on the Evil Emperor Zurg (hey, I got 772,900 points last weekend!), or enjoying a family meal at Teppanyaki (stilled called the 'hot table' restaurant at our house), or sliding down a man-made mountain in a family raft, we are together. We're enjoying the experience, and spending and enjoying our time together.

Just the other night, we went over to the Magic Kingdom. We started the evening by visiting the Monsters Inc. Laugh Floor for the first time. My opinion? the Laugh Floor was OK, but not spectacular. Frankly, the times that I've visited Crush over at the Living Seas at Epcot have been a better time.

As we exited the Laugh Floor, we walked around and picked up Fastpasses for Buzz Lightyear's Space Ranger Spin and then walked across Tomorrowland to get in line for Space Mountain. It was our misfortune to have a lengthy delay, during which the lights were obviously on inside the Mountain while we were stuck 80 percent of the way from the entrance to the control station. Within minutes of the lights going out, we made our way past the control station and to the right-hand switchback queue area. It wasn't long before we were in our rocket ship and were speeding across the galaxy. Allan and Michael love space mountain. I loved hearing the giggles and exclamations as we sped down the track and hit re-entry just before disembarking.

Next, we walked back over to Buzz Lightyear's Space Ranger Spin, as Michael and I teamed up against Barbara and Allan to see which twosome would do the best job of saving the universe. Michael and I won (774,900 to 349,700... yeah, Michael was that helpful). Allan asked if we could see Stitch, an attraction we haven't experienced since opening week many, many months ago (it's just not a great attraction nor was its XS-Tech predecessor, Alien Encounter).

We walked across the hub and caught a quick dinner at Pecos Bill's before making our way back to the Shooting Arcade (the boys will drop one of my bucks to shoot up Boot Hill faster than they'll buy a churro). Of course, dad bought churros right afterwards.

Oddly enough, after that we walked back to Tomorrowland, again, because the boys wanted to see how long the line for the Tomorrowland Speedway was. It turned out to be a short one, so we jumped in. We soon learned that Michael has grown enough over the last few months that he is now qualified (by height) to drive his own car! We celebrated his new-found altitude by riding the Speedway not once, not twice, but three times. The last time, in fact, we allowed the boys to go through the queue and drive their cars themselves. While the boys were taking their last trip around the Speedway, the park closed.

The whole evening was filled with shared and interactive experiences. 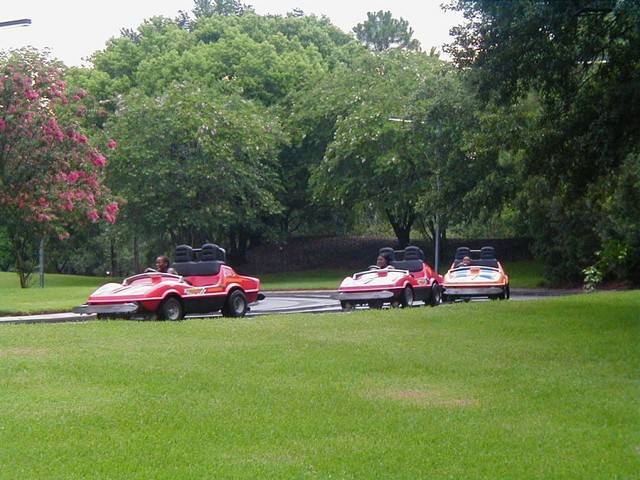 So the Magic Kingdom isn't as high-tech as Universal Studios, and the Islands of Adventure have more intense thrills than Epcot. Sea World may boast a great steel coaster and a well-themed flume ride, along with some well-behaved five-ton killer whales. Kennedy Space Center has some great educational displays, and history nuts and those interested in space exploration owe it to themselves to go to the visitor's center and spend some quality time...

But now that my family and I call Central Florida home, we've found that the destinations we enjoy the most, of all the many options here, have turned out to be the Magic Kingdom, Epcot, Typhoon Lagoon, and Blizzard Beach—with Disney-MGM Studios and Animal Kingdom warranting occasional visits. These places not only have a lot of repeat appeal, but they allow us to enjoy our precious time together—as family—just the way Walt had dreamed.