A Walk Around Wilderness Lodge

A Walk Around Wilderness Lodge

It had been quite awhile since I made my way over to Wilderness Lodge, so I decided that a short walk around the resort would be a nice way to spend an afternoon. 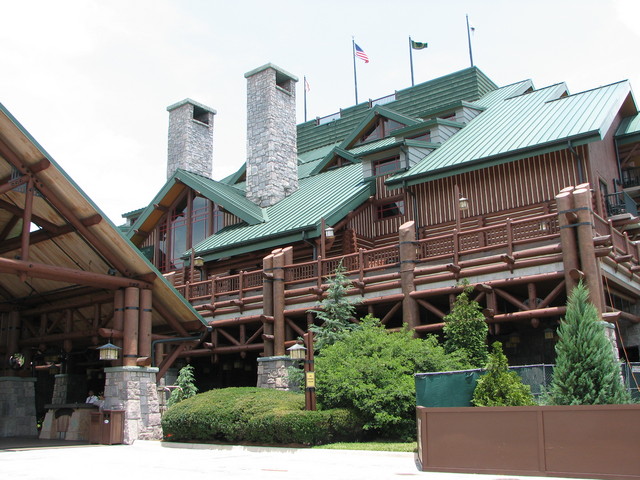 Wilderness Lodge opened in 1994. It's a remarkable building, reminiscent of the old National Park lodges built early in the century, such as Yellowstone Lodge (1904) and others in Yosemite and other National Parks in the Western U.S. 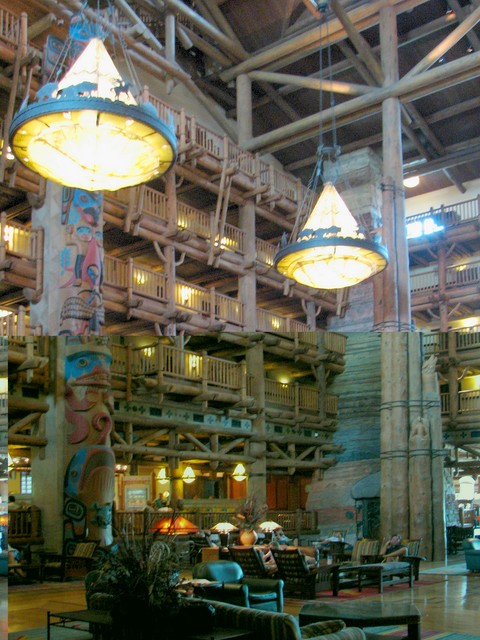 The expansive lobby of the Wilderness Lodge never fails to impress. Photo by Brian Bennett.

I don't think there's another resort at Walt Disney World that has done as good a job of capturing the atmosphere of a region of our nation and era of American history. From the entry to the lobby to the courtyard behind the building to the restaurants, Wilderness Lodge is a classic.

Just walking around the lobby area of the resort brings up lots of fun surprises. On various floors and in staggered locations, groups of couches and chairs atop gorgeous rugs provide places for groups to meet and converse.

Getting to and from these little sitting areas is fun in itself because the lodge has sets of narrow stairs that lead from one floor to the next. 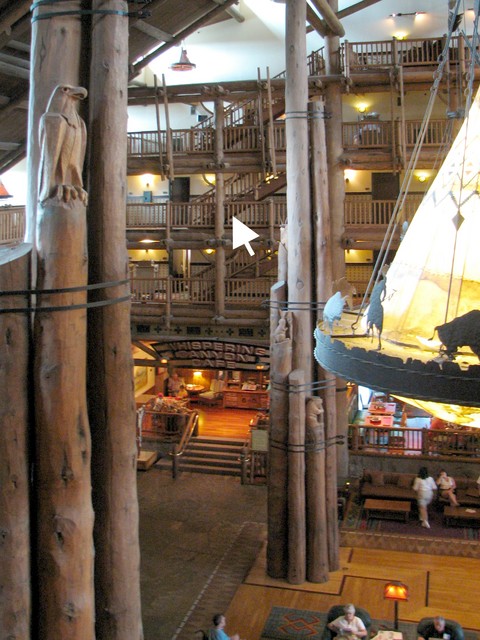 Narrow stairs add to the bunkhouse atmosphere of the lodge. Photo by Brian Bennett.

Way across the lobby from the check-in area and Mercantile is the Whispering Canyon Cafe. The Cafe is open to the lobby, so during the evenings when the restaurant crowds are fired up, the noise levels go up with them. 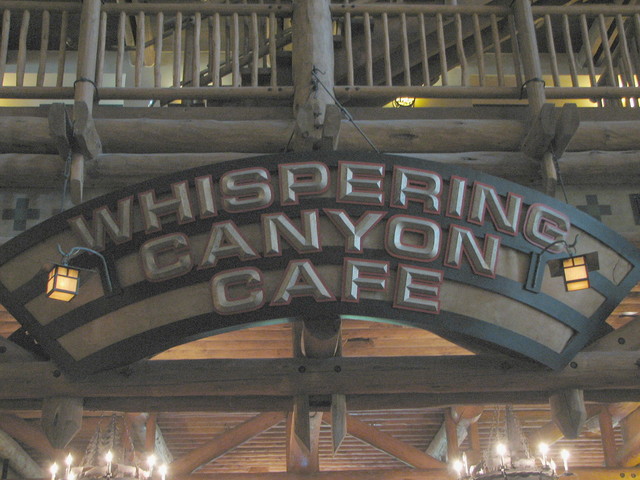 During crowded meal times, it's not at all unusual for the kids to be gathered together for a "horse race" (with all of the spectators twirling their napkins in the air to urge on their favorites). The servers here are prone to antics, too. 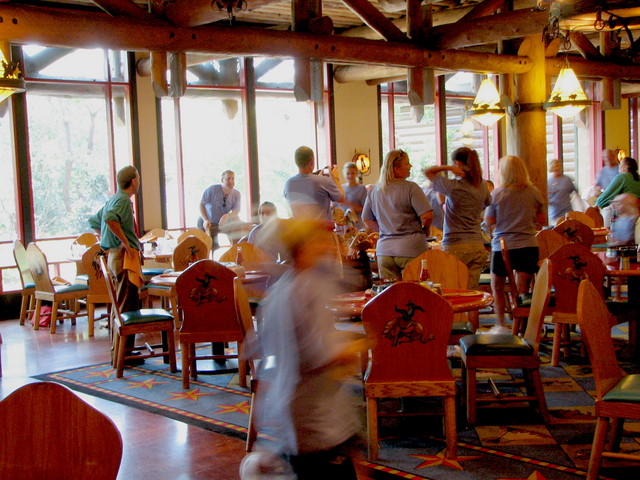 A pair of boys form a blur as they ride their wild stick horses through the restaurant. Photo by Brian Bennett.

This is a very entertaining restaurant with good and plentiful food. The family-style barbecue meal is served to your table on a central lazy Susan, so no one has to do much work to get whatever items they'd like to add to their plates. The meal is served with several different sauces which are fun to sample. 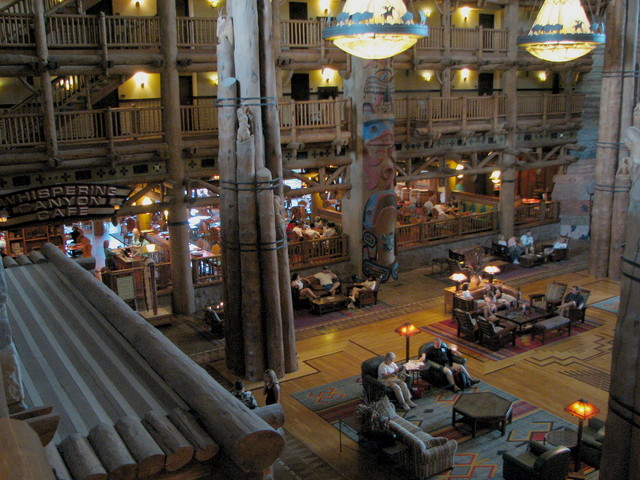 A view of the restaurant from across the lobby. Photo by Brian Bennett.

I wasn't able to take any photographs of the resort's premier restaurant, Artist Point, this trip. Unfortunately, a group was using the restaurant as a meeting room during the early afternoon hours when I was at the resort.

Artist Point specializes in wild game dishes including buffalo (North American bison, actually) steaks, duck, salmon, and so on. It's been a long time since I've had a meal here, but just thinking about that oak slab grilled salmon with maple glaze is making me hungry. 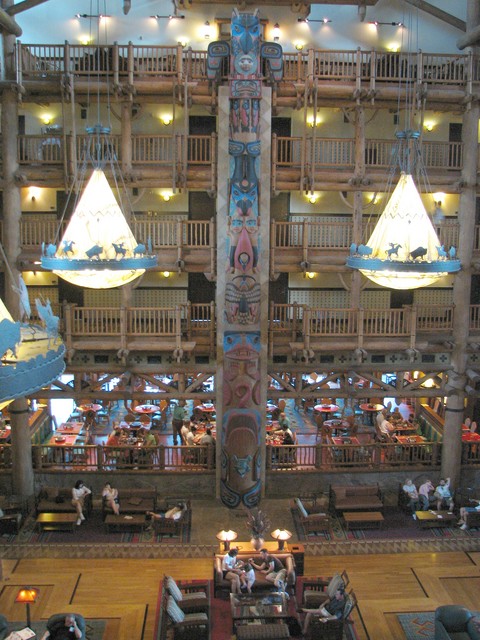 The north large totem pole in the lobby. Photo by Brian Bennett. 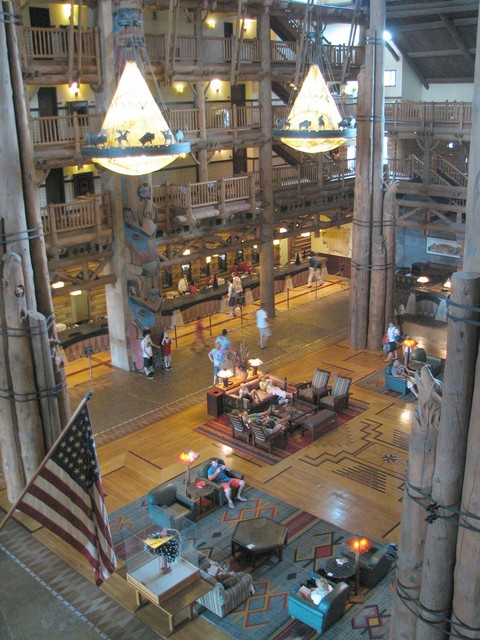 The check-in desk serves the next door Wilderness Lodge Villas, too. Photo by Brian Bennett.

But it's outdoors that Wilderness Lodge really captures that Western National Park feeling. Out behind the lobby, the U-shape of the lodge forms a quiet courtyard. It's really quite large, the word "courtyard" makes it sound much less impressive than it really is. 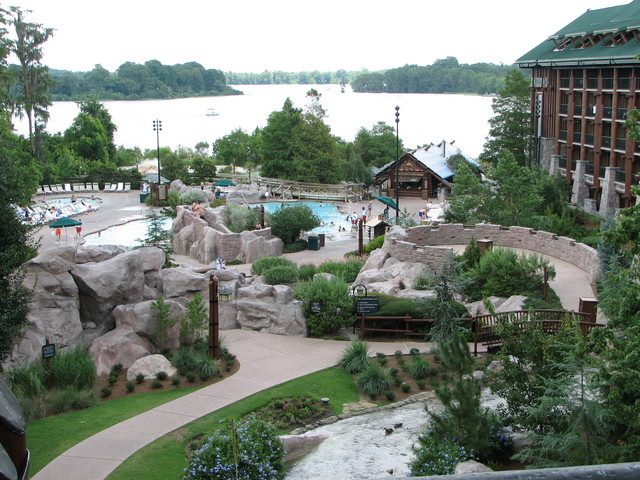 The main pool and overlook viewed from the third floor balcony. Photo by Brian Bennett. 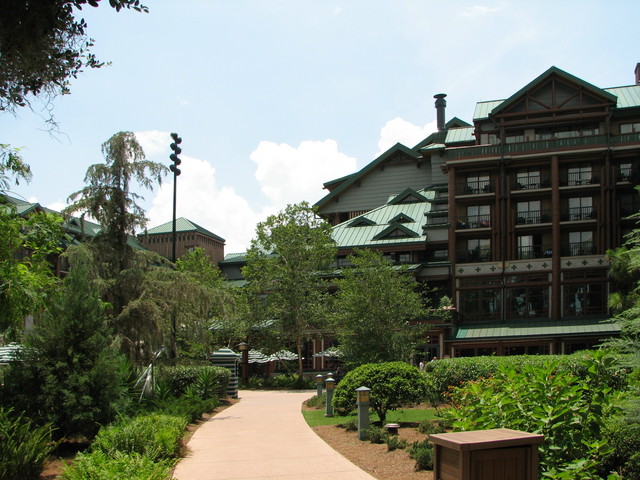 Reverse angle on the view... now we're looking back at the lodge from the courtyard. Photo by Brian Bennett.

Fire Rock Geyser puts on on occasional show, and provides a good explanation for the "hot spring" hot tubs that are available to hotel guests. 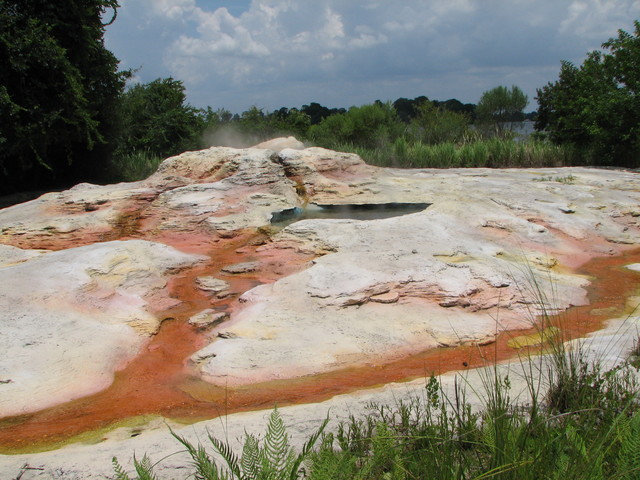 Fire Rock Geyser remains calm and I didn't have the patience to wait to see it blow. Photo by Brian Bennett.

The design of the resort, with the main lodge building wrapping around the central resort areas, allows for a very quiet, remote feeling. Even though the Contemporary Resort is just a few hundred yards north, it could be a thousand miles away as far as anyone in the lodge's pool is concerned. 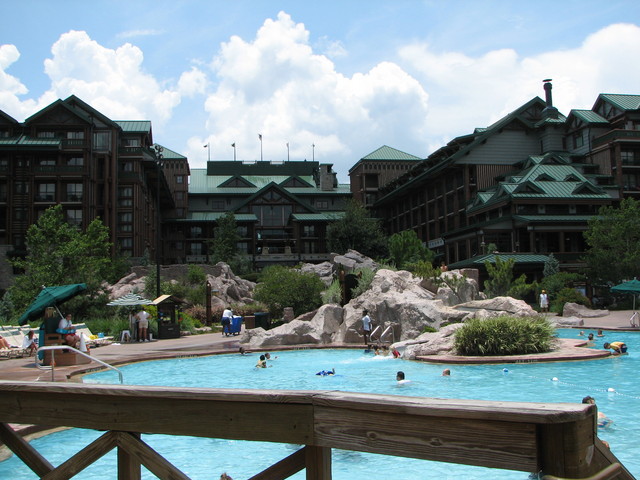 The pool is surrounded on three sides by the lodge's massive structure. Photo by Brian Bennett.

Trout Pass Bar does a brisk business in cool beverages during the hot summer months. Its location near the pool also makes it a great place for pool patrons to get a snack in the afternoon. 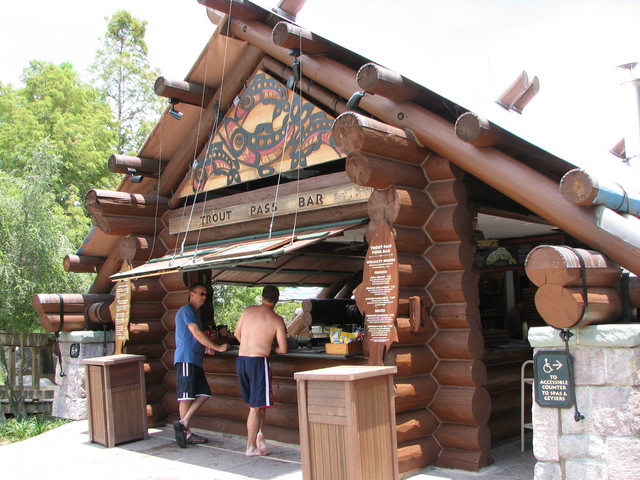 Trout Pass Bar is within a stone's throw of the pool's cool water. Photo by Brian Bennett.

Around the corner from Trout Pass Bar is the resort's beach on Bay Lake. Beyond the beach area you can see the marina, where guests can rent boats. 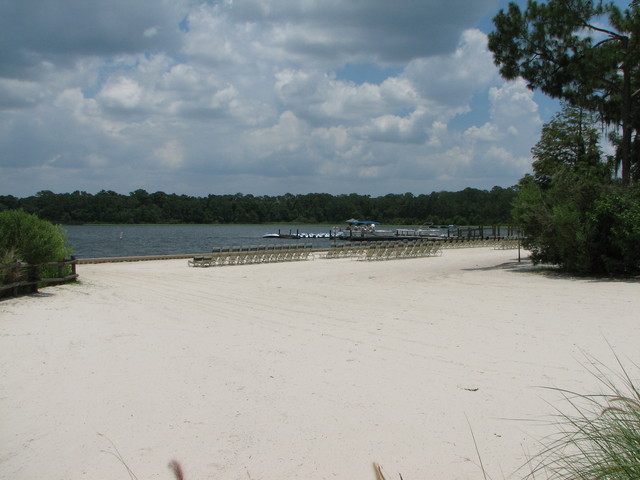 The lodge's beach is typically a quiet place, since no swimming is allowed in Bay Lake. Photo by Brian Bennett.

The falls form a small pool that flows, over some more rapids and small falls, into a larger pool—actually the lodge's swimming pool. A few photos down is a shot showing the "headwaters" of the creek. 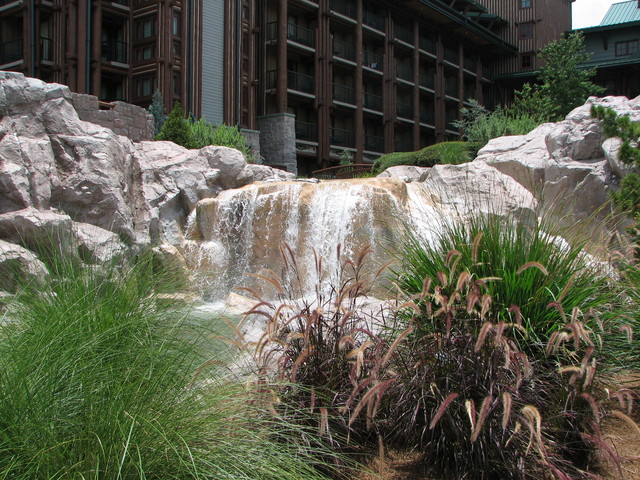 Silver Creek Falls adds a lot of atmosphere to the courtyard. Photo by Brian Bennett.

Roaring Fork is not far from the pool area. It has a somewhat larger set of menu options than Trout Pass Bar and includes a fairly large seating area. 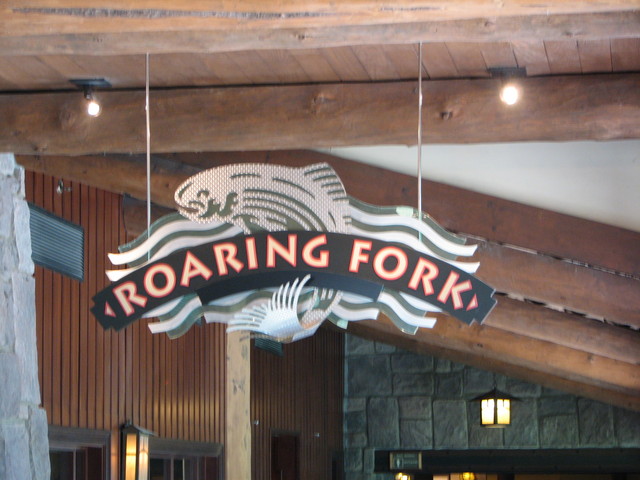 It's not at all uncommon for guests enjoying the pool to send one of their number here to pick up lunch and bring it back to the others. 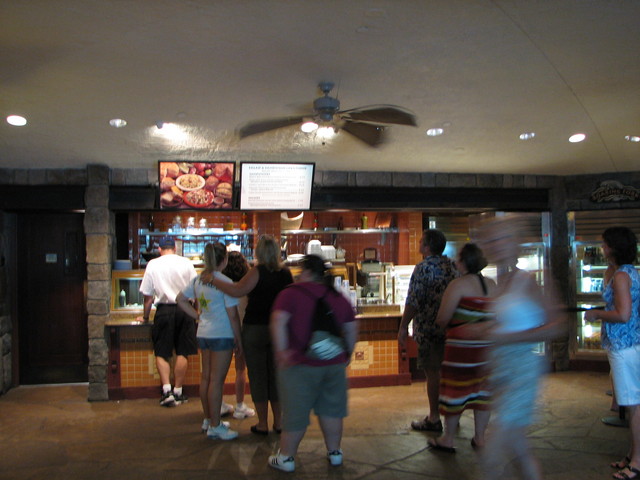 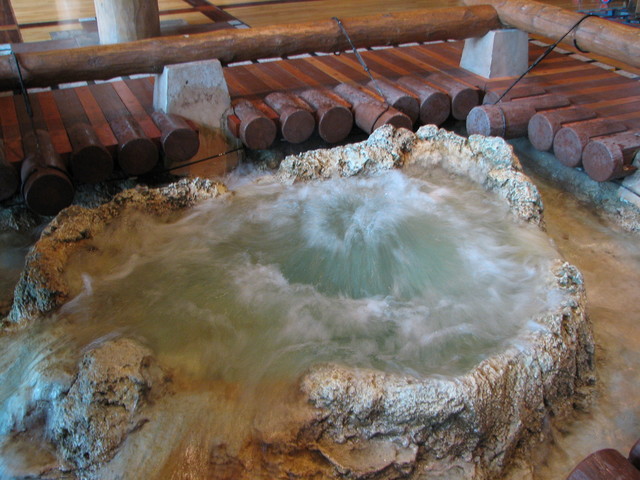 The headwaters of Silver Creek is inside the lobby. Photo by Brian Bennett. 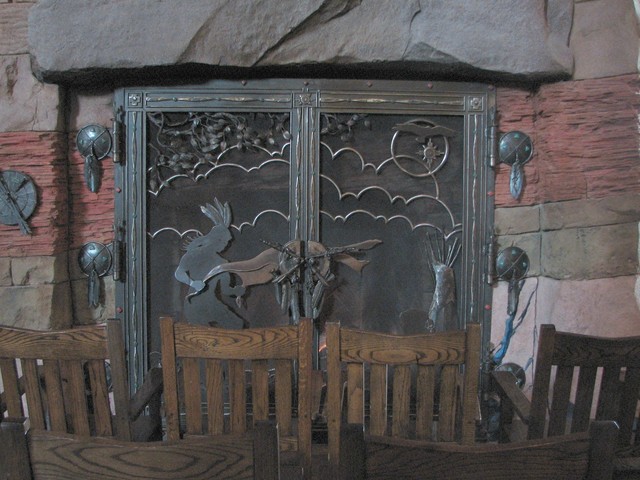 The lobby fireplace is a great place to keep warm, unless it's July and already ninety-four degrees outside. Photo by Brian Bennett.

Just beyond the check-in desk is the resort's mercantile. It's a relatively small store, especially since the Villas have just opened up on the complex and the number of guests here will be greatly augmented. The low ceilings make for a claustrophobic feel, but the intimate space does a brisk business peddling Lodge logo resort wear and other vacationer sundries and souvenirs. 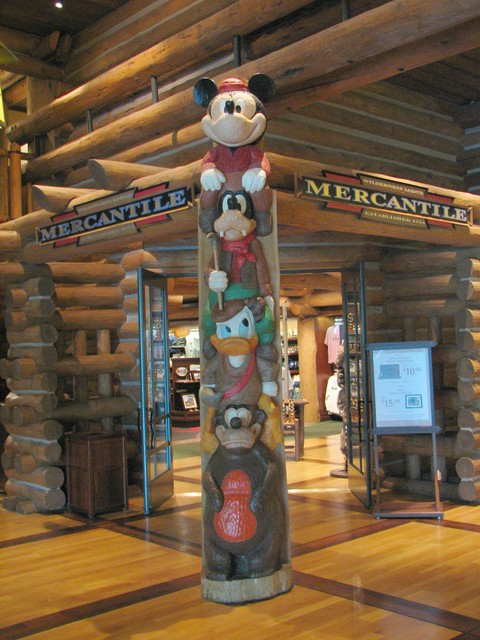 The Mercantile is a typical Disney resort store, but the decor is definately unique. Photo by Brian Bennett. 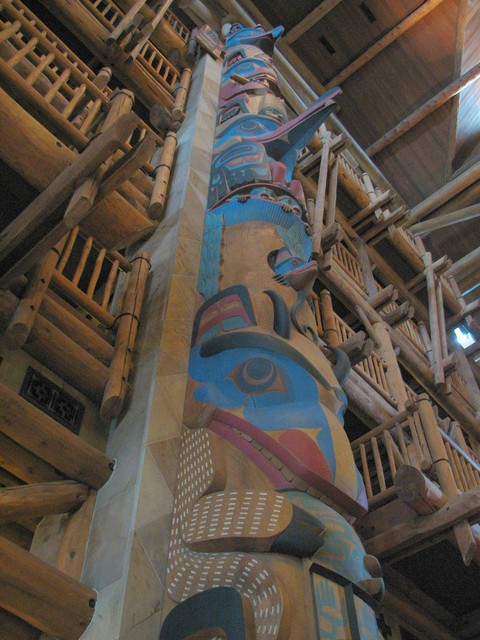 Looking up at the south totem on the lobby. Photo by Brian Bennett.