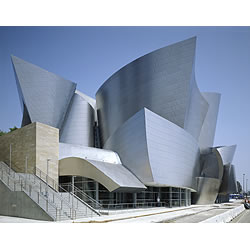 Already swelteringly hot at 9:00 a.m., a crowd of approximately 100 to 200 of Los Angeles' top movers and shakers fanned themselves while the key players in the construction and creation of the hall took their turns at the podium. Featured were Governor Gray Davis, Los Angeles Mayor James Hahn, Los Angeles County Supervisors Gloria Molina and Zev Yaroslavky, former Los Angeles Mayor Richard Riordan, and chief architect for the hall, Frank O. Gehry, among others. All highly praised the new auditorium and its importance in raising the cultural profile of Los Angeles. 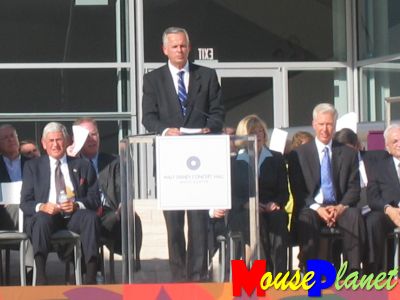 The event featured performances by the Los Angeles Master Chorale (“America the Beautiful”) and the Los Angeles Philharmonic Brass Ensemble, which performed a fanfare signaling the actual ribbon-cutting itself). 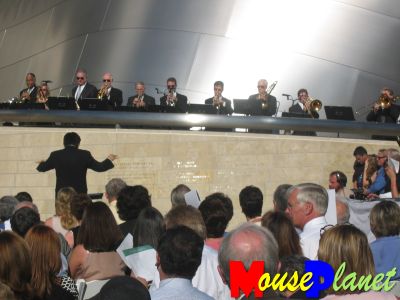 A highlight of the ceremony was Frank Gehry's personal recollections of working with Lillian Disney on the design of the concert hall. He described that when asked how she envisioned the concert hall's design, she replied she pictured brick cottages with thatched roofs.

Gehry related how Mrs. Disney loved flowers, gardening and music. When Gehry returned with the working model of the concert hall (with the soaring sail-like roofs), he joked that she went into cardiac arrest. He explained that she should try and think of the hall as a bowl of white roses. He told her, “I wanted to make a flower for you,” and said that he hoped he was able to after all. 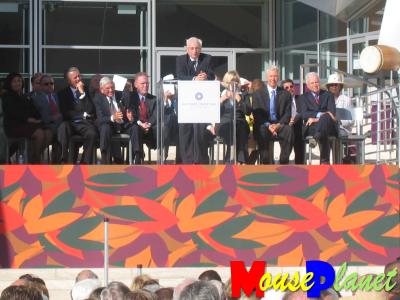 Gehry showed Mrs. Disney an interior model of the hall in 1994, with the upholstery on all the seats in a flower design, wanting to make it like a flower garden for her. He also mentioned the special “rose petal” fountain he designed for her (in the Blue Ribbon Garden area outside the concert hall), which was covered with broken pieces of blue and white Delft china, a favorite china design of hers. 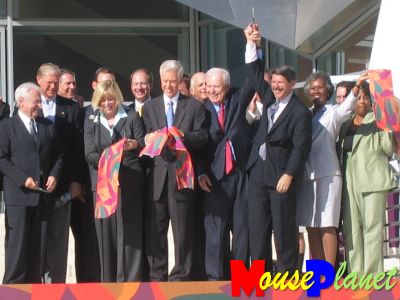 The ribbon has been cut, marking the official opening of the Walt Disney Concert Hall. Photo by Sheila Hagen.

After the speakers had taken their turns, the ribbon cutting commenced, followed by a grand finale of taiko drummers, ribbon-twirling dancers and children from the San Jose Elementary School dancing on stage. 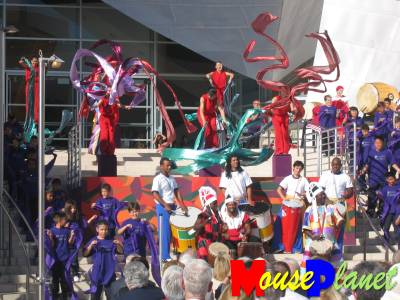 Finale of the Dedication Ceremony. Photo by Sheila Hagen.

The event ended with a giant explosion of confetti streamers on-stage. 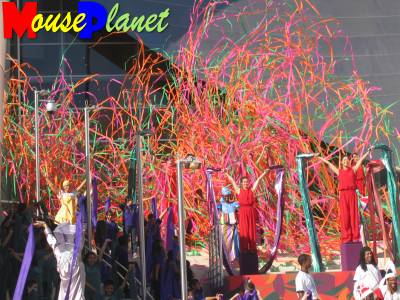 Confetti marks the end of the event. Photo by Sheila Hagen.

The hall was conceived by Lillian Disney in 1987 as a tribute to her husband, Walt, in addition to providing a new home for the Los Angeles Philharmonic. Now in any Disney theme park ride, the story always starts out happily but soon something goes terribly, terribly wrong. And so it was with the roller-coaster history of how the Walt Disney Concert Hall finally came to be completed.

Mrs. Disney initially donated $50 million towards the construction of the concert hall—a huge amount to be sure—but by the end of the construction, the final cost totaled a $274 million instead of $100 million as originally estimated.

Once Frank Gehry was selected as the chief architect and the proposed plans submitted in 1991, the project broke ground in 1992. Unfortunately, a business recession deepened and, coupled with the after-effects of the Rodney King riots in 1992, costs for the project began to escalate as Gehry reworked his architectural plans to accommodate design changes.

Gehry, by this time no stranger to working on Disney projects—his design firm, Gehry Partners, designed in 1995 the Team Disney Administration Building and the Disney ICE skating rink in Anaheim—was completing a similar project in Bilbao, Spain, that earned him world-wide acclaim.

By 1995, the projected costs for the building zoomed to $265 million. Los Angeles County officials quickly threatened to pull the plug unless an additional $52.3 million was raised in the next two years. Construction was halted for five years.

During the corporate fundraising period, Eli Broad attempted to hire a new design firm (not Gehry's) to produce the construction blueprints. Upon hearing of this, Gehry threatened to leave the project, and only through the intercession of Diane Disney Miller (the daughter of Walt and Lillian) and her use of the final $14 million of her mother's bequeathment as leverage, was the conflict finally resolved.

A few months later in December 1997, Mrs. Disney died at the age of 98, 10 years after her initial donation but before she could see her tribute completed. At this point, the Walt Disney Company announced they were donating $25 million. This was not only the first donation from the Disney company but the first donation from the entertainment industry as well. There was considerable reluctance amongst other entertainment corporations regarding contributing to a project bearing a competitor's name.

As part of the terms of Mrs. Disney's gift, a performance space was created at Disney Hall for use by the California Institute of the Arts (an fine-arts college Walt Disney help to found), called the Roy & Edna Disney/Cal Arts Theater (or “REDCAT,” for short).

By 1998, enough funds had been raised to commence construction on the hall itself. During this time, Gehry changed the exterior design from the original limestone specification to titanium, then to stainless steel.

December 1999 saw the second (and final) groundbreaking ceremony with the hall finished by October 2003. The final amount of the Disney family's gift (including contributions from Roy E. Disney) to fund the project totaled over $100 million.

The hall itself is an architectural wonder. The exterior of the hall is clad in stainless steel and was designed to look like a ship with its sail at full mast, creating the feeling of traveling along a ceremonial barge to music. The Blue Ribbon Garden, designed as a tribute to Mrs. Disney, features a hand-sculpted fountain in the form of a rose as the garden's centerpiece. The fountain, named “A Rose for Lilly,” was designed by Gehry and is covered in a mosaic of approximately 8,000 broken pieces of the blue and white Delft china so endeared by Mrs. Disney.

The interior of the 2,265-seat auditorium features natural lighting with the audience surrounding the orchestra stage. The walls and curved ceiling are made out of Douglas fir in order to provide the warmest possible natural sound and acoustic intimacy. Gehry collaborated with Yasuhisa Toyota from Nagata Acoustics to ensure that the curved design of the interior would produce better sound reflection. 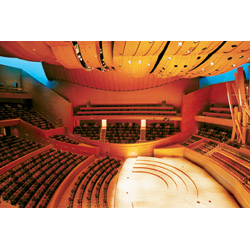 A 6,125-pipe organ located at the rear of stage is scheduled to debut a year from now. The floral patterned carpet and upholstery was designed by Gehry, who named it the “Lillian” design.

In order to create a venue that did not look like any other concert hall built in the last 25 years, Gehry insisted that there be no chandeliers. 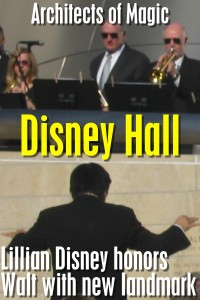 The public is invited to enjoy a free self-guided tour of the concert hall from November 1 through November 29 (except matinee days) from 9:00 a.m. to 1:00 p.m., on a first-come, first-served basis.

Beginning December 1, guests can take a 45-minute, self-guided audio tour of the building, which is narrated by actor John Lithgow. Tickets ($10 for adults, $8 for students and seniors) and reservations are available starting November 1, 2003 by phone at (323) 850-2000, online at Ticketmaster, or in person at the Walt Disney Concert Hall Box Office.

Additionally, the WDCH is now home to the Library of Congress/Ira Gershwin Gallery. The inaugural exhibition will feature music and architectural collections highlighting the City of Los Angeles' contributions to American music. The exhibit opens October 23, 2003 and runs indefinitely.

The concert hall is located at the Music Center, 135 North Grand Avenue, Los Angeles, CA 90012, with the hall itself at First Street and Grand Avenue. General information may be obtained at (213) 972-7211 or at their Web site.