During World War II, everything seemed to be a bit topsy-turvy. Nowhere was this more evident than in animation where Adolf Hitler was depicted as a vulture and cartoon “gremlins” from the Kremlin protected Moscow from the Nazi invasion. Crazy? Not if you were at Disney, Warner Bros., MGM or Columbia/Screen Gems. 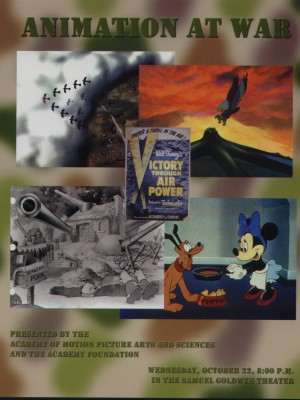 The program for the Animation at War screening. Image courtesy of the Academy of Motion Pictures Arts and Sciences.

In the wake of Pearl Harbor in 1941, the U.S. government asked for Hollywood's aid in promoting patriotism, creating informational films for military personnel and even telling those on the homefront that they could support the war effort by saving bacon fat.

Those films, and their historic significance, brought animation lovers—and the men and women involved in their creation—to the Academy of Motion Picture Arts and Sciences in Beverly Hills on Wednesday, October 22 for “Animation at War.”

Among the animators in the audience who were recognized for their contributions were Paul Sommer, who animated several shorts for Screen Gems; Ed Friedman (director of the He-Man and She-Ra cartoon series) who also worked for Screen Gems; Alice Davis, wife of Disney legend Marc Davis (one of Disney's Nine Old Men and who contributed animation for “Victory Through Air Power"); and Bill Justice, who was worked on more than 60 Disney films, including “Victory Through Air Power” and the “Spoonful of Sugar” sequence in Mary Poppins.

The audience was treated to six animated shorts (one longer and five shorter)—some of which have not been out of the vault in several decades. In addition to the screen, a question-and-answer session moderated by animation film historian Jerry Beck, featured film critic Leonard Maltin; former ink-and-paint girl Martha Sigall, and Disney animator David Bossert. Disney legend Joe Grant, who was scheduled to be at the panel, was unable to attend, but an interview with him will be included in the soon-to-be-released Walt Disney Treasures DVD, “Walt Disney On the Front Lines,” tentatively scheduled to be released on December 2, 2003. 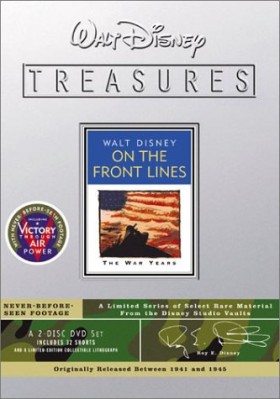 Jerry Beck provided an introduction for each film, relating interesting facts about them. As an introductory disclaimer, he noted that although some characters may seem harsh,. they were meant to be caricatures and that the shorts were not aimed at children but to a general audience. On “Song of Victory,” a Screen Gems [now Columbia] productions, Beck pointed out how the letter “V” was used repeatedly in the various scenes.

For Disney's “Out of the Frying Pan Into the Firing Line,” Beck noted that there was a portrait of Mickey Mouse in uniform and that this instance was the only time during all of World War II that Mickey was so shown. This three-minute short extolled the virtues of saving cooking fat so that bullets and other munitions could be produced in the war effort.

One of the main animators for Disney's “Reason and Emotion” was Ward Kimball. He had a huge influence on this Oscar-nominated film, which argued that reason should be used to defeat the Axis powers because Hitler used emotions to increase Nazi power. Kimball used his own likeness for the Caveman character (emotion), and Kimball's trademarked horn-rimmed glasses adorned the Reason character.

“Russian Rhapsody” was based on the Roald Dahl novel, “The Gremlins,” and although Disney wanted to do the project, they abandoned it when Warner Bros. developed their own version. “Russian Rhapsody” featured the wacky animation of Bob Clampett and the voice of Mel Blanc for Hitler. Scores of Russian-accented gremlins attacked a plane piloted by Hitler in an effort to defend their Russian homeland.

“The Blitz Wolf” cartoon was the famed Tex Avery's first cartoon at MGM. It features Avery's frequently appearing cartoon wolf character as a thinly disguised Hitler and the Three Little Pigs as his foes. 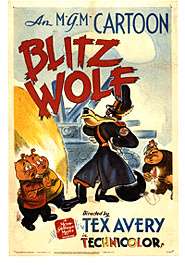 The finale of the screening was Disney's “Victory Through Air Power,” based on the book by Alexander P. de Seversky, detailing how air power was the Allies' only hope in beating the Axis powers whose supply chain was almost unbreakable. The opening Wright Bros. animation featured the whimsical characters of Ward Kimball while the finale featured animation by Marc Davis.

After the screening of the six animation features was a question-and-answer session featuring many stories about Hollywood's contribution to the war effort that are not generally known. The following are some notable views and exchanges from the panel members:

On “Victory Through Air Power”

David Bossert: “Victory Through Air Power” was the precursor to the look and feel of the 1950s show, “The Wonderful World of Disney". It featured segments of Seversky talking to the audience with graphs and charts, which would be how Walt Disney introduced his show. He also pointed out that “Victory Through Air Power” was the missing link between the animation of pre-WWII and the post-war ambitions of Disney... The Disney studios located near the Lockheed plant in Burbank, they filmed live action features at night because the soundstages were not that quiet.

Leonard Maltin: Disney was not really equipped at the time for live-action. They were an animation studio and did not have to worry about it.

Bossert: Disney tried to get a copy of “Victory Through Air Power” to Franklin D. Roosevelt, but Roosevelt's chief of staff was a Navy guy and it never got to him. So, while FDR and Winston Churchill were in Quebec attending a conference, a print was rushed up there for FDR and Churchill to see it.

Maltin: It changed FDR's way of thinking - he agreed that Seversky was right.

Bossert: They were planning D-Day at the conference and it had an impact on the end of the war.

On types of war cartoons

Maltin: Everyone signed up for the war. One of my favorite pieces shows Popeye, who became an actual sailor. Pearl Harbor occurred in December 1941, so there was a time lag before the films could be produced and released. There were two types of animation: one, morale-building and two, let's make fun of them. Prior to Pearl Harbor, Hollywood had a hands-off attitude about the war.

Bossert: The Donald Duck cartoon, “The New Spirit,” was a terrific cartoon. Walt agreed to do the cartoon and they got it out in six to seven weeks. The Secretary of the Treasury had to go to Congress to get funds to pay Walt. Some Congressmen thought Walt was trying to be a war profiteer. Despite the obstacles, Walt even agreed to do a follow-up sequel.

Maltin: The purpose of “The New Spirit” was to inspire Americans to pay taxes on time—and gladly—because this was the money that would help us win the war. And it worked! Taxes had never been filed so promptly.

The panelists pointed out that many of the animation in the war-themed cartoons were recycled from other cartoons. The “fat” in “Out of the Frying Pan” was actually the whirlpool from “The Sorcerer's Apprentice,” while scenes were used from “Bambi” for fire and rain sequences.

Martha Sigall: The day after Pearl Harbor, we heard FDR talk about the day that would live in infamy. Leon Schlessinger got a contract for doing “Private Snafu” (military jargon for “situation normal, all fouled up”). The FBI fingerprinted everyone. The FBI even asked our neighbors if we were loyal Americans. We were only given 10 cells at a time to work on.

Maltin: Disney did training films for bomb sites, which were classified top-secret. The logistics of making films were really difficult

Bossert: One group would do one segment at a time. No one ever knew what the full project was.

On women and the war

Sigall: We [Warner Bros.] did a short “Point Rationing of Foods” to show housewives how to ration. I never saw that picture.

Maltin: Everybody really pulled together in an amazing way for the greater cause. Working nights. Working on something just because you believed in it.

Sigall: In 1943, I was promoted to camerawoman doing training films for the Navy. There were no women in the camera department. But the Cameraman's Union gave me a work permit. But I was told that as soon as the war was over, my permit would be revoked. And on V-J Day, August 14, 1945, we all lost our jobs. Then there was a telephone call revoking my work permit.

On animation in conflicts after WWII

Beck: Did animation play a part in Korea and Vietnam?

Maltin: Fairly short answer? No. Victory through “police action"? [laughter from audience] The mobilization wasn't there. In “Victory Through Air Power”, there was no feeling of Walt's presence in the movie—but it was his movie. Every studio made tremendous contributions: at Hal Roach studios (known as Fort Roach as it was occupied by military personnel), Darryl Zanuck, Jack Warner. Walt was unable to do commercial work because of the war.

Bossert: “Victory Through Air Power” broke even or lost money when it was released.

Maltin: It was courageous and foolhardy for Disney to do. He probably stole animators from other projects.

Bossert: The Axis powers tried to use animation as well. Japan and Germany did a bunch of animation films. Goebbels (Hitler's propaganda minister) got prints of Disney cartoons to show to Hitler. Hitler felt Germany could produce animation just as well as Disney.

Maltin: The military moved onto the Disney lot during the war. Disney created over 200 war pieces. One Navy training film had 38 parts.

Bossert: Disney even made a film on VD (veneral disease) as an Army training film. He also had a military officer live in his studio office for four months.

Maltin: The Roach studios contributed too.

Sigall: But everything at the Roach studios was destroyed and buried after the war. During the war, the army personnel stationed at the Roach studios drove home at night because there was no room. And Hal Roach's mother, who lived on the lot, refused to leave; she had a victory garden.

Beck: Bugs and Popeye were also popular because they represented the U.S. attitude at the time.

Maltin: Everyone who came to Hollywood wanted to meet Walt Disney. He was like royalty. H.C. Potter [the director of “Victory Through Air Power”] had to help Seversky be comfortable in front of the camera since at that point no one really talked to the camera in that way.

When asked by an audience member why “Victory Through Air Power” has not been shown since the war, Leonard Maltin responded:

The studios are afraid to offend anybody. We live in an era where everyone gets offended. When the “Bugs and Daffy Go To War” video was released, there were some cartoons they still couldn't put out. A Japanese woman deeply offended by the cartoon “Bugs Bunny Nips the Nips” complained to Warner Bros. Warner Bros. pulled the video from distribution. The studios don't want to be charged with being racist, sexist, etc. Everybody is hyper-sensitized. The studios don't want to offend people no longer their enemies. Now, we are releasing them today with the proper introduction and proper warnings so that kids won't be scarred for life. 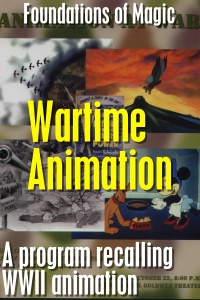 “Animation at War” was a presentation by the Motion Picture Academy of Arts and Sciences, and it highlighted some of Hollywood's most notable war animation

The screening and panel discussion were held Wednesday, October 22, 2003 at the MPAA’s Samuel Goldwyn Theatre at Wilshire Boulevard in Beverly Hills. Program:

Walt Disney Treasures — On the Front Lines is being released on Tuesday, December 2, 2003. Regularly priced at $32.99, you can purchase a copy from Amazon for 30 percent off at $23.09. Order your copy from Amazon via this link.

This release includes “On The Front Lines” – a first-ever, DVD set featuring many of the Disney-animated training, propaganda, and educational films that Walt Disney’s team created for the Armed Forces during World War II.

Including shorts with Mikey and Minnie Mouse, Goofy, Pluto and more, the DVD release also includes “Victory Through Air Power,” a rarely seen propaganda film that Walt is said to have considered his studio’s greatest contribution to the war effort.